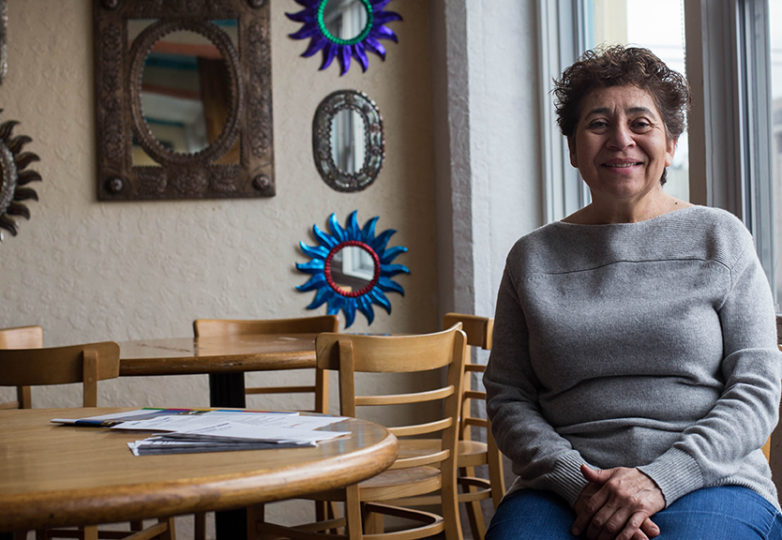 Nati Ramirez, of Don Ramon’s Restaurant, speaks about why it’s important to be a sanctuary restaurant. Nati was born from immigrant parents and was the only one of their children born in the United States, March 20, 2017, San Francisco, CA. Photo: Jessica Webb 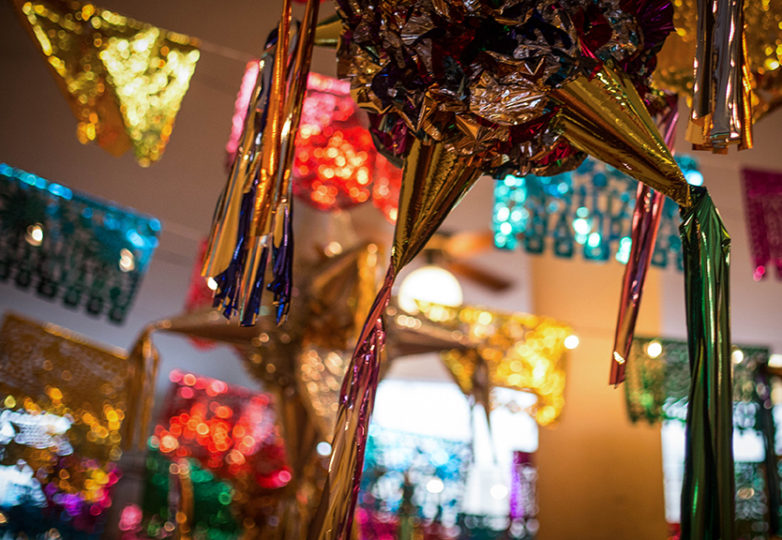 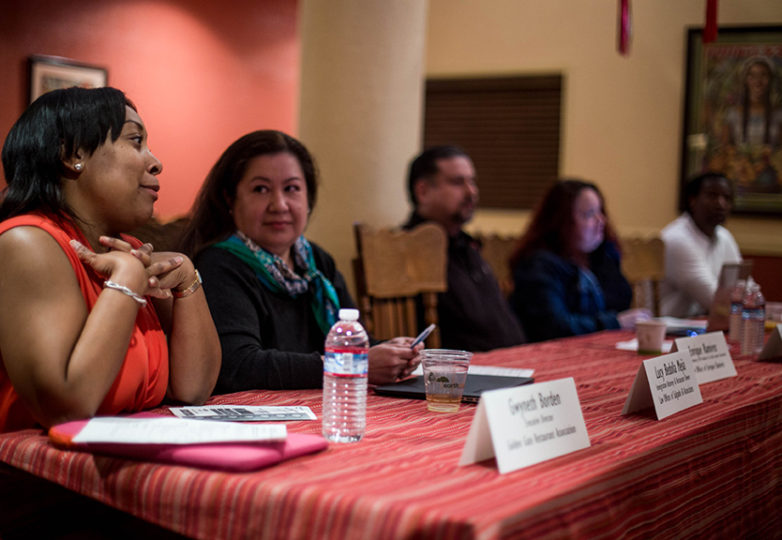 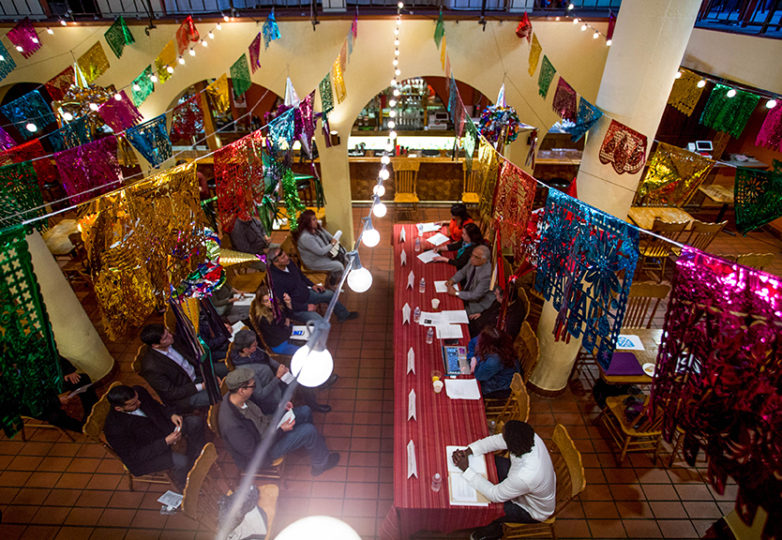 Sanctuary Restaurants workshop attendees take notes while they receive legal advice from the panel about how to handle situations if Immigration and Customs Enforcement (ICE) shows up at their restaurants, March 20, 2017, San Francisco, CA. Photo: Jessica Webb 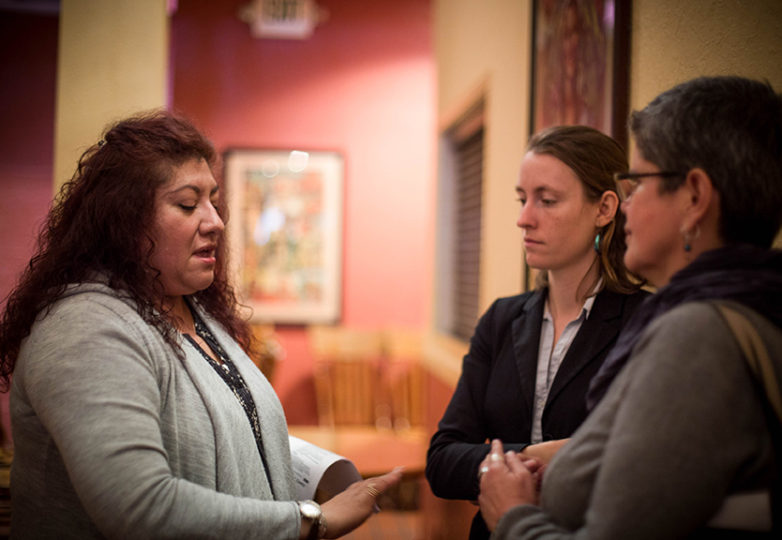 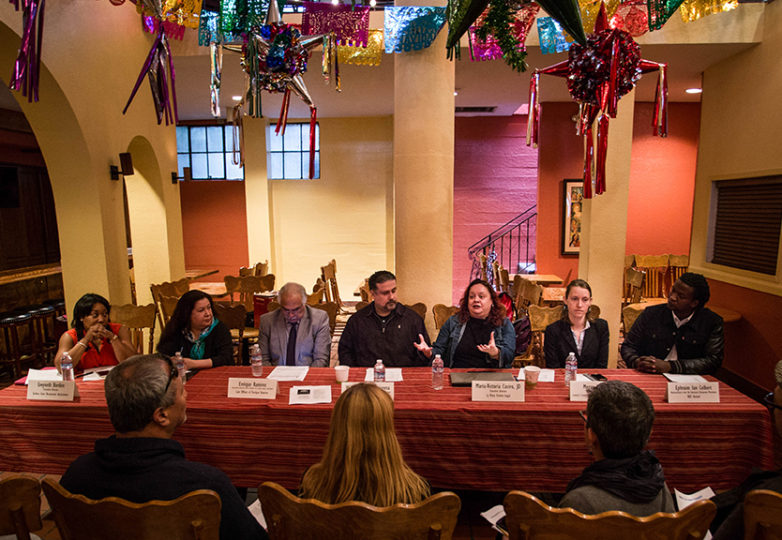 “You have to make sure your employees feel that they aren’t going to be attacked,” said Nati Ramirez, who owns Don Ramon’s on 11th Street, the restaurant her immigrant father Ramon opened in 1982.

Before opening his restaurant, Ramon, who immigrated in 1955 from Ayutla, Jalisco, Mexico with his wife Guadalupe, worked picking lettuce in the vast fields of California’s central valley. Nati remembers her father’s stories of how he would hide in fear in the large field tubes during immigration raids.

Today, many of Nati’s employees also live in fear of Immigration and Customs Enforcement (ICE), but she tries reassure them to be hopeful.

“You have to remember that the president can’t change everything in a blink of an eye … and ICE just cannot come in,” she tells them.

Last month, the Golden Gate Restaurant Association (GGRA) joined Sanctuary Restaurants, and on March 20 at Don Ramon’s, it hosted the first in a series of free workshops designed to educate and train small business owners and restaurateurs about how to prepare their employees and guests for potential raids and other possible harmful immigration policies.

“Our immigrant community is the backbone of that industry,” said Gwyneth Borden, executive director of the Golden Gate Restaurant Association (GGRA). “Restaurateurs are immigrants; restaurant workers are immigrants; these issues are very critical to us.”

Sanctuary Restaurants isn’t a legal designation, but the San Francisco chapter has teamed up with various members of the civil rights legal community.

Megan Sallomi, an attorney with the Lawyers’ Committee for Civil Rights who specializes in immigrant justice, was one of the panelists at the March 20 workshop.

“The Sanctuary Restaurant movement is a response to fight back against a climate of fear and hate that’s coming from Washington. And that fear is paralyzing, and it’s having severe human consequences and economic consequences,” Sallomi said.

In addition to participating in the workshop, the Lawyers’ Committee for Civil Rights also defends immigrants during deportation proceedings and helps them obtain legal status. During the panel, Sallomi spoke about the rights and responsibilities of small business owners and how they can protect their employees to the fullest extent of the law.

“Whenever we hear about increased ICE enforcement, there is always a risk that businesses are going to start discriminating against people for unlawful reasons,” Sallomi said. “Obviously from a legal perspective, you can’t hire someone who doesn’t have authorization to work here … but what we don’t want to see is businesses and employers start to discriminate against people because of their accent or their national origin, or their beliefs about them that may or may not be verified.”

Unauthorized immigrants accounted for approximately 9.4 percent of California’s workforce (or 1.8 million workers) in 2012 according a report by Pew Research.

In a separate study, Raul Hinojosa-Ojeda, associate professor at UCLA, and Marshall Fitz, senior fellow at Center for American Progress, found that were “all unauthorized immigrants removed from California, the state would lose $301.6 billion in economic activity,” and that the total number of employed people would drop by 17.4 percent. They also reported that conversely if unauthorized immigrants in California were legalized, 633,000 jobs would be added to the economy, and tax revenue would increase by $5.3 billion.

Even though it’s against the law to hire someone who isn’t authorized to work in the United States, many employers do anyway.

Immigration attorney and former president of the San Francisco La Raza Lawyers Association Enrique Ramirez, explained the difficulty employers have in verifying whether their applicants are authorized to work in this country.

“There’s too many requirements,” he said. “There’s too many double checkings. Sometimes they’re required to check with CIS [Citizenship and Immigration Services] or ICE directly, and that information in and of itself is not current.”

Ramirez, whose parents were immigrants, said the world has changed to become more interconnected and that explains the current demographics of the workforce in the restaurant industry.

“This is the new America,” he said. “We have to look down south to our neighbors who have suffered quite a bit because of our own economic policies, and our own political policies, and that has fueled immigration into the United States.”

The GGRA’s affiliation with Sanctuary Restaurants and ongoing workshops have also received recognition and support from Assemblymember David Chiu.

“Our city, our state, our country is facing an existential threat about who it is that we are. We are a city and country that was founded by immigrants,” Chiu said. “But we have a president, and we now have immigration agents, who have forgotten that.”

“We as immigrants have held numerous business here in San Francisco,” Nati said. “We aren’t just the gardeners, we aren’t just the baby sitters, we’re not that immigrant that just comes and does menial chores. We educate ourselves, and we continue on with our dream.”