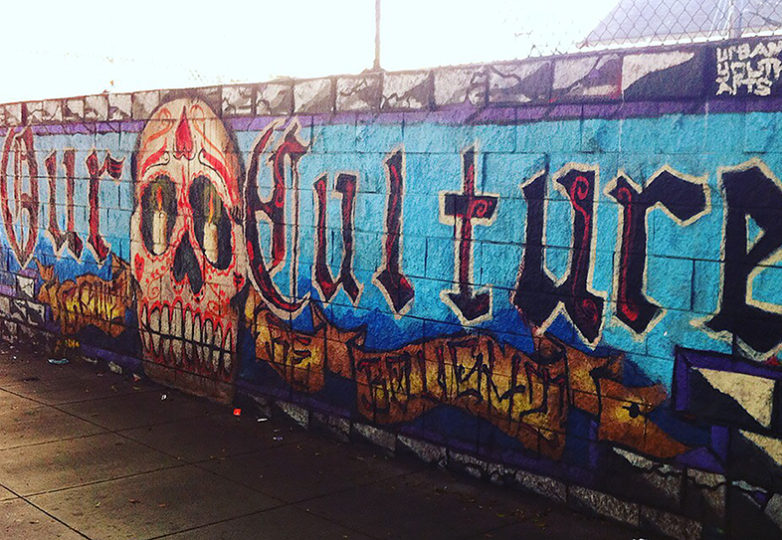 The Precita Eyes mural “Our Culture can’t Be Bought,” originally painted in 2015, was whitewashed by artists working for the property’s owner on June 2, 2017. Photo Anya Montiel 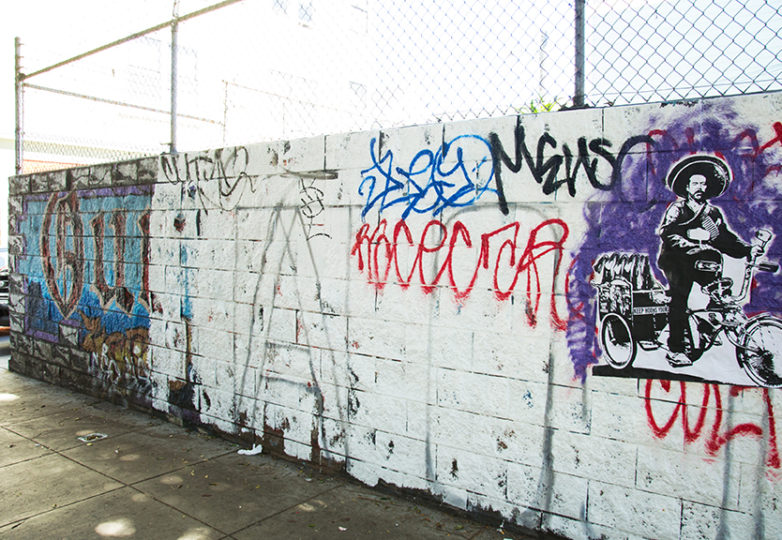 The mostly whitewashed mural on the 24th Street facing wall of the former Parrilla Grill on 24th and Folsom, as it appears on Wednesday June 14. Photo: Mabel Jiménez 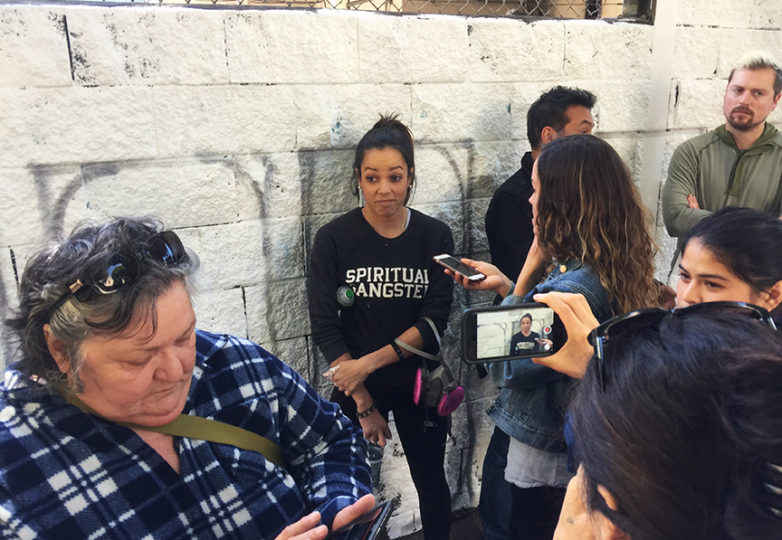 Artist KiriLeigh Jones, who was commissioned by property owner Ali Rismanchi to paint the “Be a Good Person” mural, stands in front of the destroyed “Our Culture Can’t be Bought” Precita Eyes youth mural on June 2, 2017. Photo: Josué Rojas 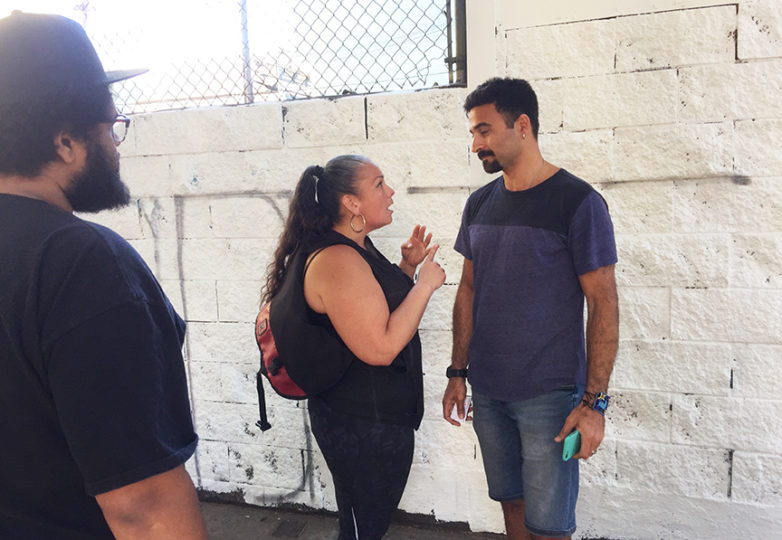 Mission resident and community activist Nancy Pili Hernandez has words with Ali Rismanchi, the owner of the building on which the “Our Culture Can’t be Bought” mural was destroyed. Photo: Josué Rojas 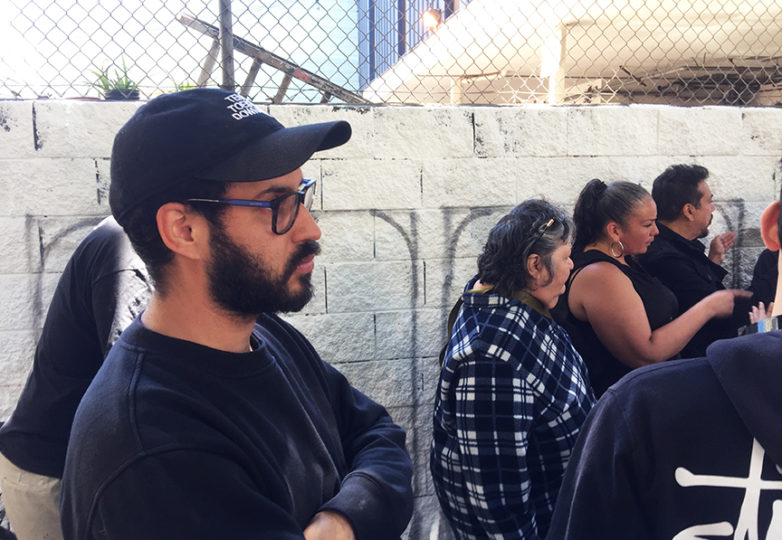 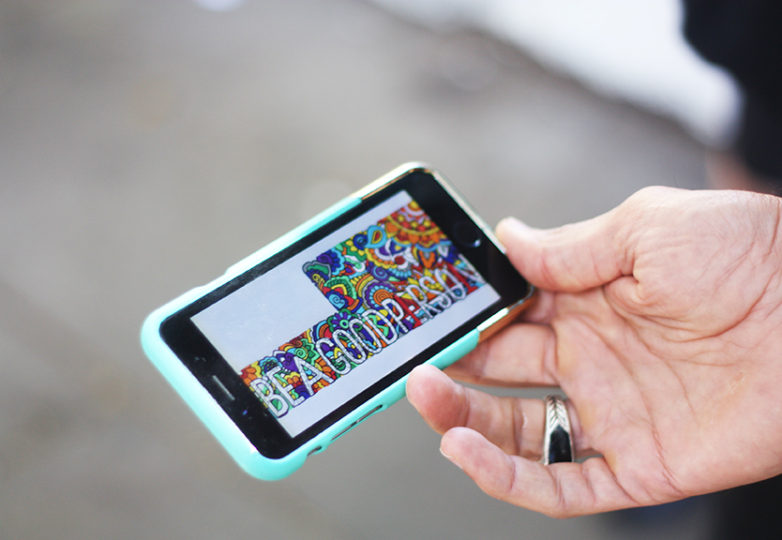 Property owner Ali Rismanchi shows reporters and community members a design of the “Be a Good Person” mural that was intended to go over the Precita Eyes Youth “Our Culture Can’t be Bought” mural on June 2, 2017. Photo: Alexis Terrazas 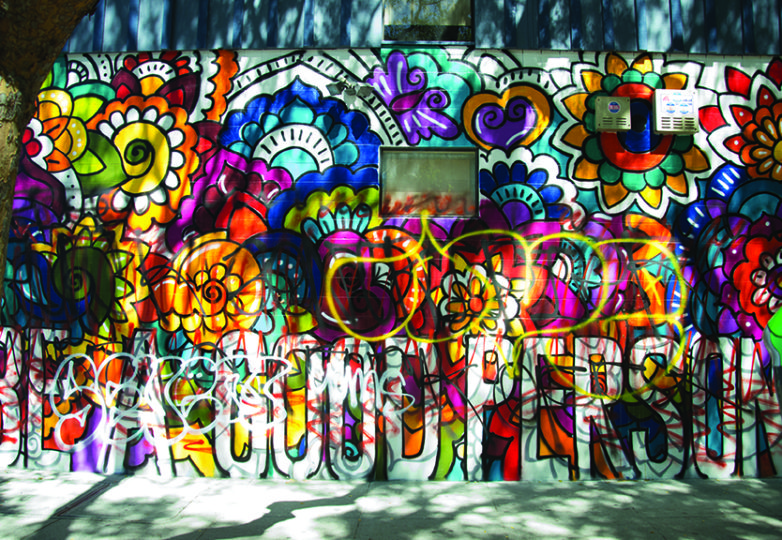 The new mural, which reads: “Be a good person” was tagged after being completed. Photo: Mabel Jiménez

The conflict surrounding the Precita Eyes mural that was literally whitewashed by artists commissioned by the building’ owner on June 2, is being resolved.

The exact details have not yet been made public, but after Precita Eyes’ Founding Executive Director, Susan Cervantes, met with Ali Rismanchi, the owner of the building at 2801 Folsom St. on June 7, it was agreed Precita Eyes will develop a new mural at the site.

Many in the Mission community were outraged to learn that the Precita Eyes youth mural on 24th Street (near Folsom Street), which had depicted a calavera with the words “Our culture can’t be bought,” had been buffed beyond recognition with white paint, leaving only a sliver of its original form.

“I wanted something colorful on this, frankly. I’m a fan of colors—bright colors. This wall for me was way too dark,” Rismanchi said on June 2.

The new design was intended to read: “Be a good person,” a slogan which is associated with a clothing brand of the same name.

Rismanchi arrived on scene when the crowd began to grow. Several community members, including Mission activist Nancy Pili Hernandez, told Rismanchi that whitewashing the mural was disrespectful to the neighborhood and to the youth who painted.

“I didn’t know I had to go through these processes… to redo the mural,” Rismanchi said, in his defense. ”At this time, it’s done… this wall is yours.  It’s the neighborhood’s. Make it colorful.”

The “processes”  Rismanchi claimed not to be aware of involve specific laws in place to protect murals.

“To go and paint over [the mural] is flat out a violation of federal law,” said Brooke Oliver, founding attorney of 50 Balmy Law P.C., who has represented Precita Eyes and muralists.

When asked if that applied to this incident, Oliver said: “Absolutely.”

Oliver explained that in the United States, protections for such a mural are specified in the federal Visual Artists Rights Act (VARA).

“Basically, VARA says that an artist has the rights of integrity and attribution in an original work of art. Attribution is simply to be credited,” Oliver said. “Right of integrity is to have it remain whole, that [it] is illegal under federal law for anyone to deface or modify an original work of art without the artist’s permission. There are some specific rules that apply when a piece of art is affixed to a building, as with this case.”

Oliver explained that  a building owner can destroy a mural, but they must give the artist written notice and the opportunity to remove the mural from the wall at the artist’s expense. That statutory notice grants the artist 90 days to do that, and  applies to almost every wall.

The artist at the center of the controversy is KiriLeigh Jones, who was hired by Rismanchi to paint her “Be A Good Person” over the “Our Culture Can’t be Bought” mural.

In an email to El Tecolote, Jones expressed her empathy and claimed that she painted over the mural thinking that she had proper permission to do so.

“It was really unfortunate for everyone involved. To members of the community who were affected, I’m empathetic. Myself, I’m disappointed that I was working under an impression or understanding that was not reality,” Jones said.

Precita Eyes muralist Carla Wojczuk was giving a mural tour on June 2 at around 11:30 a.m. when she saw a group, including Jones, with rollers and paint supplies standing in front of the mural.

“I said, ‘Hey you guys might want to wait on this. Because these are community murals and they’re also protected, like legally,’” said Wojczuk.

Jones told El Tecolote that she was unaware that Rismanchi hadn’t communicated with Precita Eyes or Cervantes.

“As soon as it was relayed to me that we needed to speak to them before getting started, I went and left a written message for the mural’s curator with someone at Precita Eyes,” Jones said.

“Once the building owner arrived, he went to speak to them as well and then relayed back to me that Susan approved us covering the side wall and that Precita Eyes would paint a new mural on the front of the building. I continued working under the impression that everyone was in agreement.”

Wojczuk left the mural to finish her tour, but came back to warn them again. After returning at 12:30 p.m., the crew had already started painting over the wall.

Jones, who is originally from Alameda but who now lives in Denver, is associated with the Denver clothing brand, “Be a good person”— which, according to its website, “was developed based on a passion for positivity and a brighter future we foresee within our society.”

In February, the clothing brand announced via Instagram account a collaboration with Jones, who has since painted murals with the brand’s slogan, including at least one in Denver in addition to the one originally planned to replace the Precita Eyes mural.

“It was not intended to be an advertisement,” Jones said.

Jones ended up painting her mural on the Folsom Street side of the building because of the controversy, but by the weekend it had been defaced by taggers.

“The sad part is, I feel pretty regular about it, because this is kind of what’s going on in San Francisco,” said Max Marttila, one of the Precita Eyes coordinators who worked with youth on the original mural. “We really take pride in our murals. It means a lot more to us. It’s really the voice of the people, especially in a time like this, post-gentrification. We really need to keep what’s ours.”