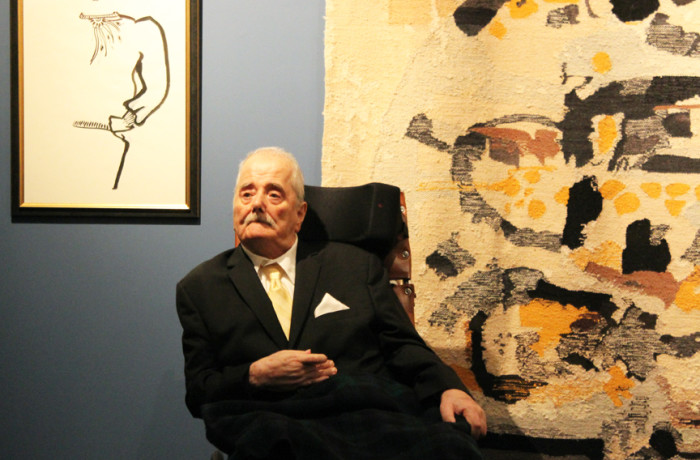 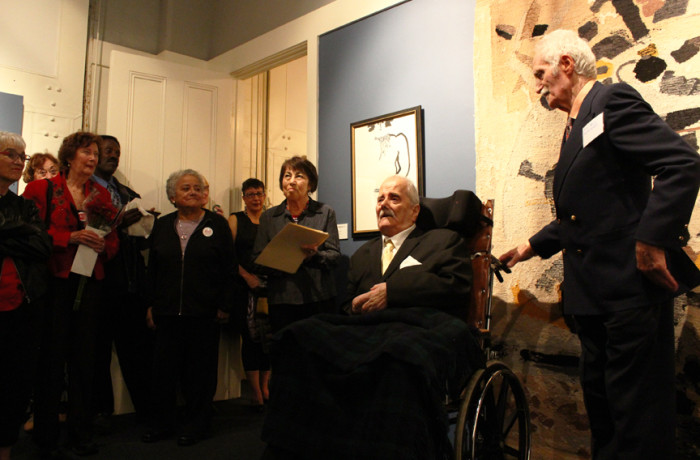 Dozens applaud the Mexican Museum’s founder Peter Rodriguez as he sits in his wheelchair at the 40th anniversary celebration of the museum. Photo Edgar Pacheco 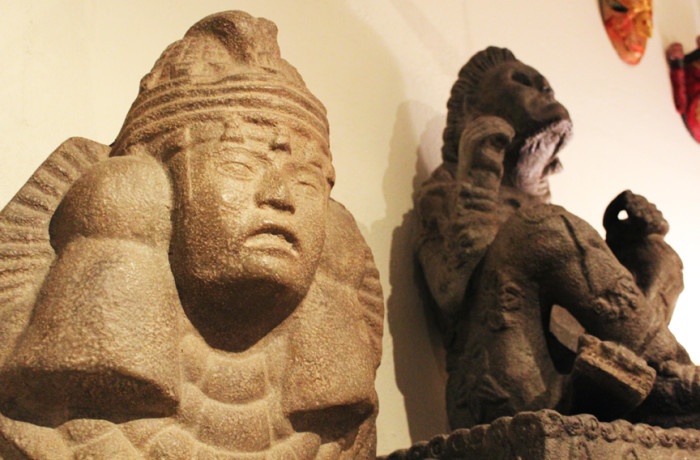 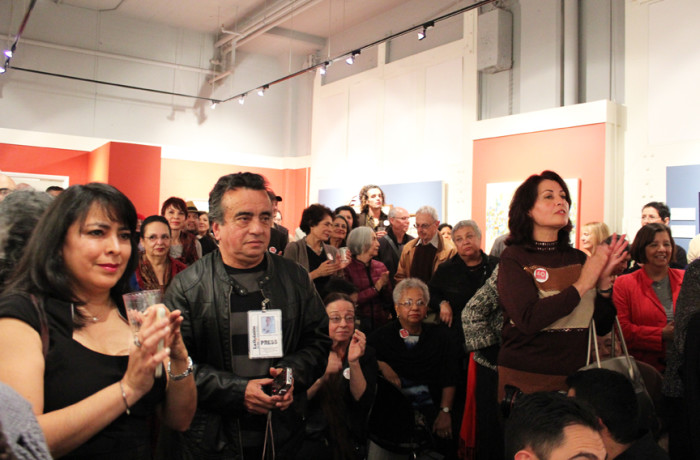 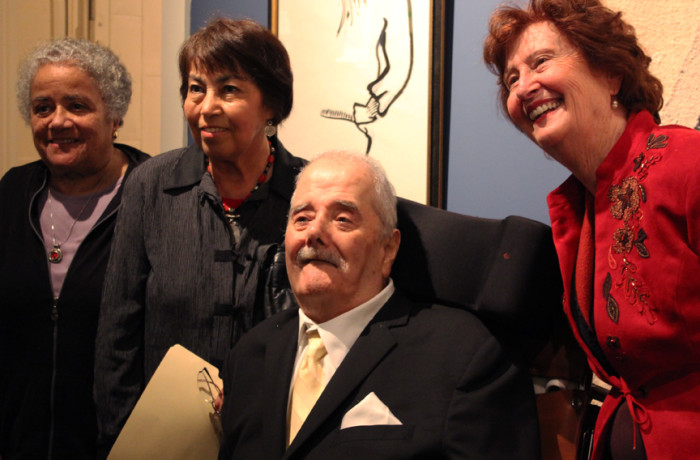 Frail and wheelchair-bound, though dapper as ever, Peter Rodriguez gazed in appreciation at the large crowd that had gathered at Fort Mason on Nov. 19 to celebrate the 40th anniversary of the Mexican Museum—the very institution he helped build.

But the crowd was there to celebrate him as well.

“I didn’t know I was that good,” the 89-year-old Rodriguez managed to joke, struggling to speak in between coughs. “I feel very great about it.”

Founder of the West Coast’s premier museum dedicated to Latino, Chicano and Mexican art, Rodriguez’s life’s work will be on full display until May 20, 2016 as part of the museum’s latest exhibit: “Vida, Cultura y Color: The Art of Peter Rodriguez,” which opened the night of the anniversary celebration.

“You’re surrounded by amazing works of art that were created by these hands,” said Tim Sanchez, the newest member of the Mexican Museum’s Board of Trustees.

But the museum does more than just display various forms of Latino, Mexican and Chicano art. It has historically provided a platform for artists who were shunned by other art institutions.

“For those of us as artists—particularly Chicano and Chicana artists—it goes without saying there were little or no opportunities 40 years ago for us to exhibit anywhere,” said artist and scholar Amalia Mesa-Bains. “And Peter had the vision to give us that space.”

It was a vision that was born in the tiny rural mining town of Jackson, California.

One of 11 kids born to Jesus Rodriguez and Guadalupe Garcia, both of whom fled Mexico during the revolution, Rodriguez taught himself to paint as a child. His Michoacan-born father worked—and died–mining gold and other precious metals from the Sierra foothills. His Guadalajara, Jalisco-born mother—who once persuaded a would-be intruder to not enter her home by pulling back the hammers on a double barrel shotgun—moved the family to Stockton when Rodriguez was still a boy.

But it wasn’t until Rodriguez traveled to his ancestral motherland that he became inspired to build a Mexican Museum in San Francisco, because he didn’t see Mexicans represented in museums outside of Mexico.

“[The] first time he saw the Mexican art, that was the turning point,” said Nora Wagner, who met Rodriguez in the 1970s, and began working at the original museum two months after it opened at Far West Laboratories, located at Folsom and 14th streets. Wagner, along with Bea Carrillo Hocker, Lupe Kindel and Adriana Williams, curated the exhibit.

“We accepted the challenge without any hesitation,” Wagner said. “Because we saw it as a means of paying back a huge debt. For it was Peter and his museum that opened the door for us to experience a very satisfactory career in the museum field.”

But starting such an institution wasn’t easy. Rodriguez began by gathering donations and storing Mexican art in his apartment.

“Chicanos, they [the art world] didn’t recognize,” Rodriguez said. “And I said, ‘We gotta have our own museum.’ That’s when I started working on it.”

According to Mesa-Bains, the museum owns one of the greatest collections of Chicano and Mexican-American in the country.

“There was no one else who had the aesthetic eye, the absolute drive to create what this is,” Mesa-Bains said. “And that is part of his legacy.”

Those words moved Rodriguez to tears.

Rodriguez still paints at the Laguna Honda Hospital and Rehabilitation Center, the place he now calls home. The artist’s mind remains sharp, as was evidenced the night his exhibit opened; he reminded his admirers that his paintings from Laguna Honda were up for sale.

Long-time friend Cynthia Pierce, who also met and worked with Rodriguez in the ‘70s, still visits and paints with him on Wednesdays and Thursdays.

“He believed in it when no one else did,” Pierce said. “People didn’t think it would last, but Peter knew it would. He was determined.”

And he still is. Ever fighting to continue the legacy he’s built, Rodriguez boldly addressed the crowd shortly before the night concluded.

“If you have any spare change, I wish those of you who are not members of the museum, to give as much as you can to keep it going,” said Rodríguez, whose museum is currently open Thursday through Sunday. “We need donations, they don’t have to be little ones.”