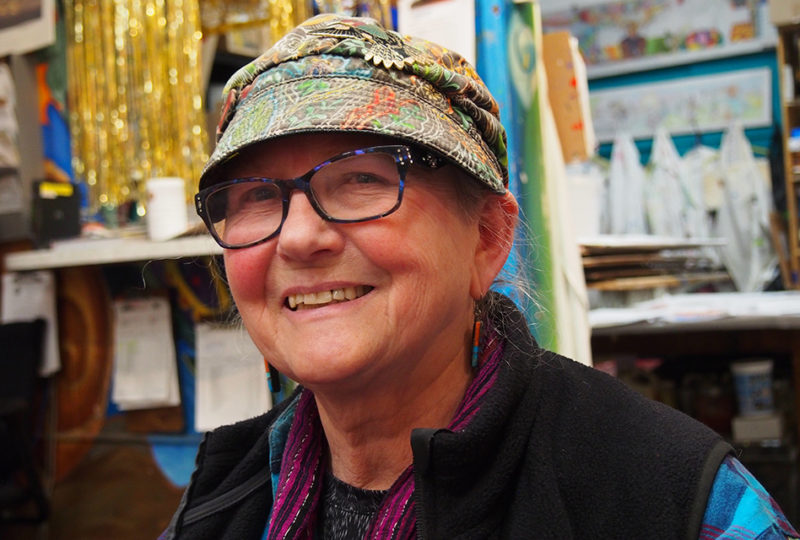 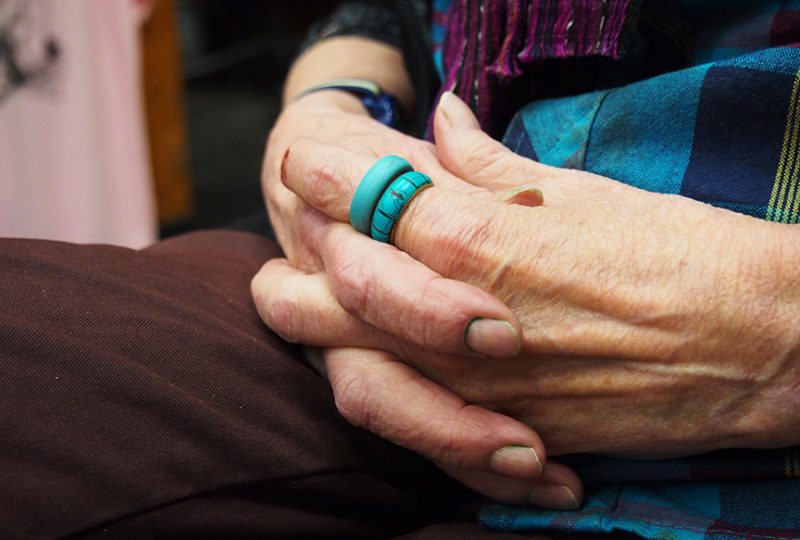 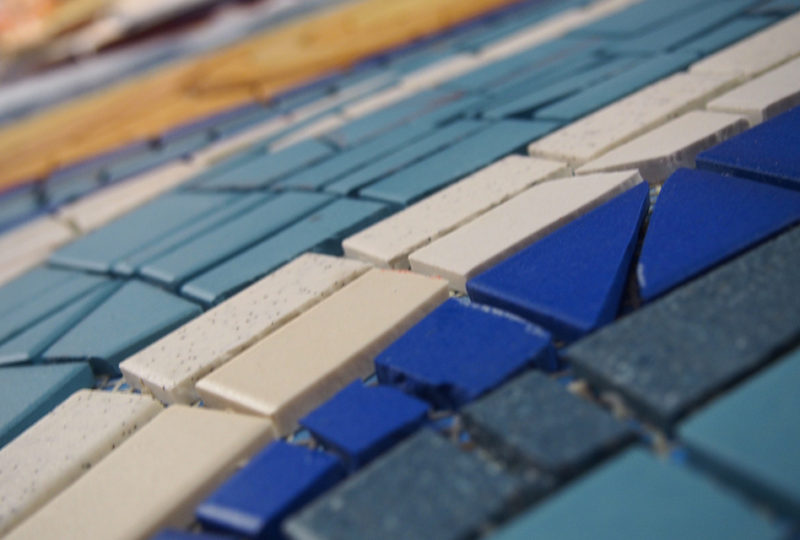 Close up of the tiles on Cervantes’ mosaic – February 2018. Photo: Ella Ramrayka Rogers 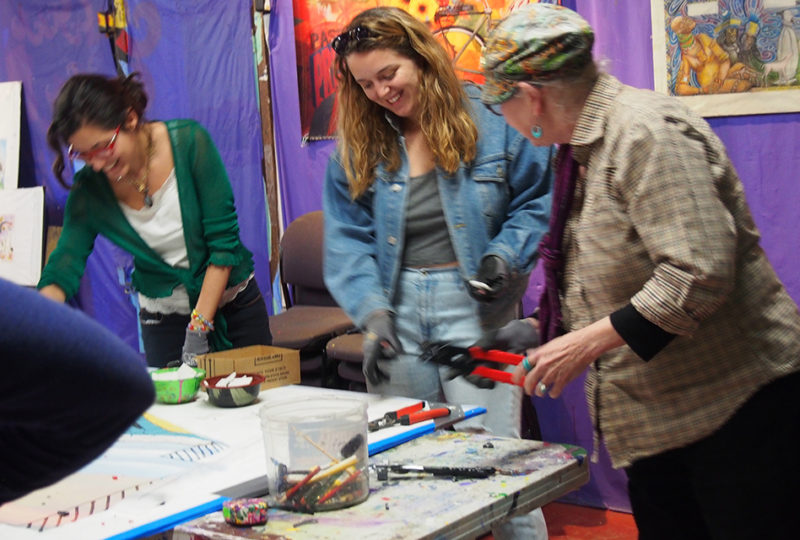 Cervantes and her collaborators laugh while working on her mosaic in the back room of Precita – February 2018. Photo: Ella Ramrayka Rogers 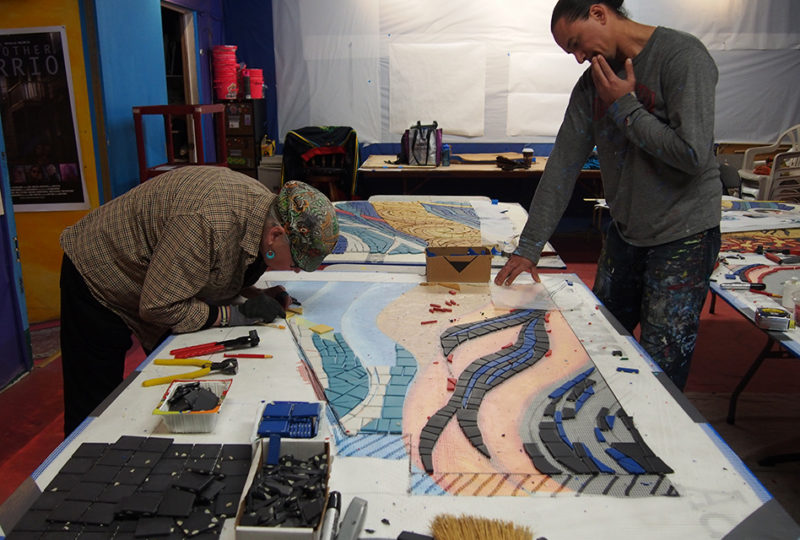 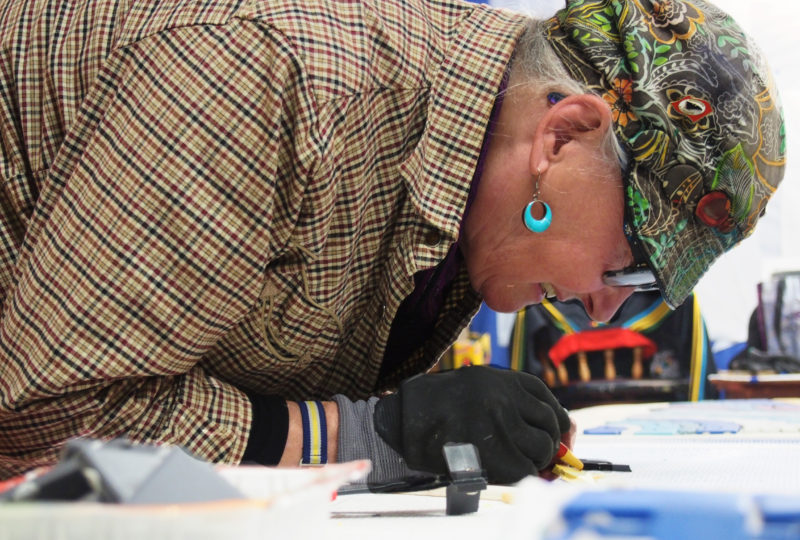 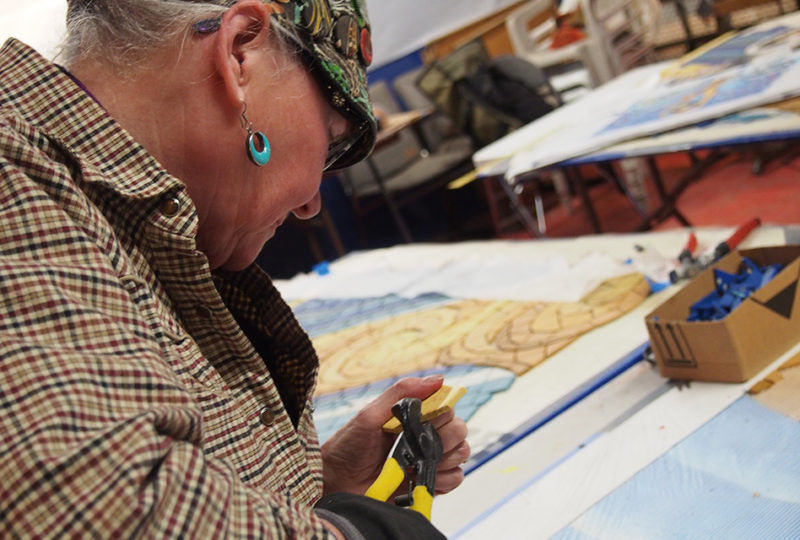 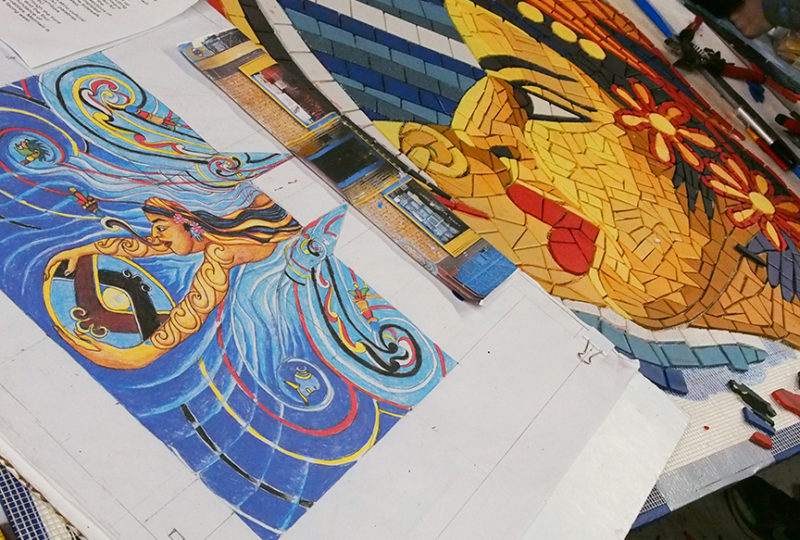 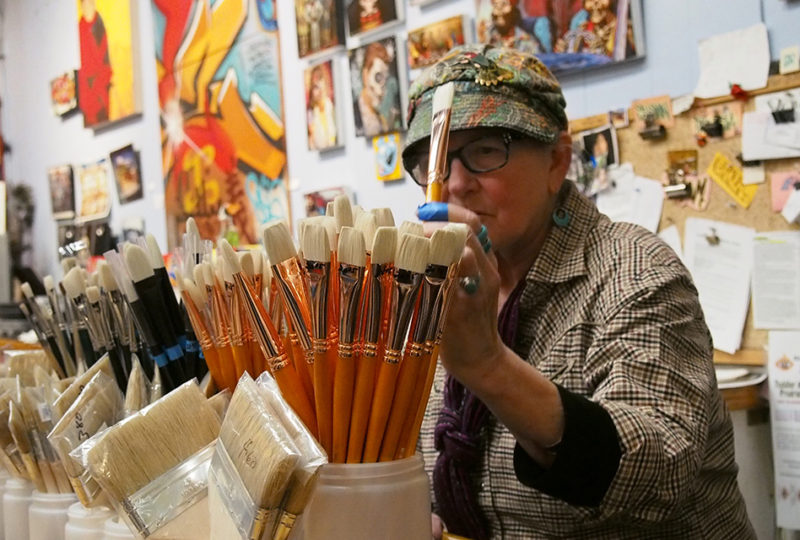 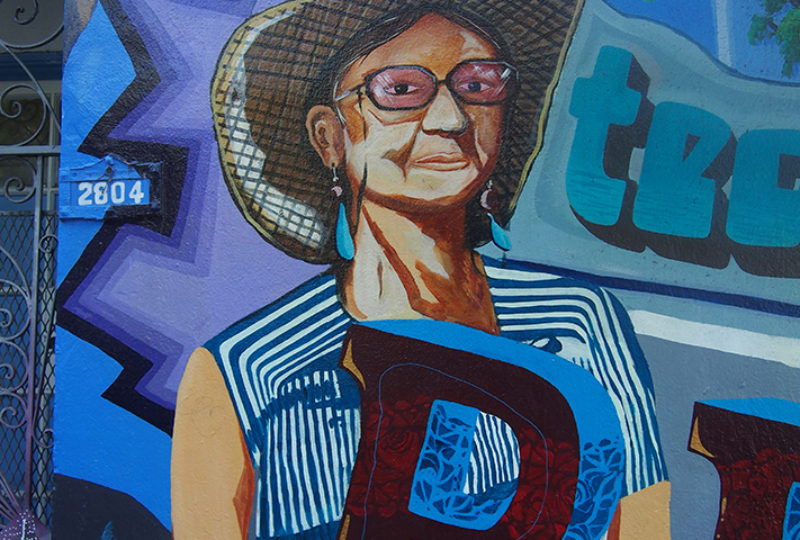 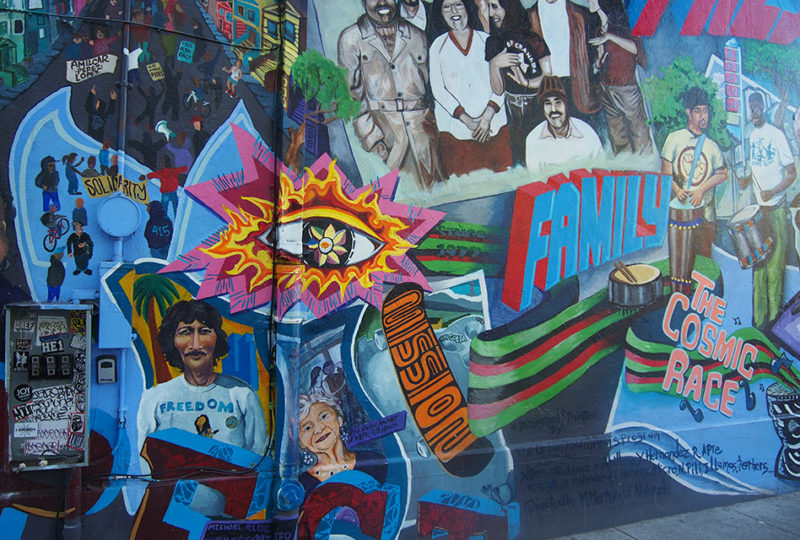 As a child, Susan Cervantes would play with her sisters and hide behind tall plants and saplings in her grandmother’s greenhouse in Dallas. Back then, she didn’t know she wanted to be an artist, let alone a muralist, but she says now that her family was always creating art, even if they didn’t know it.

Her grandfather and father were self-taught musicians, and her sisters were bonafide quilt-makers. “I mean, they all knew how to sew, make their own clothes. It was just kinda what you did, a long time ago,” she said, half smiling. “But I don’t think any of them thought of themselves as an artist.”

I sit across from the Mission muralist just as the sun sets on a windy San Francisco day, but we’re inside a warm, colorful shop with “Precita Eyes” emblazoned on a huge, marigold-yellow wall-mounted sign out front. Cervantes, who is now 73, is well-known in the Mission community for her beautiful murals, and as one of the founders and the director of Precita Eyes Muralists in the Mission District. Established in 1977, Precita Eyes is one of only a few community mural arts centers in the United States.

Cervantes has been painting her murals since 1975, she says, though she’s less than eager to tell me about her first. “I don’t know if I wanna say what my first mural was,” she chuckles, before sighing. “Well, I was invited to do a mural next door from where I lived, on Valencia Street, Valencia and 22nd, and it was called Coffee Don’s, and he wanted a mural on his wall and his business.” And Cervantes did so, in exchange for food.

She wasn’t always a muralist, though. Her art career started back in her hometown of Dallas, when she was still a kid. “I loved painting,” she said. “That was just my passion from the very beginning.” And she was encouraged, too, by family, teachers, who all aided her in her journey to become the artist she is today.

Though she was a good art student, she “didn’t like going to high school so much,” so she took matters into her own hands and enrolled in summer school. This way, when she went to her regular high school, she’d get to do art all day.

Cervantes graduated early, and that was when she decided to go to art school in San Francisco.

“There’s no good art schools in Texas,” she says. “So I went to the Museum library, and found out there was an art school here, and one in Philadelphia—they were the only art schools in the country that gave degrees, at that time. And my parents wanted me to get a degree. So instead of going to the East Coast I went to the West Coast, so I came out here.” And she has been here ever since. She says it simply, like it was an easy decision for a 17 year old to make.

Although it wasn’t all easy for Cervantes. She says that one problem in the artistic community is people taking muraling and muralists seriously. “I think, just having respect [is a problem],” she said. “Having respect for the art that’s community designed and painted, and also that what we’re doing with the community is just as important as any other art form.”

Remembering Antonio Ramírez: A Servant of Our Community, Advocate for Justice

She says that another issue is getting funding for community murals. “Getting funding for what you do is always a challenge. I’ve always been a champion for artists’ rights, as well. That’s always something we’ve had to protect and we’ll continue to protect.”

Cervantes then mentions the highlights of being a modern muralist. “I’ve been doing it now for 50 years, as well as a lot of other artists, and I think it’s finally getting some respect. And also, see how it’s grown. I mean, when we started in the 70’s, there were only, maybe, five murals, and now there’s 650 murals. And it’s not just community murals but individual murals, street art, graffiti, stencils, whatever,” she laughs. “It’s all grown out of this kind of movement of a people’s art. And I like it when it’s for the people… by the people, the most.”

In the future, Cervantes will be installing a new mural on the front of Precita—a large mosaic inspired by Indigenous art is soon to decorate the shop. Her work on the Women’s Building in the Mission is also being commemorated in a book, about which El Tecolote has previously reported.

And as for any aspiring young artists, Cervantes urges them to stay alert and stick with those who stick with them. “I would just say, that they should look around themselves and see where they can contribute their skills and their art… It might be the store on the corner, or the church—it might be something that is part of your environment, part of your neighborhood. So, share your art with those people, ’cause when they see you all the time, they’re the ones who’re gonna support you.”