Coalitions unite behind Nieto family in wake of verdict 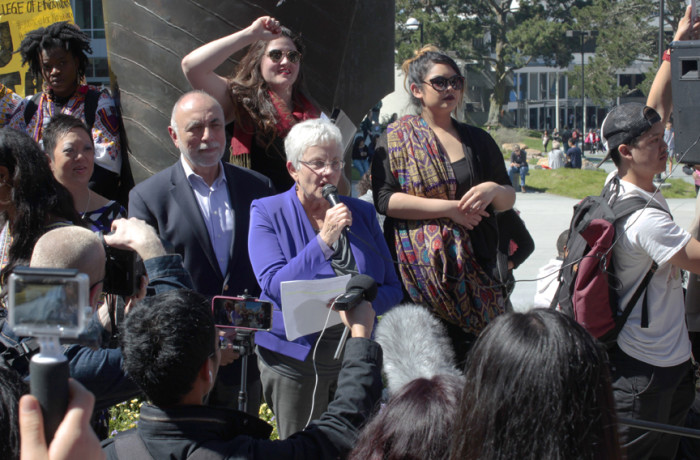 SF State Provost Sue Rosser speaks to students, faculty, and other supporters of the College of Ethnic Studies, in front of the administration building on March 16, 2016. Rosser declined to sign the demands made by the students in support of the Ethnic Studies. As she made her way into the administration building, people booed and yelled “shame on you.” Photo Brenna Cruz 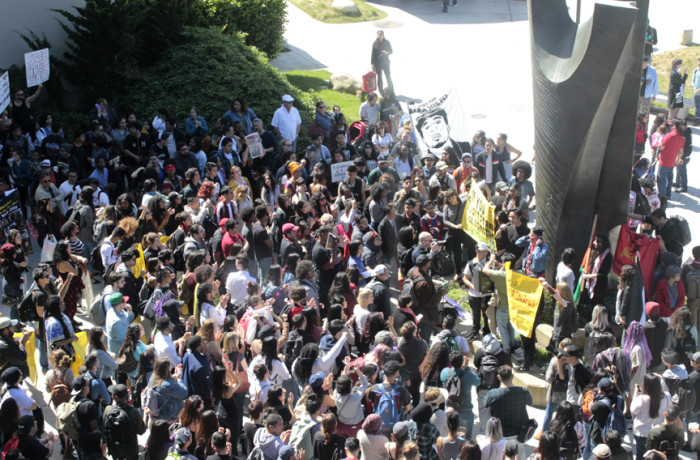 Students gather in front of the administration building at SF State, demonstrating support for the College of Ethnic Studies on March 16, 2016. Photo Brenna Cruz 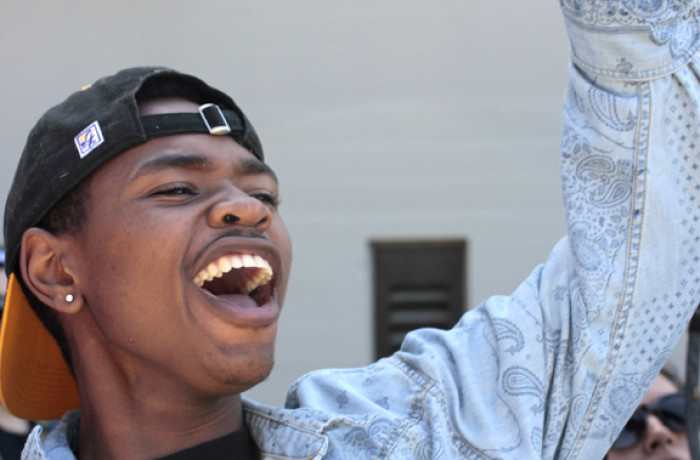 SF State student Hassani Bell, an Africana Studies major, raises his fist in support during the rally in support of the College of Ethnic Studies on March 16, 2016. “They decided that everything I dedicated my life to doesn’t matter,” said Bell. Photo Brenna Cruz 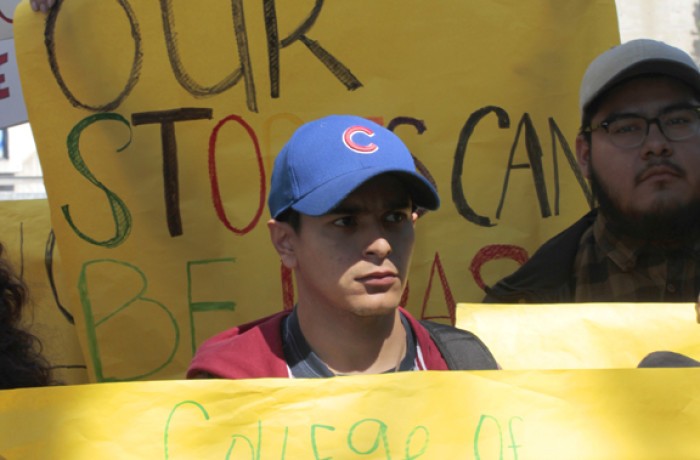 SF State student Antonio Montez, 21, who is a history major with a minor in Ethnic Studies, shows his support during the rally on March 16, 2016. Photo Brenna Cruz 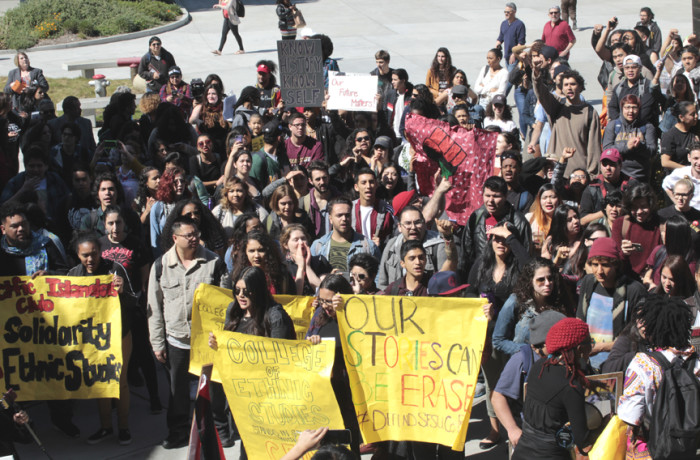 Students gather in front of the administration building at SF State, demonstrating support for the College of Ethnic Studies on March 16, 2016. Photo Brenna Cruz

In continuing efforts toward a solid future for the College of Ethnic Studies at SF State, students rallied on campus on March 16 to obtain signatures from University leaders for their previously established demands.

“I as a student take back the right to my own narrative,” shouted students in a collective voice at the quad before relocating outside the Administration Building.

The rally, which began Wednesday at noon at Malcolm X Plaza, was in response to President Leslie Wong’s indefinite answer to student and faculty demands. Since last month’s major student protest to resolve the issue with the college’s funding, President Wong agreed to provide $250,000 to cover the college’s deficit for another year, but students and faculty are saying that the amount is not enough, and that a permanent solution for the college’s future must be instituted.

“We know we are on the right side of history,” said Black Student Union representative Ghila Andemeskel in a speech. “Our demands are non-negotiable.”

Sofia Cardenas, who’s been an active leader in organizing for the College of Ethnic Studies, said one of their demands was partially met with Wong promising no budgetary cuts to the college for a full year.

Student organizers consider the consistent and increasing underfunding of the college as budget cuts, while the administration insists plans for budget cuts have never been set forth.

Cardenas said conflicting narratives about the college’s budget allocations have been circulated, and that part of the rally’s purpose was to clarify what is happening to the college.

“We are in a deficit just for trying to pay our faculty,” said Shannon Deloso, student representative of Ethnic Studies for the student government body Associated Students Inc.

The budget for the Graduate College of Education (1,080 FTES), for which the administration does not provide, was $5.1 million.

“We were getting a loan from emergency reserve funds which President Wong says we don’t have to pay back,” Cardenas said. “Suddenly we throw a big protest and they find the money for another year. President Wong isn’t telling the full story.”

In a meeting with faculty last month, it was announced that the college would no longer be granted funds from a pool of money which had been set aside for three years to cover the deficit.

“I wouldn’t call them emergency reserve funds,” said Morales in reference to the pool of money. “They were one-time funds set aside to cover high-demand classes and that reserve is running out.”

Morales couldn’t respond in time as to how Academic Affairs had collected funds for that reserve, but said funding for the upcoming year will come from University-wide emergency funds.

Ohlone and Apache community leader Wicahpiluta Candelaria reminded everyone that they were standing in what was once a village of the Yelamu people, a Northern California indigenous group.

“You have to remember it is your responsibility to know these things,” Candelaria said. “You are fighting for access to that knowledge and that wisdom.”

San Leandro High School teacher Erica Viray Santos commuted to the rally with 10 of her students and her toddler son. For nine years she’s taught in the school’s Social Justice Academy program where students focus on topics of police brutality and ethnic studies.

She said her alumni, many who are active in the League of Filipino Students campus organization, have been updating her on the issue at hand.

Another supporter, who is a community college student, drove two hours in morning traffic from Sacramento to attend the demonstration. American River College student Alex Trapps is considering transferring to SF State for its Ethnic Studies program and is currently studying the genealogy of Creole heritage.

Ethnic Studies lecturer Gladys Puente walked out of class with her students to join the rally.

“What we learn in the classroom is a mirror of what is happening in the community,” Puente said. “This is a moment in history and we are here to stand together and regain the power to decide for our education.”

To date, the college has received letters of solidarity from Cultural Studies, Chicana/o Studies and the Department of Asian American Studies at UC Davis.

In addition, the California Faculty Association wrote a letter in support of advancing Ethnic Studies and the organization’s president Sheila Tully made a statement at the rally.

“We are tired of people telling our stories who don’t even look like us. We are here today to take back the narrative,” Deloso said.

Two hours into the rally, Provost Sue Rosser, who declined to sign the student’s demands, issued a statement to protesters for a town hall meeting March 30.

“We welcome you to join us to discuss the processes by which we will make this happen,” she said.