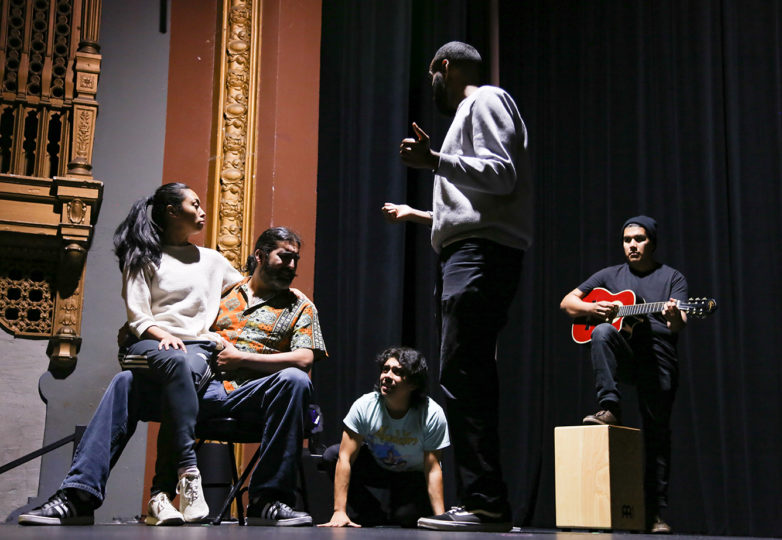 (From left to right) Isa Musni sits on the lap of Alfred Muller while listening to a proposal made by Ron Chapman’s character during a rehearsal for “Death and the Artist” at the Brava Theater. Photo: Gino Abrajano 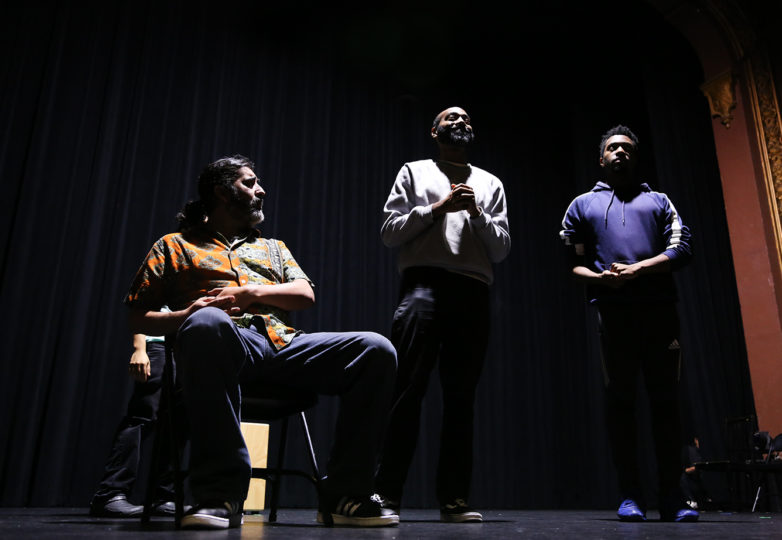 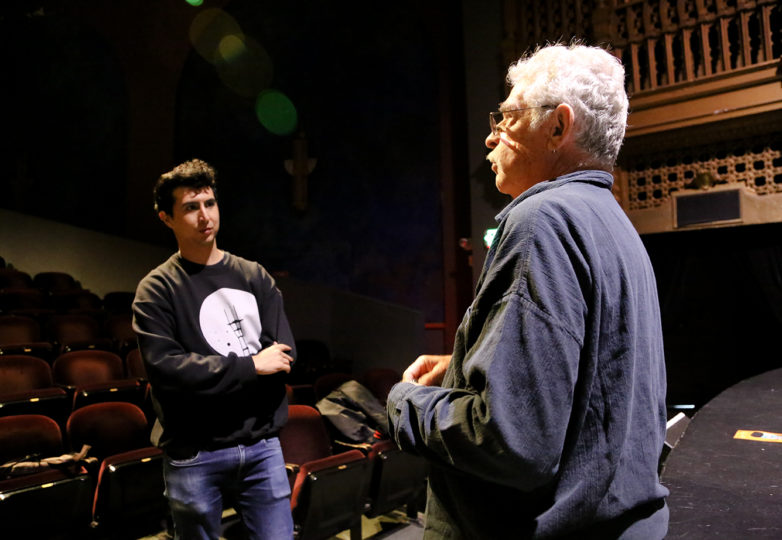 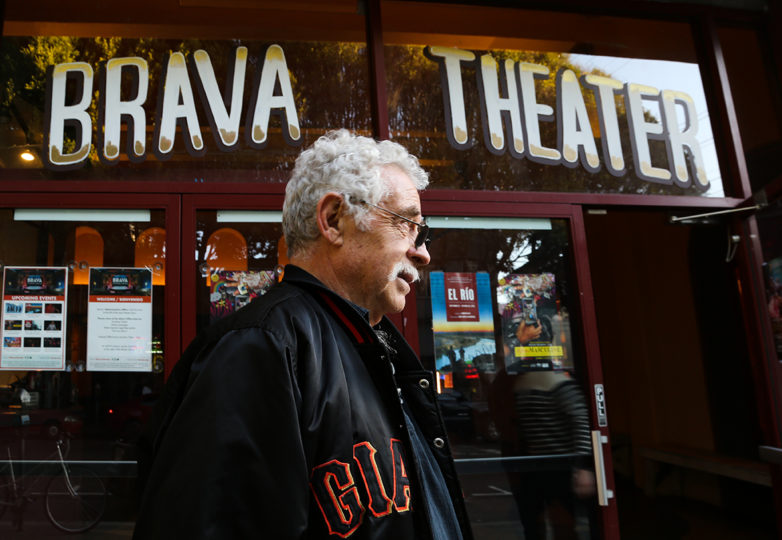 Carlos Baron looks out onto the street from in front of the Brava Theater Center after meeting the director of a play he made an adaptation for. Photo: Gino Abrajano

Death is a scary thing. But so is not living.

That’s the premise of “Death and the Artist,” a theatrical production by Bay Area Theatre Company (BATCO), which is set to open Oct. 17 at Mission Cultural Center for Latino Arts.

Directed by Marcelo Pereira and adapted by longtime community activist, theater professor and playwright Carlos Barón, the play takes place in Alta California and follows the story of Pobreza (played by Alfred Muller), a campesino protagonist and ex-coyote whose defiant chance encounter with God—or Our Lord (played by Tommy Clifford)—leads him on a dark yet humorous journey, where he cunningly cheats Death (played by Benjamin Garcia).

The story is based on the old legend “El Herrero y la Muerte,” and is one that Barón—who revised the script six times—knows well.

“Many years ago my sister Margarita, who just passed about a year ago, was an actress in Chile,” Barón said. “And they produced this very particular play. And I got a hold of some photographs and the script in Spanish, and I loved it.”

But aside from the plays dark humor, it was the universal concept of mortality that captivated Barón.

“The idea of, what if no one died? We’re postponing death more than than our ancestors, more than ever,” Barón said. “What if we could we could put death up on that tree? What chaos would happen? And because it’s dealing with iconic characters, that lend themselves to reflection, but also laughter.”

Some of those “iconic characters” are Our Lord, St. Peter (Played by Michael Huston) and Gentleman Lili (aka The Devil who also moonlights as the show’s narrator, played by Ron Chapman).

And despite the shows Latino origins, it’s unapologetically San Francisco. The show features a 10-person multicultural, multiethnic and multigender—or what some may consider a “non-traditional—cast.

That move was intentional.

“They’re good actors. They happen to be black. But they’re also cast for reasons of making people, after a second of surprise, pay attention to what is being said,” Barón said. “Because what is being said is universal. It goes beyond color. Beyond skin deep assessments.”

The story unfolds with Our Lord and St. Peter descending from heaven to check on the mortals on earth, or more specifically, Yerba Buena.

In BATCO’s version, the playwright and producers make it clear that Our Lord is hesitant about the visit, fearing that the situation on earth has gotten out of hand.

But once Our Lord meets Pobreza, it changes that fate of all in Yerba Buena, including Pobreza’s sister, aptly named Miseria (played by Mercedes White) and the town’s shrewd Governor (played by Julio Chavez).

In addition to making people laugh, Barón hopes the message of ‘get busy living’ resonates with the audience.

“We should not be afraid of death, we should be afraid of not living,” he said. “Death is only a couple of seconds, then an eternity. Living, or not living, takes everyday, it’s painful. Worse than death is not living.”

But while the production humorously wrestles with death, for Barón, it is also a call to action to keep theater alive.

“There’s no need for [theater],” he said. “I always say, if we were as important in the theater as garbage collectors are…the whole city is thinking about garbage at least once a week. If we had people thinking about theater at least once a week, we would be in good shape. But in order to do that, we have to become essential. We have to become as important as garbage collectors.”

So support local theater. And laugh.

“Death of an Artists” will running from Oct. 17 to Nov. 3 at Mission Cultural Center for Latino Arts, located at 2868 Mission St, San Francisco. For more information, visit sfbatco.org.

A serendipitous dance with dogs