Living for the city isn’t just a Stevie Wonder song; for the father-son artist duo—George Crampton and George Crampton-Glassanos—it’s a lifestyle. Sitting on the porch, walking around the city and working together painting houses are all things that have sparked the love they carry for San Francisco, and it shows in their art.

“I feel very fortunate to have him show me everything,” Crampton-Glassanos, 29, said of his father. “His use of color and line work are definitely a huge influence on me.”

But Crampton’s art can’t be viewed in a gallery or online, that privilege is reserved for family and friends. Crampton, 65, moved to the city from Illinois in 1976 as a student attending the San Francisco Art Institute. He and his wife raised a family for 38 years in the Mission, including their son George, until the family was Ellis Acted out in 2003.

A native son of San Francisco, the younger George has showcased his paintings in galleries around the Bay Area. This will be the first time father and son will present their work, “Livin’ For the City,” together in the neighborhood they love on June 29 at Acción Latina’s Juan R. Fuentes Gallery.

“I think our art looks good mixed up together,” said Crampton-Glassanos, just before his father weighed in.

“George is far more talented than I am,” Crampton said of his son.

The paint on Crampton-Glassanos hands, clothes and black-rimmed glasses is a testament to his craft. When the father and son aren’t creating art, they work around San Francisco as general contractors. Either together or apart, Crampton-Glassanos works part-time contracting for the International Longshore and Warehouse Union (ILWU). Through the years, they’ve kept their art alive in between work.

Crampton inherited the drive to paint from his mother, who was an artist. His wife, Mary Glassanos, is a photographer who also attended the art institute.

The couple’s interest in art was passed down to their son George, later attending the San Francisco School of the Arts.

“He used to draw nonstop, like all the time, he always had a pencil in his hand or a pen, and he would always be drawing,” Mary Glassanos said of her son. “I just knew that’s what he was going to do.”

Father and son are still grounded in the Mission community. Throughout years Crampton-Glassanos has painted over a dozen murals in the city, some of which are still standing. He gazes over his coffee table, which has become his preferred work space.

“What I think really stood out to us was the idea of having a father son duo at Acción Latina in general,” said Fatima Ramirez, Acción Latina’s cultural arts manager, who worked with father and son to produce the show. “We find that our events are enriched by intergenerational conversation.”

Crampton-Glassanos maintains a spot in Clarion Alley with his mural “Born and Raised.” His father is no stranger to murals as well. Crampton painted a mural inside the famous Automatt recording studio, where artists like Santana worked. He paints for himself in his studio at home, making cardboard cities out of  materials at arms reach.

“I think his artwork was unique,” Mary Glassanos said of her husband. “I don’t remember anybody else who did the kind of stuff that he did.”

The city provides the father and son with plenty of motivation for their artwork. They learned to appreciate the cranes outside their windows, the sunset over the hills and the surrounding architecture that defines San Francisco. Their works are completely their own yet similar, but both live for the city.

“We can’t help but be influenced by our environment,” Crampton said. 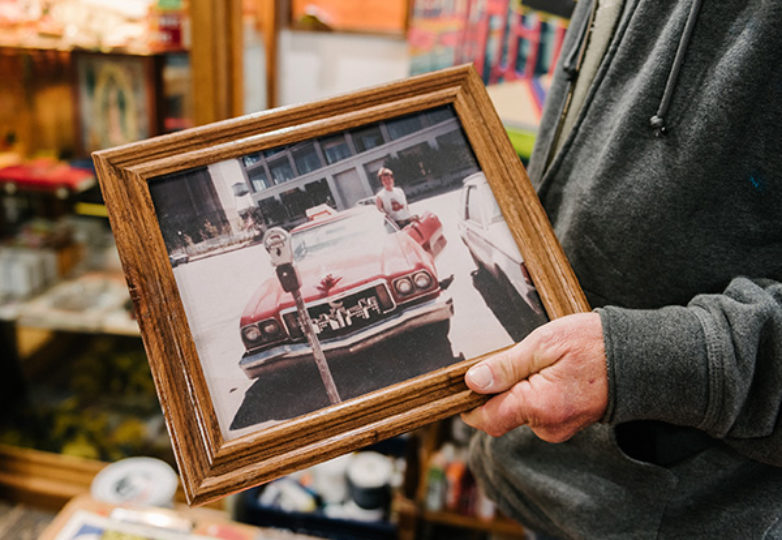 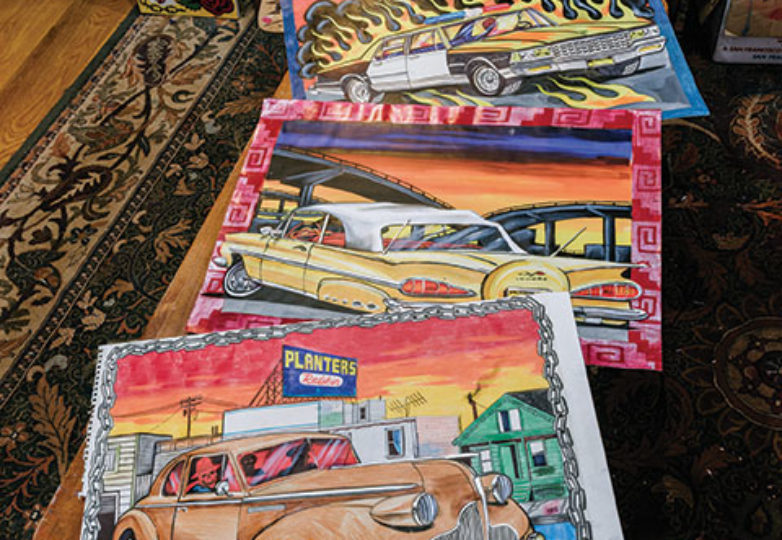 George Crampton-Glassanos’ car paintings are displayed on his living room table inside of his studio in the Mission District, June 16, 2019. Photo: Mark Jayson Quines 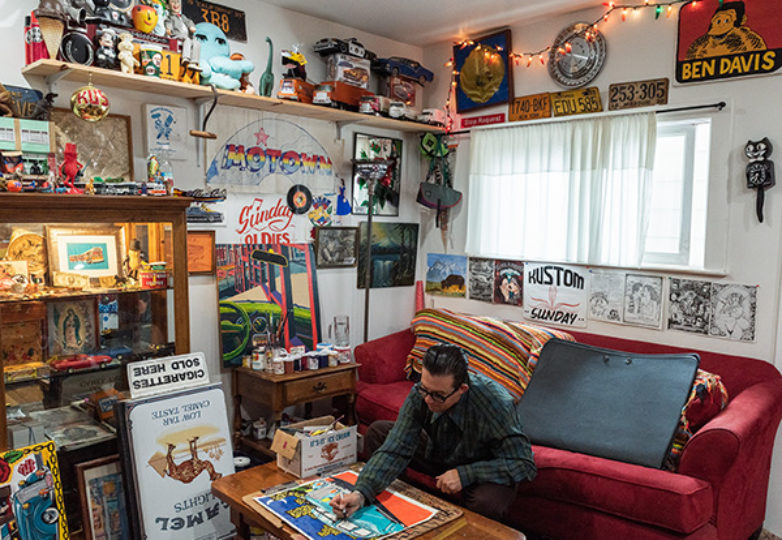 George Crampton-Glassanos works on a piece for his upcoming show, in his living room studio in San Francisco, June 16, 2019. Photo: Mark Jayson Quines 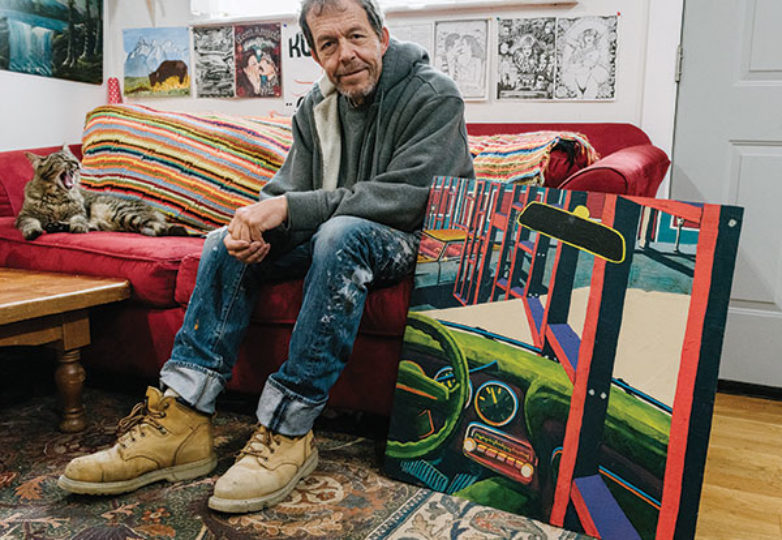 George Crampton poses for a portrait with one of his original paintings on June 16, 2019. Photo: Mark Jayson Quines 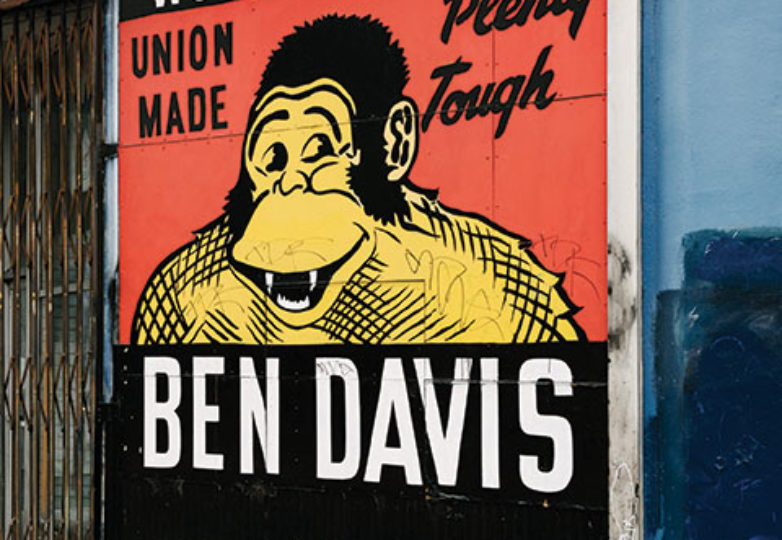 The well-known Ben Davis mural painted on the side of the now closed Arik’s at Mission Street and Valencia Street. Photo: Mark Jayson Quines 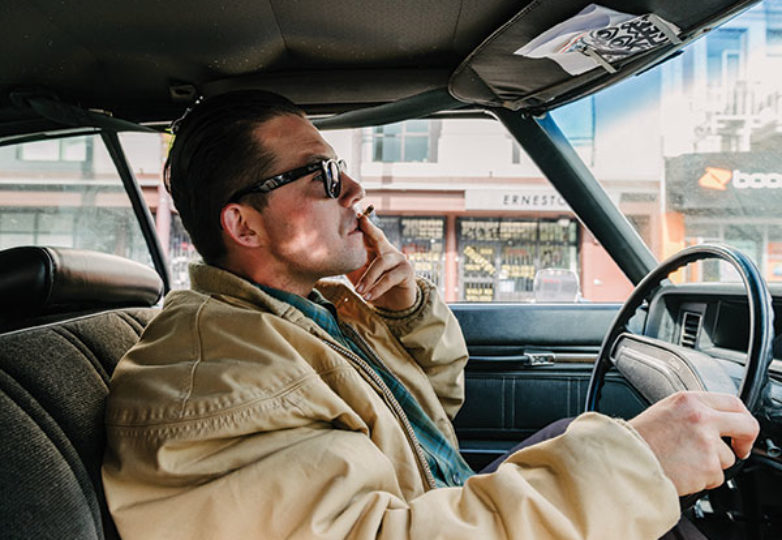 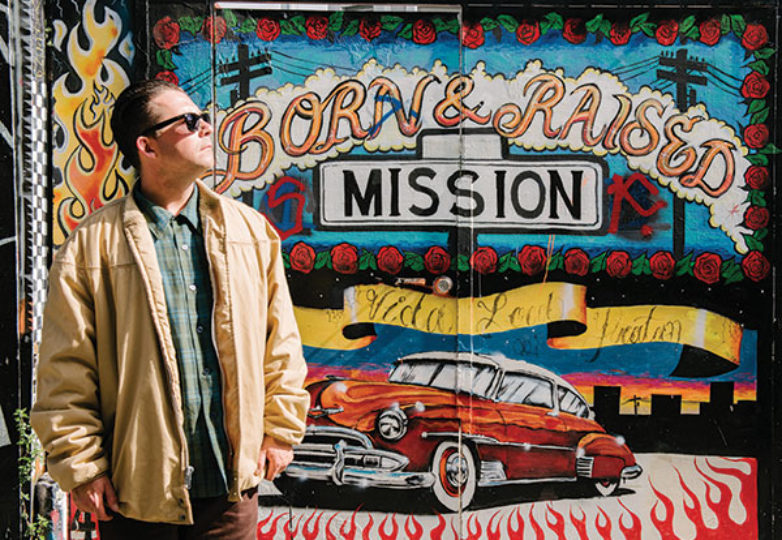 Roaming the Mission helped Crampton-Glassanos appreciate the art, which now serves as a comforting reminder of his childhood. After vandals defaced his Ben Davis sign at Arik’s on Mission Street (between 22and and 23rd streets), Crampton-Glassanos decided to restore it to its former glory. Later, Ben Davis the clothing company, contacted them and sent a box of clothes. Now, no one dares to spray paint over the sign.

Recently, Precita Eyes muralist Max Marttila approached Crampton-Glassanos, his childhood friend, to collaborate on a mural. The mural—Once Upon A Time in the Mission—is a tribute to those who’ve lost their lives to gang violence, and is located on Shotwell and 24th Streets. Some of those who died were friends of Max and George.

“That job was really perfect to bring him on, because it was connecting with a space that was very important to him,” Matilla said. “I really appreciate his commitment to the community.”

No matter what scenery they come across in the city, the father and son find beauty in any corner. And recognition is something the multigenerational artists don’t seek when they premiere their art.

“The best thing that could happen is that someone is inspired by it,” Crampton said.

“That’s our No. 1 goal is to just inspire people,” his father added. “I want all my friends and family there and I want to share with them what I’ve been working on.”