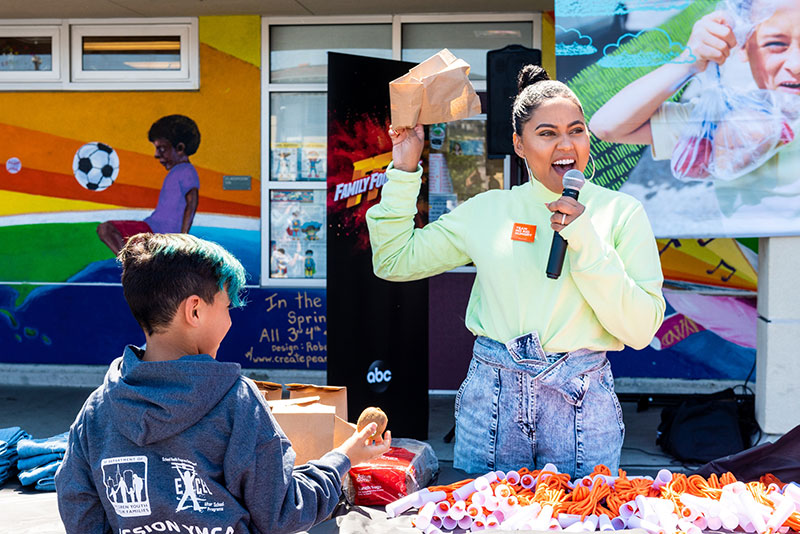 On June 17, children and adults gathered at Monroe Elementary School’s playground in San Francisco to bring awareness on the No Kid Hungry Campaign’s texting summer line, which will run through September.

“What we are really trying to do is make sure that the kids and the families walk away with information about our texting line,” said Mariela Donis, Regional Representative for the No Kid Hungry Campaign, which is giving kids access to free meals nationally all through summer.

During the summer months, a child, parent or caregiver can text “comida” or “food” to 877-877 and they will receive a response with the nearest school locations where they can find free summer meals.

Any child under the age of 18 in the San Francisco area will have access to free breakfast and lunch at surrounding schools in their area. However, only a select number of those schools will be providing dinner.

According to the No Kid Hungry facts page, one in six children in America struggle with food insecurity.

In California, that number is larger and food insecurity affects one in five children.

Hearing that large number was a big reason why campaign ambassador, Ayesha Curry, decided to get involved five years ago. It was important for her to be a part of the campaign, especially because she also has children of her own.

“I mean there is a place all across America [that serves summer meal plans] and so I think it’s important for people to know that and not be ashamed,” said Curry. “It really does take a village to raise a child and so there is a village around America for their summer meal programs.”

According to the No Kid Hungry summer meals page, 22 million children depend on school meals, leaving them vulnerable once the school year is over. This also puts a strain on parents and caregivers since 43 percent of low income families in the United States have reported that it’s tougher to make ends meet during the summer.

Unfortunately, not many families are aware of free meal services like the No Kid Hungry Campaign but campaign ambassador Curry is actively working to get the word out through her social media outlets.

No Kid Hungry hosted a number of pop-up events across the nation last week, June 17-21, to bring awareness to their summer texting line in hopes of reaching more families in need of meals this summer.