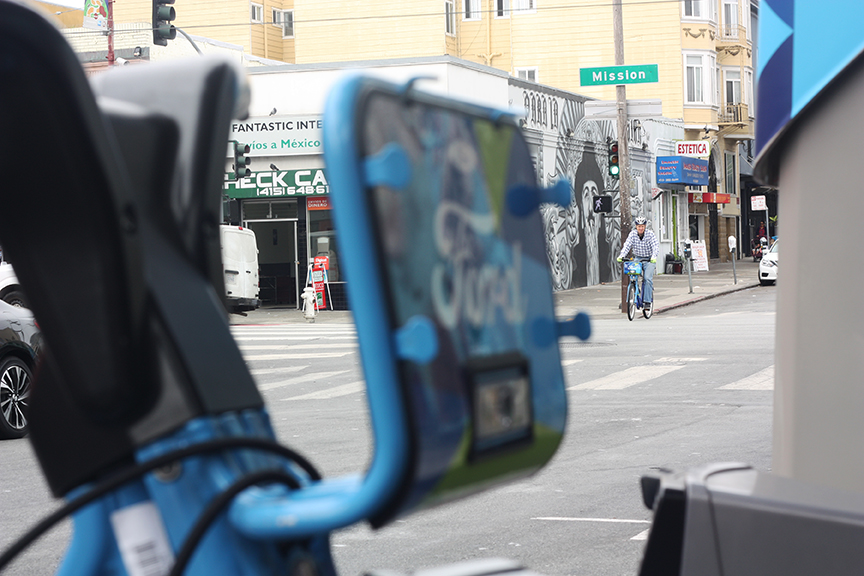 “We are doing what we were elected to do,” Arguello said. “When we formed the council, we met with focus groups and what was repeatedly emphasized was: ‘We don’t want the Mission to turn into Valencia street.’ They were adamant about that. We saw affordability was the biggest issue, fear of displacement, fear of the Latino culture disappearing, we took that and we’re going through our community process and we want that respected.”

Nineteen people sit on the Calle 24 Council, all of them community members, ranging from artists to merchants, business owners, neighbors and activists.  The negative response to the rejection of the bike sharing system has been tinged with racism. One Reddit user on San Francisco’s subreddit said of Calle 24: “They believe anything which helps “those people” is bad, even if it also helps the neighborhood as a whole.” The council has also been accused of  “preserving ghettos.” But the backlash has only reinforced its decision.

“It’s sad to say, we’re used to that,” Arguello said. “Similar remarks emerged when we first formed the Latino Cultural District, back when Army Street was being renamed Cesar Chavez. These comments and supporters of Ford GoBike are coming from transplants who don’t have strong roots or ties to this community.”

Arguello stressed that the stations, which take up approximately three parking spaces each, are not being blocked in all of District 9 (where the Mission is located), but only along the 24th Street corridor.

He acknowledged that bikes are among the only available means of affordable transportation for many immigrants, and said that when Ford approached Calle 24 about the project eight months ago, it emphasized affordability.

“[Ford] highlighted affordability, pointed out they wanted to include these in low income working class communities and wanted to make it affordable,” Arguello said. “$5 for the first year and $60 the year after and their regular scale is $120.”

While this effort to provide access to low-income communities seems positive, many wonder why Ford, an auto company, is investing in bike sharing in the first place.

The original Bay Area Bike Share program was founded back in August of 2013. A joint project between San Francisco Metropolitan Transit Authority (SFMTA) and the Bay Area Air Quality Management District (a public agency that monitors air pollution throughout the Bay Area’s nine counties), it began with 350 bikes and 35 stations.

The program eventually doubled in size, but was discontinued on June 11, 2017, when Ford Motor Company, offered to finance a replacement program: Ford GoBike.

Ford and its partner, the New York City-based bike sharing company Motivate, were awarded a seven-year contract to further expand the bike share network in the Bay Area by 2018, from 700 bikes to 7,000 (328 to 4,500 in San Francisco). The ten-fold expansion would be built and operated by Bay Area Motivate but funded by Ford Motor Company, according to the SFMTA.

The timeliness of this acquisition prompted an investigation from Business Insider, which determined that Ford Motor Company had more than affordable transportation in mind when it launched Ford GoBike in San Francisco.

According to the article, Ford Motor Company’s president and CEO James Hackett gave a presentation to investors on Sept. 14, 2016 outlining the company’s true intention with Ford GoBike:

“What we’re doing differently in San Francisco that isn’t done in New York is we put telemetry on that bike,” Hackett reportedly said. “Telemetry is a form of communication, so now the bike is pinging data to us. … The opportunity is not bikes. That’s not why Ford’s in it. The opportunity is data, and the data is super valuable because it tells us these invisible paths that people are taking in this complex city in terms of how they want to get around. … We can take that data and we can connect it in ways that our new shuttle is going to connect to the cloud as well.”

Ford Motor Company’s purchase of Chariot was a major factor in the council’s decision.

“I’m concerned with corporate interest in our cultural district, and links to the Chariot private bus service,” said Wendy Bardsley, a Calle 24 Council member. “We have seen more private options for transit that seem to further emphasize economic differences, and aim to compete directly with city buses.”

The tracking system that Hackett spoke of was another issue raised by the council.

“This affects undocumented folks,” Arguello said. “What if the government comes in search of an individual and approaches Ford? They will have access to the routes they’re taking, they can get a warrant and know where they’re going, their daily routines and where to pick them up. It’s a big risk for our community.”

Despite Ford’s insistence that the program will address the transportation needs of low-income communities, the Calle 24 Council has no intention of rescinding its stance.

“No one is saying Latinos don’t ride bikes, but any bike sharing system or idea needs to come from the community itself.  We know better than … [a] corporation what’s good for us.” Arguello said, adding that, “It’s cheaper in the long term to buy a bike if you’re low income. You’re not being tracked and you’re not advertising Ford.”

If all goes according to plan, the Ford GoBike program will eventually cover half the city with 320 stations. The Mission, the Castro and Noe Valley neighborhoods were part of the first wave of expansion, the next phase, according to SFMTA, will target outer districts like the Richmond and Bayview-Hunters Point.

“I would love to see a bike sharing solution that is led by community organizations, where data isn’t mined, money stays local, and there’s an emphasis on serving those who aren’t being served by Ford GoBikes,” Bardsley said.