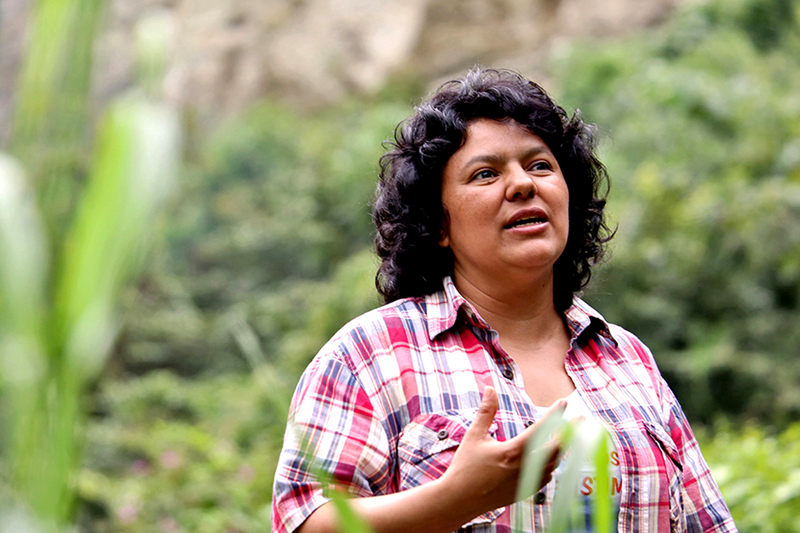 An indigenous woman battling to keep the rivers and forests in her country from being completely swallowed up by transnational companies is one of the recipients of the 2015 Goldman Environmental Prize—the world’s largest and most prestigious award for grassroots environmental activism.

Berta Cáceres, of the Lenca indigenous nation in Honduras, was announced as one of the six prize-winners on April 20, along with Myint Zaw of Myanmar, Marilyn Baptiste of Canada, Jean Wiener of Haiti, Phyllis Omido of Kenya and Howard Wood of Scotland.

The prize, which recognizes fearless grassroots environmental activists working against all odds to protect the environment and their communities, is awarded each year to environmental heroes from six inhabited continental regions in the world.

Cáceres, representing the South and Central America region, is the general coordinator for the National Council of Popular and Indigenous Organizations of Honduras (COPINH), which was co-founded 22 years ago to protect the rights of her people and their territories.

In 2011, COPINH fought to stop the Agua Zarca hydroelectric dam from being built on the sacred Gualcarque River. They were up against one of the world’s largest dam builders and transnational companies—the Chinese state-owned Sinohydro—in a joint project with Honduran company Desarrollos Energéticos S.A. (DESA).

“We have a strong process to fight against exploitation. This is what we have always done—and even more now with the transnational exploitation we see,” Cáceres told El Tecolote.

COPINH appealed government officials numerous times over not consulting with the Lenca about plans to build a dam on their territory. Cáceres filed complaints over violations of international treaties governing indigenous people’s rights, brought community representatives to speak, but there was no response.

In 2013, Cáceres rallied her community to create a peaceful roadblock to prevent DESA from accessing the site, enduring attacks from the military and private security forces. During this period one of the leaders, Tómas Garcia, was murdered, drawing outrage and even more community resistance.

But the killing didn’t stop there.

In 2014, William Jacobo Rodríguez, a COPINH member and activist opposing the dam, was murdered. In October of last year, Rodriguez’s 15-year-old brother Maycol was found dead in a river, his body showing signs of torture.
And Cáceres hasn’t been immune to such threats.

“I didn’t even know if I would get here safely to San Francisco,” said Cáceres, who has received at least 20 death threats since December. “I had to get a legal document drawn up saying what will happen with the [$175,000] prize money if I am killed. In a country like Honduras, you have to think of these things, because it is something that is probable, not some far-off thought. Death swirls very closely.”

Since the Honduran coup d’état in 2009, there have been 47 concessions to power hundreds of new mining projects— one of which was Sinohydro.

Ultimately, the World Bank withdrew funding and the world’s largest dam builder was pressured to pull out of the project, terminating its contract with co-partner DESA.

“There are a projected 300 hydroelectric projects planned,” Cáceres said. “We are a small country with many riches. With 8 million people—to give 30 percent of the territory to the transnational mining companies is worse than the colonization of 500 years ago. And, they do it with impunity.”

The 2014 report titled “How Many More?” by the NGO (non-governmental organization) Global Witness stated that nearly 75 percent of the 116 known deaths of activists around the world occurred in Central and South America, citing Honduras to be the most dangerous country to be an environmentalist and land activist. The report states that 47 indigenous people were killed defending their natural resources.

This January, Cáceres received credible information of plans to kidnap her after her involvement to stop yet another hydro-electric project: the Canjel river dam.

“Our people have a very strong and present memory of the spirit of rebellion,” Cáceres said. “There were big insurrections against the conquistadors. For the last 500 years we have been fighting in defense of our land, in defense of water. The Lenca are people of the water, of corn, and rivers are sacred to us. The Lenca consider an aggression against the river as an aggression against the people. The rivers are life. We can live without gold, without silver, but not without water.”

“They can attack her. They can even kill her,” said journalist and Cáceres’ friend Melissa Cardoza, in a video interview. “But her life transcends this moment in time.”