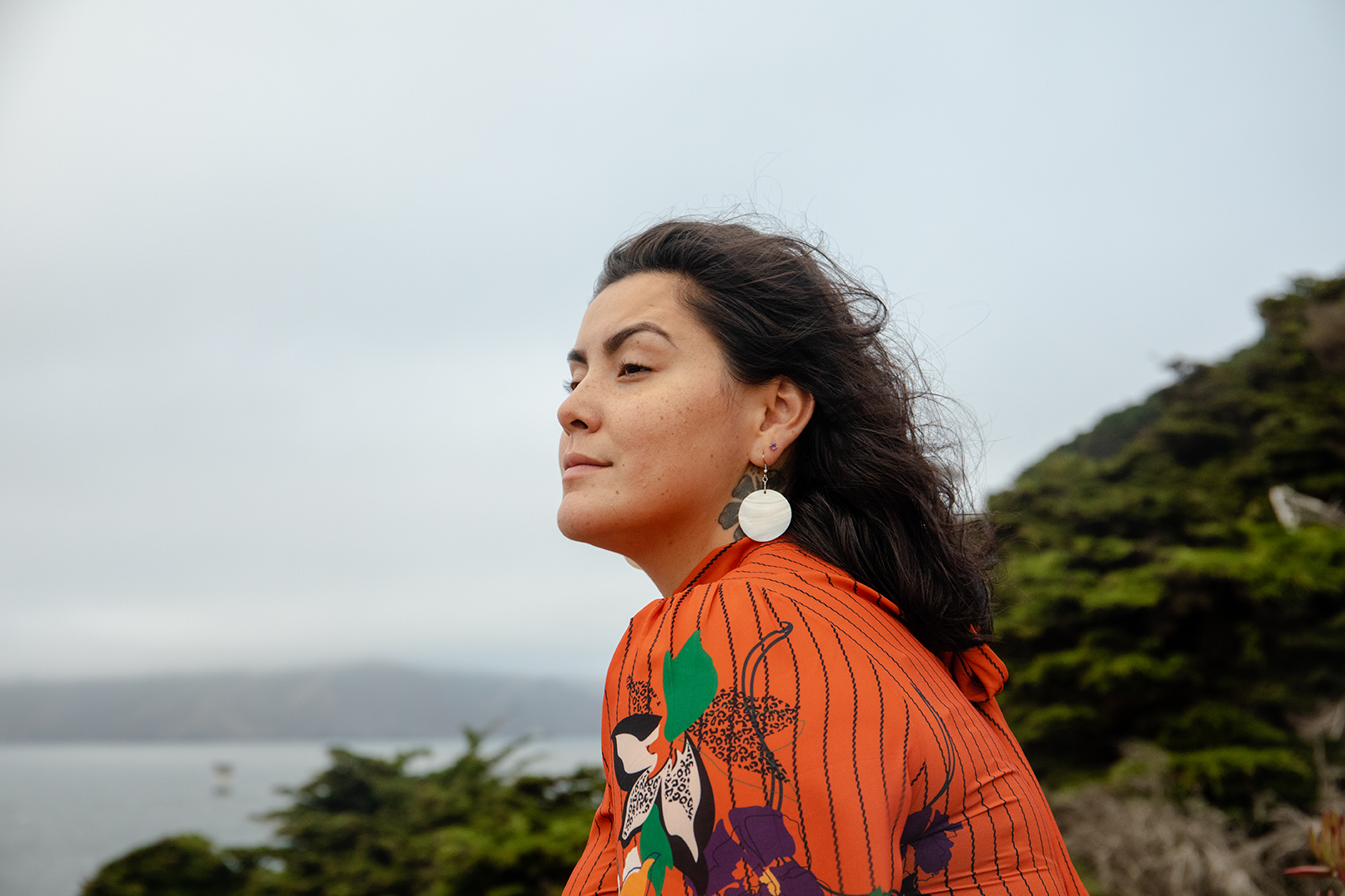 With music grounded in hip-hop, Suquamish artist Calina Lawrence carries a message of resistance and solidarity into the recording studio and onto the stage, advocating for causes that hit close to home.

Born and raised on the Port Madison Indian Reservation, the 26-year-old musician celebrates the legacy of “dxʷsəqʷəb,” a Lushootseed phrase meaning “place of clear salt water” which has been home to the Suquamish people in Washington’s Puget Sound region since time immemorial.

On Aug. 20, she released the music video to her first self-produced single “ʔəshəliʔ ti txʷəlšucid [Lushootseed is Alive],” which pays tribute to her Suquamish heritage. The song begins and ends with “ʔəsx̌id čələp [How are you folks?] / ʔəswələx̌ʷ čəɫ [We are strong],” a dialogue Lawrence hopes empowers audiences to persevere in life.

“What would it be if we asked someone that we love or a group of people that we love, how are you doing? And that response is ‘I’m strong.’ It’s not something I hear often but it’s one that I see in their actions,” Lawrence said.

Filmed in ancestral villages across the Kitsap Peninsula, the video featured an all indigenous crew, including Kanion Productions, cinematographer Tomas Karmelo Amaya, and voices from the Suquamish Culture Camp.

“I wish every single song I wrote could come from that place of pure happiness and laughter,” said Lawrence, who co-wrote the track with longtime friend Joey Holmes Sr. “It was like we were little kids free to speak this language out in the open and in the comfort of our own homes, and who can be joyful about it.”

However, that wasn’t always the case for generations before her. Decades of U.S. assimilation efforts resulted in a near loss of the language, forcing thousands to abandon their traditional way of life.

In 1819, Congress passed the Civilization Fund Act, which sought to assimilate Indigenous youth to Western culture. In effect, the policy authorized the forcible separation of Native American children from their families and into faraway boarding schools. The institutions—created to figuratively “kill the Indian, and save the man,” as one general put it—stripped students of their culture, languages, and religious practices.

It wasn’t until the late 1970s that legislators outlawed the egregious removal practices by way of the Indian Child Welfare Act, which gave tribal governments more jurisdiction in child custody issues.

“I can only sing this song in Lushootseed because of every grandchild who spoke it out loud to assure that the laws of these lands’ languages precede any colonial law that exists here through religious warfare, coercion, forced migration, slavery, greed, and violence,” Lawrence said on social media.

For many Native people, the historical and intergenerational trauma remains but while systems of oppression and assimilation have happened so has resistance and preservation.

Today, Lushootseed is incorporated into all levels of education at Suquamish Schools from early learning to secondary school programs; the tribe also provides weekly opportunities for families and community members to practice and study their language together. This year, Seattle Public Schools (SPS), the largest K-12 school system in Washington, adopted a social studies curriculum that incorporates the history and affairs of nearby federally recognized tribes, and approved five Native American languages for high school credit, including Southern Lushootseed, Haida, Navajo, Nez Perce and Lakota.

“There’s this interesting irony of people in this country, people who are demanding immigrants specifically native to the Americas to learn English, but the counter to that is actually no. What are people doing to learn the languages of each particular landscape that they live within, languages that have existed long before the United States? It’s there and it’s accessible… Where do people sit in that discomfort of not knowing what I say in my lyrics?” Lawrence said.

Lawrence is an artist of many genres from hip-hop and R&B to soul and spoken word poetry. The Indigenous vocalist graduated with honors from the University of San Francisco, earning a bachelor’s degree in Performing Arts & Social Justice and a concentration in Music. She released her first solo album “Epicenter” in 2018, which included fan favorites such as “Songbird” and “Don’t Count Me Out” featuring Indigenous vocalist Desirae Harp.

Based out of Ohlone territory, Lawrence expresses her gratitude for the Yelamu people who have lived along the San Francisco Peninsula well before the arrival of Spanish missionaries.

“Ohlone peoples are strong, resilient stewards of this territory. Even through genocide they’ve cultivated and maintained a beautiful place for all of us who are here to prosper in today’s world. As guests, our duty is to sustain their visibility and leadership,” Lawrence said.

A vocal advocate for movements such as “Stand with Standing Rock” and “Protect Mauna Kea,” her rhymes often speak on the social and environmental injustices that have impacted Native communities.

“Mauna Kea is one that the whole world needs to be watching because it will be a deciding factor in the way we move forward,” Lawrence said.

The fate of Mauna Kea remains unclear as thousands of Kanaka Maoli (Native Hawaiians) continue their decade-long fight against a $1.4 billion observatory slated for construction on their most sacred mountain. If built, the Thirty Meter Telescope (TMT), as it’s known, would become one of the largest telescopes in the world, standing 18 stories high.

“Mauna Kea is where I found a lot of my strength and permission from the land to do the healing I needed to do,” Lawrence said. “The family that I’ve gained from the land of Hawaii, the relationships that I’ve built, and the example they’ve set have really changed my life.”

Lawrence has become a recognizable force in actions back home as well, shedding light on treaty rights, the cases of missing and murdered indigenous women, and the misrepresentation of Native Americans in mainstream media.

Reigning from her territory is “No LNG in 253” which represents the area code for both Tacoma and Puyallup Indian Reservation residents. In 2016, Puget Sound Energy (PSE) announced plans to build an 8-million gallon liquefied natural gas (LNG) plant at the mouth of the Puyallup River. Today, the project is one step closer to completion, despite ignoring protections guaranteed to nearby tribes under the 1854 Medicine Creek Treaty.

“If we don’t inform our own people about our rights, our obligations, our autonomy then that gets lost,” Lawrence said. “There’s so many ways we can get creative about spreading the word or lending our voices, resources and bodies, but this is gonna be one of those times where it’s the last stand to protect water, air, our Earth and all life sources from capitalism.”

As a child who grew up in the foster care system, Lawrence understands what it’s like to be a young person and feel as though you are not advocated for. But with all that’s happening in the world she remains optimistic, inspired by the leadership of younger generations and determined to help uplift their voices.

“We have to think of what our actions today will do and be for young people,” she said. “Thinking of them in our decisions keeps us going and it’s a teaching we need to honor.”