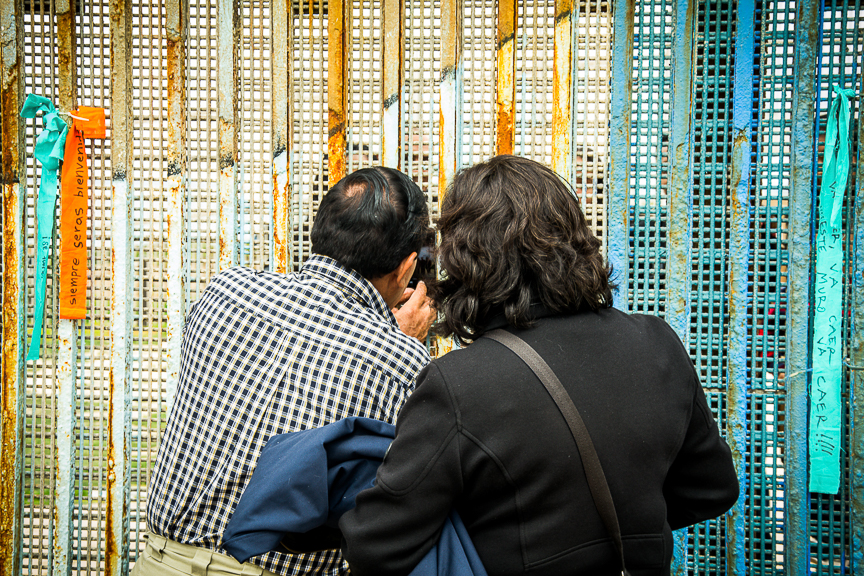 On a Sunday morning in March, Braulio Mayer met his seven grandchildren for the first time, and was reunited with two of his grown children whom he had not seen in 10 years. Mayer desperately wanted to hold his grandkids, but the U.S.-Mexico border wall stood in the way.

“Impotence, just impotence,” is how he described the feeling.

The family met up at Friendship Park, a half-acre plaza that the U.S.-Mexico border wall runs right through the middle of. On weekends, the park is a meeting spot for people who have been separated from their loved ones by the wall. It’s just a stone’s throw from the Pacific Ocean, where the border wall reaches its western limit.

The section of the wall that bisects Friendship Park is a metal grid so restrictive a pinky finger can barely fit through. People on the other side look like shadowy figures. Pressing one’s cheek against the rusted metal is the only way to get a clear view of a loved one’s face on the other side.

Standing on the Tijuana side, Mayer pressed his camera phone up against the border fence. He carefully lines up the camera’s lens to a hole on the metal grid to get a clear photo of his children and grandchildren standing on the U.S. side of Friendship Park.

On the Mexico side of the border with Mayer stood his wife, Juana Castillo, who lives in  California with the couple’s children and grandchildren. She traveled to Tijuana to offer Mayer moral support during this visit. “One step is all that divides our own blood,” said Castillo.

The couple immigrated to the U.S. undocumented in 1990. They lived this way until about 10 years ago, when Mayer’s mother in Mexico City became ill. He had to make the impossible decision to leave his wife and children in the United States so he could be at his mother’s bedside, knowing he might not be able to reenter the country. Mayer has remained in Mexico City ever since.

Castillo eventually gained her U.S. residency and is now able to travel to Mexico to visit her husband. “I can’t move there [to Mexico] and leave my kids, and he can’t come in [to the United States] because he doesn’t have documents,” said Castillo.

The couple has a third son in the United States who did not visit Friendship Park that day. Because their son’s immigration process is not yet complete, he fears entering the U.S. side of Friendship Park. Here, U.S. Border Patrol officers check the identification of anyone who wishes to access the park, then hover over people’s shoulders during these emotional visits.

“God did not make this,” said Castillo as she looked at the border fence. “These are prison bars and we don’t know which side is the jail cell.”

U.S. Border Patrol limits visitation time at Friendship Park to Saturdays and Sundays from 10 a.m. to 2 p.m. Only 10 adults are allowed to access the park at any one time. If more than 10 visitors show up, the rest are made to wait outside until someone else leaves.

On weekdays, the area remains mostly deserted except for Border Patrol vehicles that occasionally drive along the wall. The militarization of the border becomes even clearer at night, when a series of blinding stadium lights point south while multiple cameras survey the landscape at all hours.

By contrast, accessing the border wall from Tijuana comes with no restrictions. Anyone can walk up to it, at any time of day or night, and stay as long as they wish. The area is often a buzz of activity with local joggers, tourists taking selfies, and children frolicking on the beach.

But this coastal section of the border wasn’t always a militarized environment.

When Friendship Park was inaugurated in 1971 by first lady Pat Nixon, it was divided by a barbed-wire fence through which Nixon shook hands with Mexicans on the other side. “I hope there won’t be a fence here too much longer,” she said on the day of inauguration.

It wasn’t until 1994, amid an anti-immigrant hysteria—which included California’s anti-immigrant legislation Proposition 187, which was heavily backed by then Republican Gov. Pete Wilson—that a 14-mile fence was constructed on the border between San Diego and Tijuana. Security increased over the coming years, but Friendship Park remained a meeting space.

Back then, visitors could stick their arms through the wall and hug someone on the other side, and could even exchange gifts and shared meals. But in 2009, a U.S. Department of Homeland Security (DHS) restructuring plan completely sealed off the park to visitors.

Around that time, architect Jim Brown was studying the coastal border region and created some conceptual designs for a binational park. He was approached by Friends of Friendship Park, an organization that advocates for greater access to the area. The group needed someone with Brown’s expertise to correctly read drawings prepared by DHS and to offer their own proposals to the agency.

For a brief period in 2010, Border Patrol agreed to reopen Friendship Park during weekends, but with major restrictions to Brown’s original design. Hugging through the fence would no longer be possible due to the addition of yet another fence that kept visitors several feet away from the primary border wall. Visitors also now had to enter the park through a new outer gate.

Brown, whose design proposals allowed for visitors to walk right up to the fence at Friendship Park, was highly critical of the additional barrier that separated visitors.

It was “like a cattle herding mechanism, it was terrible,” Brown said. Border Patrol agreed to Brown’s proposal of removing the additional barrier, with a compromise that included a tight mesh to prevent the passing of items through the fence.

Brown’s redesign allowed for the reopening of Friendship Park in 2012. Except for a brief closure period in 2017, the park has remained open ever since.

Today, the design remains restrictive, visitors can barely stick their fingers through the steel mesh. Locals coined the term “pinky kiss” to describe the only physical contact that is possible through the wall.

Friends of Friendship Park are currently promoting an online petition for a redesign of the park that would allow increased physical contact for visitors on both sides. Volunteer Roberto Vivar described the proposal as a space where visitors “can hug, share a meal, and be a family, even if just for a few hours on the weekend.”

The specifics are still being worked out by Brown, who in October will release his design proposal for a “truly binational park.” While public support is helpful, an act of Congress will be necessary to approve it.

Despite the current administration’s campaign for increased militarization of the border, activists are hopeful. “With Trump, we know he’s full of hate, of racism,” said Vivar. “Well, he’s not the one who gets the last word, that’s up to God.”

Jesus was a refugee

Vivar was six years old when his family moved him from Mexico to California. As an adult, “I was very productive, I worked,” he remembered. But he got into trouble when “like many people, I started experimenting with drugs.”

Six years ago, drug possession charges led to Vivar’s deportation. After a few months stranded in Tijuana, “I felt something was missing. I couldn’t adapt, and I searched for something that would help me face each day’s challenges.”

Vivar turned to Border Church, a group that organizes a bilingual, binational spiritual service in Friendship Park. He’s been a volunteer with the church ever since.

Every Sunday, volunteers arrive to the Tijuana side of Friendship Park with folding tables, canopy tents, bread and wine. A pastor on the U.S. side gives a sermon in English, which Vivar, standing in Tijuana, translates sentence by sentence into Spanish.

When El Tecolote visited the Tijuana side of Friendship Park last March, Pastor Seth David Clark recounted the story of when king Herod ordered the killing of baby Jesus, prompting Joseph to take Mary and Jesus out of Bethlehem.

“We see that they need to run away for their lives,” Pastor Seth told the crowd. “They had to run to a new country, to Egypt, a place they don’t know… a place that is not home.”

“Jesus was a refugee,” he continued. “Along with his parents, Jesus was someone who had to seek asylum… some of us here today might be far from home. Some of us today might be seeking asylum, and we see in the story that Jesus, Mary and Joseph, they did it too.”

Pastor Seth finished his sermon by encouraging the crowd to touch the border wall, and then to reach for the heavens. “The sky has no borders, the sky has no limits.”

Every Sunday this little section of the border wall in Tijuana gets filled with musicians and food carts selling churros. But despite the local’s best efforts to create a festive environment for tourists, an overwhelming sadness fills the air as visitation hours on the U.S. side of Friendship Park reach closing time.

Watching families say their goodbyes is excruciating. Many will not see each other again for years. Visitors on the U.S. side exit the park, while those in Tijuana hold tight to the posts along the border fence, powerless as they watch their loved ones on the other side walk away.

Border architect Jim Brown is hopeful his upcoming redesign proposal for Friendship Park will allow for a better connection across countries to, as he said, “maintain a close friendship with our southernmost neighbor … that provides much more security than two walls ever could.”