Our Twitterer-in-chief is begging to be taken down 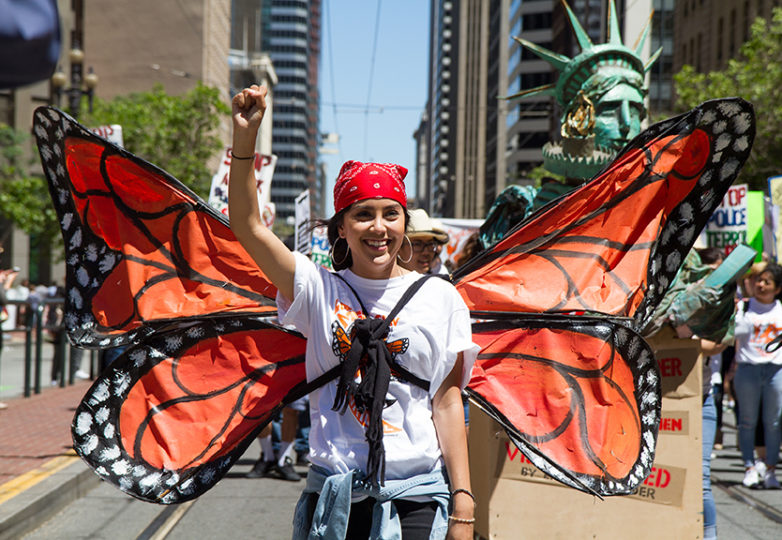 San Francisco State University student Velinda Wallace raises her fist during the May Day march on May 1 from Justin Herman Plaza to to San Francisco City Hall. Wallace wears butterfly wings as a symbol of migration. Photo: Drago Renteria 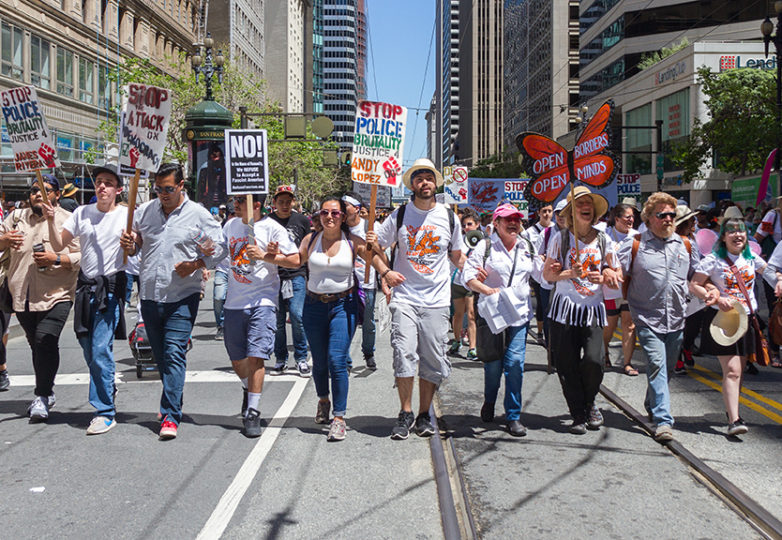 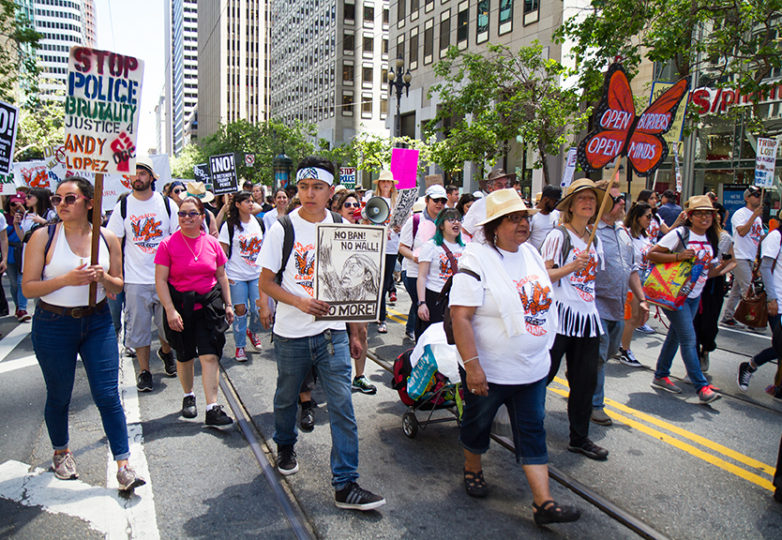 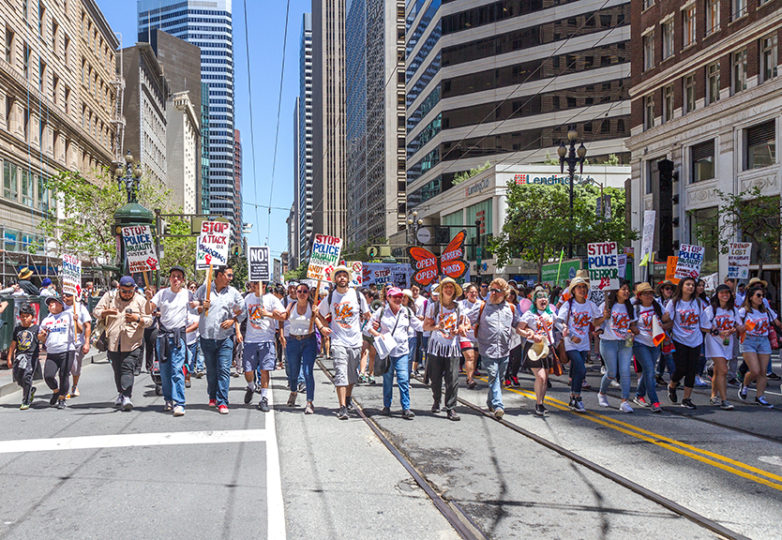 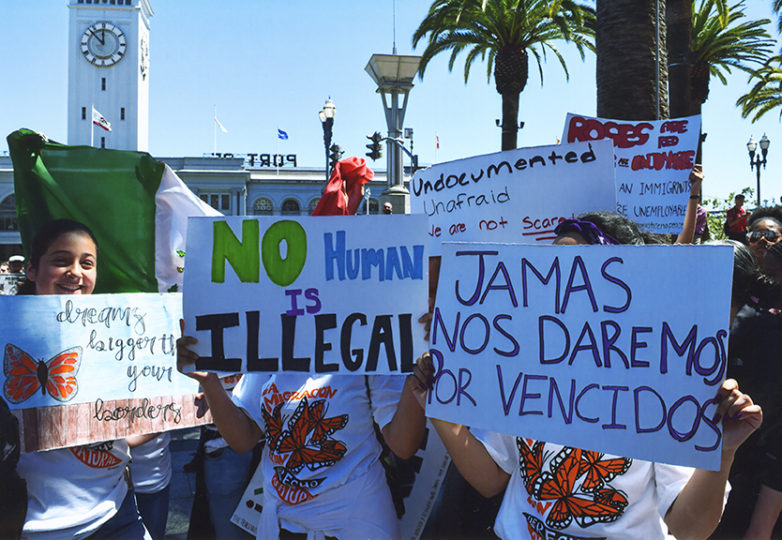 San Francisco State students participate in the “A Day Without Immigrants” rally at Justin Herman plaza on May 1. Photo: Jorge Bañuelos 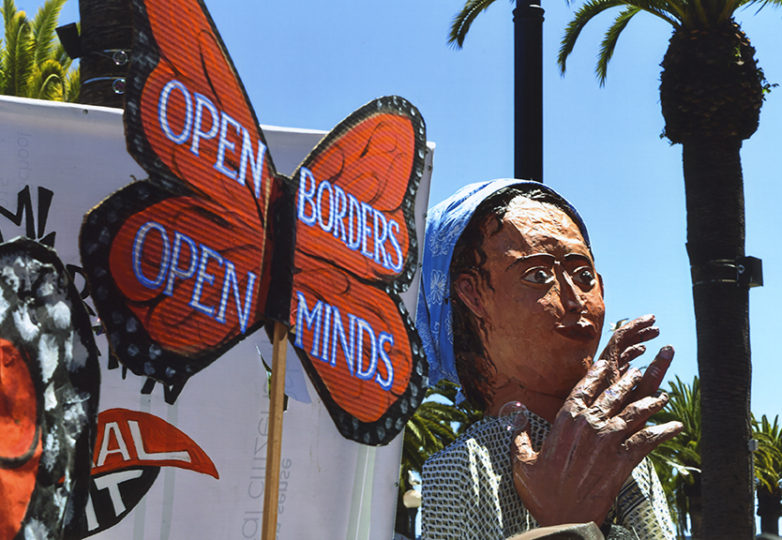 Last January, as The Pussy Grabber entered the White House and became the 45th president, I was entering my class at San Francisco State University, where I would be teaching a course called “Oral History and Traditions,” in the Latina/o Studies Department.

I had a good plan for the semester. After all, I had successfully taught that class a few times, over 10 years, before transferring to a different college, where I taught theater. I had 40 students, mostly young women, 99 percent Latina/o.

The First thing I did was rearrange their seating into a large circle. That facilitated engagement by eliminating the relative “safety” of the traditional seating, where rows of students sit behind and in front of fellow classmates.

Anonymity and hiding out would not be encouraged.

The new seating arrangement was also an attempt to control what has become a malaise in the contemporary classrooms: addiction to the cell phone. It took me just a few minutes to realize that something was not working, because a few students were still glued to those phones up to the very moment when the class began. Later, I saw some of them stealing glances at their addictive apparatuses. When I finished the class, I asked a couple of the students to stay behind and I questioned their stubbornness.

The answers they gave alarmed me: They were checking the news, concerned about themselves, about their families and friends, reacting to the new immigration climate. “What will happen today?” “Will my parents be safe?” “Am I safe?” they asked. Their fear was palpable.

Fear and uncertainty were the prevailing feelings in that classroom. Something had to be done, and thus, I changed the plan for the semester.

The main focus for the class became planning to participate in the May 1 “A Day Without Immigrants” march  near the end of the semester.

The students would be invited to help to create giant paper-maché puppets and butterfly wings and attend on and off campus march and chant rehearsals. Before deciding to go ahead, I asked the students to vote whether they wanted to take part in the march. The vote was unanimous, in favor of participation.

We still had to deal with the fear factor. Some of the students were so-called DACA students, part of the Deferred Action for Childhood Arrival program created under the Obama administration, that allows children brought to this country by undocumented parents, to stay, to study and hopefully be able to change their immigration status.

At first, those DACA students did not want to participate in the march. In fact, many in the class, DACA or not, had reservations. Most had never participated in a march or in a demonstration. They were what I call “survivor students,” who had behaved well, generally acquiescing and barely creating any waves that would jeopardize their immigration status. Most of them were juniors or seniors, in my opinion, due for a positive shake-up.  Participation in that kind of public event would do a world of good to their souls.

May 1 finally came, and it was an amazing success. Most (not all) of my students participated in the march—even the DACA students. The fact that it was a sunny, loud, positive, family-oriented affair, helped.

To end this column, I want to share some of what my students wrote for their final assignment.

“I was able to fully enjoy my first protest. There’s a difference between saying you’re going to do something to make a change and actually getting out on the streets to make a statement.” — Destiny A.

“I had never participated in a march. I was overwhelmed a bit, but looking forward to taking part. My dad asked if he could come with me and I told him, ‘Yes!’ In the back of my mind I was wondering what was going through his mind and I was happy that he was being brave enough to participate. Having undocumented parents, I worry about them a lot and this just demonstrates how much my parents mean to me. I do not spend enough quality time with my dad. In “A Day Without Immigrants” we were both brave enough to come out for the first time.” — Alejandra B.

“Every time we chanted ‘Education not deportation’ my eyes got watery and my heart sunk. How many students have gotten deported, before even getting a chance to go to college? How many brothers, sisters, parents?  I felt like my voice was finally doing something that I’ve wanted to do with it for sometime now, and that is to speak what others couldn’t and to represent the people who wish they were there with us.” — Jacqueline C.

“With this march, a change was made in me, a change in the way I act and will do things from now on. I got the opportunity to wear a pair of wings to fly around without limitations or enclosures and that’s exactly what our voice can do: scream, and scream loud!”  — Velinda W.

I would say that our march against fear was memorable. I am happy and proud of my students.

What Deferred Action has achieved and what we stand to lose