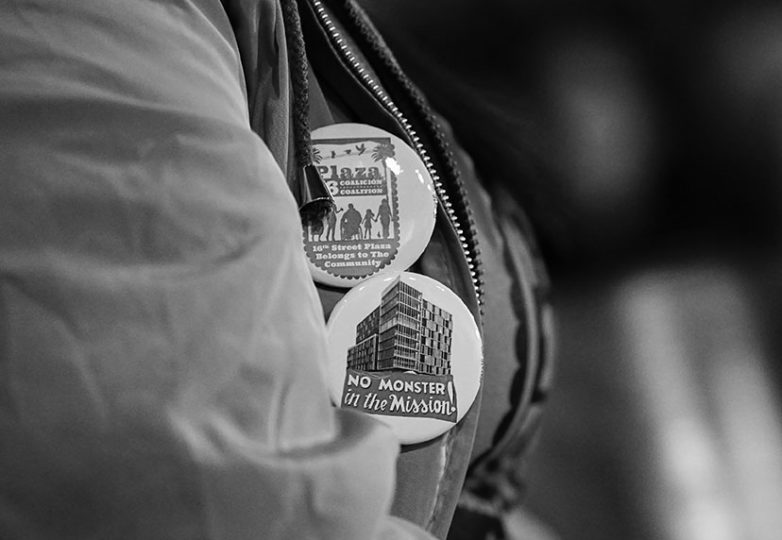 Community members gather at Mission High School on Feb. 7, 2019 for the Planning Commission hearing on the controversial “Monster in the Mission” development. Photo: Chris “L7” Cuadrado 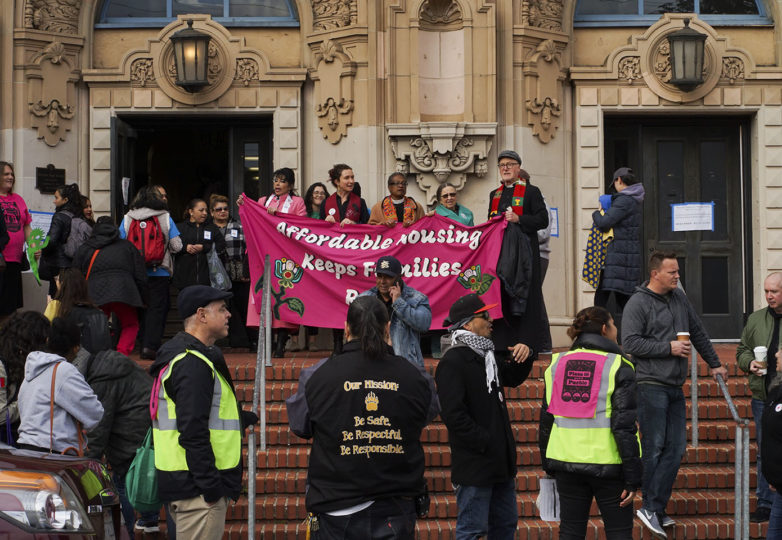 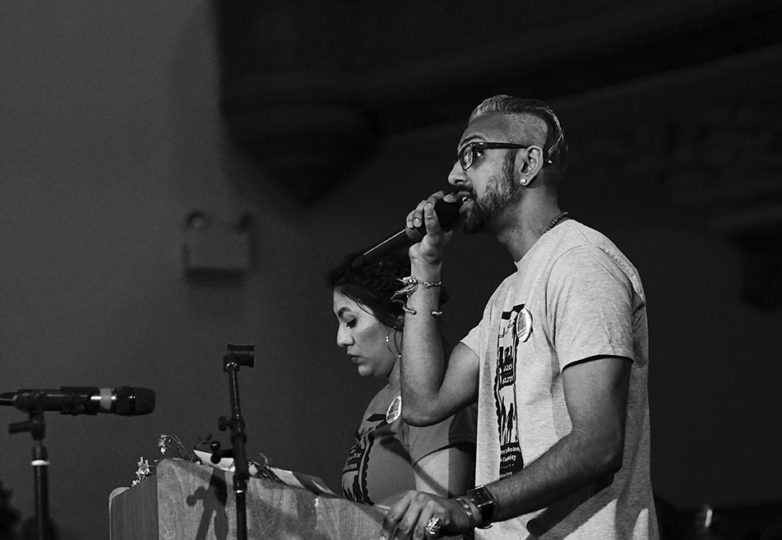 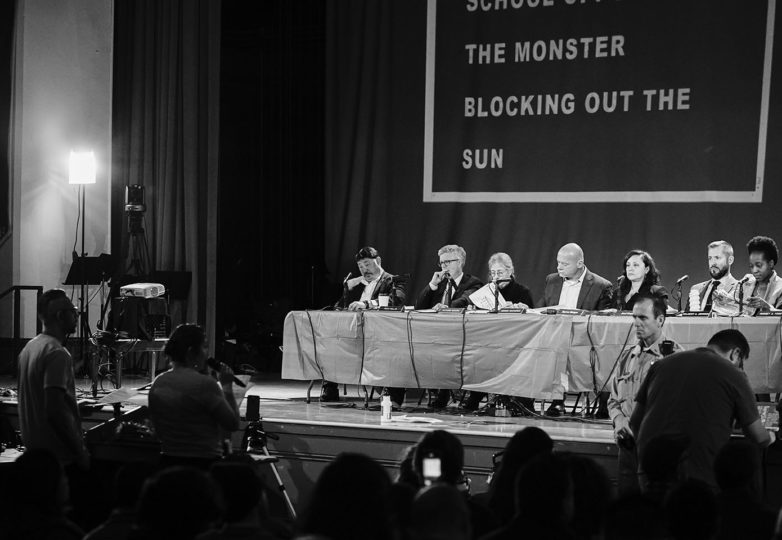 The recent San Francisco Planning Commission hearing on Feb. 7 was a rare chance to see its members in the field, as they came down from City Hall to hold a community meeting regarding one of the neighborhood’s most polarizing projects: the proposed development at 1979 Mission St.

Despite not yet having even broken ground, the massive residential and commercial complex dubbed “The Monster of the Mission” and slated for construction at 16th and Mission Streets, has thoroughly divided community.

The company behind the monster, Maximus Real Estate Partners, currently has plans for sprawling complexes all across the Bay Area. In the Mission District, it’s laid groundwork with a mix of bare-bones local companies and community outreach, partnering with the SFPD in the dubiously named “Clean Up the Plaza” campaign, and setting up two other organizations: 1979 Mission, a group tasked with reaching out to the community for input on the planned construction of the monster, and Mission For All, which has recruited neighborhood people to advocate and influence at a grassroots level on Maximus’ behalf.

This includes an art show highlighting local artists, secretly subcontracted out by Mission For All, and social media campaigns featuring Mission for All employees handing out food to the homeless and donating bags of used clothing, and even allowing graffiti artists the freedom to put up murals in a building Maximus hopes to raze and replace with glitzy, high-end studio apartments and boutique shops and cafes.

An earlier planning commission hearing had been scheduled for Nov. 1, 2018 at Mission High School, but it was abruptly cancelled following the bizarre incident of a phone call made by alleged affiliates of Maximus. Without evidence, they predicted violence at the hands of the monster’s chief opponent, the Plaza 16 coalition, a collection of concerned local businesses, residents and community advocates. This lead organizers to reschedule the meeting. Most residents who were aware of the incident entered the Feb. 7 meeting skeptical of Maximus and its multi-million dollar aims.

The demonstration stood in stark contrast to the pro Monster event around the corner. There the stone-faced representatives from Mission For All’s “1979” posse, a group mostly made up of union workers slated to work on the project, men and women in dusty clothes and heavy boots. Many of them held hand-painted signs, each with a wide array of colors, languages, and slogans—a surprising departure from their dour, almost somber mood. Despite the creativity and diversity of the signs, the best chant they could muster was a repetitive, familiar, and ominous, “Build it.”

The planning committee meeting began promptly and orderly. The respective groups self-segregated, the Maximus folks at the right side of the auditorium, and the various community groups and locals spread across the middle and left sides.

Committee President Myrna Melga opened the meeting with a plea for civility and gave each side a 10-minute window to present their points and counterpoints, followed by testimonies from individuals in support and against. Maximus to its credit delivered a polished presentation with renderings of a building one could imagine glittering above the 16th Street BART Plaza. It featured the latest concessions to the community, including a finely landscaped bougainvillea (ornamental climbing vine) spreading across the front of a glass-faced highrise, new street lights, more color, an expanded plaza, widened sidewalks, and a finely calibrated set back of the building in an attempt to lessen the building’s impact on neighboring Marshall Elementary School.

Plaza 16 then gave its interpretation, presenting a plan for a development called “The Marvel,” a 100 percent affordable housing complex and green space, that would be funded through various bonds and appropriations at local, city, and state levels. Plaza 16 quickly pointed out that Maximus’ claim of providing up to 40 percent of the units at below market rate was false, when considering that the monster itself from Maximus’ own numbers promises less than 15 percent of such units.

Hamilton: Riff Off or Rip Off?

Perhaps Maximus’ numbers included potential sites previously proposed at 2675 Folsom and 2918 Mission, neither of which Maximus has actually vowed to put a penny toward securing, much less plan, fund, or build. Plaza 16 used this as further proof of Maximus’ duplicity and willful dishonesty. The sidewalk and plants, while nice, don’t really help anyone in the community. As Chirag Bhakta closed out Plaza 16’s roundhouse of a reply, he voiced the palpable frustration and anger in the room: “The dirt is not useful to us.”

When it came time for individual testimony, plea after plea was voiced against the monster, Many decried the stress and struggle it takes to live in the Mission as it is, the impact the development will have on the surrounding schools and buildings, and the city’s long history of redlining districts, forcing increased density and new developments, mainly on poorer communities of color. Time and again, people recounted family, friends, neighbors and businesses who have been forced out of the neighborhood, out of the city, the neighborhood’s needs and demands far outpacing their ability to pay them.

The most compelling arguments to be made on the monster’s side boiled down to the old YIMBY (yes in my backyard) argument of, “we need housing and the only way to get housing is to build housing”—a pithy but simple response to a complex, and deeply intersectional problem. More so than the tales of opposition from regular folks, it seemed Maximus’ careful talking points about parking, art, commercial opportunities, cosmetic improvements, and mitigation to the monster’s impact on neighboring buildings were carefully spread across many people. This felt like a group that knew it was outgunned and outmanned by the community and so tried to spread its few bullet points to as many people as possible.

By the end of the meeting, the planning committee seemed convinced that Maximus wasn’t living up to the neighborhood’s expectations and so it asked Maximus to return with a plan created alongside the Mayor’s Office of Housing and Community Development. The next day Plaza 16 claimed the monster was defeated, but this seems premature given the devious tactics and foul play to which Maximus has already demonstrated it will resort. Furthermore Maximus is highly unlikely to concede with so much cost already sunk into the project and the millions of dollars on the table. It takes far more than a single blow to defeat a monster of this size.