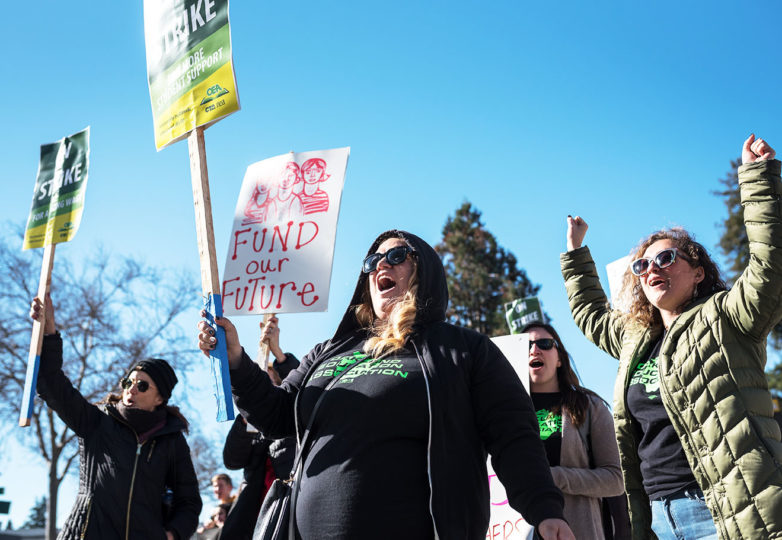 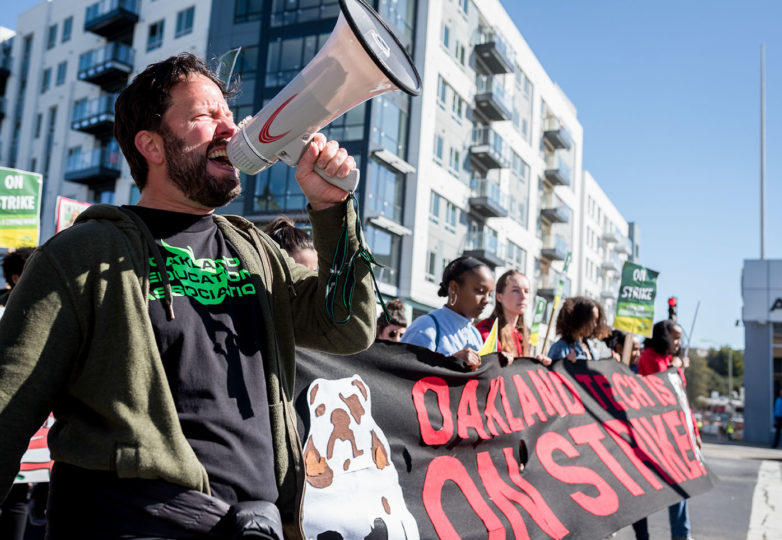 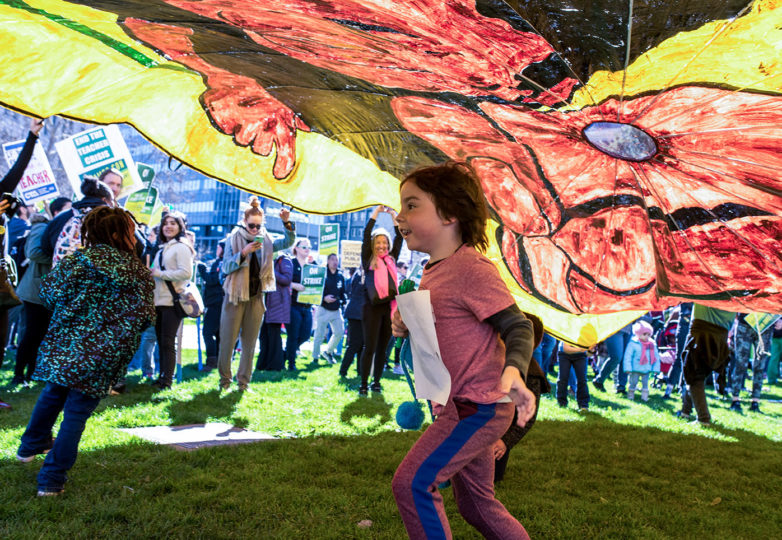 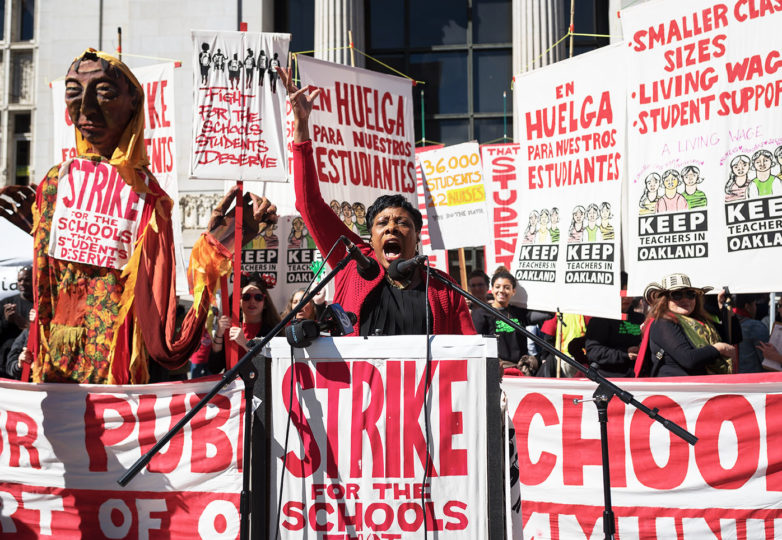 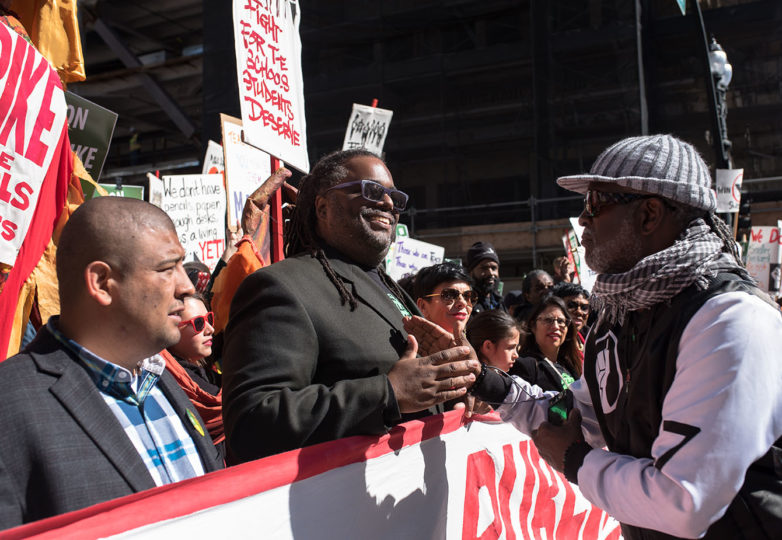 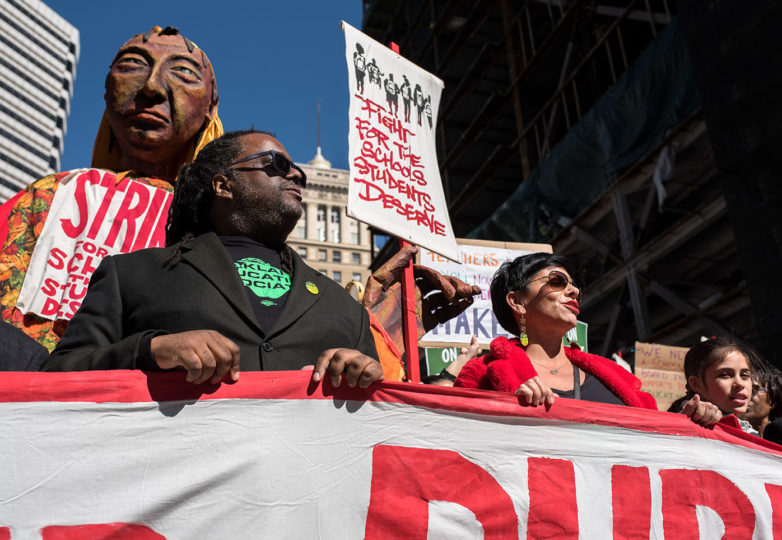 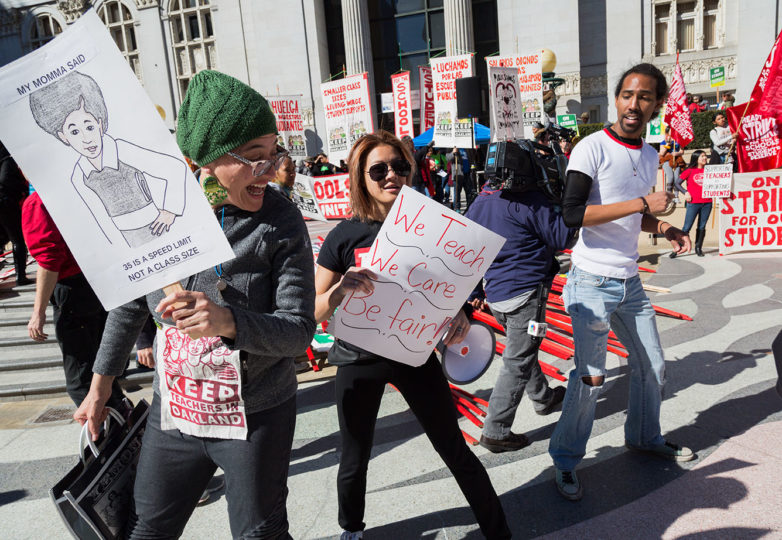 Dina Suarez, a teacher at La Escuelita in Oakland for two years and resident of Oakland dances to the music at the rally for the Teachers Strike at Frank H. Ogawa Plaza, Thursday, Feb. 21, 2019 in Oakland, Calif. Suarez’s sign reads: “35 is a speed limit, not a class size.” Photo: Amanda Peterson 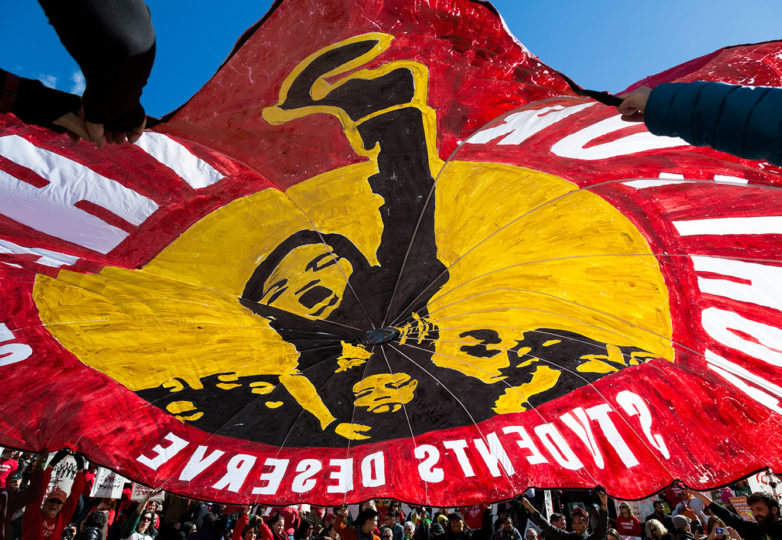 A parachute artwork is fanned out by demonstrators at Oscar Grant Plaza to show support for Oakland teachers, who are now on strike, Feb. 21, 2019. Photo: Amanda Peterson 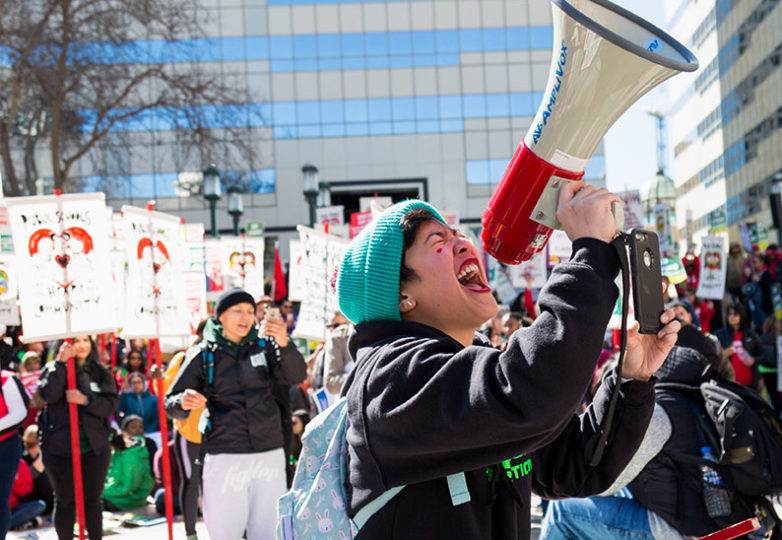 Donna Salonga, yells into a bullhorn during a rally at Oscar Grant Plaza on Feb. 21 in support of Oakland Unified School District school teachers, who are currently on strike. Photo: Amanda Peterson 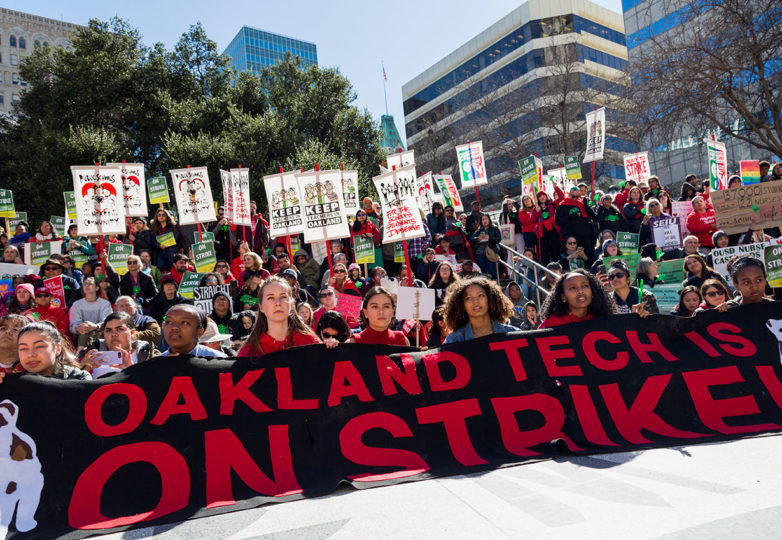 Students at Oscar Grant Plaza hold a sign at a rally for Oakland teachers on strike that reads: “Oakland Tech is on Strike,” Feb. 21, 2019. Photo: Amanda Peterson 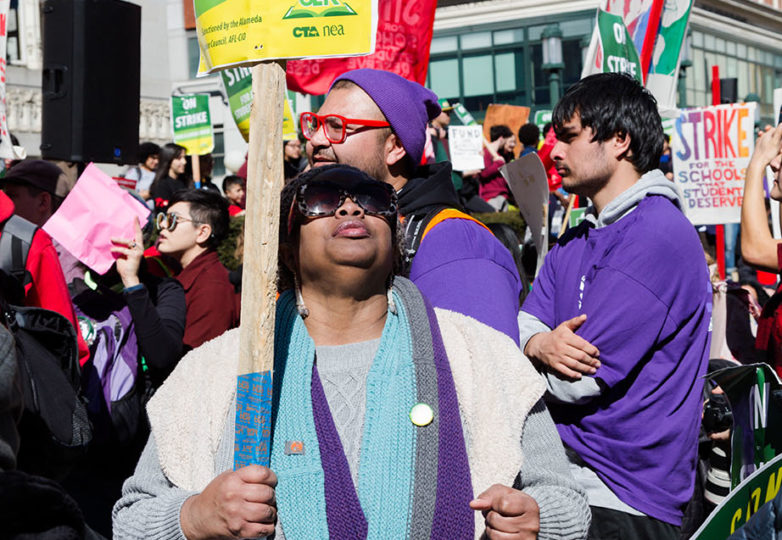 A woman holds an “On Strike, Against School Closure” sign at a rally for Oakland teachers who are now on strike, Feb. 21, 2019. Photo: Amanda Peterson 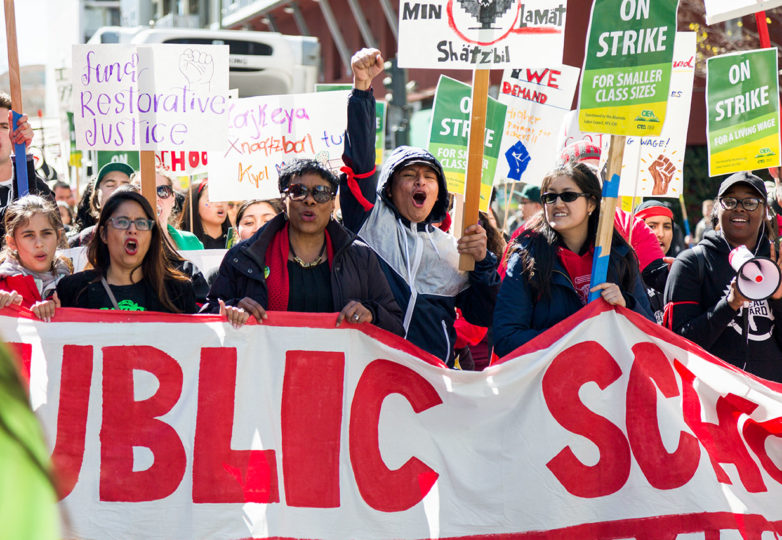 Marchers show their support and enthusiasm at a rally in downtown Oakland, for teachers who are currently on strike, Feb. 21, 2019. Photo: Amanda Peterson 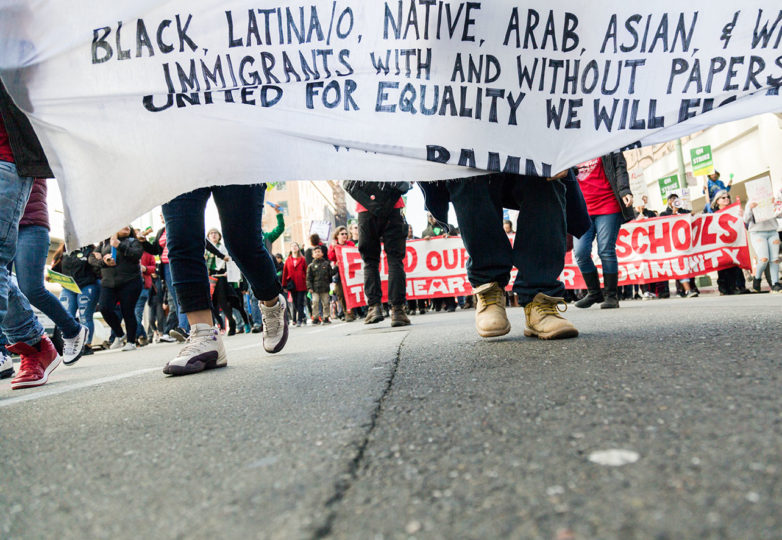 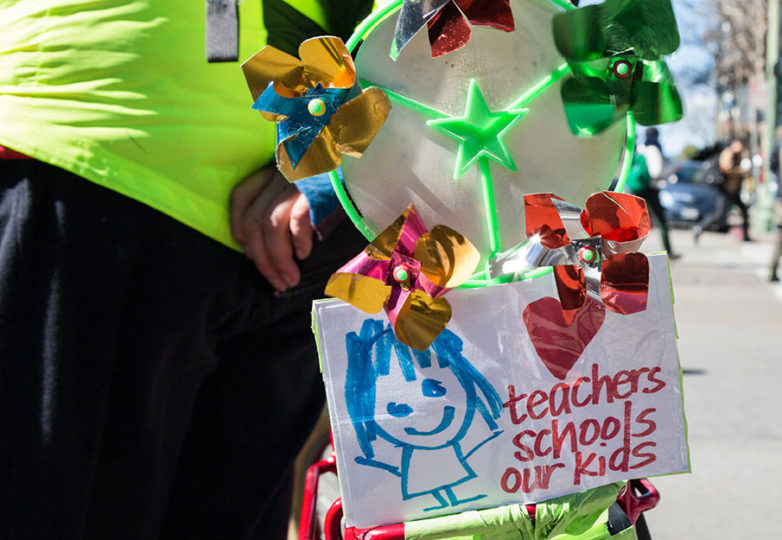 “Teachers, schools, our kids” reads a sign on the back of a bicycle at the a rally for Oakland teachers who have gone on strike, Feb. 21, 2019. Photo: Amanda Peterson

“This is a historical moment in the city of Oakland, where across this city[‘s] 86 school sites, teachers together with parents and students and community shut the district down!” Oakland Education Association (OEA) President Keith Brown said to the gathered crowd of faculty, staff, students, parents and allies.

Accompanied by live music from district teachers and chants from rally-goers, union organizers led the congregation in a march down Oakland’s Broadway Street to the Oakland Unified School District (OUSD) office building. Periodically, the demonstrators chanted in unison: “Hey, hey, ho, ho, where did all the money go?”

District teachers, who have worked without a contract since July 2017, earn among the lowest pay for Bay Area teachers, despite working in a district where the cost of living is equally high to that of other Bay Area cities. OUSD nurses and counselors have long advocated for smaller caseloads. But the district itself is struggling to to close its $30 million shortfall for the 2019-20 fiscal year and to avoid a state takeover like in 2003.

Oakland teachers are advocating for a 12 percent retroactive raise to cover 2017 to 2020, but every 1 percent salary increase for teachers would cost about $1.9 million, according to a fact-finding report commissioned by the OUSD.

Although the union has advocated to create funds by cutting high administrator and consultant pay, OUSD spokesman John Sasaki said the math is in the minutiae. In the two and a half years he’s been with the district, OUSD has eliminated many leadership positions to tighten its budget, he said.

And although the district has about $67 million in related contracts, $40 million is restricted one-time funding; $11 million goes to state-mandated special education transportation; $4.5 million goes to school contracts, such as principals and services to give schools some functional autonomy; and most of the remaining $11.5 million goes into necessary services such as business software for payroll. After those costs, Sasaki said, the district has $2 million to $3 million to work with.

Sasaki told the San Francisco Chronicle that during the strike, classroom activities would not be “business as usual.” But for those on strike, business as usual was unacceptable anyway. Three years of contract negotiations have fallen flat, and each year nearly one-fifth of district teachers quit, which compromises the quality of education and care for the district’s 36,000 students.

At Claremont Middle School, multimedia and yearbook teacher Daniel Leal said there are only five teachers who remain from when he began four years ago.

“Every year I sacrifice to live in Oakland because I want to teach where I live,” said Leal, who has a daughter, and must weigh the cost of heating his apartment in the winter.

Jason Gilbertson said parents like himself end up getting involved because there are not enough teachers. Gilbertson works at Claremont as an “instructional support specialist,” a position that operates under the direction of a supervisor and performs specialized educational support services.

Meanwhile, OUSD teachers often teach classes of 30 or more students, which many teachers and students say makes it unlikely that students will receive the attention they need, particularly when teachers are less experienced or students are younger.

“There are some classes where some teachers don’t even know my name because there’s 30 students in a class,” said Milo Vetter, who is a sophomore at Oakland Tech. “ There’s no time to talk to all of the students.”

Allendale Elementary School speech therapist Laura Favela, who helps more than 60 students with language disorders or difficulties communicating, said the district has refused to grant speech therapists a student cap. To boot, not every school has a speech therapist; some are in charge of covering ground for four schools at once.

“It’s draining,” she said about her workload. “I think about the kids. I want to try to do as much as I can for them. I feel guilty because they’re getting the short end of the stick.”

OUSD nurses, who are contracted to provide services for 1,350 students, must also travel between schools to meet student needs. Sarah Boyd, the only registered nurse at Oakland Tech, has 2,000 students. She said dozens of schools are left without a nurse. The average pay, she added, is abysmal.

But her bigger fear is that one day, she won’t be there for a student who needs her.

“Every day, I sit in my office, and I wonder what’s going to happen today,” Boyd said. “It feels like a crushing weight on a daily basis.”

For Oakland Tech’s freshman counselor Theresa Langston, the caseload is 500 students to one. In addition to having five or six scheduled meetings daily, she meets with anywhere from 10 to 20 parents, teachers or students who drop in.

“It is definitely overwhelming,” Langston said. “Sometimes, students just get lost in the system.”

Former teacher and dean Krea Gomez, now a parent who pulled her child from OUSD for not meeting his needs, said before the strike that she would join to support her teachers. She did, however, worry for the families who most rely on school services.

“There’s going to be a time when a parent is going to have an ultimatum of, ‘You end this strike because I’ve got to send my kid back to school,’” she said.

But the Thursday protesters showed no signs of letting up. When keynote speaker Becky Pringle, the vice president of the National Education Association, took the stage at the plaza, she asked her crowd: “What are you prepared to do?”

The crowd shouted the response she called for: “Whatever it takes!”