Opinion: With free college we lead way to brighter future

Early in the morning of Jan. 25, as I turned on my computer I was surprised to see a livestream of an amazing event happening barely three blocks from the White House.

There, under unusually blue winter skies four women and three men had climbed onto a huge construction crane and were hanging from ropes, 300 feet above the ground. Once up there, the Greenpeace activists managed to attach and unfurl a 70-by-30 foot banner that eventually—after some rather dangerous looking maneuvering —swayed proudly in the cold morning air, displaying one simple word: “Resist.”

I was fascinated by the spectacle, a much-needed morale booster, following the inauguration of Donald Trump. It was like my hopes were also hoisted up there by those daring figures dangling on my screen.

And I was shocked when I realized I knew one of those daredevils. The woman wearing a SF Giants beanie under a hard hat was Nancy Pili Hernández, a well-known activist, muralist, dancer and longtime Mission resident.

A few days after the activists were released from an 18-hour stint in jail, we sat down for a conversation. 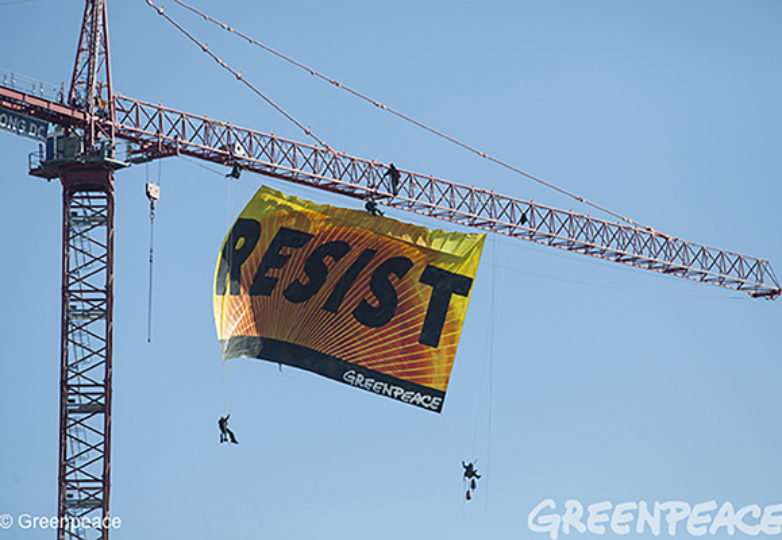 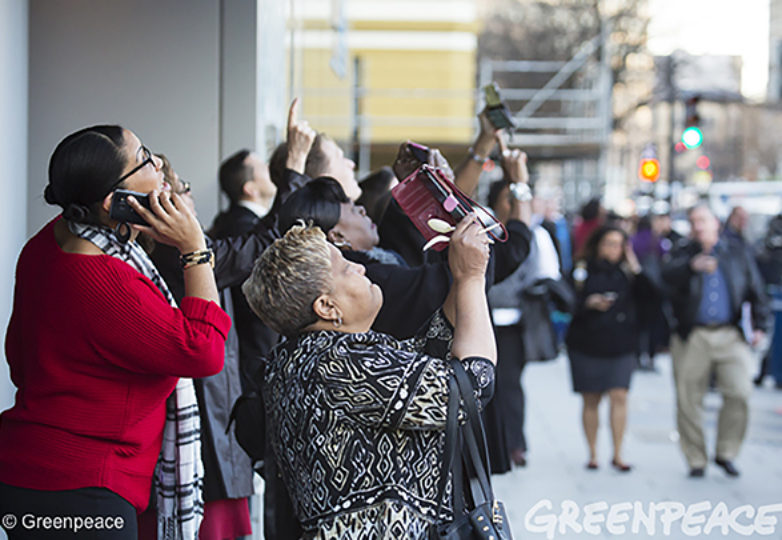 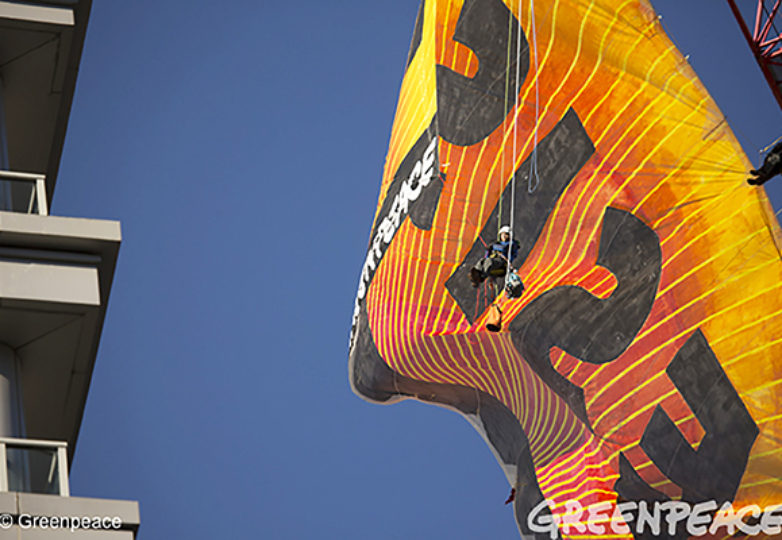 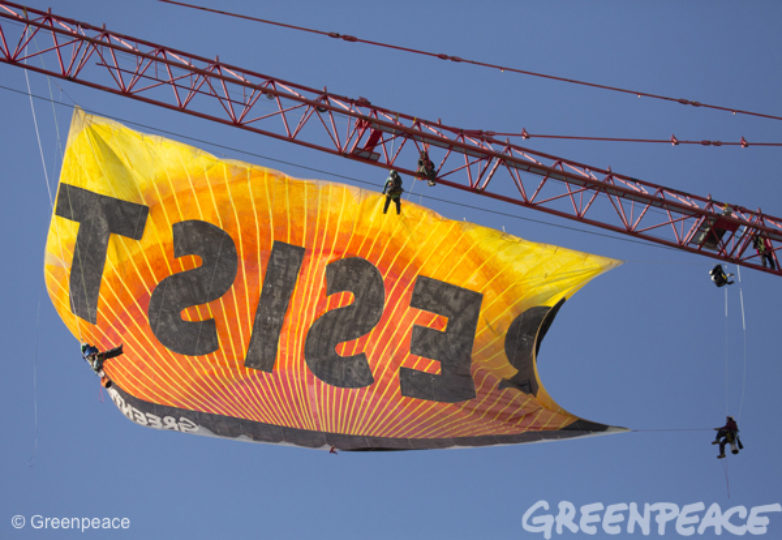 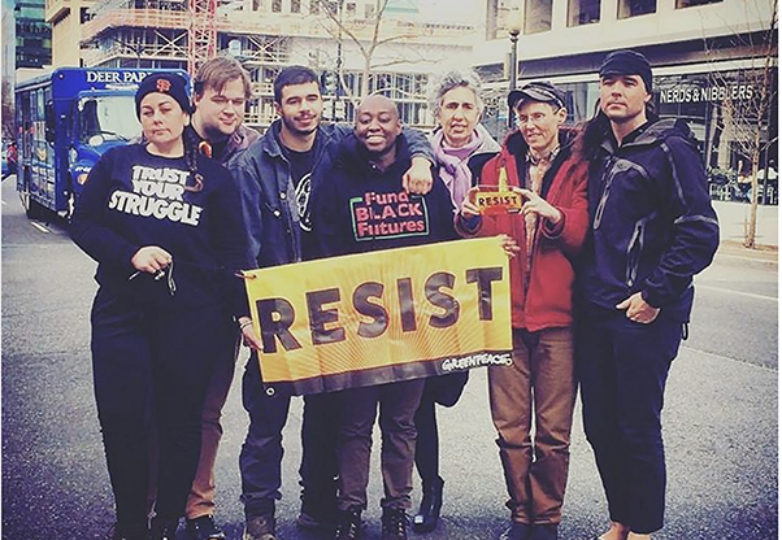 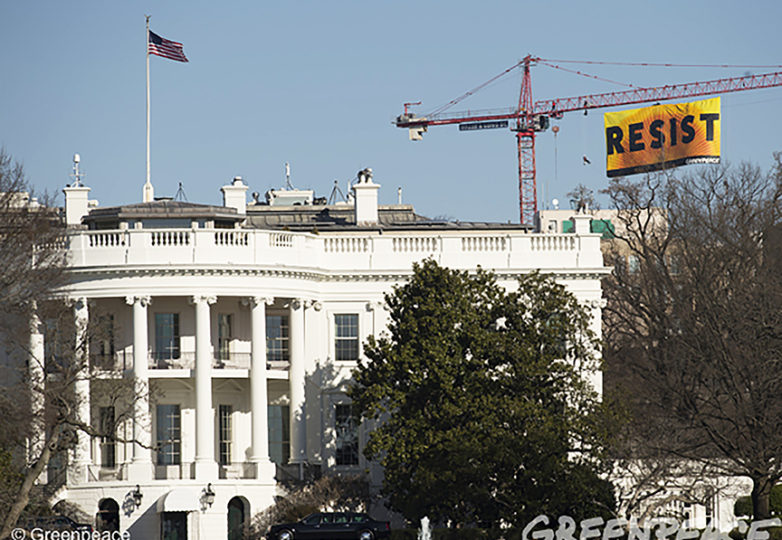 I learned that Nancy’s dad is a Mexicano/Chicano and her mom is from Ireland, and that it was her first time attempting to do a livestream on Facebook. She sounded proud of that technical achievement, but it paled when compared with the bravery of climbing up that crane. Besides carrying her own weight (“That’s a lot to carry!” she laughed) she also had a backpack weighing more than 70 pounds.

She also said that she has been a student (and participant) of civil disobedience since she was a teenager.

“This direct action was a proclamation, not only of what we intend to stop, but—more importantly—of what we’d like to see in the world. The banner did not say ‘F* Trump,’ or ‘Stop the pipelines!’ Our message was a message of hope! With it, we declared our intention to resist all attacks on our planet and on our people.”

She smiled often as she spoke.

I asked how they prepared for the action, but for legal reasons she couldn’t give specific details.

“All I can say is that one way to prepare was by walking up Bernal Hill with one niece in front and the other on my back, wrapped in my ‘rebozo.’” Her little laugh accentuated that memory.

Did she think of Alex Nieto as she climbed that hill?

“All the time! The hill feels different now.”

With my students at SF  State (where Nancy is an alumni) I recently discussed Latino heroes and heroines. One student said that women were barely mentioned in her classes, an issue we are trying to remedy this semester. In fact, I’ve invited Nancy to that class. She is proud that her action was very women-based. Up on the crane and down on the ground, where women led their support group.

I asked Nancy who qualified as a heroine in her opinion? Did she consider herself to be one?

“To me, a hero is the one who has the most experience acting on behalf of others,” she said. “It feels… weird, that some might think that of me. People that I don’t even know! Honored, but weird!”

Any fears? She said she thought—briefly—about her personal danger, but her main fears concerned “those people who were down there … threatened by the dangers of racist immigration policies … and those in the Mission going through gentrification.”

A brush with a mission: a conversation with Ray Patlán

In my opinion, her answer shows an amazing unselfishness.

What else did she think while up there almost 14 hours?

“I thought of my nieces, friends and family. Then, as the sunset was happening, I felt that I could look far into the future, past this administration,” she said, adding, “But we are not done! The day-to-day is needed!”

Finally, I was curious to learn what she took up there with her.

“We had a playlist, of course. Among the songs, ‘F*** Donald Trump’ by YG and ‘Cranes in the Sky’ by Solange. In fact, we all heard that tune as we got ready to descend.”

“Cranes in the Sky,” according to Solange herself, was inspired by construction cranes filling the skyline of Miami. To Solange, it was a sign of real estate gone mad.

I then understood why Nancy and her Greenpeace friends picked that song: “Well, it’s like cranes in the sky. Sometimes I don’t want to feel those metal clouds! Away, away, away, away!”

The cranes might eventually go away, but I hope that Nancy Pili Hernández, our “Homegirl in the Sky,” will remain in our collective memory, inspiring us to commit to a peaceful struggle.