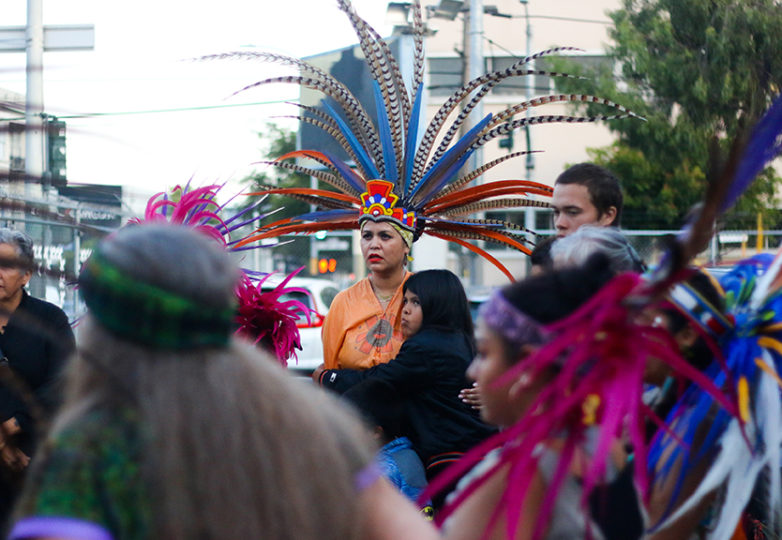 People stand in a circle for the traditional ceremony at Carlos Gutierrez’s memorial on Friday July 20 in the Mission District, San Francisco, CA. Photo: Erica Marquez 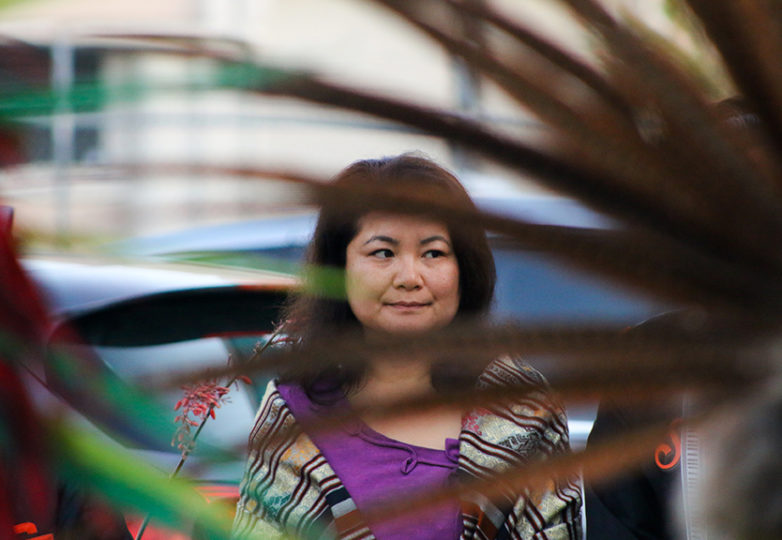 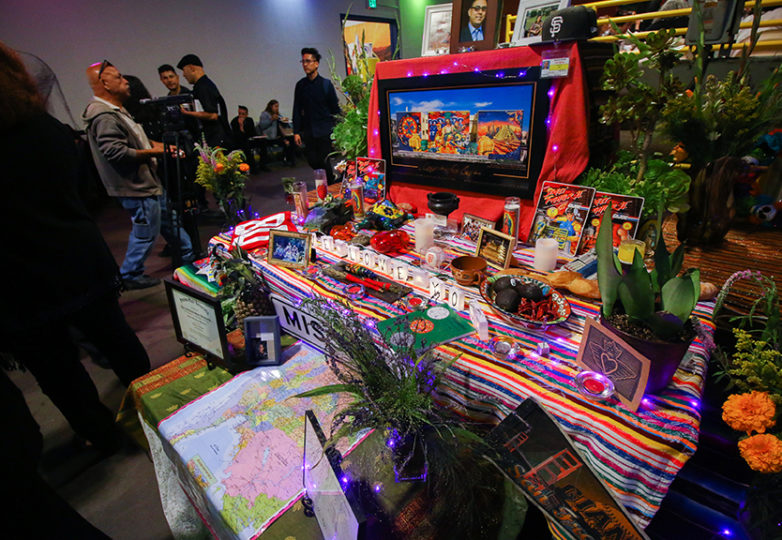 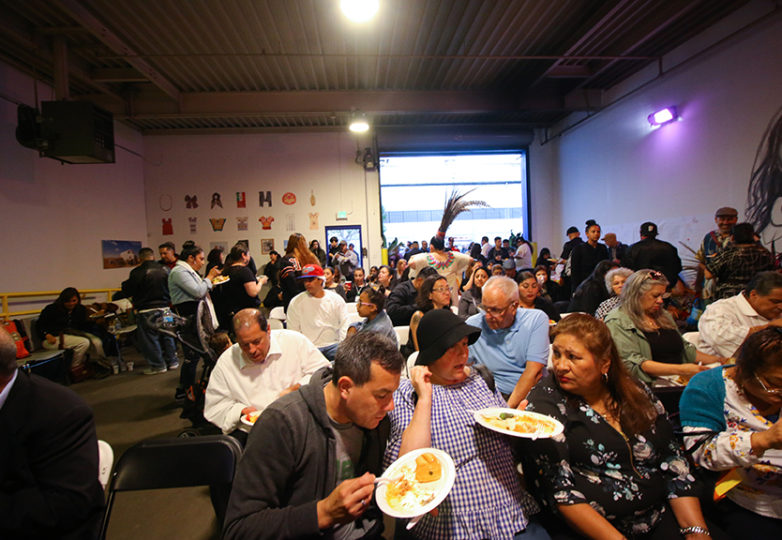 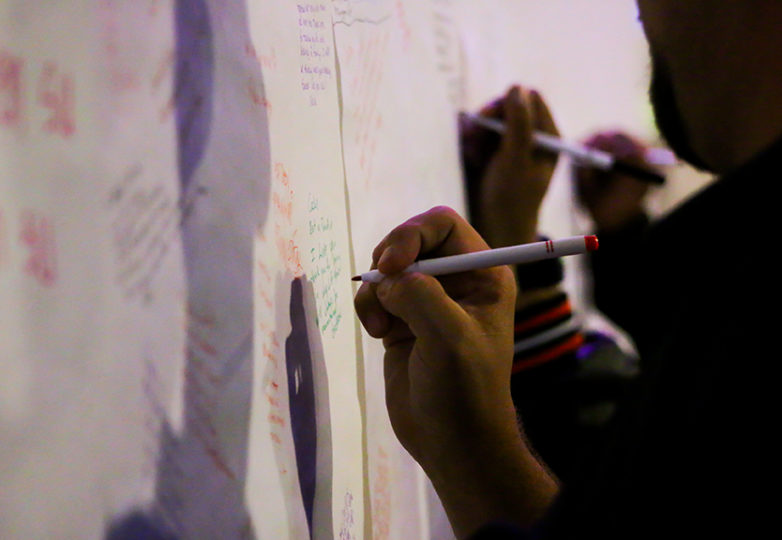 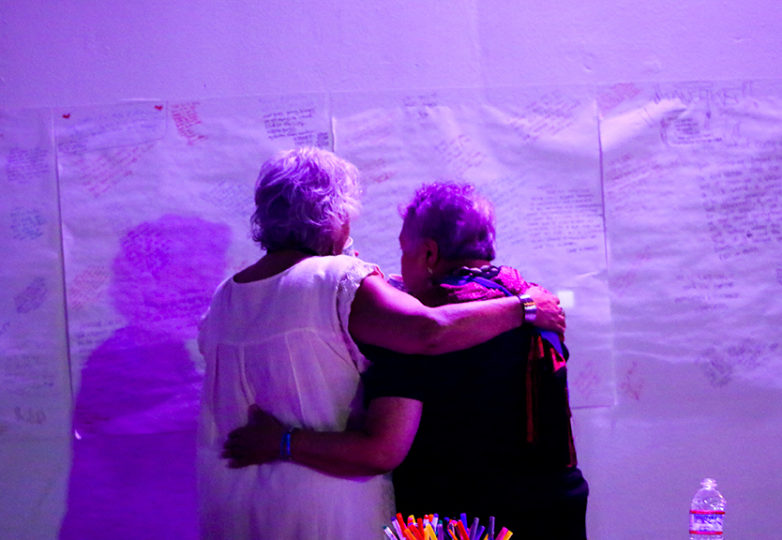 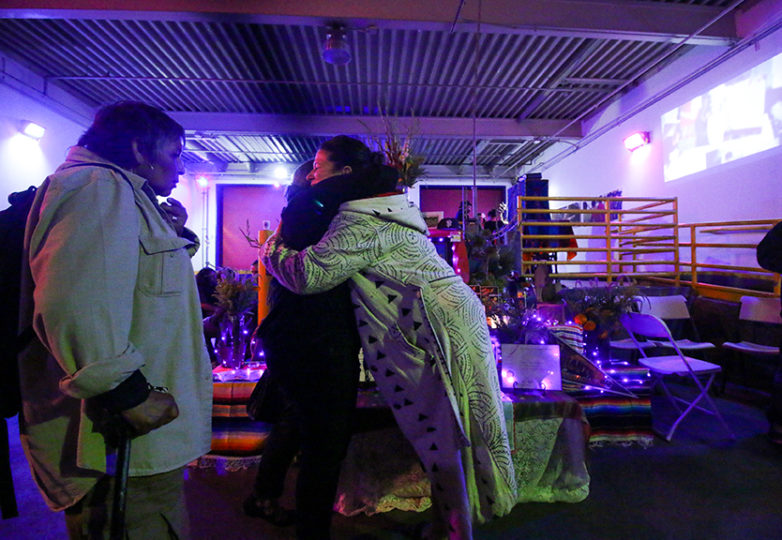 Family and community gather by an altar for Carlos Gutierrez during his memorial service on Friday, July 20 in the Mission District. Photo: Erica Marquez 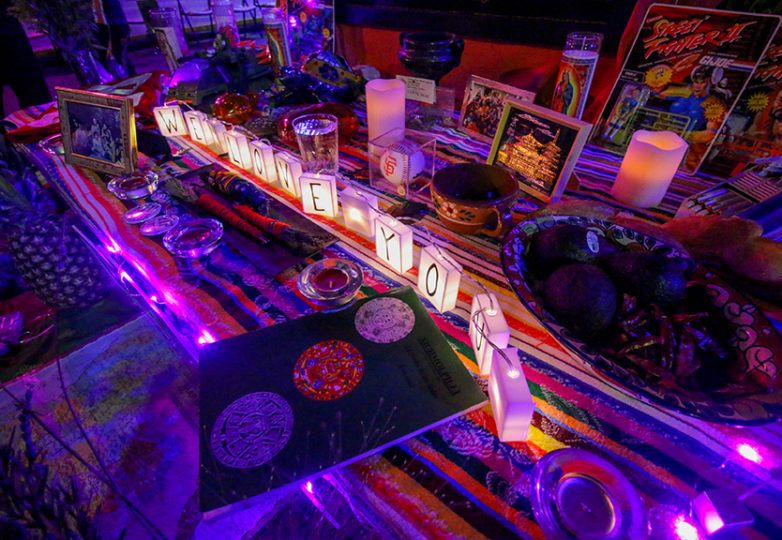 Family and friends gathered to celebrate the life of labor rights and housing activist Carlos Gutierrez on July 20. The Mission native, who had tirelessly dedicated himself to helping improve the lives of others in his community, died Sunday, July 15, in his Bernal Heights home at the age of 38.

The memorial began with a viewing and ceremony during the day, and ended with a public reception in the evening as a way for the community to praise and remember the life of the young man.

Gutierrez has been described as a “mentor to troubled youth,” having himself faced similar obstacles in his youth in the Mission district of the 1990s.

Gutierrez turned his life around after he became a father at a young age, and moved his family to the safer environment of Sonoma County.

His daughter Cassandra Gutierrez, 21, said that although she had a turbulent relationship with her father and often felt neglected, she always wanted to be with him. She said even when her father spent time with her and her brother, Elias, if was never enough.

“There’s a huge void in my heart, and nothing will ever be able to fill it,” Cassandra said.

She said her father’s troubled youth was only a small fraction of his life, and that although he came from that background it did not define his future. He used to tell his children that “I lived that life so you don’t have to.”

“His children were just his heart and soul, and his family,” said Huli Milanese, the landlord of Gutierrez’s Bernal Heights home. “Because he had been on street and done shit, then he became a leader for the youth and gave them hope.”

Milanese and Gutierrez had been good friends for years before becoming landlord and tenant.

“I miss the sense of the beautiful community he brought here,” she said. “My husband died, and to have people like [Gutierrez], live with us, gave my heart a lot of good feelings.”

Milanese said she found Gutierrez to be a beautiful human being, and that many others felt the same way (which became obvious by simply observing the amount of people who came during the life celebration ceremony).

The ceremony began in the parking-lot at the corner of 16th and Folsom streets with more than 100 participants, while dozens of dancers performed in the middle in remembrance of the love Gutierrez carried for his community.

The evening continued inside with food and drinks. Slideshows displayed the life of Gutierrez, and large papers on the walls bore instructions for community members to send “thoughts and prayers to Carlos as he journeys to be with his family and friends.” The middle of the room displayed an ofrenda, with several objects: candles, photographs, a 49ers jersey, and a map showing the area of southeast Asia.

Gutierrez’s partner, Dolly Sithounnolat, said she had brought him to visit Laos where her family is from, and Thailand. The trip took place only a few months into their relationship, a decision, she said, made simply because of their strong connection. Not only had they grown up in the same neighborhood, but they also had friends in common, shared the same hobbies and worked in similar fields.

Sithounnolat explained that they initially bonded over the issue of affordable housing. “We connected right away in what we wanted to see in the community.”

One of the ways Gutierrez was involved in the community was through Homies Organizing the Mission to Empower Youth (HOMEY), an organization he co-founded that is dedicated to helping young people. According to its website, HOMEY “works directly with youth and young adults in schools, on the street and in jails to deliver our brand of workshops, services and empowerment activities to our community.”

“That’s the thing that is so important, because when youth don’t have hope they don’t care what happens to them or anybody else,” Milanese said. “But when they have hope, they fight for themselves and for a better world for everybody. And Carlos was a tremendous leader on this. Just a tremendous leader.”

Gutierrez had a close relationship with his family, and lived together with various members growing up. The family resided in the same house in the Mission for nearly four decades, where his aunt Beatriz Leyva-Cutler had stayed with her nephew and his mother for a few years in the early 1980s.

Leyva-Cutler said Gutierrez’s life may have been different had he grown up in a less violent neighborhood. But it was thanks to those experiences, that he understood the hard life and could show troubled youth that there is hope.

“You can turn your life around and make it good for yourself and for others,” she said, which is what she would like people to take away from Gutierrez’s death. “There is hope. In every youth there is hope. And there is a community that can surround you, and there are people who want to mentor, want to support any young person who feels that there is no way out.”

Sithounnolat said Gutierrez was involved in several projects besides HOMEY, and that he was a connector among various fields and often went “above and beyond” in his work.

“He was dedicated to the Mission because of all the goddamn gentrification,” Milanese said. “Whenever there was a housing movement and housing rally, he was there all the time. Because that was his roots, that was his soul, the Mission.”

Cassandra said her father never wanted praise or recognition for his work. “I was spoiled to know him. No other person is like him, not even close.”

Gutierrez is survived by his children, Cassandra and Elias, his partner Dolly Sithounnolat and his mother Erendira Leyva-Haus.