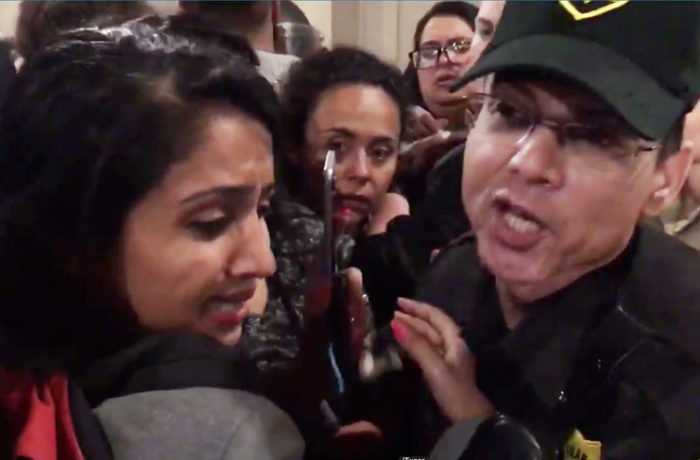 A screenshot of 48hills reporter Sana Saleem being pushed into the corner of a desk by a Sheriff’s deputy while covering a protest at City Hall on May 6. Video by Joe Rivano Barros. 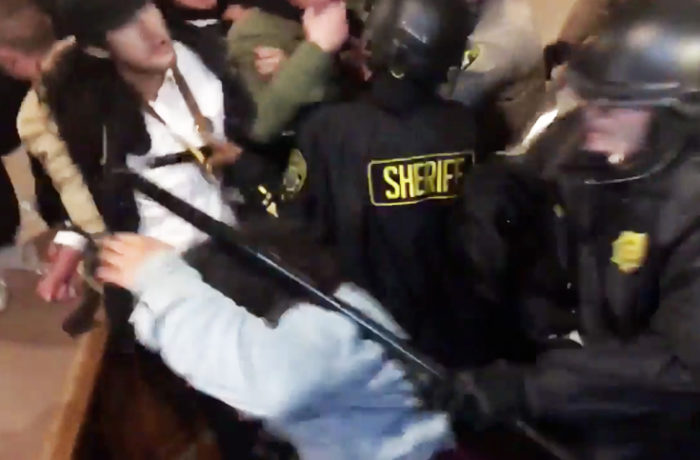 A screenshot of Guardsman photographer Natasha Dangond being struck by Sheriff’s Deputy Osha during a protest at City Hall on May 6. Video by Cece Carpio. 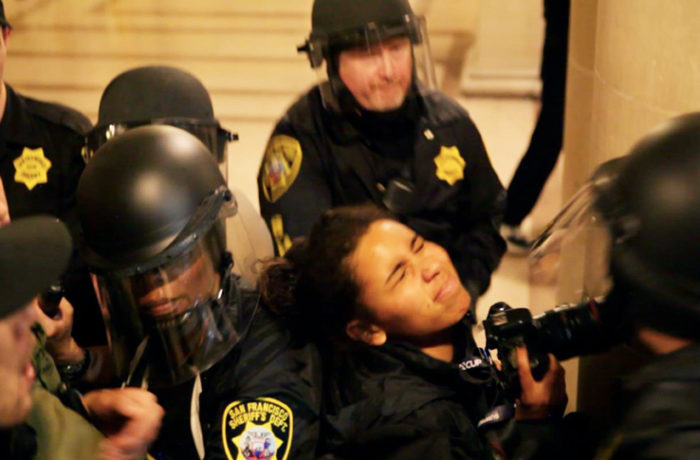 El Tecolote photographer Gabriella Angotti-Jones is grabbed by two Sheriff’s Deputies while covering a protest at City Hall on May 6. Photo Noé Serfaty

Four journalists—two who were on assignment for El Tecolote—filed official complaints against San Francisco’s Sheriff’s Department, after being roughed up by sheriff’s deputies while covering a protest at City Hall on May 6.

Juárez, Angotti-Jones, Dangond, and Saleem were four of the journalists who were covering a Friday evening demonstration at City Hall, where protesters were showing support for the ‘Frisco 5′ while calling for SFPD Chief Greg Suhr to be fired.

Juárez, who was able to capture a photo of Angotti-Jones being grabbed, began yelling that she was a member of the media. Angotti-Jones too began identifying herself as press, when a deputy told her to calm down. Once she confirmed her affiliation with El Tecolote, Angotti-Jones was pulled away from the deputy and pushed back into a group of protesters.

“I was not standing in the line [of protester],” said Angotti-Jones, who was not physically injured. “I was wearing a press pass. I had a camera; it was up to my face. I stepped forward to take a picture.”

About 20 minutes after Angotti-Jones’ incident, Juárez—who was visibly wearing two press credentials from El Tecolote and SF State’s journalism department—was photographing protesters when he was pushed without warning to the floor and down a short set of marble stairs by sheriff’s deputy.

“He told me to move as he was pushing me to the ground,” said Juárez, who reported that he felt discomfort in his right knee, right hip and upper left shoulder later that night. “I fell down a few stairs. My camera also hit the floor. And as soon as I got up, I started recording video on my iPhone to get the deputy’s badge number and name.”

The video shows a deputy 2085 Emergency Services Unit Davidson walking away once realizing he is being recorded. Mission Local reporter Joe Rivano Barros witnessed the incident, and his voice can be heard in the video helping Juárez identify the deputy.

“She had been pushed by the deputy into the desk with a baton,” Barros said. “She gave a high pitched scream.”

Video of Dangond’s incident surfaced on social media showing her screaming after being pushed and struck on the head with a baton by a deputy Osha, Badge No. 1893. After the demonstration, Dangond received medical attention. She sustained a welt on her head and bruises on her arms.

Saleem, who was on assignment with 48hills, suffered sore ribs after being pushed into a corner of a desk by a sheriff’s deputy with his baton out.

“I believe the actions taken against them were excessive,” wrote Barros in his own complaint to the Sheriff’s Department.

According to Juárez, Chief Deputy Sheriff Albert Waters II clarified that the journalists were allowed to photograph so long as they didn’t move beyond the top stair near the City Hall entrance. Waters also apologized after hearing about the incident involving the deputies.

Hours after the complaints by the four journalists were filed, Sheriff Vicki L. Hennessy released a statement, saying she had “opened an investigation into the allegations.”