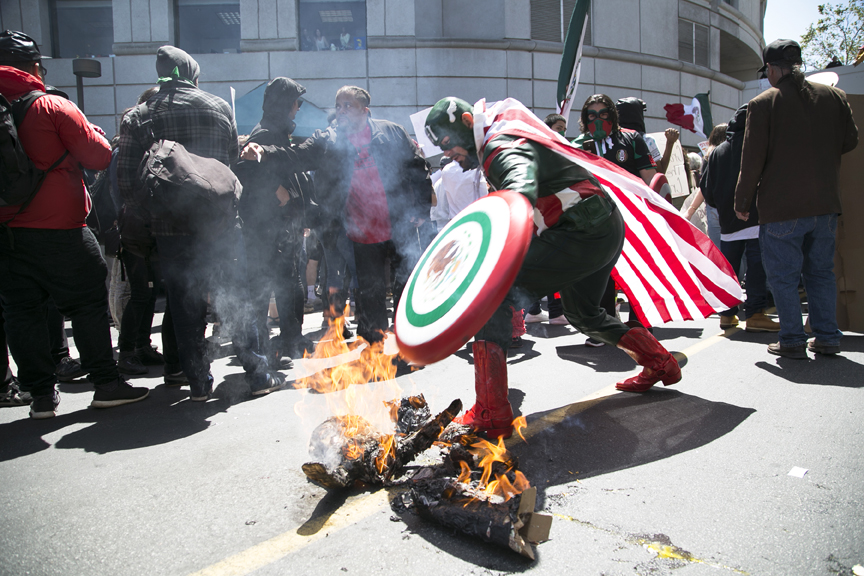 Hundreds of demonstrators assembled around the Hyatt Regency in Burlingame, CA on the afternoon of Friday, April 29, as the Republican presidential frontrunner Donald Trump spoke at the California GOP Convention.

Protesters linked arms on one side of the street blocking incoming traffic on Old Bayshore Highway, while a raucous crowd of several hundred people—some whose faces were covered with bandanas—waved Mexican flags on the other side of the street, chanting, “Shut down Trump.”

Trump’s numerous controversial comments throughout his presidential campaign, including those specifically targeting Mexicans, have enraged the Latino community, and have even led to violence breaking out at his rallies.

“His policies just aren’t right,” said Roberto Lopez, 21, who was dressed as a Mexican superhero with a mask.  “Just the way he talks about people, about Latinos and immigrants. He’s causing a lot of hate between the country. We’re at a time where we need to unite and he’s dividing us. It’s only going to get worse if he’s elected president.”

As the event was about to start, the vocal crowd made its way through some metal fencing that was intended to block off the main entrance of the hotel.

Tempers flared as protestors were met by a wall of police officers attempting to keep them from stampeding their way into the hotel and interrupting Trump’s keynote speech at the California Republican Party Convention lunch banquet.

Hundreds of people then ran around the building to gain access to the side entrance, but were blocked by law enforcement in straight-line formation, wearing bulletproof vests and holding batons.

Many of the protestors were shoved, tackled and even struck with batons as they disobeyed the officers.

The confrontations continued as a few protesters began to pelt law enforcement with eggs. During one instance, an officer at the end of the line swung his heavy black baton at a young Asian man, until the officer fell and had to be helped up by other police officers.

Despite their inability to enter the building and interrupt the event, demonstrators still left their mark.

According to SF Gate, Trump was forced to jump down from a freeway barrier and enter through the backdoor of the hotel, because the front and side entrances were congested with anti-Trump crowds.

“That was not the easiest entrance I ever made,” Trump reportedly said, as he addressed the convention. “It was like crossing the border.”

The anti-Trump crowd was colorful and diverse; most were Latinos, but there were many others—African-American, Arabic and white—who also joined in the loud Spanish chant of “Si se puede.”

“I think a lot of people are here to take a stand against racists,” said Leigh Stackpole, a retail and wholesale business consultant. “I think Trump is a narcissist and I think he would be bad for our country, and it’s really scary.”

A few young pro-Trump supporters were also outside of the Hyatt, holding up signs.

“I think it’s their right to protest, but I don’t like it when they start attacking people,” said Kevin Pine, a 15-year-old high school student.  “I think Trump is saying that we need to enforce the rules [on immigration]. It’s called ‘illegal immigration’ because it’s illegal.”

At around 2:30 p.m., police ordered the remaining crowd to disperse; five people were arrested in total.

Prior to his visit to Burlingame, Trump attended an event in Southern California at the Pacific Amphitheater at the Orange County Fair & Event Center.

Both rallies come at a moment in which Trump is preparing for the state’s June 7 primary, where he could secure the GOP presidential nomination.