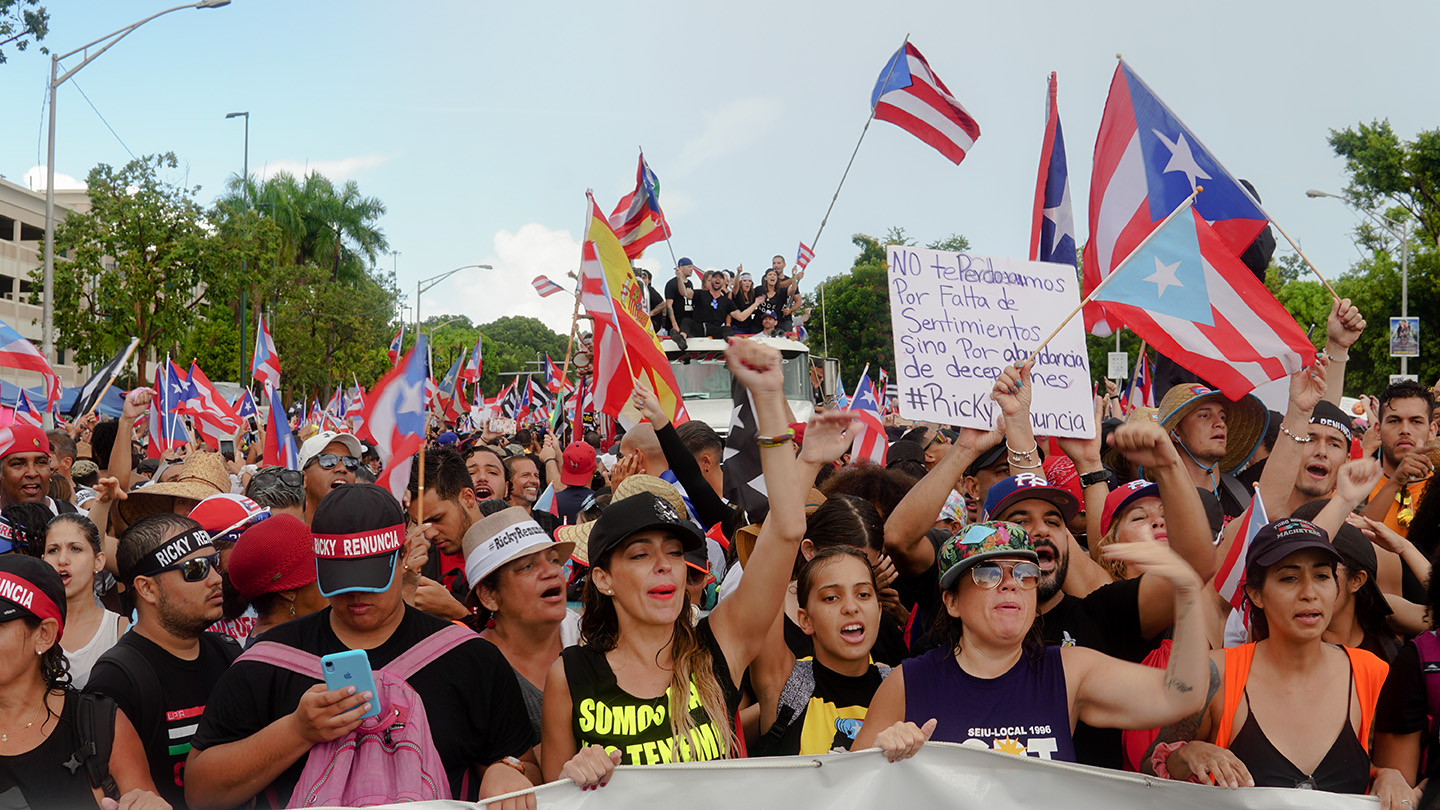 The country town of Yauco, and many like it, have been deserted on the Commonwealth territory. Schools and main street businesses have closed—including Ramos’s old elementary school—even before the hurricanes hit the island a few years ago. Ghost towns became relics for the people that left them to find better economic prospects on the American mainland.

“I hope that can change, that people feel like they can stay in Puerto Rico and come back to Puerto Rico and make a good living,” said the 44-year-old Ramos, who is a member of Bay Area Boricuas. “And that we don’t lose our island to speculators and investors.”

The last couple of years have shaken Puerto Ricans to a breaking point, and an eruption had been looming long before group Governor Ricardo Rossello’s chats were leaked.

Centuries of colonial rule has led to political injustices that have trickled down to years of corruption and a recession in 2005. The island accumulated a $72 billion debt and suffered a mass exodus of the people heading to the United States.

Then the Centro De Periodismo Investigativo of Puerto Rico published 889 pages of Rossello’s Telegram group chat on July 13, which included members from his cabinet. The chat boasted sexist, homophobic and disrespectful remarks about the Puerto Rican people. Boricuas from far and near, old and young, LGBTQ+ and straight cis, united and demonstrated outside of La Fortaleza, the governor’s mansion, to demand Rossello’s resignation.

“I think it’s the accumulation really of everything,” said Ramos, who grew up between Puerto Rico and San Diego. “I think that people are still suffering and I think that the wounds are still really raw and the realization that there was criminal behavior behind the way in which they were neglected.”

“Ricky Renuncia Y llebate la junta!” was chanted on the streets by over half a million people in San Juan for days. Colonial resistance runs deep in Puerto Rico. After two hurricanes and bankruptcy, Puerto Ricans were frustrated and disillusioned with the lack of effort made to reconstruct the island. The Obama administration appointed a non-elected Financial Oversight and Management Board for Puerto Rico in 2016. “La junta,” as it is locally known, is an austerity measure to stop overspending on the island. The board approves expenditures and budgeting on the island, which left little power to Rossello’s government.

Feelings of resentment toward “la junta” were also in the leaked chats, as well as hostility aimed at opposing law makers and confidential government information shared with unofficial members in the chat. However, it was the insults made about the dead of hurricane Maria that was the final nail in Rossello’s political coffin. “Rickyleaks,” as the chats are being called, came after the FBI arrested five of Rossello’s former cabinet members July 10 on fraud and corruption charges, according to the Associated Press.

Soon after the revelations, Puerto Ricans took to the streets. The force of rebellion extended to the mainland from New York to California. The diaspora in the Bay Area, including Ramos, came out in support of their people in Oakland July 22 in what is arguably, the largest protest in Puerto Rican political history.

“This has been a testament of the effort of Puerto Ricans throughout the diaspora,” said Kahlil Jacobs-Fantauzzi. “And it shows you our love for the island.”

The resistance included Bay Area locals Kahlil, 43 and Eli, 41, Jacobs-Fantauzzi, founders of Defend Puerto Rico (DPR), a multimedia project dedicated to showing the world Puerto Rico’s struggle, resistance and its beauty that ties all Puerto Ricans. Long before they started DPR, both brothers attended U.C. Berkeley as undergrads. While studying at Cal in 1994, Kahlil invited Ramos to start a Puerto Rican club. The club grew with most of its members remaining in the Bay Area. Now Kahlil, a teacher and film producer, along with Eli, a documentary filmmaker, are in Puerto Rico for DPR, but are also there in solidarity.

“Unprecedented is the amount of people on the street on the call for resignation from the governor,” Eli said. “This is not new. People have been fighting against the government and colonialism on the island for a very long time.”

After ignoring calls for his resignation as governor, Rossello finally succumbed under public pressure and announced his resignation July 24. His last day in office is Aug. 2 and Puerto Rico will receive Justice Secretary Wanda Vazquez as its new governor. Originally the job would go to Luis Rivera Marin, former secretary of state, but he resigned after being linked to the leaked chats. For the first time in its history, Puerto Rico ousted a sitting governor. The collective power of the people is a cautionary tale for corrupt governments erected from the stains of colonialism.

“We felt like it was our responsibility to let other people learn about Puerto Rico,” Kahlil said. “But also to keep the ties to the island strong.”