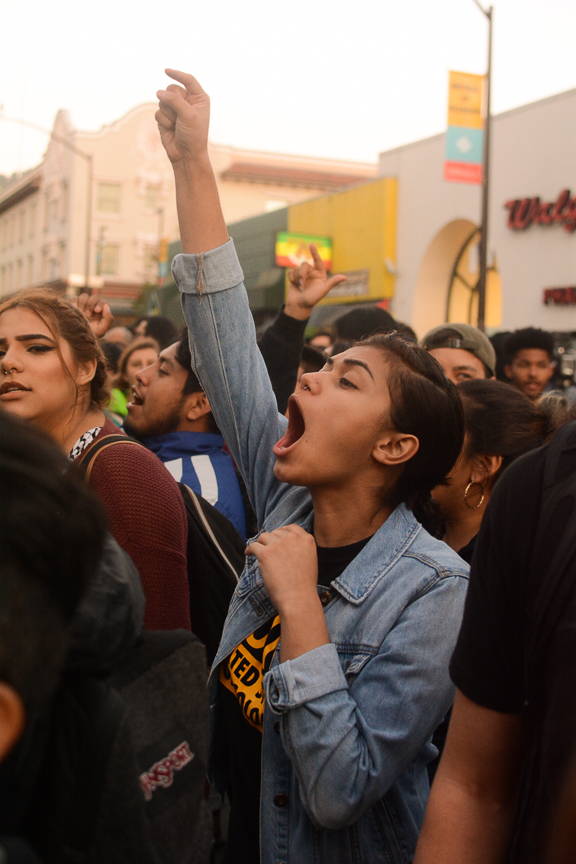 Shapiro, formerly of Breitbart.com, is editor-in-chief of the conservative news outlet The Daily Wire. He was invited to Berkeley by the right-wing student group Young America Foundation, but his appearance drew hundreds of protesters, who demonstrated in the streets in front of a locked-down campus.

Police patrolled U.C. Berkeley and lined the area along a trench-plate wall, stretching from Haus Pavilion through Sproul Plaza, which is known for its role in the Free Speech Movement. The speech was held in Zellerbach Hall, a large concert hall inside Sproul Plaza.

The protest initially started with students holding a sit-in inside of the Martin Luther King Jr. Student Center, taking over the building through the night. Refuse Fascism, an organization that helped plan and launch the protest, handed out flyers and had a makeshift podium for demonstrators to speak.

“No justice, no peace, no racist police,” shouted hundreds of mostly students protesters as they were locked out of campus.

Officers from neighboring counties throughout the Bay Area, as well as private security forces, kept Sproul Plaza sealed off to counter demonstrators, who accused the police of protecting hate speech and for promoting fascism.

Berkeley City Council had authorized police to use pepper spray on violent protesters the day before, referencing the previous violent clashes at U.C. Berkeley and at Civic Center Park throughout the year involving far left-wing antifa and White supremacist groups. However, antifa—the black-clad anti-fascist anarchists—did not attend the protest.

Following Shapiro’s speech, a handful of right-wingers spilled out into the crowd. Kyle Chapman, affectionately known in far-right circles as “based stickman” and creator of the Fraternal Order of Alt-Knights—a far right-wing group—was recently charged with a felony after allegedly assaulting people with a leaded stick at a March 4 Berkeley rally. Chapman’s presence at the Shapiro event stirred commotion in the crowd, causing his supporters to huddle around him as counter protesters.

A few scuffles broke out, leading to quick police arrests but few injuries.

On Feb. 1, a scheduled speech by Yiannopoulos, often referred to as a provocateur, was canceled following a 2,000-person protest in which some 150 antifa demonstrators smashed windows of the student union and set fire to a high-powered light.

May 1st: A Day Without Immigrants!