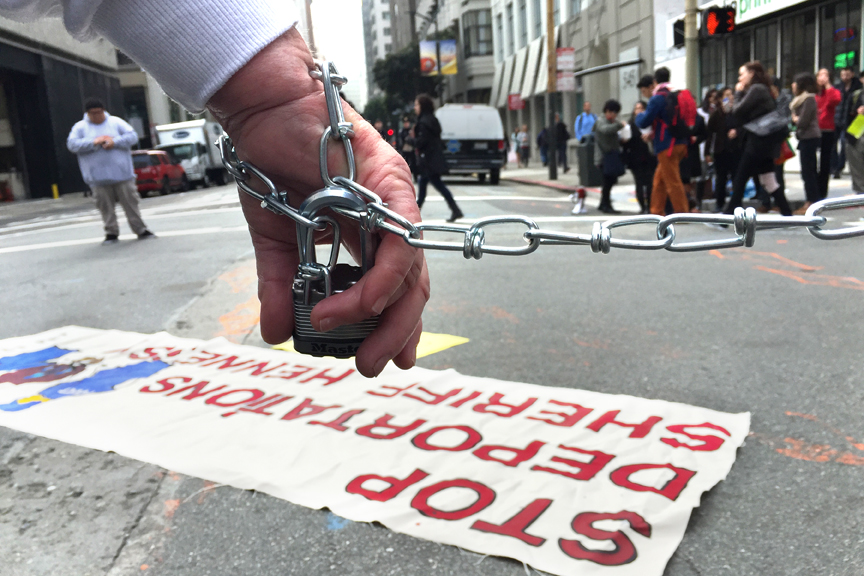 In protest of the continuing immigration raids throughout undocumented communities, a group of demonstrators chained themselves together Jan. 26 and blocked traffic at two intersections in front of the Immigration and Customs Enforcement (ICE) headquarters in San Francisco.

With nearly 200 people present, police arrested 16 protesters who were blocking the intersections at Sansome and Jackson streets and Sansome and Washington streets.

“As someone who is undocumented and queer, to be here physically blocking the road is to show people what it feels like to be in this situation, to be stuck,” Julio Salgado, one of the San Francisco participants said, referring to the traffic congestion.

The protest began at Sydney G. Walton Square; within 20 minutes, protesters marched toward the ICE building. By noon, the police declared the assembly unlawful and warned that anyone who continued to block traffic would be arrested.

Salgado laid at the intersection of Sansome and Jackson streets chained to five other people as other supporters surrounded them, chanting “ICE out of California!”

Today in San Francisco and Los Angeles, the general message is that refugees fleeing violence in Central America are welcome, and that deportations should be halted, said Luis Serrano of California Immigration Youth Justice Alliance.

“The United States needs to take accountability,” Salgado said, referring to the role of U.S. foreign policy in exacerbating the immigration situation. “No one wakes up one morning and says, ‘You know what? I’m going to go to a different country where I don’t speak the language and don’t have papers.’”

This action came just days after 22 U.S. Senators sent a letter to President Obama calling for a halt to mass deportations of Central American refugees. Among the Senators behind the letter were Dick Durbin (D-IL) and Patrick Leahy (D-VT), both were primary concerned about mothers and children.

The letter criticized the Obama administration and its partnership with the Corrections Corporation of America on building a mass detention facility, specifically for mothers and children, which they said costs a daily average of $343 per detainee.

“We are deeply concerned that in its eagerness to deter additional arrivals from this region, the department is returning vulnerable individuals with valid protection claims to life-threatening violence,” the senators wrote. “This is not hyperbole. There have been multiple reports of individuals, including children, being killed within days or weeks of their deportation. Moreover, we do not accept the argument that removing these individuals will deter additional children and families from fleeing the region.”

They also noted that targeting families for deportation instead of convicted felons went against national security efforts.

Between the years 2008-2014, there was an increase of 1,185 percent in asylum applications coming from El Salvador, Honduras and Guatemala, according to the United Nations High Commissioner for Refugees (UNHCR).

Additional statistics illustrating high levels of violence for women and children in particular in this region include the murder of 27 children per 100,000 people in El Salvador, according to a 2014 UNICEF report.

“Surprisingly, I am not afraid,” said Christopher Lopez, who was blocking another intersection at Sansome and Washington streets. “I have these resilient soldiers alongside me,” he said pointing with his head to the protesters beside him. He had both arms chained to two other people.

A 22-year-old college student at U.C. Berkeley, Lopez said he would not move until he was arrested.

“I feel privileged of having citizenship,” Lopez said. “Here are people who are risking more.”

Lopez and the others he was chained to at Sansome and Washington streets were arrested, but released later that evening.

“I think they got our message,” said Sandy Valenciano, of the California Youth Justice Alliance.