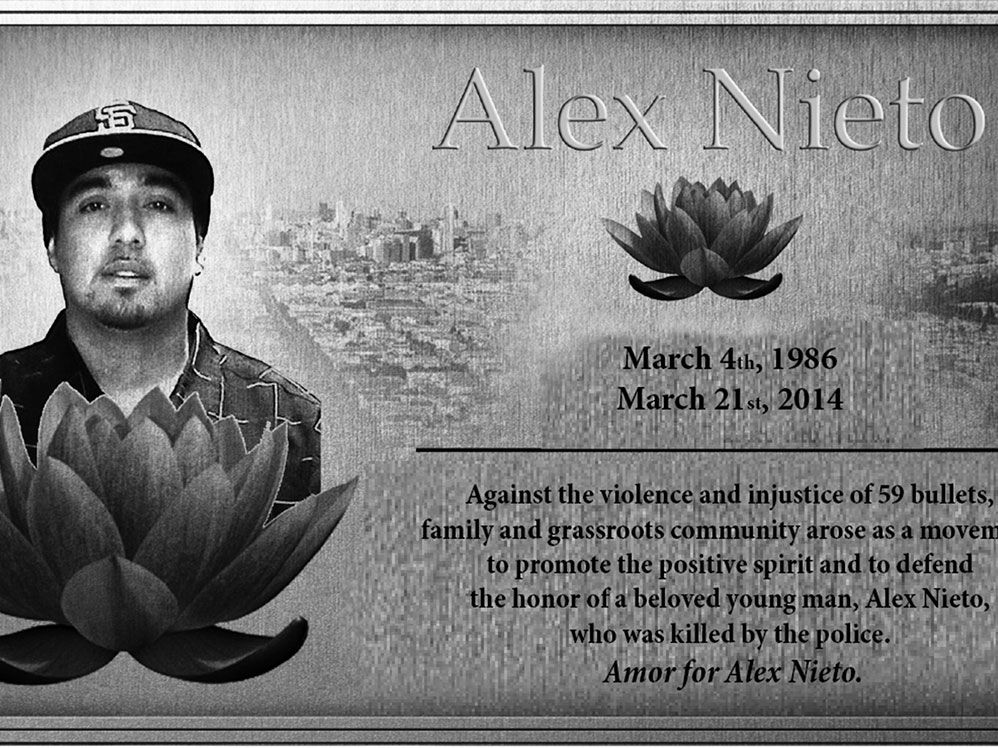 Just over five years to the day of Alex Nieto’s murder at the hands of the SFPD, his family can close a chapter on the tragic events surrounding Alex’s death and its aftermath. At the April 18 San Francisco Recreation and Parks Commission meeting, the city gave its final approval for a new permanent monument to be installed in Bernal Heights Park at the site of Alex’s final moments of life. His parents, Refugio and Elvira Nieto, both stood in front of the committee, thanking them, and his father revealed, “I still go to the park every day to pray and reflect and there’s usually a small dog who visits me.” The monument will be one of the few in the country to commemorate a victim of police violence, and one of the first to do so for a Latino man.

The committee, in respect to the Nieto family’s wishes, did not ask for a single thing about the monument to be altered and gave its full support and backing. The monument itself was the brainchild of what became a community-based committee led by Alex’s parents, and is being fiscally sponsored by Acción Latina, a community nonprofit and publisher of El Tecolote. Special praise must also be reserved for the office of Hillary Ronan, who, as Acción Latina’s executive director Josué Rojas said, “[She] pulled out all the stops. Her and her office were huge advocates for the project.”

The piece is to commemorate the life of a young man taken by those who were sworn to uphold and protect peace. It’s very difficult not to become angry over the salient facts of the case. A neighbor of Alex’s saw Alex in the park and felt threatened. He called the police and within minutes four officers stormed up the hill, into the park. Seconds later they fired a combined fifty-nine bullets into Alex, a young man who, as so many others, was merely living his life in peace. This was not even a ‘wrong place at the wrong time’, an expression often used to dismiss and trivialize the killing of people of color. He was killed for enjoying a sunset on a hillside park, for wearing a red 49ers jacket in the middle of San Francisco, for being a young neighborhood man in his neighborhood park, enjoying a burrito, wiling away the last few minutes before his work shift started.

Those same four officers then conspired to twist the narrative into something that fit their brutality and recklessness, a story that directly contradicts another man who witnessed the entire event unfold. One of those officers as recently as 2018 received a Gold Medal of Valor, the highest such award given, for an unrelated police killing. All four officers were acquitted and it was up to the Nieto family and the Mission community to pick up the pieces, an effort which eventually became the catalyst for the monument which will be unveiled by next fall.

Benjamin Bac Sierra, longtime family friend of the Nietos and advocate for Alex Nieto told El Tecolote, in the wake of the hearing, “Even going to trial was a success. Most people don’t get even that opportunity.” He envisions the monument as a place for students to visit to learn and engage with the community’s struggles. “The memorial,” he says, “can be a focus for education. The trial can be used as study material.”

The monument will feature four panels of original works by local artists, and the top a laser-cut plaque of a now iconic photo of Alex superimposed in front of the view of San Francisco as seen from Bernal Hill. In the corner is a hawk, a kinship spirit, and a reference to a hawk that, according to Refugio Nieto, was witness to that night’s events and lives on the hill still. There will be lotus flowers as well, referencing Alex’s path into Buddhism and non-violence.

Finally, there will be a poem explaining exactly the monument’s purpose, written by Benjamin Bac Sierra:

“Against the violence and injustice of 59 bullets, family and grassroots community arose as a movement to promote the positive spirit and to defend the honor of a beloved young man, Alex Nieto, who was killed by the police. Amor for Alex Nieto.”

Thanks to the determination and courage of his parents, Alex’s memory will have a permanent home atop Bernal Hill. While Alex is no longer among the living, his spirit remains and endures and this monument will continue to do so for generations to come. He will forever serve as a marker for peace wrought from violence and community coming together from the broken pieces of tragedy and police oppression.