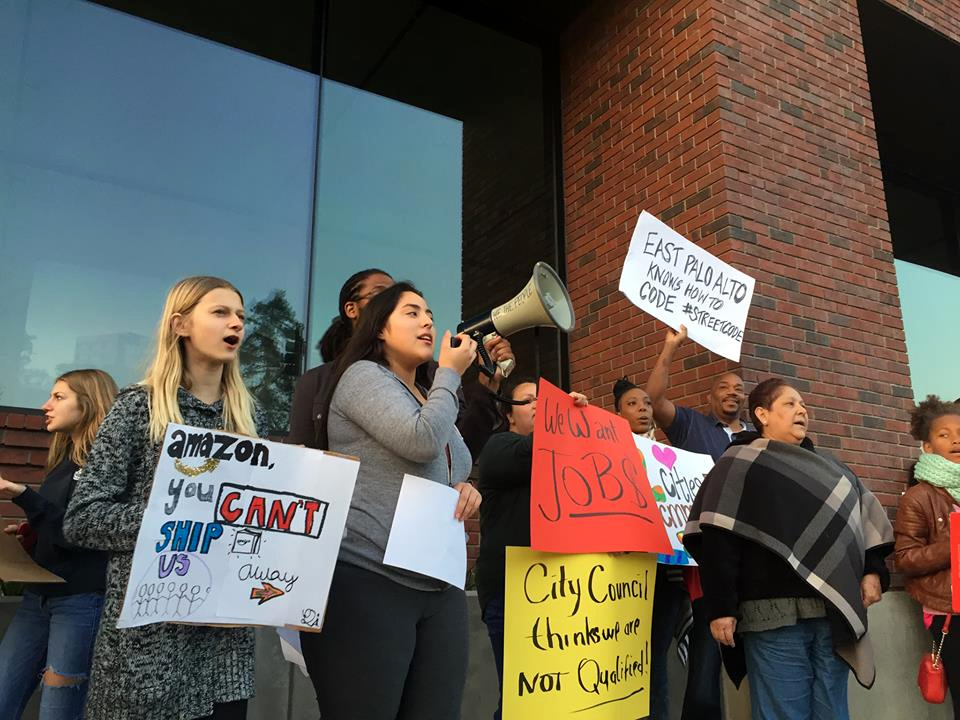 The youth activists of color at the East Palo Alto-based Youth United for Community Action (YUCA) have made it their life’s work to influence change from within their own homes by fighting against social and environmental injustices.

I learned of YUCA earlier this year when researching grassroots community organizations local to the South Bay. I reached out and was invited for a visit by Program Director Cynthia Cruz.

YUCA’s office is immediately recognizable by a huge sign proudly displaying raised fists of color with statements like, #BlackPower #LoveWins and #SaveEPA. The residential home is nestled between other single-family homes of long-time East Palo Alto residents.

My first sit in with YUCA confirmed everything I thought I would love about it. That day, Cruz  conducted a “political education” for youth, which touched on capitalism, environmental justice, privatization of resources on Indigenous land, and what it means to East Palo Alto regarding the current water crisis it is facing.

East Palo Alto has a rich history of activism as a disenfranchised side of the Bay Area, having to fight to be incorporated and even now, not receiving the full attention as a city.

YUCA is a safe educational space provided by and dedicated to the youth. This small pocket of East Palo Alto traces its beginnings to 1994 when low-income students of color from Stanford University, who shared a revolutionary spirit, were moved to reach out to the community and create a summer internship program. The internship garnered much needed attention and movement. YUCA now independently stands as a year-round community organization for youth between the ages of 13 and 18.

A lot of YUCA’s work is focused on housing rights and accessibility. In past years East Palo Alto residents have either been displaced by tech giants themselves (the Amazon offices share the same block as the YUCA office) or the aftershock of their waves, which have come in the form of steep rent increases affecting hundreds of families. YUCA has managed to secure a list of measures that protect long-time residents and continues to push for affordable housing and rent control, but one of its greatest victories is the shutdown of the hazardous waste management facility Romic.

For years, Romic worked right out of East Palo Alto’s backyard, contaminating the groundwater, which has caused a city-wide asthmatic epidemic and greatly increased residents’ risk of developing cancer. After multiple employees were exposed to the hazardous material which lead to serious health complications, YUCA, alongside other city residents, demanded that the facility be shutdown. After an 11-year campaign against Romic, success finally came in 2006. It’s because of the youth activists at YUCA and their allies that East Palo Alto has been able to confront these health issues that face the entire city.

YUCA’s core members work closely with Cruz and Executive Director Tameeka Bennett. They decide what approach to take on every campaign, what questions to ask, who they should contact, every aspect of any community organizing is a part of their responsibility, and this is extended to educating their community.

A few months ago I attended a housing forum produced by core members of YUCA, which focused on the displacement of youth in East Palo Alto and other communities that have been affected, and featured mainly the voices of the youth themselves. Participants admitted that they are clinging to the remnants of their culture after a severe whitewash of their community, which has left many feeling hopeless.

But the work pushes core members to continue. Valeria Ojeda, 16, said the organization has fostered her growth into a compassionate leader and she looks forward to moving up in YUCA and fitting into bigger roles. Karely Nunez, 15, was once a shy homeschool student, who has now found her voice among her peers. She performed a powerful self-written poem on displacement in front of the audience at the housing panel. Ine Grewe, 14, is a proud member of her community who has been given the tools to become a more confident public speaker and networker as apart of her campaigning efforts.

Sitting in the audience and witnessing the youth direct this entire panel was a testament to the power of East Palo Alto.

My role as a Higher Learning Assistant is limited. Everyday that I walk into YUCA, I learn more from them than they probably realize, and I think that’s what’s so important about having a youth-led organization, the tenacity that comes with being a youth and how necessary that is to move people. It’s what’s kept East Palo Alto alive and what will continue for them to thrive.

Jasmine Diarte is a student at San Francisco State University. She began interning at YUCA as a higher learning assistant in March 2018.