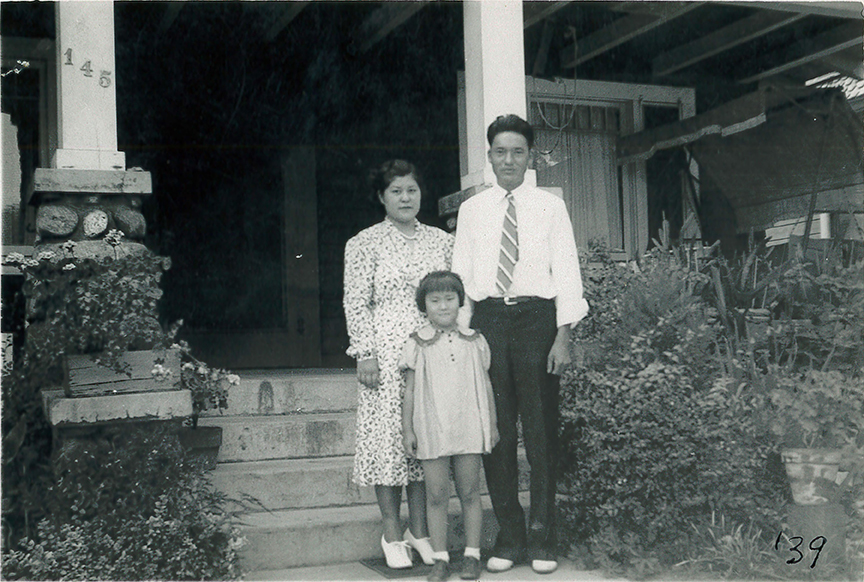 “Inasmuch as Mr. Ozawa is of a race ineligible to citizenship, there would appear no way under present law, whereby he can secure permanent residence in the United States. It is necessary therefore…that he depart from the country upon the termination of his student status.” —Edward J. Saughnessy. Acting Commissioner of Immigration, 1937

The above statement was written in response to my grandfather, Hayato Ozawa’s request for permanent residency within the United States. Hayato came to America at the age of 18 in 1928 on a student visa. He enrolled in college in Pasadena and continued his studies part time for the next nine years while he worked as a gardener to support himself. He married my grandmother, Shigeko Elizabeth Ozawa, in 1934 and they had a daughter in the next year.

By 1937, Hayato found himself in a precarious situation: graduating college. What should have been a joyous occasion became one of uncertainty due to his immigration status. Graduating would end his student status, requiring him to return to Japan. Continuing school would be impractical and expensive, especially while supporting a family on a gardener’s wages. Shigeko, born and raised in California, had no desire to move herself or her infant child to a foreign and unfamiliar country.  And with tensions rising between the United States and Japan, Hayato was reluctant to return to the country of his birth.

He began what became a 10-year quest for permanent residency. At the time, immigration from Asia had been effectively banned as was any naturalization, with citizenship restricted to three classes of persons: those born in the United States, White Caucasians, and persons of African descent. Between the 1880s and the 1940s, Asian immigrants were specifically targeted with discriminatory legislation, the government declaring them to be aliens “ineligible for citizenship.” This label prevented migrants from owning property, leasing certain types of land or receiving many of the protections of citizenship.

As part of his quest to gain lawful residency in the United States, Hayato and Shigeko exchanged more than 70 letters with members of Congress and immigration officials and received more than a dozen letters of support from employers and supervisors. Hayato attempted to enlist in the U.S. Army during the height of WWII, even when he and his family were imprisoned in incarceration camps in the Arizona desert. His requests for enlistment were denied on account of his lack of citizenship, but he served in the Army Map Service, translating Japanese maps for the War Department. Despite these efforts, in 1946 he received a letter from the Immigration and Naturalization Service denying his application for a visa extension and asking him to, “take immediate steps to effect your departure from the United States.”

In 1947, on their sixth attempt, a private bill successfully passed through Congress, granting Hayato permanent residency status in the United States. After living 19 years in the United States and struggling to evade deportation for 10, he was finally given relief. Six years later, after the McCarran–Walter Act (1952) was passed and racial bans on immigration were lifted, he was able to naturalize as a U.S. citizen.

The story of my grandfather is remarkable only in its success. There are far more people who struggled to obtain legal residency in the United States for the same length of time or longer and were denied. Many were, and still are, deported to their countries of birth, tearing their families apart. Others, worn down from years of struggle, are driven underground, living undocumented and under constant threat of removal. These stresses can strain the psyche, intensifying depression and mental traumas.

In 2012, President Obama created the Deferred Action for Childhood Arrivals (DACA) initiative to provide relief for those brought to this country as children, so that they might study, work and live without fear of deportation. In 2017 President Trump rescinded this policy, plunging DACA’s nearly 800,000 recipients and their families into precarious positions. As the grandchild of an immigrant, and the beneficiary of his eventual success to gain lawful status, I cannot help but see the parallels between my grandfather’s struggle and the plight of those facing deportation today.

By accident of fate, I was born in the United States and am granted the protections of American citizenship. As Americans, we stand on the shoulders of our family’s good fortune to persevere and remain in this country. We must therefore stand with not only Dreamers but all those who contribute to this country and toil beneath the yoke of “undocumented” status. To do any less would betray the legacy of those who came before and fought the tides of discrimination.