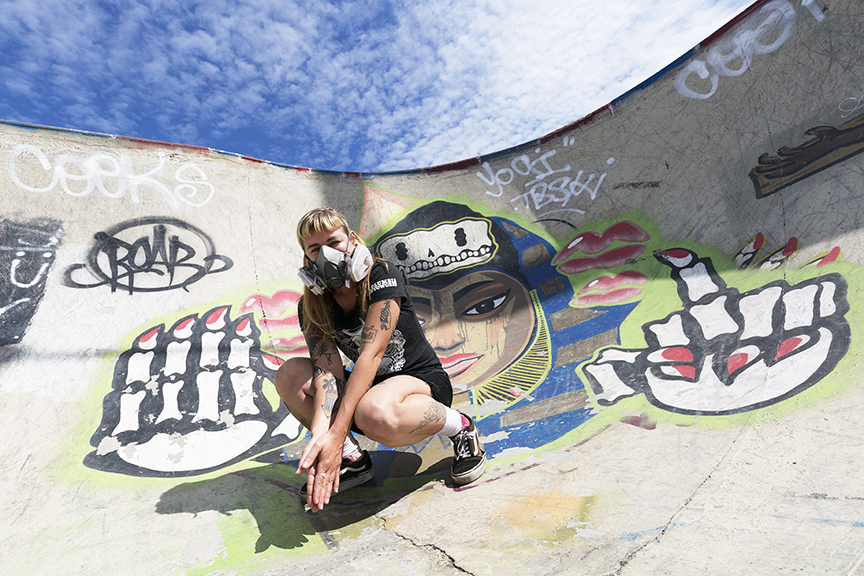 Girls with spray cans are painting the streets of Oakland and others across the nation, thanks to an artist and teacher known as Girl Mobb whose Graffiti Camp For Girls is helping to enhance the female presence in the male-dominated world of street-art.

Her camp is not your typical summer camp. It is an in-depth hands-on experience where students learn everything from how to use a respirator mask and wield a spray-paint can to what “caps” are and how to map out and paint a mural in a public space in front of bystanders.

“I have taught over 100 girls how to spray paint. We have done it all over the Bay Area, Ohio, Kentucky, and even in Phnom Penh, Cambodia, [and the camp will] keep going from there,” said Girl Mobb, who requested that her true identity not be revealed. “It has been a wild ride.”

At the five-day camp, girls ages 12 to 18 attend three hours of “classes” each day for  a sliding scale cost or for free. During the course of the week the girls learn different techniques for how to paint characters, letters and mural design, and by the fifth day of camp they will have finished a mural.

“You get the full mural experience, that is what it is all about,” said Girl Mobb.

Deirdre O’Shea of the Mission-based arts organization Southern Exposure helped Girl Mobb write the grant that lead to the first Graffiti Camp For Girls in April 2017.

“We pitched this idea to Southern Exposure and they accepted our grant proposal. It was amazing,” O’Shea Said.

Girl Mobb said she sees a shift in the world of street art, and that she hopes her camp will help to continue to “break down … walls.”

“It is still a male-dominated scene but because of the internet, we can access other female painters, painting loud, aggressive imagery that isn’t necessarily the typical soft feminine imagery.”

Girl Mobb has completed 17 camps and counting across the San Francisco Bay Area and in various cities including her hometown of Cincinnati, Ohio.

“How I became a graffiti artist starting in Cincinnati, I think it stems from in high school. I was moved to a rural part of town where we had ‘Drive Your Tractor to School Day.’ I just suffered, I was dying of boredom and meaninglessness,” said Girl Mobb.

Growing up, California was the place she wanted to be. She was inspired by the exploding art scene in the Bay Area at the time. Local street artists Barry McGee and Margaret Kilgallen’s show “Beautiful Losers” was highly influential for Girl Mobb at 16.

“I had waited my whole life to see imagery like that. I was really moved by it, that was a major inspiration for me,” she said of the show. “I feel that art show never left me.”

Putting her midwest days behind her, Girl Mobb eventually moved to the Bay Area and received her BA from the Academy of Art University.

The mystery behind Girl Mobb’s name is heightened by the under-representation of women in the world of street art. Before she was Girl Mobb, she was in all-male graffiti crews where she felt isolated. She eventually left the male crews and started to paint with other young women, which led to her name.

“It felt more like family and more natural,” she said. “I made it a big part of my life to keep that community … of female painters [together].”

Girl Mobb’s images break the mold of what it means to be feminine.

“All the imagery it is giving a different face to femininity. It can be aggressive, loud, dirty and grimy. That’s the side I want to show, because that is the type of girl I am.”

O’Shea feels these graffiti camps for girls are really helping fill a female void in art.

“How moving it would be if there were more young women who felt empowered and had the skills and resources necessary to make public art and have their art be in the world,” she said.

Girl Mobb is currently traveling and spreading her knowledge of the art of the spray-paint can to teach the next generation of young women how to make their mark.

“I am going to keep doing these classes,” she said. “It feels really important right now to be a part of the conversation, move forward with female empowerment. It seems like I was meant to do this.”