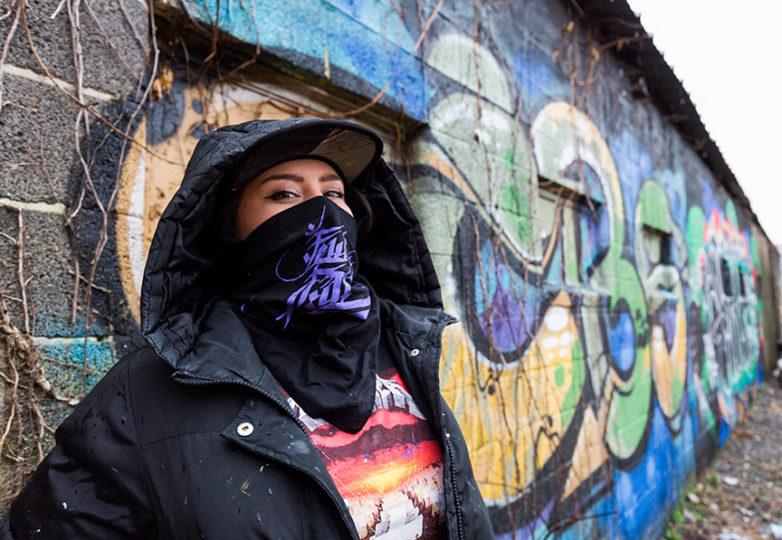 Meme, graffiti artist and founder of the all female graffiti crew Few and Far, poses for a portrait in Richmond, Virginia, on Jan. 4, 2019. Photo by Amanda Peterson 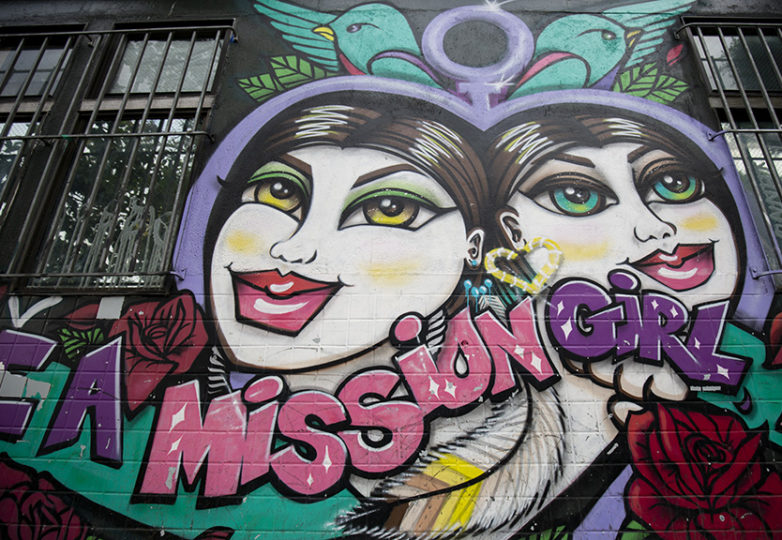 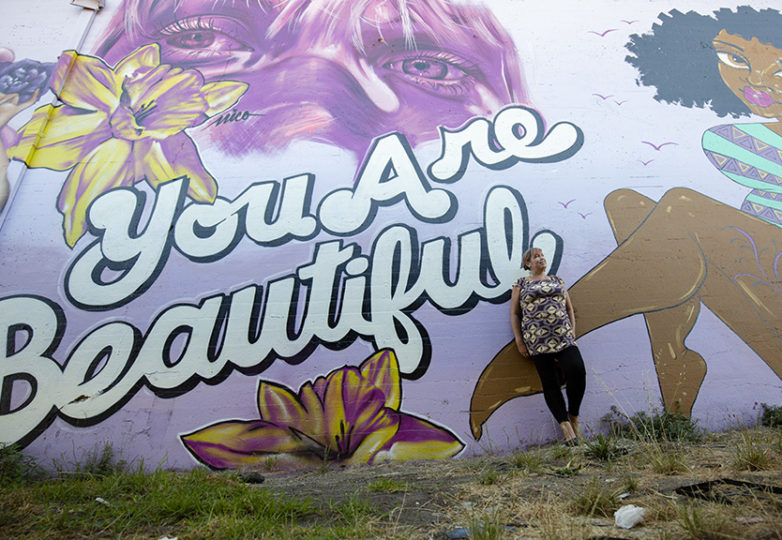 Artist Ursula X. Young poses for a photo in front of a mural she and her Few and Far crew created at 24th and Willow Street in Oakland, Sept. 30, 2018. Photo: Amanda Peterson 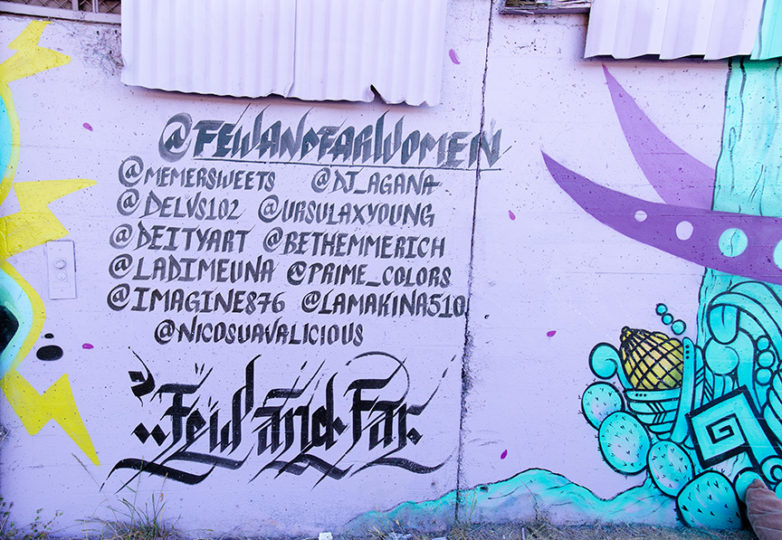 A mural created by the Few and Far crew at 24th and Willow Street in Oakland, Sept. 30, 2018. Photo: Amanda Peterson

Graffiti—a long-vilified form of art and medium for political commentary—has been historically dominated by male power, but a crew of artists based in the East Bay is working hard to change that.

Few and Far, the West Coast’s first all-woman graffiti crew, has fostered a bond of sisterhood that spreads far beyond the coast, across multiple continents.

“Few and Far crew is a group of women who get together to paint and create public art around the world, with a shared commitment to promote female empowerment, social justice and the strength of women,” said Ursula Young, a 44-year-old member of the crew originally from England, but now living in Grass Valley.

Young joined the crew after helping paint a mural in Sacramento as a Few and Far guest artist.

“There weren’t any known female crews on the West Coast,” said Meme, a founding member of Few and Far. “The East Coast, New Zealand, Australia, and the U.K. were the only places with female crews.”

Raised in a small town in Northern California, Meme grew up in a poverty stricken and abusive home. Art saved her. She started doing graffiti by herself in her late teens after she saw a painted train that looked, as she said, like “an alien had just dropped down into the train yard and created this thing, my mind was blown—wow, was that spray-paint?”

Heralded as one of the elements of hip-hop, graffiti art or “tagging,” when done without permission, is considered vandalism.

“It has been one of the hardest things [graffiti] in my life, continuing doing it, because I do illegal work,” said Meme. “Not only am I physically climbing fences, running across freeways and jumping, I am like a street acrobat, climbing up sides of buildings, billboards, doing things like that in my mid-thirties, not some young-buck.”

One night in 2011 Meme got a wall in West Oakland and invited a bunch of “badass women” to paint. One of the women, an artist named Mila from Australia, wrote “Few and Far” on the wall, and the rest is history. The original and largest female crew on the West Coast had made its first mark.

“It resonated so well with the community,” said Meme. “We were doing something more unique that had not been done yet.”

Dime is a 31-year-old Xicana and fourth-generation artist from Oakland, who was one of the first members of Few and Far. She has been painting murals and doing graffiti since she was nine.

Currently based in East Oakland, she is a mother of two boys and a cultural worker at East Side Alliance as well as an artist. She is a self-described art-tivist and grafitera, who says she enjoyed seeing “local neighborhood tags” growing up, but not the violence associated with them.

“With painting Graffiti, I learned hip-hop was revolutionary,” she said. “Graffiti is the only element of hip-hop that has been criminalized and that has made [graffiti] art so hard to be accepted.”

Coming up, Dime also found herself the only girl painting with all guys, yearning for a connection with other female artists. She remembers the night she first met with the other women that would soon be known as Few and Far crew.

“These were girls that I wanted to build up a sisterhood with because of the lack of sisterhood that I had within the graffiti movement. I wanted to build that with younger girls,” said Dime. “Now being in a crew with all women it feels more comfortable to be able to paint and to help each other out because you feel that you don’t have to owe anybody anything.”

The women of Few and Far, rather than competing, work together to show the world that women are stronger when unified under a common goal, to help others and create art that sparks change and social justice.

“In the community, things that happen to people of color, injustices all around the world, art has been a way of how people can speak up,” said Dime. “Graffiti has been a huge part of that in my life, it has been a way I have been able to find the voice and to paint the voice of many people that can’t speak up.”

All of the women in Few and Far are role models who work hard to beautify their hoods and make positive change within their own communities and beyond.

Agana—a 35-year-old graffiti artist, DJ and mother who lives in Richmond—is also one of the crew’s original members. She began tagging at the age of nine. She’s gone from being “hood-famous” to live painting for TED Talks, and she now spreads her knowledge to empower youth, teaching the art of graffiti to kids in her community.

She explained that graffiti is in natural opposition to capitalism. “The art form is claiming public space and saying to the world that we have our own culture and we don’t need to be force-fed consumerism constantly,” she said. “There is more to life than that.”

Agana has witnessed Few and Far earn respect from their male counterparts.

“I can’t speak for everybody but I know most of us want to be recognized for our skills not just that we are women doing it,” said Agana. “It is definitely humbling for people and dudes to come see women be hella organized and bosses, get on some big-ass scissor lifts, carry the scissor lift and do the damn thing—bust out a whole wall like a beast. It is good for people to see that and come together.”

When asked how Few and Far has impacted the graffiti game, Agana offered some words for thought:

“We don’t have to live in these gender binary sections of oppression and we can do whatever the fuck we really want, whatever makes us happy. It is especially important for females to have an artistic voice in whatever medium because nobody can talk about the issues like we can and a lot of people aren’t talking about issues that affect women and feminize all that is going on. If anyone is going to bring them up, [issues] it is going to us women.”