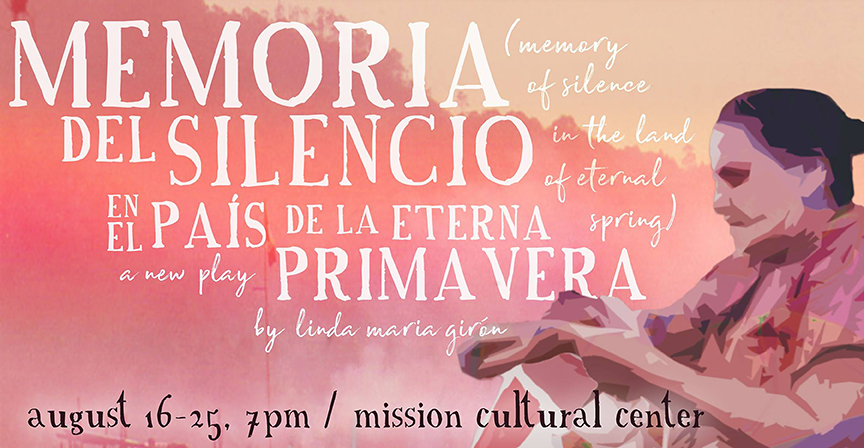 Come watch a story that details the mysteries surrounding the Familia Noguera in a small pueblo of Guatemala. Written and directed by Linda Maria Giron, our resident theater artist, “Memoria Del Silencio” follows the story of Irma (Adela Fornés), a survivor from the long and violent civil wars that wreaked havoc on Guatemala in her youth and destroyed much of her village. The story brings forward a history of Guatemala that has been actively suppressed by governments in an attempt to erase the atrocities of the past.

The long civil war, aided by a U.S. government, led to the disappearance of over 250,000 people and the destruction of entire villages and communities. Despite the attempts of the government to to bury the past, the memories linger in the minds and bodies of the living. Several years later, as Irma’s memory begins to fade the traumas of the pasts continue to haunt her. Irma’s newly diagnosed PTSD, Alzheimer’s, and dementia, urges the rest of the Noguera family to unravel the hidden treasures of Irma’s past. Aided by her husband Paco (Myles Romo) and their niece Mari (Raquel Orendain Shrestha), a recent arrival with a tragic history of her own, the family works together to hold a special celebration for the wedding of Lupita (Adianez Verdecia). As the day approaches, Irma’s condition worsens and it’s up to Mari to uncover the truth and break a curse that has silenced many.

Despite the tragedies that follow the family, “Memoria del Silencio en El Pais de La Eterna Primavera” is a spectacular story that is rich in history, family values, and loving characters. Created by the Scorched Earth Players, the play brings to the Mission Cultural Center stage a story that can resonate with several people in Guatemala, Central America, and the world at large. Audiences are transported to a lively rural pueblo through the scenic design of Yohana Ansari-Thomas and Ali Marie Toia’s costume design. Special touches of magical realism that have become synonymous with Latin American literature are captured through a magnificent ensemble that highlights the fluidity of time.

In moments such as these, in which our current administration is attempting to force “alternative facts” and discredit the free press, “Memoria Del Sielncio” is an important story that promises to tell what those in power have tried to silence.