Homelessness solution must address health as well as housing 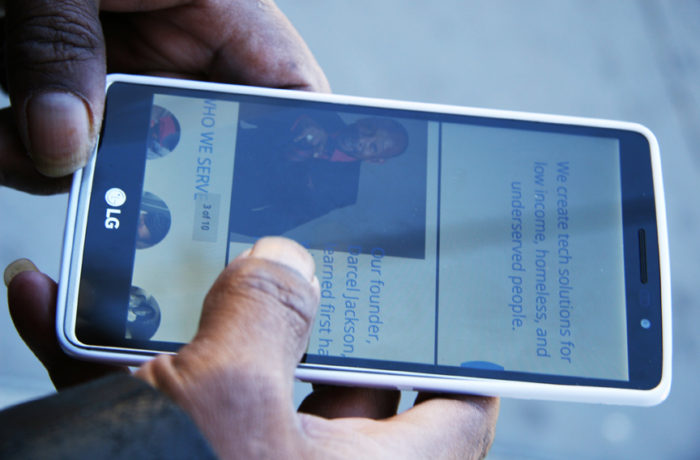 Darcel Jackson holds his mobile phone, which displays a photo of him on the masthead of AskDarcel.org a resourceful website built to help low-income, homeless and underserved people. Photo Adrian Pintor 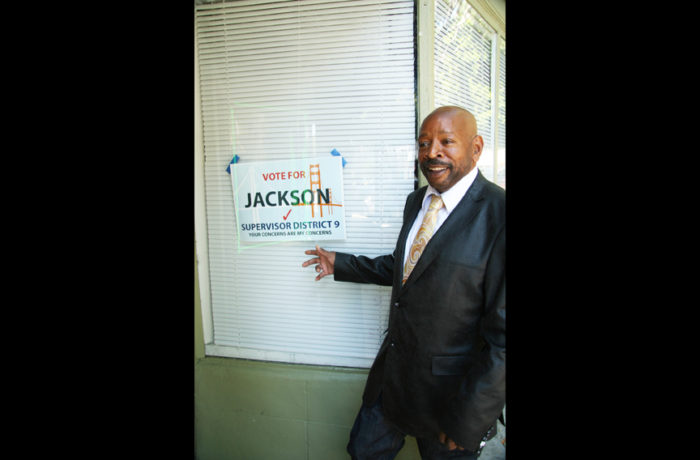 Darcel Jackson poses next to a poster for his campaign as supervisor, at the corner 24th and Lucky streets on June 26. Photo Adrian Pintor

It was 2014 and Darcel Jackson, who was homeless at the time, was laying in one of the 334 beds at Next Door Shelter, when he thought of something that shelters didn’t have: Wi-Fi.

Jackson, a Bay Area native, viewed a lack of internet access as a barrier between homelessness and opportunities for employment. While living at Next Door, a shelter at 1001 Polk St. that provides 24-hour housing in San Francisco, he realized that Wi-Fi and computers were non-existent.

“Having Wi-Fi is something that most people take for granted,” Jackson said. “They turn on their phone, they have Wi-Fi. So I thought the other half [homeless] could use Wi-Fi to better their situation, because most housing opportunities have you apply online [as do most] employment opportunities. And they need access to both those services to escape homelessness.”

Installing Wi-Fi in shelters was just the platform Jackson needed to come up with the idea of an app that could revolutionize how homeless people access housing and employment opportunities.

“Ask Darcel” is a mobile resource app designed to better inform the homeless community about housing, job listings and also serves as a contact for medical and dental centers. The app is still in its development stages, but it’s set to launch in August 2016.

One of its features is a global positioning system that will provide the user with alternative options on how to reach the service and the expected arrival time.

“Basically what it does, it keeps you from running around depending on people that live on the street to tell you where the resources are,” Jackson said.

Ask Darcel will also feature “Darcel’s List,” intended to be very similar to Craigslist. Jackson says it will enhance the way homeless individuals seek employment. The objective is to post day labor jobs, Jackson explained, where workers will earn minimum wage and move toward a more stable lifestyle.

Jackson said the app would allow the user to build a profile that will allow employers to view a headshot, full biography and a list of skills that could be applicable to specific jobs.

The app will use a 0-5 star rating system where the employer could rate the employee based on previously done work, and vice-versa. If the user reaches five stars, bigger job opportunities would be available, such as working at a restaurant, for example.

“The key is to create a motivational tool,” Jackson said.

Ask Darcel will also feature motivational games, and an avatar named “Casey,” who Jackson hopes will teach the user about case-management. The more achievements the user obtains, the more wardrobe options you get to dress your avatar. Each piece of wardrobe will be a reward, such as obtaining identification at the DMV or getting access to counseling.

Jackson worked in construction as a welder almost all of his life, but eventually work became scarce and work-related injuries convinced him that his welding days were over.

“I got old,” Jackson chuckled. “I couldn’t hang off a 30-story building and weld. Also my vision was failing.”

After the 2008 recession, it was difficult for Jackson to find work. Then Jackson lost his housing, and eventually wound up at Next Door.

Jackson spent 10 months at Next Door and several other shelters, such as The Sanctuary, until an opportunity arose to enroll in the Conquering Homelessness through Employment in Food Services (CHEFS) training program, which is offered for homeless adults by the Episcopal Community Services.

Jackson completed a six-month non-paid culinary program, and now works as a caterer and cooks every Wednesday. But during the program—one that started off with 19 students but finished with only three graduates—Jackson witnessed the difficulty many homeless people face when striving for stability. Many of his peers dropped the program due to not having housing, drug addiction or a lack of commitment.

“It was very challenging because I was 55-years-old,” Jackson said. “When I first started I already knew a little about cooking, but when I entered the program I told myself ‘You are here to learn everything,’ so that’s what I did.”

Soon after moving to the Mission District, Jackson decided to attend a town hall meeting about whether tech companies could alleviate, or better, find a solution to homelessness.

The town hall was held by tech entrepreneur Greg Gopman, founder of AngelHack who made headlines in 2013 for an infamous Facebook rant about San Francisco’s homeless, in which he referred to them as “degenerates” and “trash” among other insults. Gopman apologized almost immediately for his comments, and has since decided that solving San Francisco’s homelessness problem is a worthy endeavor.

At that town hall, Jackson realized the meeting wasn’t an open forum. A guest had to text their question into a pool of questions, and if it got enough “likes,” the panel would answer.

“It was all high tech,” Jackson said. “So I thought to myself: ‘Homeless people don’t have access to this type of stuff [internet], so they can’t even participate in a discussion that is designed to help them.’”

It was at that moment Jackson realized that not having access to the internet in this era can impair an individual’s ability to improve their living status or even have their voice be heard at hall meetings.

This motivated Jackson to approach Gopman about the idea of installing Wi-Fi in homeless shelters. Jackson said they talked and Gopman brought MonkeyBrains—an internet service provider—to the table.

According to Jackson, Next Door Shelter wasn’t interested in computers, but liked the idea of installing Wi-Fi. Wi-Fi has since been installed at Next Door and both Jackson and Gopman have created Shelter Tech, a nonprofit. Since then, they have been working to bring Wi-Fi to two low-income housing projects in the Tenderloin by August 2016.

Jackson also announced his candidacy for District 9 Supervisor, but had to drop out due to financial reasons. He has since decided to work with candidate Josh Arce on how to approach homelessness.

“It’s a social hazard,” Jackson said. “It’s pretty much everywhere, but the way you deal with social hazards, just like we do with earthquakes, first we need to alleviate the problem and then put safeguards out there, so people attack homelessness before people become homeless.”