Mexico’s unheralded feminist pioneer to finally be given her due 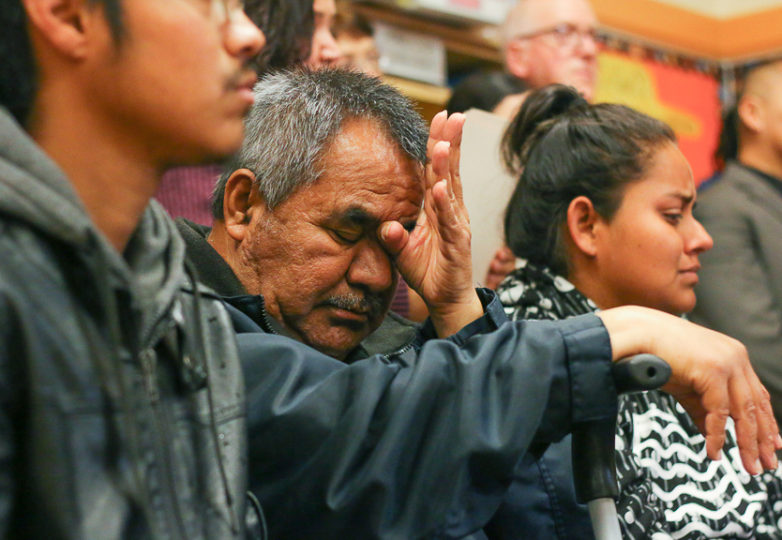 The father of Jesus Adolfo Delgado-Duarte, sits next to his two children at Cesar Chavez Elementary School, where SFPD and community members held a town hall meeting for Delgado-Duarte who was killed by SFPD in the Mission District on March 6, 2018. Photo: Erica Marquez 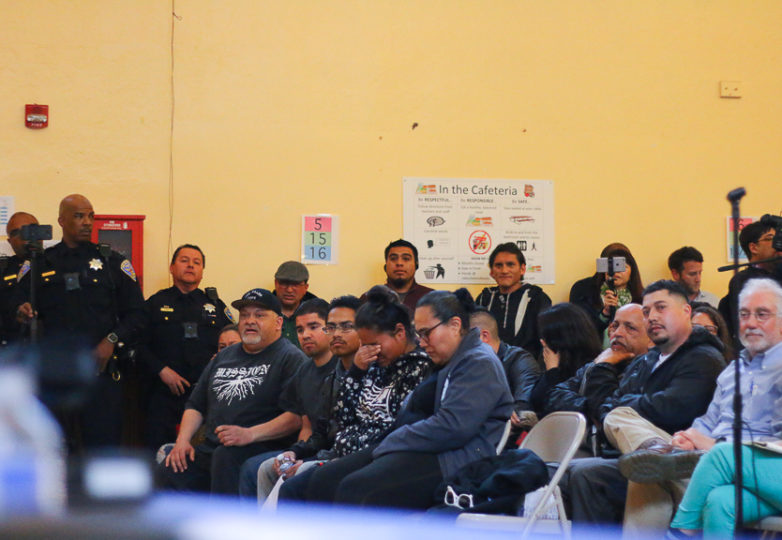 Visibly shaken family members react during a town hall meeting at Cesar Chavez Elementary School. Community members and police held a town hall to discuss the shooting of Delgado-Duarte, a 19 year-old man who was killed by SFPD officers in the Mission District on March 6, 2018. Photo: Erica Marquez 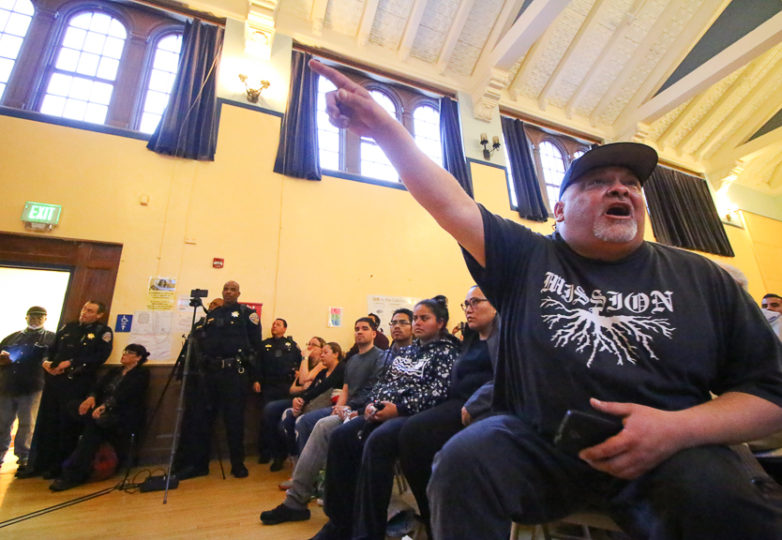 A community member shouts at police during a town hall meeting at Cesar Chavez Elementary School. SFPD held a town hall for community members to discuss the shooting of Adolfo Delgado-Duarte, a 19 year-old man who was killed by police officers on March 6, 2018 in the Mission District. Photo: Erica Marquez 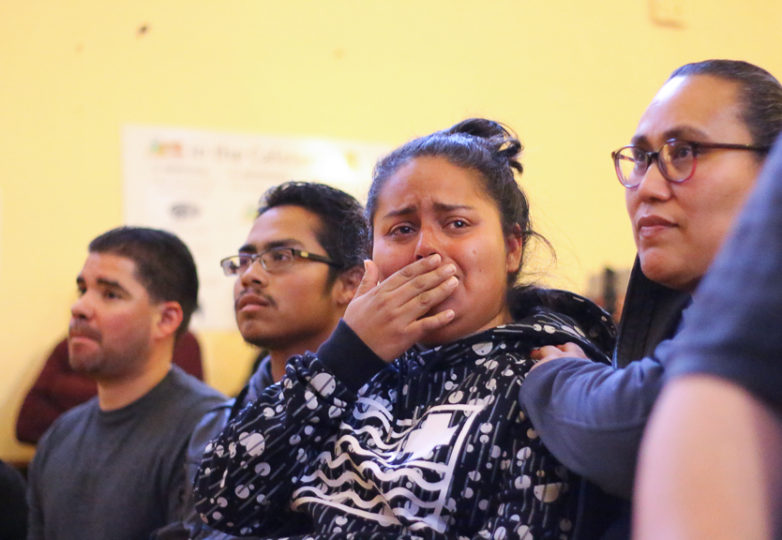 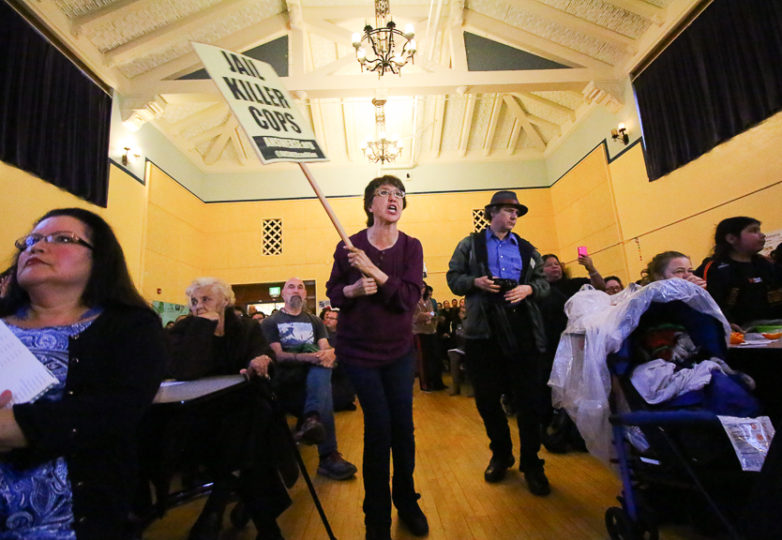 A woman holding a “jail killer cops” sign shouts during a town hall at Cesar Chavez Elementary School. SFPD held the meeting for community to discuss the shooting of Adolfo Delgado-Duarte, a 19 year-old man who was killed by officers in the Mission District on March 6. Photo: Erica Marquez 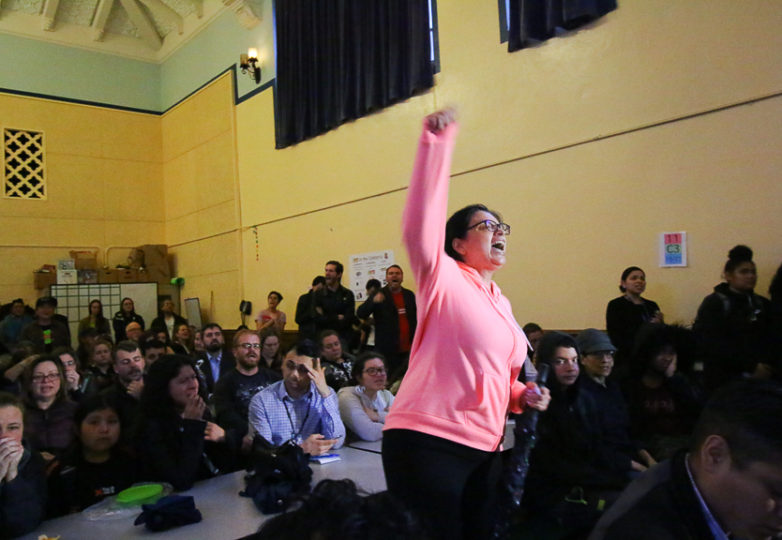 During a tense town hall meeting at Cesar Chavez Elementary School, a woman shouts at the showing of police body cam footage. Police held a town hall to discuss the shooting of Adolfo Delgado-Duarte, a 19 year-old man who was killed by SFPD officers on March 6, 2018 in the Mission District. Photo: Erica Marquez 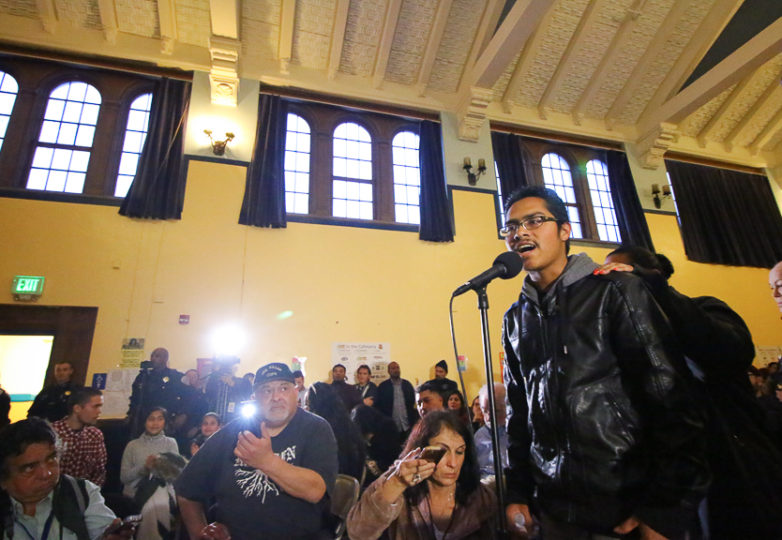 Victor Torres, the brother of Adolfo Delgado-Duarte speaks to police during a town hall meeting held at Cesar Chavez Elementary School. SFPD held a town hall for community members to discuss the shooting of Delgado-Duarte, a 19 year-old man who was killed by officers in the Mission District on March 6, 2018. Photo: Erica Marquez 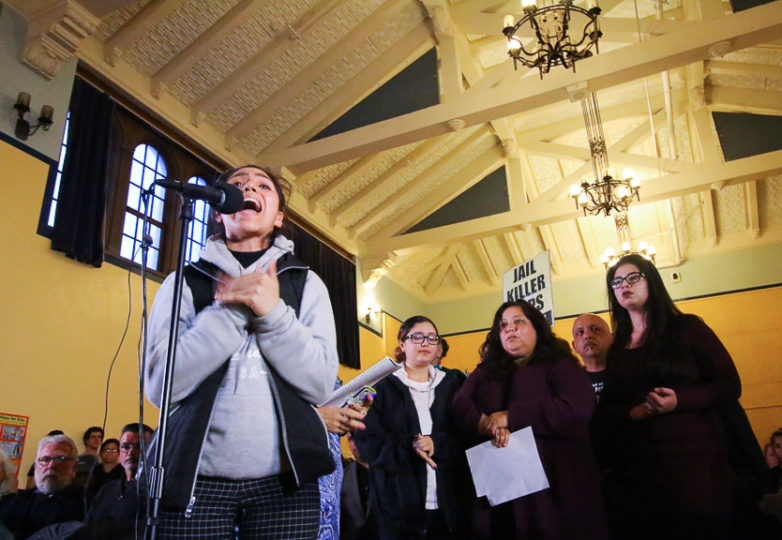 Marjory Rodriguez, a friend of Adolfo Delgado-Duarte, speaks to officers during a town hall meeting at Cesar Chavez Elementary School to discuss the shooting death of Delgado-Duarte. Delgado-Duarte was a 19-year-old man killed by SFPD officers on March 6, 2018 in the Mission District. Photo: Erica Marquez

Over the course of the nearly four-hour townhall meeting held by the San Francisco Police Department on March 12, the crowd gathered at Cesar Chavez Elementary School repeatedly expressed its outrage and disgust at the footage of 10 officers shooting at 19-year-old Jesus Adolfo Delgado-Duarte 99 times as he lay inside the of trunk of a car.

Police Chief William Scott, Mission Station Captain Gaetano Caltagirone and Captain Valeria Matthews of the SFPD Major Crimes Unit addressed the crowd, discussing in detail the fatal incident, which occurred March 6 at Capp and 21st streets. The officers presented their facts as they showed the footage from that evening. The shooting took place after two officers were flagged down by two victims of a robbery a little after 10:30 p.m.

In a video presented by SFPD, Delgado-Duarte could be seen running on foot and jumping into the trunk of a black Honda Civic.

According to Capt. Matthews, law enforcement pulled in behind the Honda Civic and activated their emergency lights and conducted a traffic stop. Officers ordered the driver, 19-year-old Victor Navarro-Flores out of the car and then noticed Delgado-Duarte in the open trunk of the vehicle and was ordered to show his hands. The passenger and second suspect in the robbery is Cristina Juarez, a 17-year-old female who remained in the vehicle during the altercation.

Delgado-Duarte refused to comply as officers spoke to him in English and Spanish, at which point one officer discharged a bean bag shotgun. Then the 19-year-old allegedly pointed a gun and fired from inside the vehicle toward the officers. The 10 officers fired back, with 25 rounds striking Delgado-Duerte. A 9mm handgun was later recovered by SFPD in the trunk of the black Honda Civic.

Friends and family of Delgado-Duarte say that he hid from police because he was afraid of being deported to Mexico.

“On behalf of my family I would like to ask you to stop saying you’re sorry because after this, nobody’s going to believe that you’re sorry,” Delgado-Duarte’s older brother, Victor Torres, told the SFPD after they offered their condolences to the grieving family in their initial statement. “You are nothing but murderers, you killed him. If he did something wrong, okay, judge him for it, but he did not deserve this. He was a scared 19-year-old. You guys took him from my mom and you don’t know how bad she’s suffering, so please don’t tell me that you’re sorry.”

“It doesn’t get harder than this—especially meeting Adolfo’s mom,” said an emotional Hillary Ronen, the Supervisor for District 9, which includes the Mission District. “I’m a mom of a 5 year old. There’s no way you could prepare yourself for looking a mother in her eyes and just saying ‘I love you and I’m so sorry.’ I doesn’t get harder than this. And the pain of this community is so deep and it’s based on so many different factors; police violence being one of those factors.”

Delgado-Duarte, an undocumented teenager who grew up in the Mission District and attended John O’Connell High School, was a founding member of the Boys & Girls Club program at Alabama and 21st streets. After graduating he began working at the local Metro PCS store in the neighborhood.

“He was a funny kid,” said Corado. “He’s a jokester. He enjoyed being at the club. His mother and father would have to come get him at the end of the night and pull him out because he didn’t want to leave. He was one of those kids that just wanted to stay and enjoy the opportunity he had to be at the center.”

Family members didn’t speak after the meeting, but a few friends shared their memories of Delgado-Duarte.

“He was very kind, he was cool with everybody,” said Marjory Rodriguez, who was a close friend. ”He was nice with everybody. He was really kind and always had a smile on his face. He was very involved in his community.”

“There is no bigger reform than keeping people with guns accountable,” said Frank Lara, a teacher and activist, who suggested during a news conference prior to the town hall meeting that the involved officers should be fired. “If they actually want a reform, they should send a message.”

Delgado-Duarte is among a growing list of Black and Brown people who have been killed by San Francisco law enforcement in recent years.