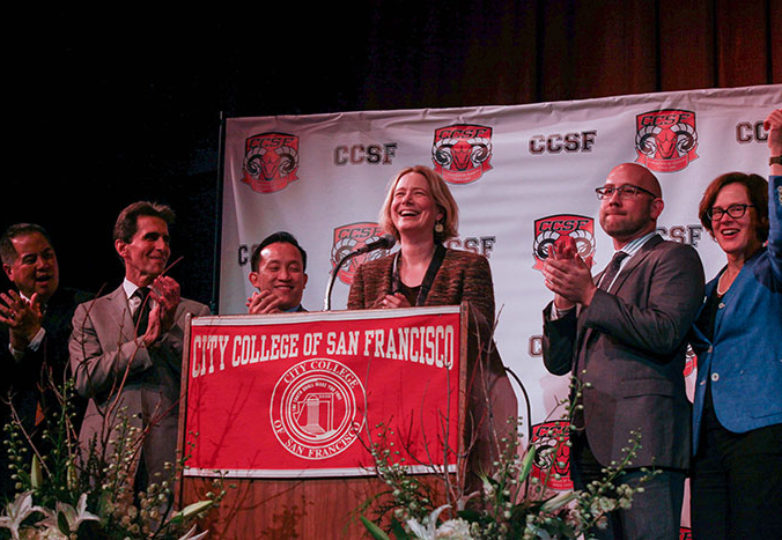 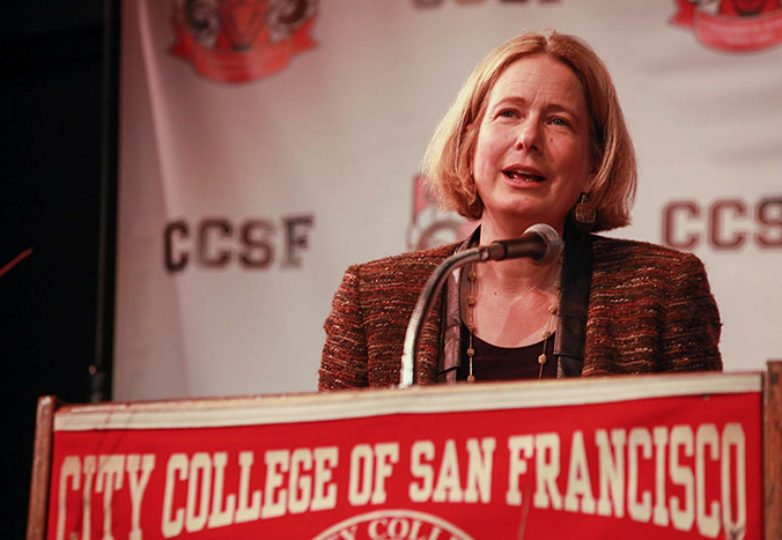 Interim Chancellor Susan Lamb vocalizes her gratitude at the Diego Rivera Theater at City College of San Francisco on Jan. 13, 2017 for the reaffirmed accreditation of City College. (Photo by Cassie Ordonio/The Guardsman 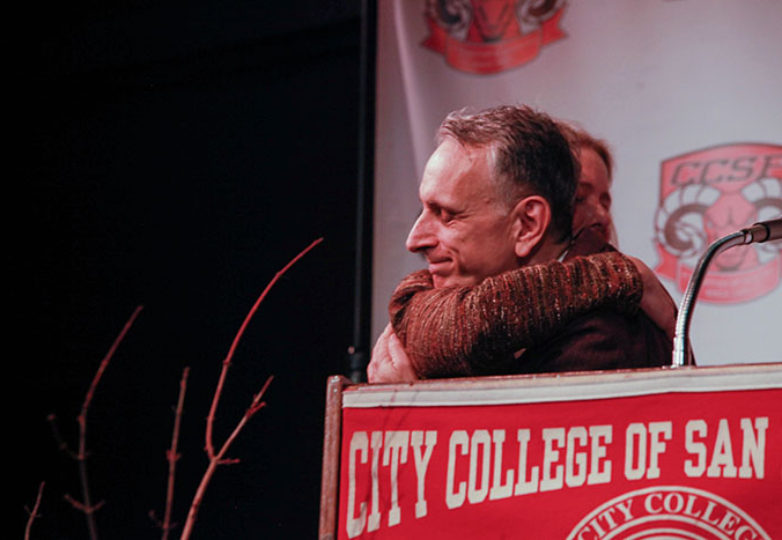 City College of San Francisco’s Interim Chancellor Susan Lamb embraces CCSF Board of Trustee John Rizzo after it was announced that the college reaffirmed its accreditation for the next seven years. (Photo by Cassie Ordonio/The Guardsman)

City College of San Francisco officials were expecting the unexpected when the college’s accreditation was reaffirmed for another seven years by the Accrediting Commission for Community and Junior Colleges (ACCJC), the governing body which had once threatened its future.

During a Jan. 13 news conference at the Diego Rivera Theater, a crowd erupted into applause and gave a standing ovation when Interim Chancellor Susan Lamb gave the official announcement.

“I got to admit, I was speechless––it was a singular moment,” Lamb said.

The commission had planned to meet for a three-day period this month, but its verdict wasn’t expected until sometime closer to Valentine’s Day.

Lamb received the email of confirmation just 30 minutes before she received a call from the ACCJC that afternoon. She expressed her gratitude shortly after, in an email sent to the college community.

“I especially appreciate the leadership within the Academic Senate, the Classified Senate, the Associated Students, the Department Chair Council, AFT 2121, SEIU 1021, the administrators, and the Board of Trustees, who stepped up to ensure such a positive outcome,” Lamb said.

In 2012, the ACCJC was set to terminate the college’s accreditation. The following year the college was on the verge of closing, which heavily impacted student enrollment and resulted in a slight rift between faculty and administration.

The college went from serving approximately 100,000 students to 65,000, according the headcount data on CCSF’s website.

CCSF’s newspaper, The Guardsman, reported that the “ACCJC, in a 2013 lawsuit in San Francisco Superior Court by City Attorney Dennis Herrera, was found guilty of ‘significant unlawful practices’ in their attempts to terminate City College’s accreditation.”

Protests boomed throughout the CCSF campus community, as the teachers union AFT 2121 and many other allies sounded the alarm to fight for fair accreditation.

CCSF barely survived when in 2013 it was put on “show cause,” a conditional status where it was required to meet a number ACCJC demands or lose accreditation.

The ACCJC’s visiting team returned to CCSF back in October with new standards and practices that have been changed slightly over two years, but highlight four standards: focusing on improvement of quality; student outcomes; improving consistency and clarity of standards; and practices.

Most recently, the college is focused on rebuilding enrollment.

“The college has learned a lot,” Trustee Tom Temprano said. “The trustees will be keeping a closer eye on things than past boards may have, and I’m confident seven years from now that we’ll get good news again.”

The CCSF community is hopeful history will not repeat itself.

“I think the likelyhood is not a possibility because now we’re on a regular cycle,” said AFT 2121 President Tim Killikelly. “The accreditation crisis should have never happened in the first place and it really was the commission out of control, and so hopefully this is a sign that ACCJC will be fair.”

The risk of an education without purpose

With time to act on climate change running out, San Franciscans get down to business