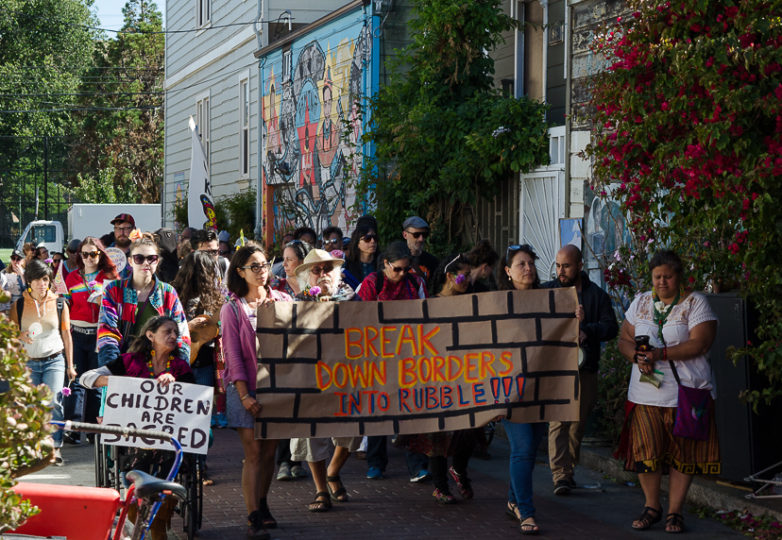 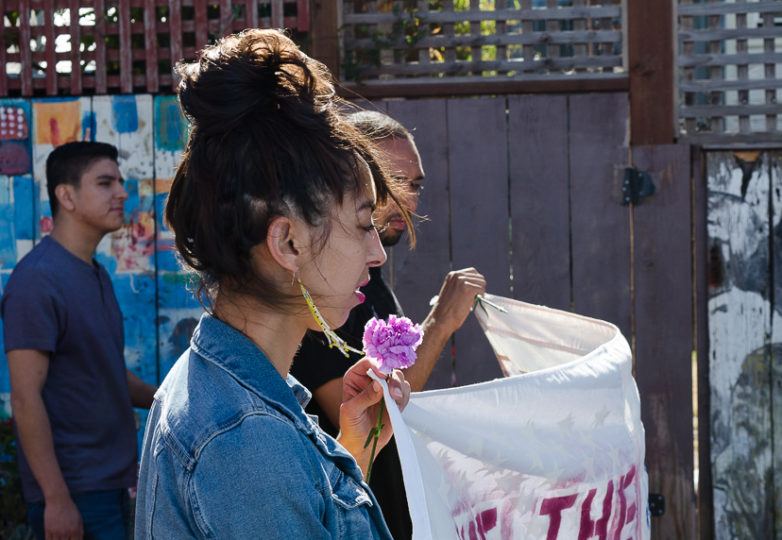 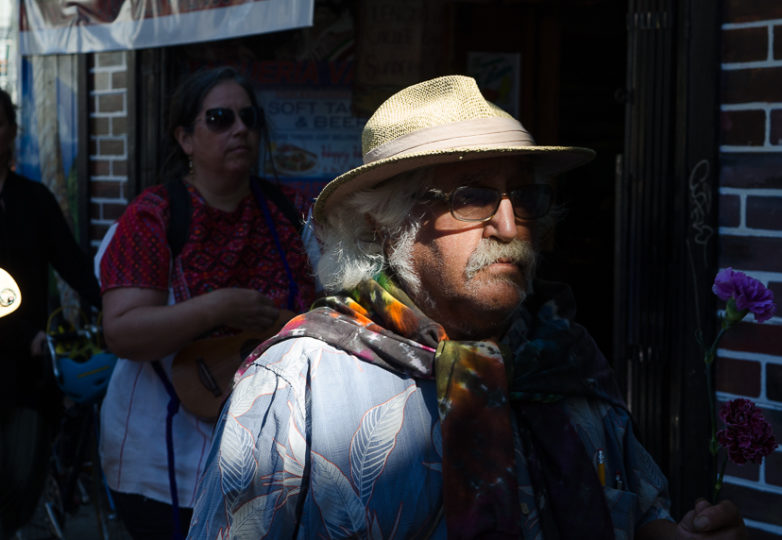 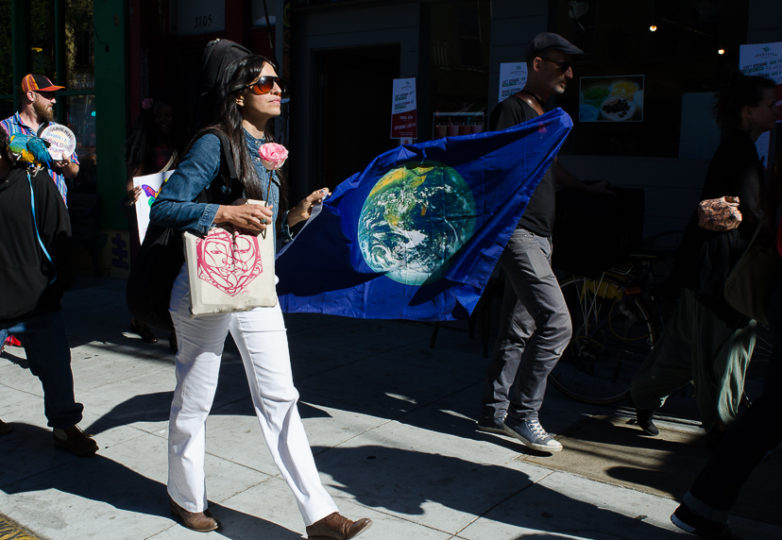 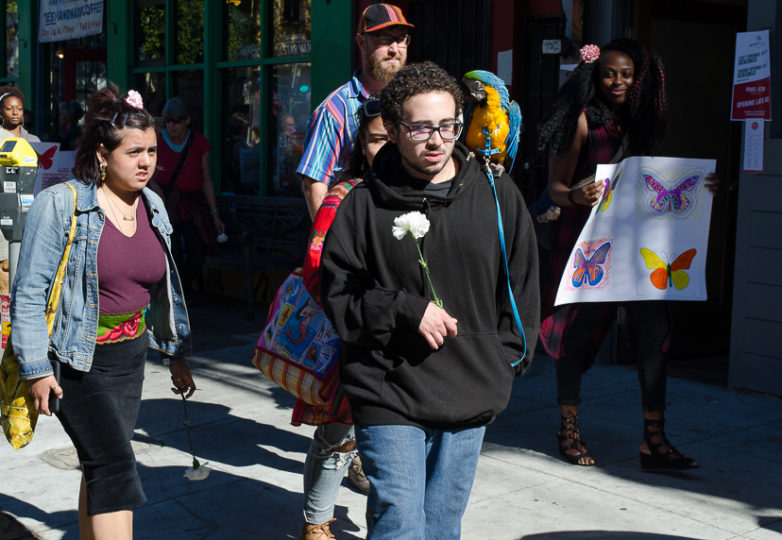 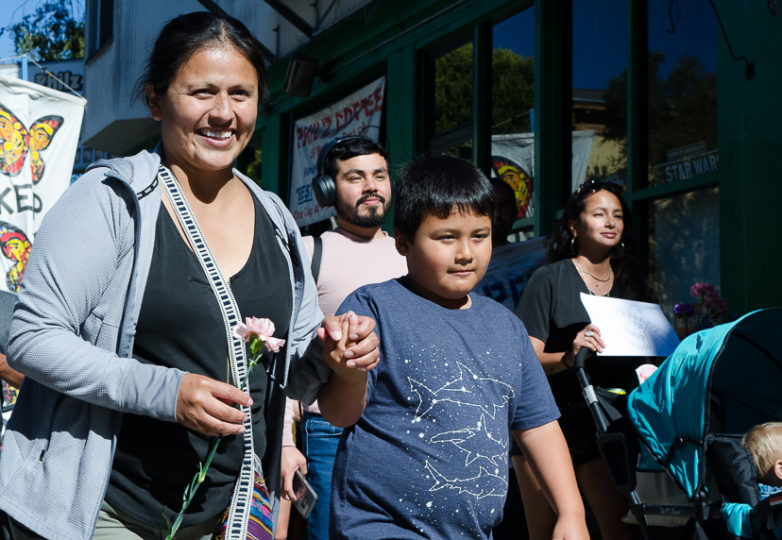 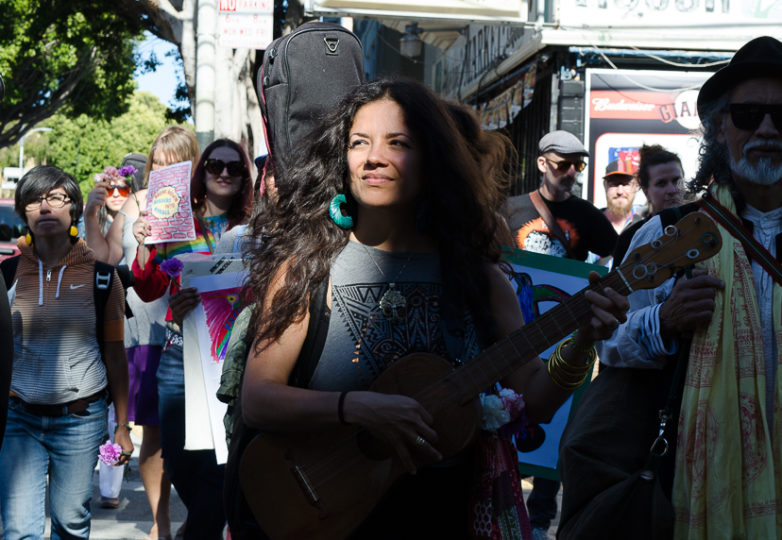 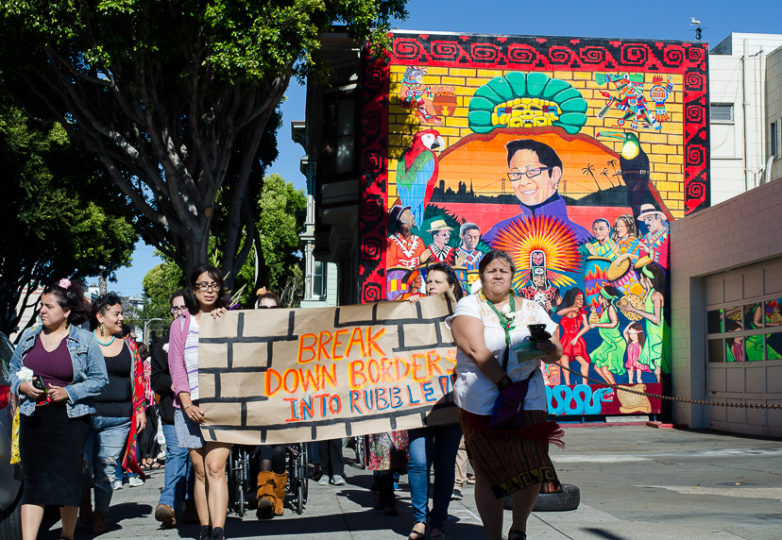 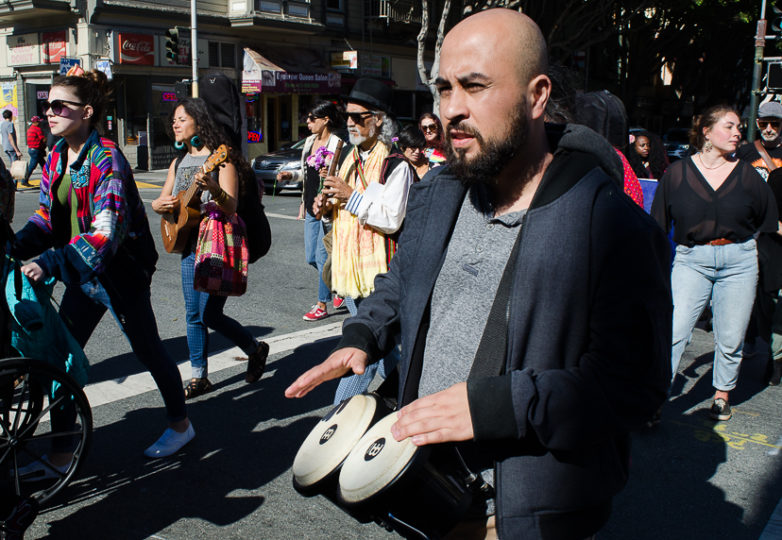 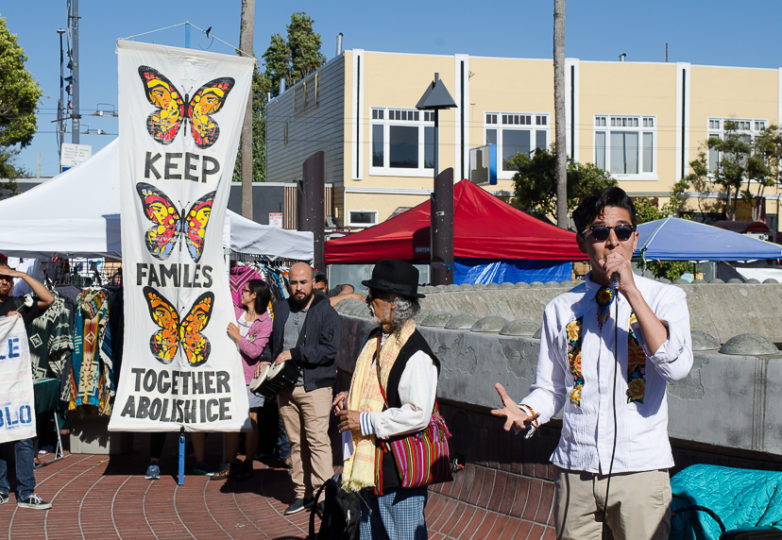 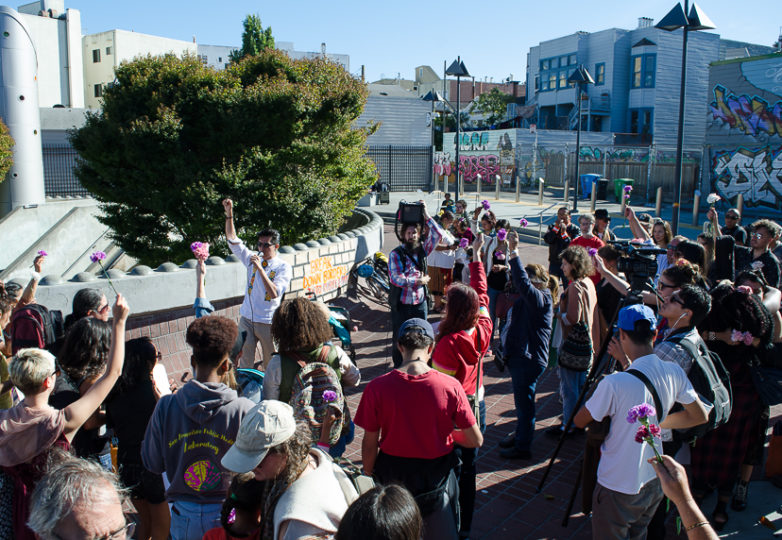 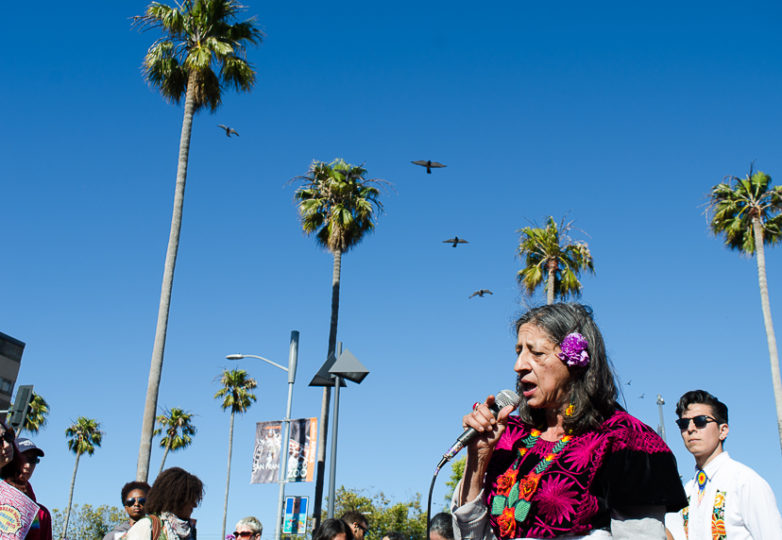 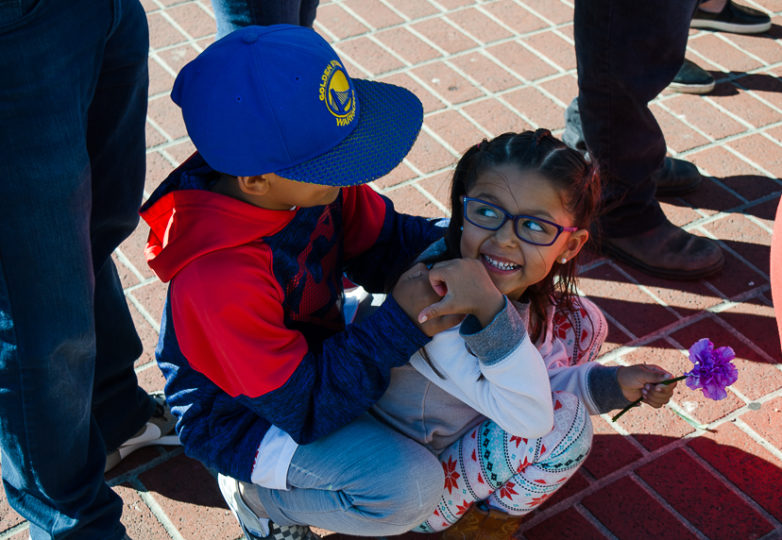 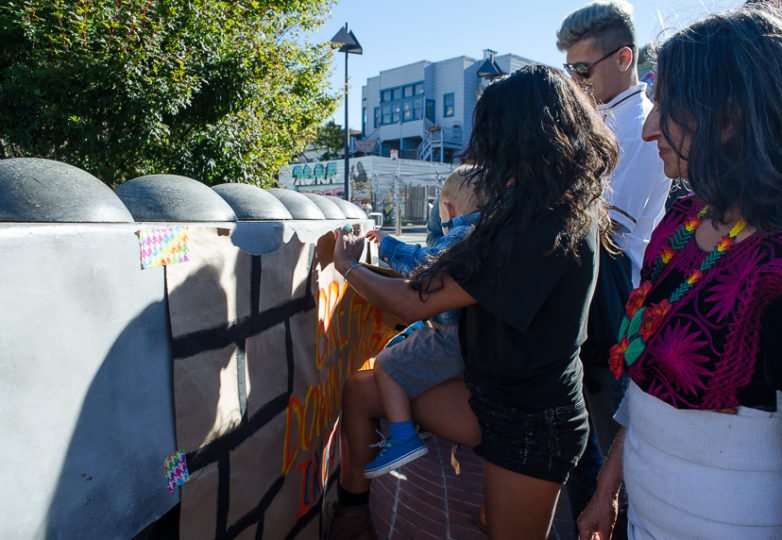 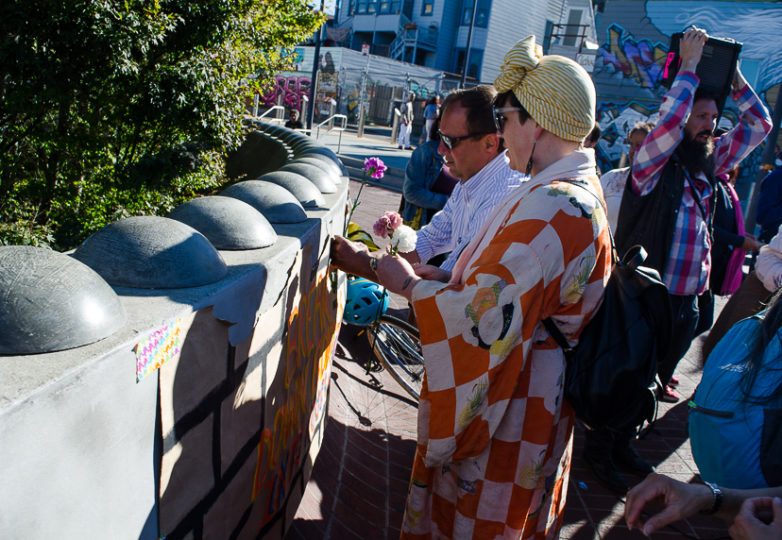 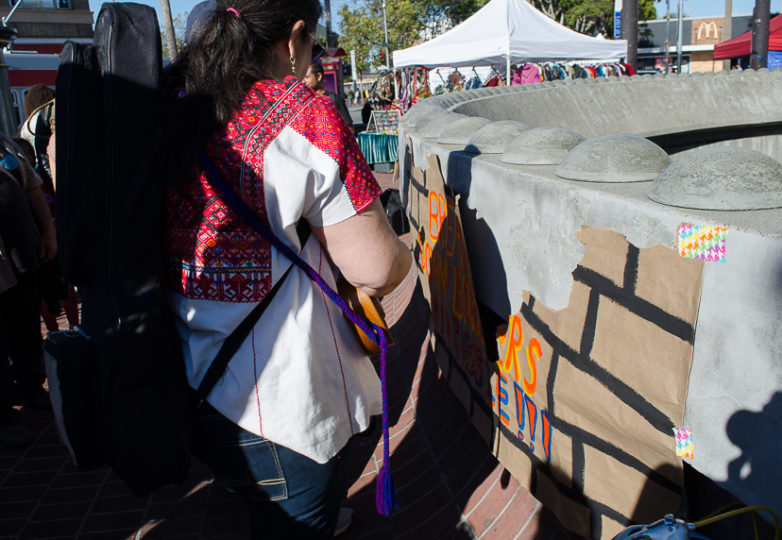 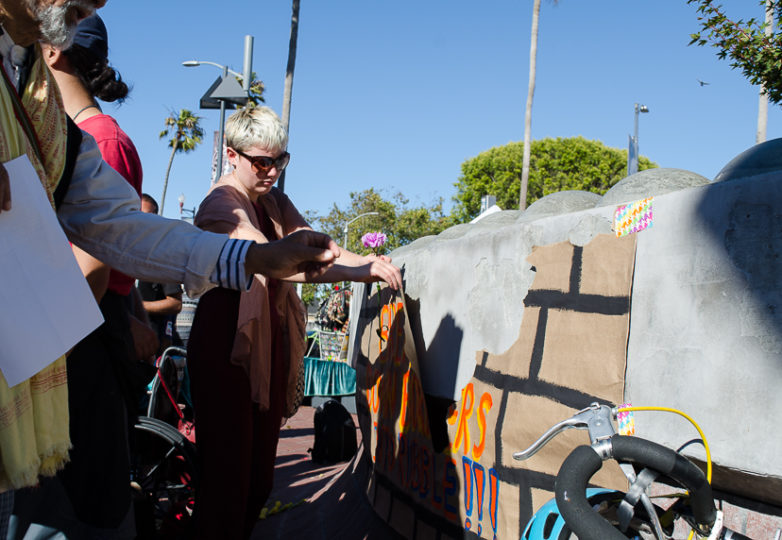 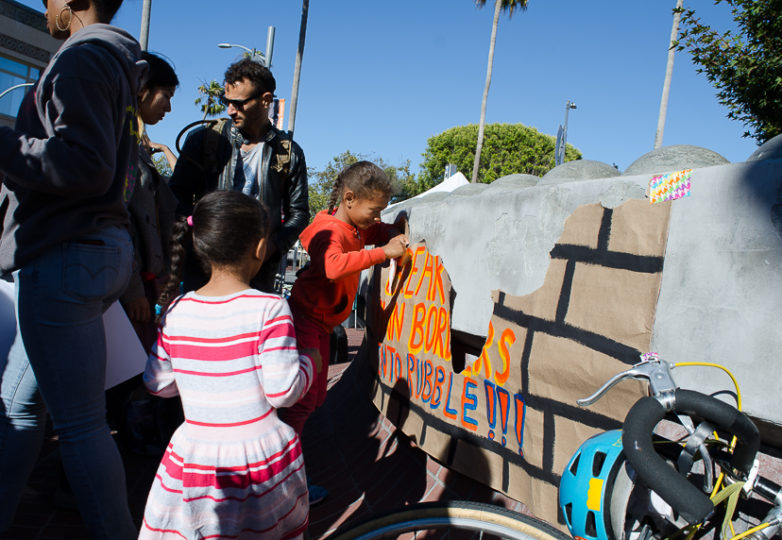 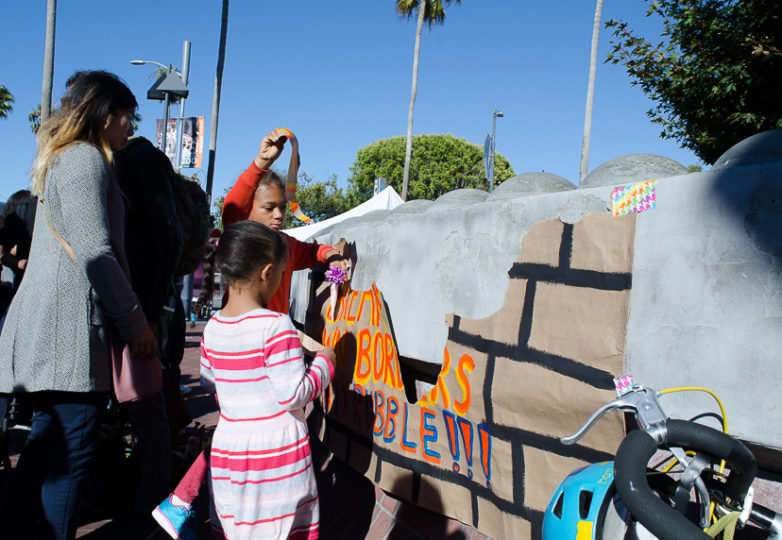 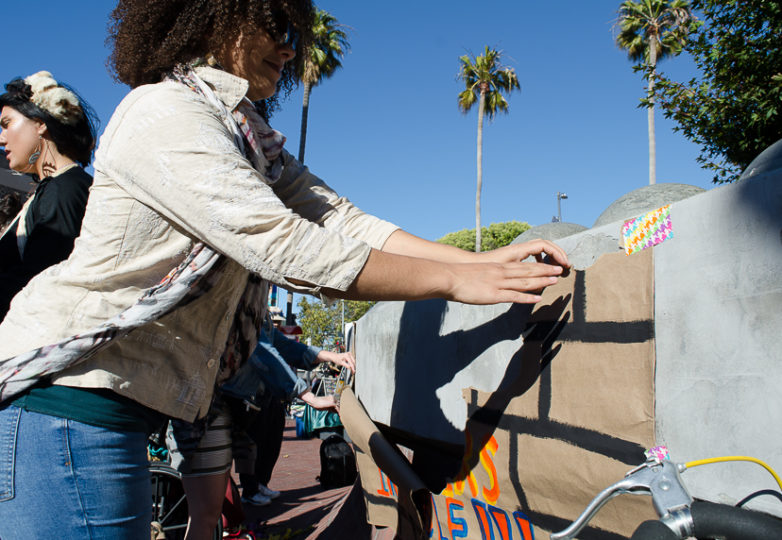 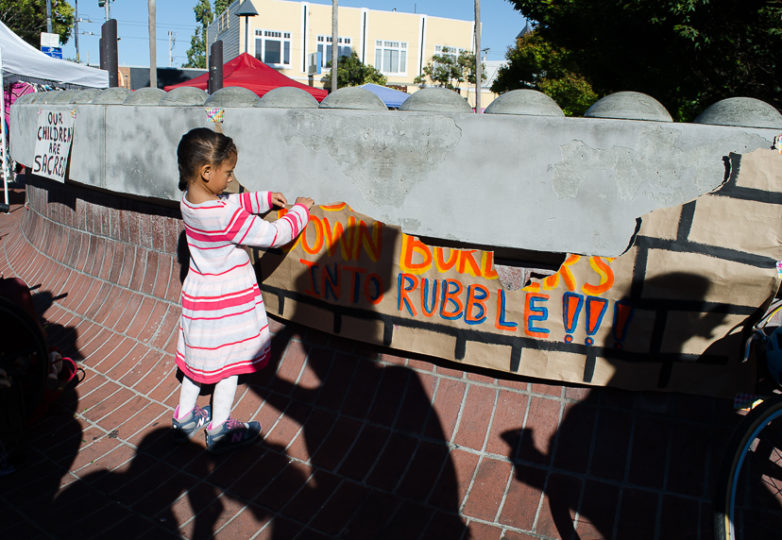 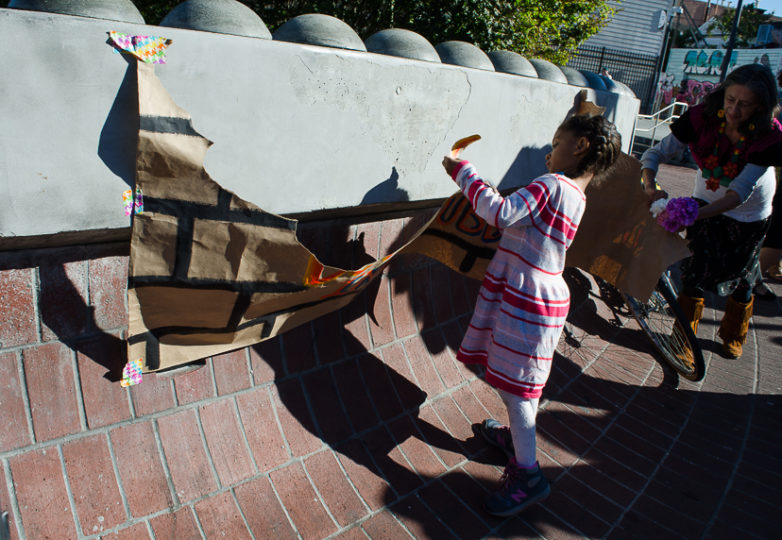 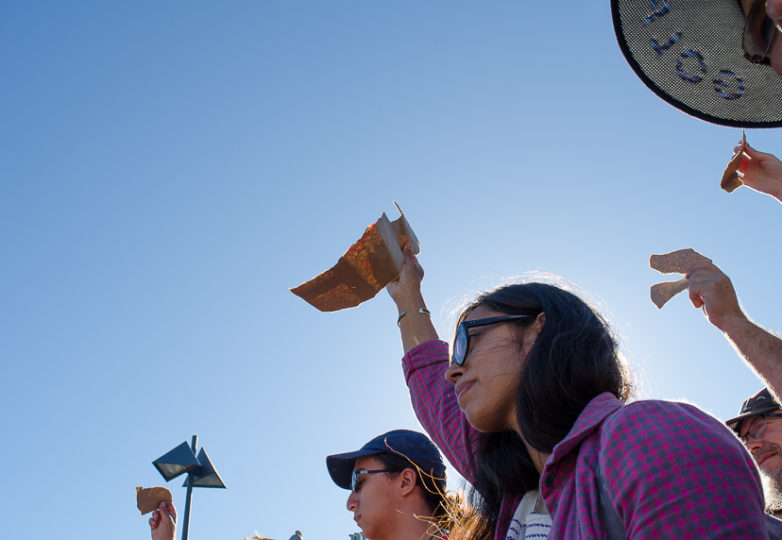 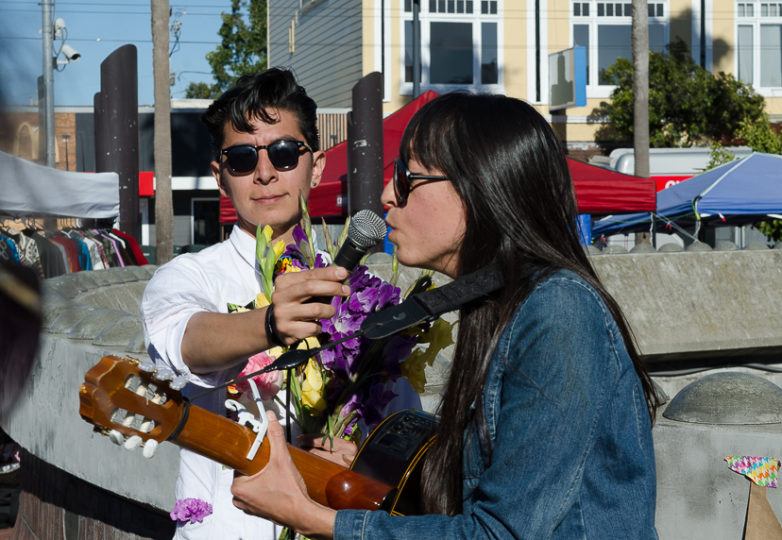 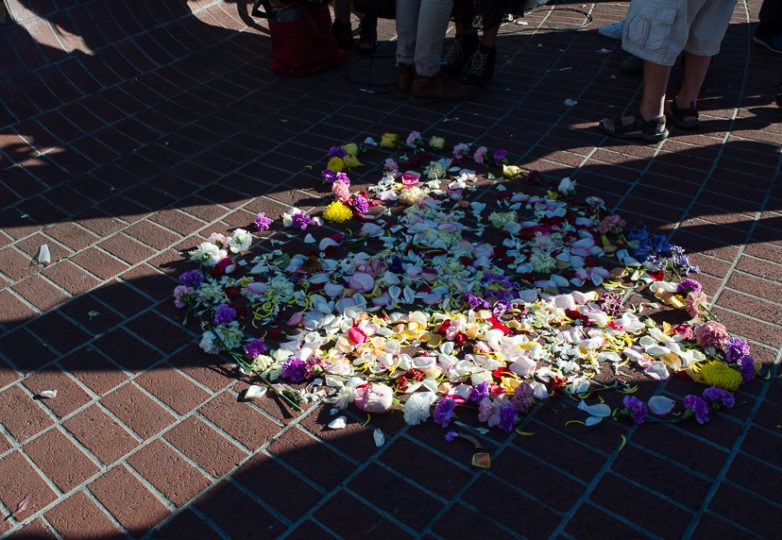 Local artists participating in the day-long art and performance crawl, “Break Down Borders into Rubble,” on Aug. 4, as part of the bimonthly Mission Arts Performance Project (MAPP), proved that a paint brush, marker or instrument can be a mighty tool in resisting oppression.

The crawl began in Garfield Park with a family art-making event. From there processioners would travel down on Harrison Street, to 24th Street Bart Station, and then to six Mission establishments for performances by singers, dancers, poets and word contortionists.

They marched behind colorful signs and banners made at the art event. The signs— mostly hummingbirds and butterflies with slogans such as “Freedom to Return,” “Freedom to Stay,” “Break Down Borders into Rubble,” and “Amor, Paz, y Libertad”—were numerous, but the most eye-catching was the paper “border wall” about 10 feet long that would be “broken down,” toward the end of the art crawl.

“Break Down Borders into Rubble” was organized by 42-year-old Mission native Jason Wyman, who said he wanted to make a meaningful impact. Wyman described how the theme of this MAPP was decided upon in meetings because MAPP wanted to explore “how they as artists, create opportunity for art and expression to take a look at the current issues at our borders and tearing down those borders down into rubble.”

“It’s really about how we as artists can contribute back to our community,” Wyman said, adding that borders are being used as political tools.

Wyman considers himself a “social impact artist.” He has participated in MAPP events off and on for the past seven to eight years, and describes MAPP as “a group of artists from all over the Mission that do a bi-monthly happening.”

MAPP, according to its website, is “a familia, a community and a series of arts, music and activist events that has been taking place in the Mission for over 14 years.”

Melissa San Miguel, a 32-year-old Mission native who can remember playing in Garfield park as a child, was participating in her first MAPP event. She got involved, she said, to be able to connect with other artists and her community.

“It’s important. To be able to have a space where we can be together and talk about these issues,” said San Miguel. The art making event was her opportunity to use her craft “to make visuals to make a message.”

Both San Miguel and Wyman agree that the power of an event like this lies in the people themselves and in the grassroots effort to mobilize. After Wyman put out the call to organize, a stream of donations came pouring in.

“This is the core idea: that the community is resilient. Within a week, we had food, space, supplies and donations. The community came and provided,” said San Miguel.

As a daughter of Peruvian immigrants, San Miguel said the message of breaking down borders was personal to her.

“About 90 percent of our family is in Peru…so that idea of being separated by land, by borders, by money, has impacted our family.”

San Miguel witnessed the impact of family separation firsthand on a visit to the infamous detention center for unaccompanied minors in McAllen, Texas in 2014, while she was working for the National Center for Youth Law.

She interviewed minors about what brought them to the border and how they had been treated upon arriving.

“We were there to investigate the conditions under which the kids were being detained in. The government has a legal responsibility to ensure that they are being treated well,” San Miguel said.

She called conditions in the detention center she visited in 2014 “inhumane,” and though she hasn’t been back since, she doesn’t imagine they’ve gotten any better.

However, she noted that the issue of family separation and the ill treatment of unaccompanied minors is receiving more attention now because of the Trump administration’s “actions to dehumanize various people of all different races.”

“Being able to participate in ways vocally and visually with my community really matters because I know the stories of these families.”

Keegan Roberson, 36, has lived in San Francisco for 15 years, but her upbringing was impacted by her childhood near the border in San Diego.

“Growing up around a border is something I’m used to,” said Roberson, who was also participating in her first MAPP. She explained how her thinking on the subject of borders has shifted dramatically since she was a youth.

When Roberson was in school, she knew of many students who lived on the Mexico side of the border, but would use a family member’s address that lived in the United States, in order to have access to the better public schools.

She said she used to complain about the students who falsified their address, and would say that they were taking time and resources away from American students. But as an adult, she has a different perspective.

“What a pain in the ass that must have been. To have to wake up so early every morning and have to deal with crossing the stupid border and how long that takes, just to get to school by 7 a.m. What a hassle,” said Roberson. “The lengths that other people go through to better themselves is sobering.”

These experiences are what pushed Roberson to join MAPP and lend her art to the project.

“I want to share my skills, time, and my privilege for something that’s bigger than me,” she said.