The story of Dolores Clara Fernandez Huerta—a key figure in American civil rights history and one of the most influential leaders of the Chicano Civil Rights and farmworker movements—has been largely overlooked in the mainstream. Until now.

“Dolores,” a powerful 95-minute biopic chronicling Huerta’s upbringing and activist career, debuted this month in theaters across the country. The film, directed by San Francisco’s Peter Bratt (who also directed the 2009 film “La Mission”), spotlights the Mexican-American activist, whose story has long been overshadowed by her contemporary and fellow activist Cesar Chavez.

“It was a discovery process for me personally, learning about all that she did,” said Bratt, who was traveling through the Bay Area with Huerta on Sept. 6 to promote the new film. “I had been personally inspired by her and Cesar and their work.”

But the actual idea for the film was the brainchild of Carlos Santana. Santana phoned Bratt about five years ago with the idea of making a movie about Huerta’s lifeswork. 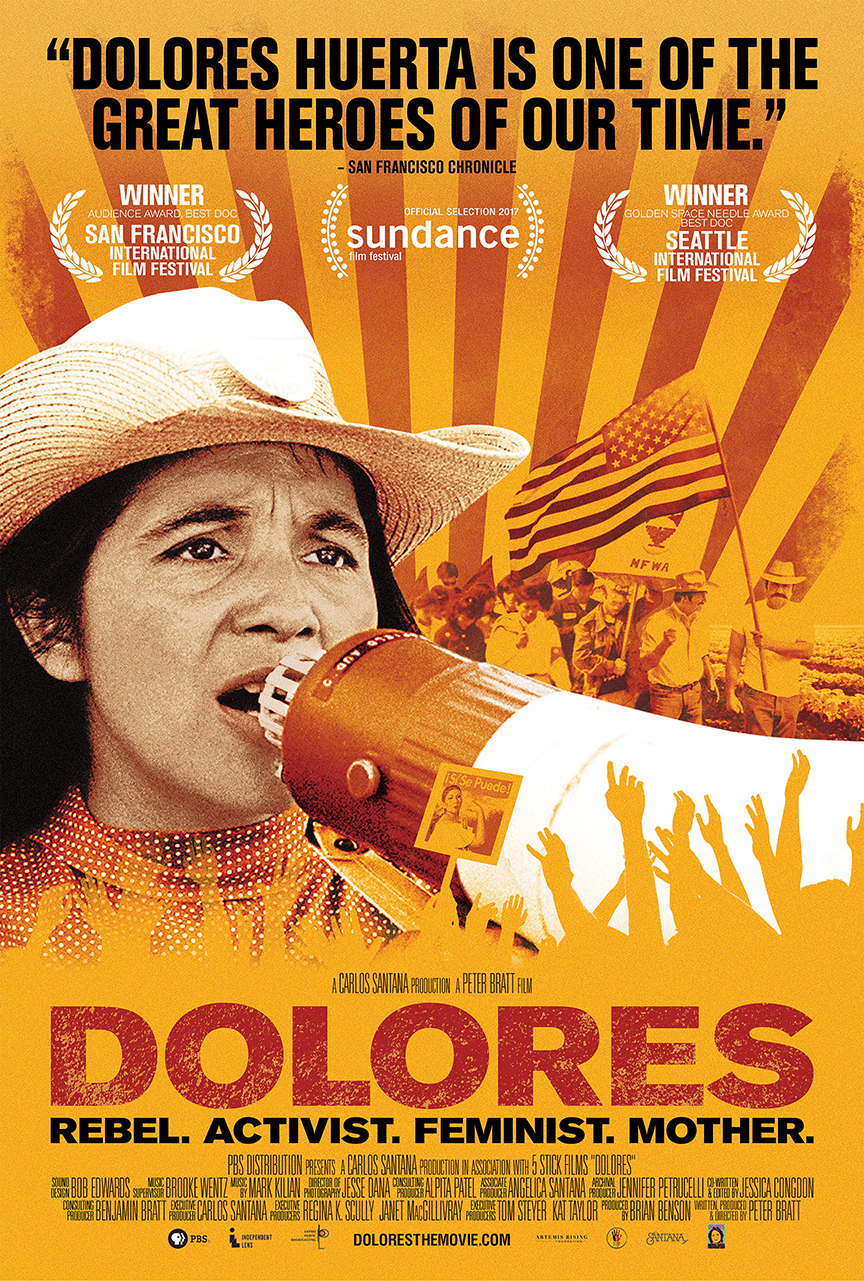 “‘Peter, we need to make this film,’” Bratt remembered Santana telling him. “He put a stake in the ground and he said, ‘Let’s go, let’s do this now.’ And that really set the ball rolling so to speak.”

Huertas’ career in activism began in the small northern California town of Stockton in 1955, when she co-founded the city’s local chapter of the Community Service Organization. But the seed of activism had been planted long before that.

Born on April 10, 1930 in Dawson, New Mexico, Huerta was taught to serve and lead early on by her parents, who were also community activists. Her father, Juan Fernandez, was a farmworker and union activist who eventually became state assemblyman. Her mother, Alicia Chavez, was also involved in civic organizations, and is Huerta’s biggest inspiration in life.

“She always told me not to be afraid to speak out if I was thinking of something—that I shouldn’t keep that thought to myself, that I should feel confident, that I should be able to express it, even if sometimes you say the wrong thing,” Huerta told El Tecolote. “She was always pushing me out there to be in the public eye.”

Huerta’s mother, who was also a waitress and cannery worker, eventually bought a small hotel and restaurant. Her compassionate treatment of farmworkers is what inspired Huerta to become a civil rights leader herself.

In 1962, Huerta along side of Cesar Chavez, co-founded the United Farm Workers (UFW) to advocate and organize the thousands of disenfranchised farmworkers in California’s Central Valley. To this day UFW serves as a labor union with a mission to facilitate and ensure equality for marginalized communities in 10 states.

In 1965, UFW, with Chavez and Huerta in charge, joined forces with the Agricultural Workers Organizing Committee in Delano, CA, to strike against the table grape growers in the area.

“The main thing about the Delano grape strike that people don’t know is that before that strike took place, we had been organizing there in the Central Valley for three years—setting up committees, doing house meetings, getting people informed, letting them know that they could again have the power to change their lives,” Huerta said.

“It took a lot of organizing to sustain that strike for five years,” said Huerta. “We never would have won had it not been for the American public. Many people who came out there and didn’t buy grapes, and picketed their local stores. They’re the ones who really made it happen. We probably could’ve been on strike for 10 years and we never would’ve won. It was only with the help of the American public.”

Aside from strikes, Huerta’s political activism has also led to the passing of state and federal legislation.

“You can go to the DMV and you can take your driver’s test in Spanish or Mandarin, and that’s because of some of the work that she did,” Bratt said of Huerta. “So she’s been behind many laws in California that eventually became national laws.”

Huerta also coined the famous phrase, “Si se puede”—which Barack Obama translated and used during his 2008 presidential campaign. She explained that the phrase was actually a  spontaneous reaction during Chavez’s 25-day fast in Arizona in 1972.

Her activism has come at some cost though.

In 1988, she was assaulted by San Francisco police officer Francis Achim outside of the St. Francis Hotel during a protest against then vice president George H. W. Bush, who was holding a $1,000-a-plate fundraiser there. Huerta, who was 58 at the time, was taken to San Francisco General Hospital where she was diagnosed with two broken ribs and a ruptured spleen, the result of Achim striking her with his baton.

But Huerta recovered and persevered.

She founded the Dolores Huerta Foundation in 2002, a community organization that continues to organize at a grassroots level in nine different communities. And for her work fighting in the trenches against inequality and discrimination, she was awarded the Presidential Medal of Freedom in 2012.

Despite the many accomplishments of her illustrious career, it’s the actual organizing that Huerta is most proud of.

“I want to be remembered as an organizer, as a facilitator—maybe as a teacher, I was a teacher and teaching people how to organize.”

“Dolores” is now in theaters. It will be showing at the Opera Plaza Cinema from Sept. 14-21. For more information on the film visit: Doloresthemovie.com