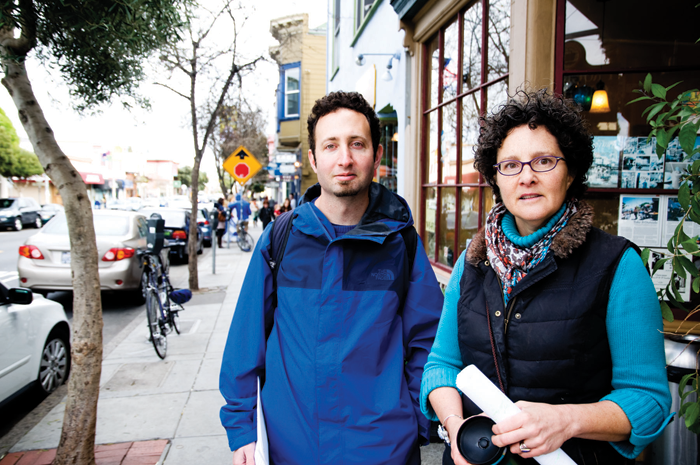 Almost four months after the Occupy Wall Street protests erupted in New York, the Occupy Movement has spread across the country in the shape of encampments, massive protests and civil disobedience.

In the Bay Area, the movement has found new roots in Bernal Heights. Occupy Bernal Heights, whose website says they are a satellite “in support of Occupy Everywhere,” is one of several neighborhood-based groups in the country working on supporting tenants and owners facing foreclosures and evictions in a tangible way.

Occupy Bernal came together as a group comprising Occupy SF participants and members of the Bernal Heights Democratic Club. Buck Bagot, a long-time community organizer with extensive experience working with affordable housing connected with Stardust, an active member of Occupy San Francisco and Annie Sprinkle and her partner, who had both already been looking for ways to work with victims of foreclosure.

Early on, they decided that the foreclosure crisis was the most urgent issue facing their community and they set out to protect neighbors from eviction and foreclosure, and to build a neighborhood-based occupy movement.

Just two weeks after the first Occupy Bernal general assembly meeting, the group managed to secure a meeting with Wells Fargo representatives to present their demands. The foreclosure fighters, loan counselors and community members who comprise the Occupy Bernal group managed to get Wells Fargo to work on postponing and, when possible, preventing auctions and evictions.

Ed Donaldson, a loan counselor for the San Francisco Housing Development Corporation, said that only 13 percent of people who apply for loan modification actually receive it. For the majority of clients who come to him looking for help, his hands are tied.

The newly organized group believes that the next step to help those who are not granted modifications is community pressure, and that’s where Occupy Bernal comes in.
“Jeff,” A neighborhood resident facing foreclosures, who requested not to be named for this article, is involved in the group’s efforts.

“The day before [the organizers knocked on my door] I was thinking, is there anyone out there who really cares?” He said. “I had been talking with loan counselors, lawyers. It all felt like more of an interrogation than help.”

In just over a month, Occupy Bernal worked to identify the 88 Bernal households in foreclosure, meeting many of them, and involving some directly in efforts to save their homes. As a result of these efforts, District 9 supervisor David Campos agreed to support the initiative and granted the members a meeting with one of Wells Fargo’s top governmental affairs officers and their senior vice president with responsibility for foreclosures on the West coast.

Members went with representatives from Occupy Bernal and the residents facing foreclosure told their stories.

Grace Martinez from ACCE both spoke on her experiences working with victims of foreclosure and said that 20 percent of homes in California are facing foreclosure or bankruptcy.

From 2008 to the end of 2011, 12,055 homes in San Francisco have been in foreclosure, and half of those are in districts 10 and 11. More importantly, these cases generally share certain characteristics, such as race, disability status, being single mothers, or belonging to other underserved populations, and people with bad credit.

The group is looking to decide on how to proceed with the other 75 non-Wells foreclosures on Bernal. This past weekend, 19 members went door-to-door to speak with them. Occupy continues to work to fight foreclosures, and all involved say this is just the beginning.

You can learn more online, at occupybernal.org, or at upcoming meetings. The housing and foreclosure working group will be meeting at 7p.m. on Wednesday, Jan. 18 at the Bernal Heights Neighborhood Center (515 Cortland Ave.). The next General Assembly will be on Monday, Jan. 23 at 7 p.m., also at the BHNC. The group is planning a protest at the Bank of America on Mission and 19th streets as part of the larger day-long mass occupation by Occupy Wall St. West planned for Jan. 20.