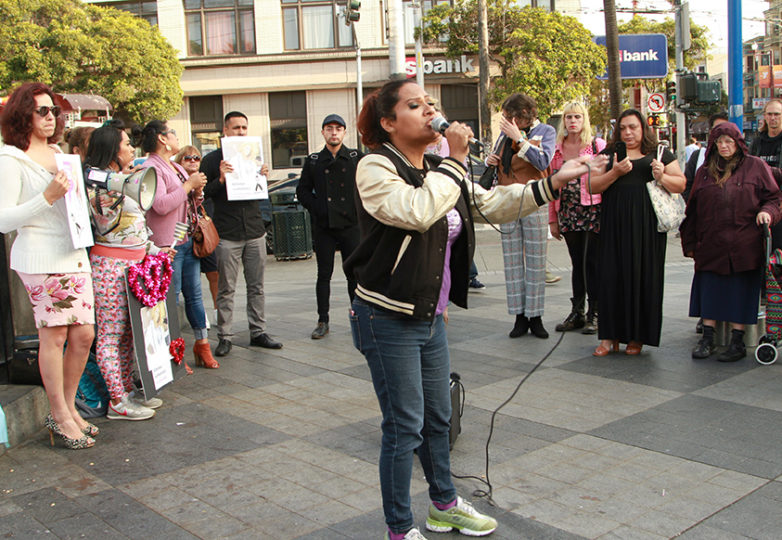 Ella Para TransLatinas Outreach Coordinator Sthefany Galante speaks on the tragedies and hate crimes that occur to trans women of color and the need for people to unite in order for there to be change June 6, 2018 in the Mission District of San Francisco. Photo: Estivaly Moreno 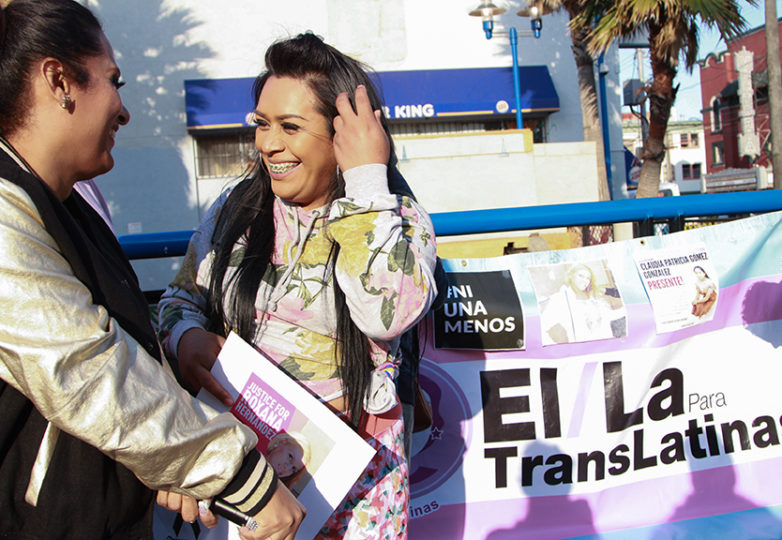 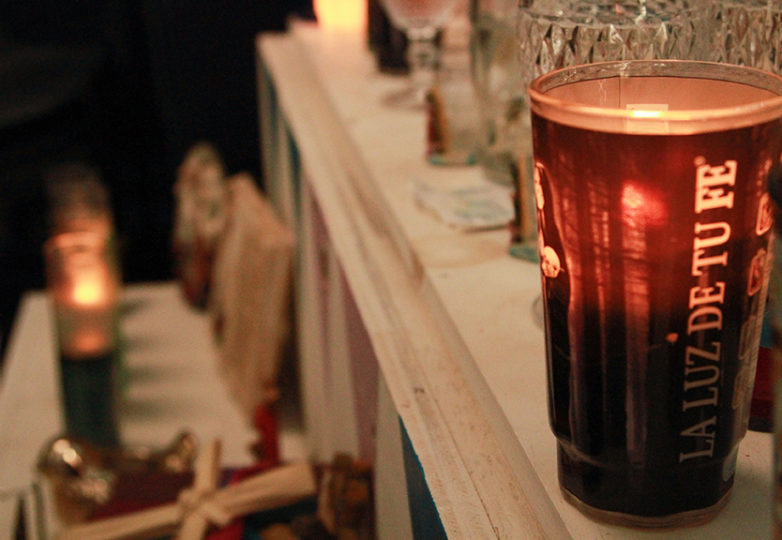 A candle in the altar at El/La Para TransLatinas commemorating LGBTQ people who have passed reads “La Luz de Tu Fe” (the light of your faith). Photo: Estivaly Moreno 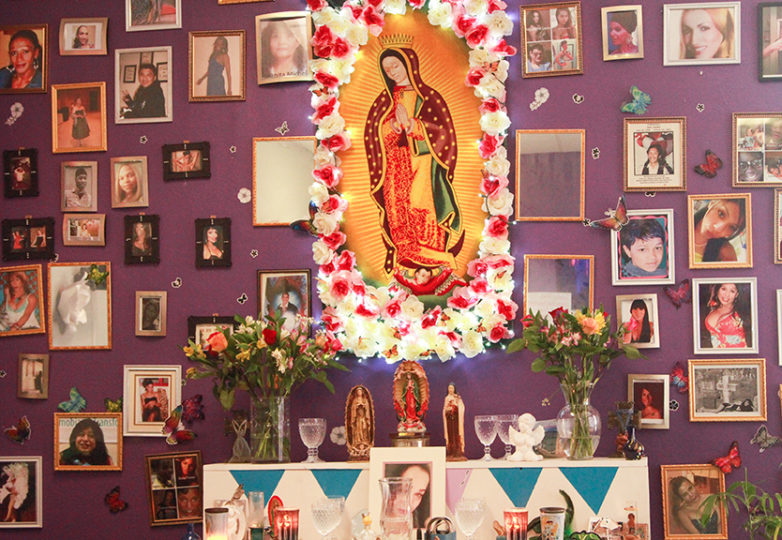 An altar made by El/La para Translatinas in commemoration of the trans men and women who have passed. Photo: Estivaly Moren

The death of an undocumented transgender woman—who died in custody of U.S. Immigration and Customs Enforcement (ICE) on May 25—illustrates the cruel and often forgotten journey that many trans people endure while seeking asylum in the United States.

On June 6, human rights activists, community leaders and concerned members of the community held a vigil at the corner of Mission and 16th streets in honor of Roxana Hernandez, the 33-year-old trans woman from Honduras who died due to medical negligence while in ICE custody.

El/La Para TransLatinas, a nonprofit that provides resources and help for the trans community in San Francisco, organized the event to rally support from the community and to raise awareness about the similar struggles that trans Latinas and undocumented people face. Along with honoring Roxana, the organization also paid tribute to Claudia Patricia Gomez, the young Guatemalan woman who was fatally shot in the head by border patrol agents on May 23 while attempting to enter the country.

At the vigil, Hernandez’s picture was centered in front of a shrine surrounded by candles and many other pictures that covered an entire wall. The pictures—according to El/La volunteer Jane Cordova—were of other transgender women who either had died from a hate crime or of lack of medical attention.

The National Center for Transgender Equality (NCTE)—the nation’s leading social justice advocacy organization—reported in 2014 that 15,000 to 50,000 transgender, undocumented adults lived in the United States, many having fled here to escape violence in their home countries.

“The death of Roxana is felt here because she was a part of our community, she was one of our sisters,” said Cordova. “Not only because she is trans, but also because she was another undocumented woman trying to escape the deadly discrimination of her country. Many of us here have done that journey.”

Cordova also explained that the demonstration, which took place after the vigil, was to show the trans community in a positive light.

“Roxana Hernandez—Presente!” was one of the slogans during the demonstration. It wasn’t only  used to rally people to the demonstration, but also as a way for the trans community to tell the Mission District, a densely Latino populated neighborhood, that they too are “present,” and also suffer the wrath of the current immigrations laws.

“The media portrays us so negatively, but we’re human beings wanting people to know that we exist and that we are also fighting the same fight for the same rights,” said Cordova. “Like healthcare and citizenship, which are hard to get just being trans and even harder because we are immigrants.”

Johana Ramirez, who has been a trans rights activist for the past 15 years, said she felt the need to come and participate in the demonstration, because she saw herself in Hernandez.

“I also came to the U.S to escape violence, all of the deaths [involving the trans community] in Central America are always forgotten and never investigated,” said Ramirez.

Ramirez is one of the lucky ones. She came to the United States seeking asylum from the violence in her home country, and it was granted to her. Ramirez fled from El Salvador to Guatemala, because people in her country tried to assassinate her for being visibly trans. Eventually, she also had to flee Guatemala because of the same reason.

“It [is] worse over there. There is even less support groups [and] resources given to us,” said Ramirez.

Honey Mahogany, a trans rights activist, believes that the reason why the murders of so many trans women get no attention or justice is because people blame the victim for her life choices.

“A lot of blame gets put on the people that get murdered, especially trans people of color, because of the blatant transphobia that occurs within our communities,” said Mahogany. “Often the justification of their murders is that trans women seduce and manipulate men into thinking they were women. That makes it sound that we are at fault or liable and deserved to die.”

Mahogany says the only way to stop the killing of trans people is with education and accurate representation by the media.

“People need to see that we all are contributing members of society, and that we deserve all the rights that everyone receives and when are denied those rights, the community should help and support our fight,” said Mahogany.

Mahogany, a Black transgender woman, also came to show solidarity to support other people in of color.

“There’s a lot of division amongst people of color, especially in the LGBT community. We’re often pitted against each other,” said Mahogany. “But again, I always tell everyone we are much stronger when we work together.”

Hernandez’s death was attributed to medical negligence. She was HIV positive and did not receive proper treatment. According to NCTE’s Health Data from the National Transgender Discrimination Survey, “undocumented transgender respondents experienced physical assault in a medical setting at twice the rate of the overall sample (4% vs. 2%).”

Upon learning the way Hernandez died, Mahogany acknowledged her own privilege of being able to access healthcare, and reflects on how her fellow trans Latina undocumented sisters don’t have access.

“A lot of our healthcare is definitely underfunded as it is,” said Mahogany. “I also think a lot of doctors are fairly ignorant when it comes to trans healthcare, so it puts a lot of pressure on the individual to educate themselves. Who would then educate their doctors and again, this education I assume would be even more hard for undocumented people to receive.”

During the demonstration, Christopher Lopez, a Honduran community member, said he wanted to use his male privilege and speak on toxic masculinity, which he believes is causing these women to flee their countries in the first place.

“You hear the transphobia in your families and your neighborhoods, but no one corrects or even acknowledges this behavior,” said Lopez. “Yes we have to make the U.S. accountable for the mistreatment of our trans sisters here, but we also have to keep our homelands, governments and our communities accountable of the hypermasculinity that is murdering these women.”

Lopez also took issue with the lack of respect from media when covering the killing of trans women.

“Roxana died on Friday, May 25, but her story wasn’t reported until the following Tuesday by Buzzfeed. That alone says how much as a society we prioritize the lives of these women and this has to stop.”

El/La Para TransLatinas encourages transgender individuals, especially those who come from Spanish speaking countries who need translators, resources and community, to seek help at their organization located at 2940 16th St. in San Francisco.