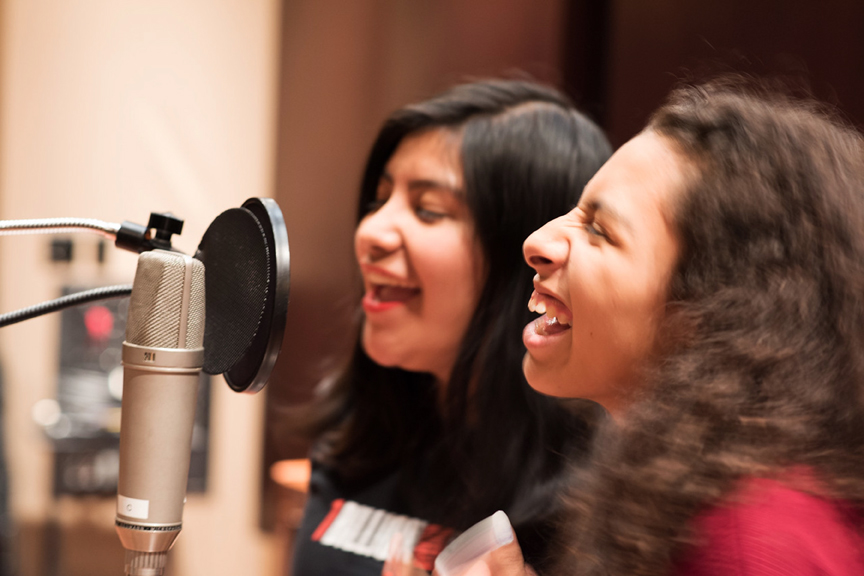 Editor’s note: The following story is part of San Francisco State University’s Journalism 575 Community Media class. Students under the guidance of journalism professor Jon Funabiki embarked on the “Kids of the Mission” project, where numerous organizations, businesses and programs were profiled.

What do the music videos for Beyonce’s “Crazy in Love,” Christina Aguilera’s “Dirrty” and Britney Spears’ “Baby One More Time” have in common? They all show scantily clad women dancing in sexually provocative ways for the entertainment of the masses.

While in theory this is something that most people would tend to oppose, many have become desensitized to this sort of imagery and what it says to young women.

Sexualizing female artists in the music industry is nothing new. For as long as there’s been popular music, artists—especially female ones—have been presented as objects of sexual desire.

Whether intentional or accidental, the popularity of a significant number of modern female musicians stems from sex appeal communicated through their appearance and music.

“This is really about youth having a platform for youth to have an authentic voice in music,” said Future Youth Records founder Jason Wall. “[Music] has become about so many other things. It’s a commodity that’s missing that sense of purpose to move our culture forward.”

The project began after one of the Mission girls, Sarahi, was shocked and disappointed to see the overtly sexualized representation of women in the music video for Nicki Minaj’s song, “Anaconda.” After seeing that Sarahi was upset with how women were being shown in popular music, Mission Girls Director Susana Rojas approached Wall about starting a program that would give girls a chance to create music that accurately represents women and their contributions to society.

“For a 10 year old to be able to have that much insight, I felt like, ‘These girls get it,’” Rojas said. “It’s not like they’re just buying everything that’s being said. They’re having questions and saying [they] don’t feel good about what’s being shown, so how can we help these girls share that message to other little girls who have those same thoughts?”

As part of the program, the Mission girls are given the opportunity to write, perform and record their own songs in a state-of-the-art recording studio.

“We chose girls that didn’t have any real music experience,” said Rojas. “They have never been in the studio and they’ve never really wrote a song, but they have a lot to say and really strong opinions.”

With the help of music industry veterans like A-Plus of the influential Bay Area hip-hop group Hieroglyphics and Matt “Doctor” Fink, the former keyboardist for Prince’s backing band, The Revolution, the girls are encouraged to write music that addresses some of the emotions and challenges of being young women growing up in the Mission.

“At the core of what we do, pen and paper is the instrument,” said Wall. “It’s amazing to watch these young women work, [who] have lots of different things going on in their lives both good and bad. It’s amazing the sense of power those young women feel even though they struggle with school, family or whatever it may be.”

Wall and Fink see the VINYL program as a way to help young girls cultivate self-worth and learn to constructively express their feelings.

“[This program] helps to give them a creative outlet that they see [as] being successful,” said Fink. “It emboldens them and gives them confidence to move forward in their lives in a positive way.”

Though the program is these girls first experience playing and performing music, they were comfortable in the studio, their inexperience did not stop them from actively voicing their thoughts on what would make them sound best on record.

“There was a certain amount of nervousness, no question,” Fink said. “[But] once they were allowed to run free with the lyrical end of it and do their thing, they relaxed and we didn’t put any pressure on them.”

VINYL has been a major success. The Mission Girls released their first song, “We Are The Women,” and premiered the song’s music video at Brava Theater Center in 2015.

Along with the overwhelming positive reception to their song, Rojas cites another major accomplishment of the program: They created a space for the young girls to get out of their comfort zones and contribute something they can be truly proud of to their community in the Mission.

“Eliseana, the singer in the project, really stands out to me because she was the quietest when she came into the project,” said Rojas. “ If you were to meet her now and compare her to when she first started, she fully embraces that she’s unique. She has no problem talking to people and I think that’s an amazing skill for a 13 year old going into high school, to have that confidence.”

In light of the success of the program, the mentors at Future Youth Records are excited to continue working with the Mission Neighborhood Center and hope to expand VINYL program to other cities and youth groups all over the country.

“The whole plan from the beginning was to work in other cities [with our program] and other groups of kids around the country,” Fink said. “We hope to keep expanding the idea and take it to more people.”