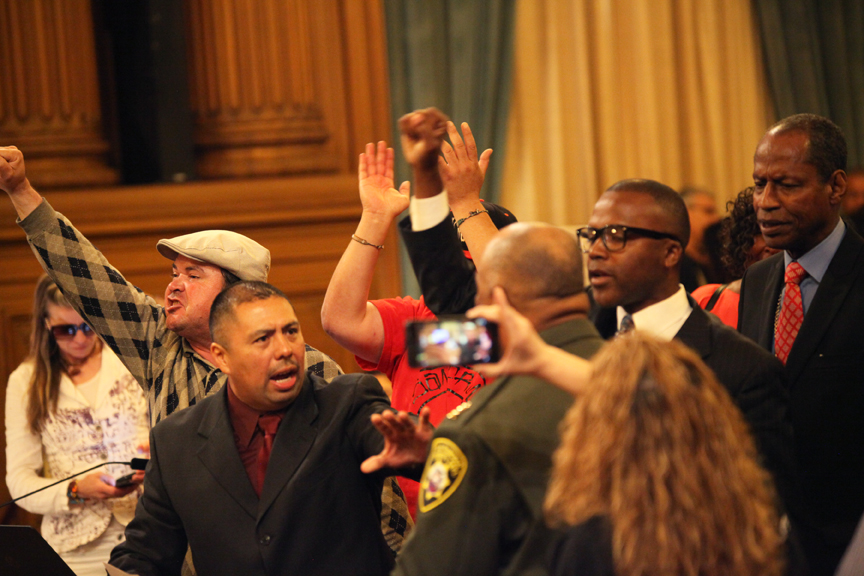 A San Francisco awards ceremony meant to recognize activists and their fights for justice quickly turned heated on July 28, as several of those being recognized passionately refused to accept their awards.

Dozens of attendees crammed into the legislative chamber at City Hall for the Human Rights Commission’s 2016 Hero Awards, which are given annually to students, individuals and organizations. Several of the organizations being awarded were representing victims of police violence, such as Idriss Stelley, Alex Nieto, Amilcar Perez-Lopez, Luis Gongora, Mario Woods and Jessica Williams.

“These have been extraordinarily trying times,” said Susan Christian, chair of the Human Rights Commission (HRC) whose Equity Advisory Committee selects nominees for the awards. “There’s been a lot of pain in all of our communities. And we’re here tonight, to acknowledge and to celebrate the role of advocacy for justice.”

That acknowledgment however wasn’t well received by many.

When 20 minutes into the ceremony Christian called on the Justice 4 Mario Woods Coalition to receive its award, member Daniel Muhammad interrupted the proceedings, informing the commission that the coalition was rejecting the award.

Christian asked Muhammad to wait for the public comment segment of the ceremony to speak, after all of the awards had been presented, but he continued:

“Madam chair, we want justice. The Human Rights Commission has not taken a stand for justice. This award is a black eye for San Francisco.”

Surrounded by community members from other justice coalitions, Muhammad took the opportunity to demand that the HRC send letters to U.S. Attorney General Loretta Lynch and California Attorney General Kamala Harris to investigate the practices of the SFPD.

“If you want to award us,” shouted Muhammad, “stand with us for justice.”

Muhammad’s speech halted the ceremony as several of those, who had already accepted awards, now rejected them. La Mesha Irizarry, who founded the Idriss Stelley Foundation, after her son was killed by SFPD in 2001, tore apart her award in front of the commission. So did UCSF doctor Rupa Marya of the Do No Harm Coalition, which treated the “Frisco 5” during their hunger strike. Benjamin Bac Sierra took the award given to the organization Amor for Alex Nieto and smashed it on the chamber floor, riling up the crowd and causing sheriff’s deputies to intervene.

“I appreciate and respect everything that has been said here,” Davis said. “I also want to be respectful of the people who are not on the commission, who made these recommendations [for who should receive awards], who actually fought the system on your behalf.  We can all do better, but I also want to make sure that we don’t violate other people’s rights while we advocate for our own.”

After attempts to resume the ceremony failed, the meeting officially adjourned, but those interested in public comment were allowed to speak.

Richard Smith, vicar at the Episcopal Church of St. John the Evangelist and one of the most outspoken members of Justice 4 Amilcar Perez-Lopez, was one of those who returned the award, following the lead of the Elvira and Refugio Nieto, parents of Alex Nieto.

“We’re all so tired of what we’re seeing. It just keeps breaking our heart … They tell us, ‘It’s going to get better. We’re not Ferguson. Reforms are on the way.’ And then one more person gets killed,” Smith said.

Other family members of the deceased also took issue with the awards.

“I don’t have anything personal against the commissioners of the HRC, but how are they going to award a trophy, a prize to the families whose children have been killed? It’s extremely insulting,” Irizarry said.

Family members of Luis Gongora, a homeless man who was killed by SFPD in April, felt the same.

“This is an insult to the family …  for them to say, ‘We’ll give you a trophy put in your home because we killed your family member,” Gongora’s cousin, Luis Poot, said.

Smith, who has called publicly for charges to be filed against the officers who fatally shot Amilcar Perez-Lopez in the back in February of 2015, believes that pressuring the HRC to take a stand can make a difference.

“[San Francisco District Attorney George Gascón] is attuned to public pressure, if they [HRC] started calling him and telling him, ‘Do the right thing, you must file murder charges,’ he would have to listen to that,” Smith said. “That’s precisely what a Human Rights Commission needs to do.”

Not everyone in attendance was pleased with how the ceremony was adjourned.

“I’m very proud of my colleagues and of what we’ve achieved the last few years. To receive acknowledgment from the Human Rights Commission, that’s incredible,” Velazquez said. “I’m pissed. Here we are celebrating people who have actually tried to make a difference in the community, and this group of individuals decided to hijack the platform for themselves. They have no idea what a disservice they’re doing to their own cause. You cannot achieve justice by trampling on the rights of other people.”

The day concluded with attendees hanging a banner and creating an altar on the steps of City Hall, to remember those killed by police.