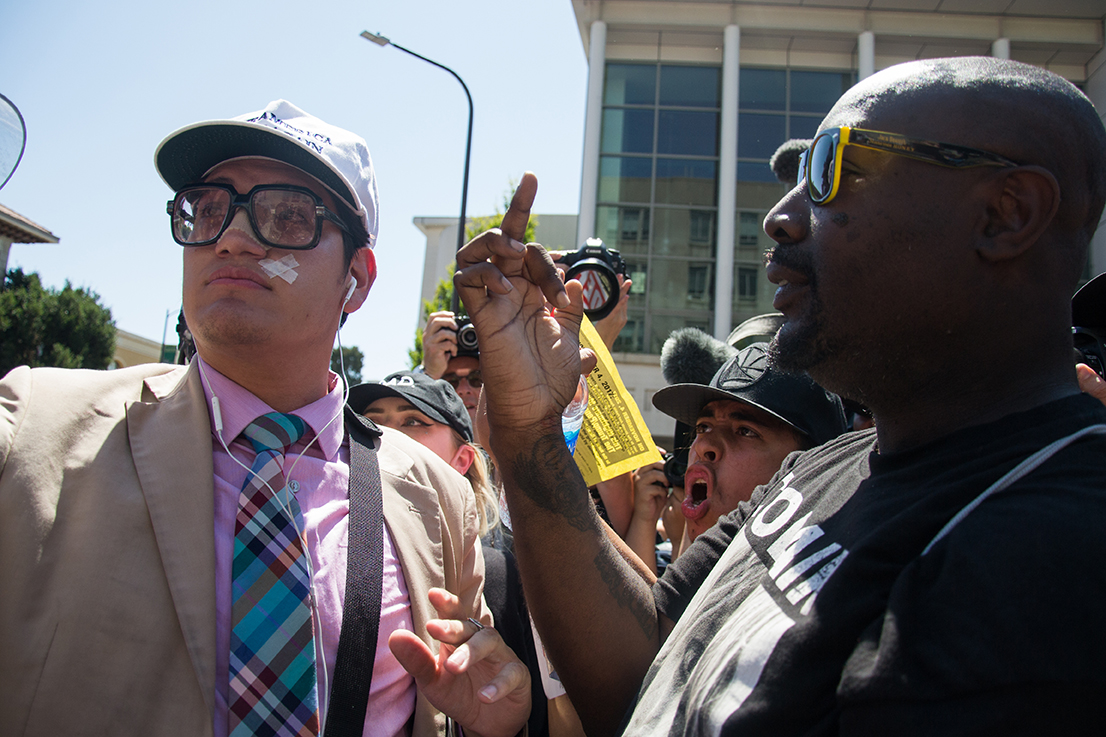 Despite the cancellation of two far-right demonstrations, which were set to take place over the weekend of Aug. 26-27 in San Francisco and Berkeley, thousands of passionate counter-protesters came out in force to oppose the presence and ideology of the far-right.

The two events—the first hosted Joey Gibson of “Patriot Prayer” in San Francisco’s Crissy Field on Aug. 26, and the other by “Patriot Prayer” affiliate Amber Cummings in Berkeley on Aug. 27—came under extreme scrutiny by local politicians and community members, given the recent events in Charlottesville.

Thousands of community members, inter-faith leaders and anti-hate activists, claimed victory on Sunday, Aug. 27 in Berkeley after the planned “No to Marxism in America” event that was supposed to be held at Martin Luther King Jr. Civic Center Park failed to materialize.

On Aug. 24, Deputy City Manager Jovan Grogan denied the permit request for the rally, citing a failure by event organizer Amber Cummings (dubbed a “transsexual patriot” by some on the right) to include the required information about security and emergency medical service arrangements.

But the anti-Marxist rally continued to gain steam on alt-right social media sites, with several right wing groups such as “Patriot Prayer” vowing to make an appearance in Berkeley on Sunday.

Berkeley Mayor Jesse Arreguin advised the public to avoid the park on Sunday. “The best way to silence the white nationalists is by turning your back on their message,” read a statement from the mayor’s office.

But anticipating a clash between anti-hate demonstrators and alt-right sympathizers, the city of Berkeley deployed officers in full riot gear.

Ultimately, only a dozen of those who planned attend Cummings’ event approached the park throughout the day. They were met by a horde of counter-demonstrators, swelling to as many as 4,000.

Physical confrontations were promptly broken up by Berkeley police, who protected the anti-Marxist event, shielding it and escorting it out of the park.

Around mid-day, participants in a second protest, the Rally Against Hate, which began at U.C. Berkeley’s Crescent Lawn earlier that morning, joined the demonstrations at MLK Civic Center Park.

The mostly peaceful Rally Against Hate was joined by about 200 demonstrators from antifa also known as “black block.”

Clad in black with faces covered, and armed with shields, the antifa contingent climbed over boundaries that had been set up by Berkeley police, bypassing checkpoints meant to keep weapons from the demonstration area.

After antifa arrived, several Trump supporters were assaulted. In one instance, four black bloc members were stomping and beating a demonstrator, and only stopped when Reveal reporter Al Letson (who is black) got in front of the group, shielding the demonstrator from further harm.

Joey Gibson, the organizer of Patriot Prayer, made a brief appearance while the demonstration was at its peak. He approached the crowd accompanied by at least one of his allies, who was clad in shoulder pads. Antifa promptly attacked with mace and sticks. Gibson then fled towards an area with heavy police presence and voluntarily placed his hands behind his back, police used zip ties to detain him. (Berkeley police later clarified that Gibson was not arrested, but temporarily detained for his own protection.)

In total about 15 arrests were made, mostly for offenses related to bringing forbidden items into the area enclosed by the city of Berkeley.

The demonstration brought people from across the Bay Area and the political spectrum.  It was overwhelmingly peaceful, aside from a few incidents, with attendees singing the “We Shall Not Be Moved” spiritual and chanting “Black Lives Matter.”

Squiggy Rubio, who came to rally against White supremacy was glad that “everybody came out and overwhelmed the neo-Nazis, White nationalist by showing them that they are outnumbered.”

Lily Fahsi-Haskell of Oakland said she feels it’s the community’s duty to show up “anywhere where fascists try to continue to spread fear, hatred and oppression, particularly against people of color, queer people, and women.”

A day earlier, a similar scene had played out, with large crowds in San Francisco, leading to the cancellation of the event planned at Crissy Field.

In the lead up to the event, it was uncertain whether the National Park Service would grant the conservative group the permit for its “Free Speech” rally. The permit was eventually granted despite opposition from many including Mayor Ed Lee, House Minority Leader Nancy Pelosi, Sen. Scott Wiener.

But Gibson cancelled the event the day before, saying he would instead hold a news conference at Alamo Square. But without the proper permits, Gibson was unable to use Alamo Square, and decided hold the conference in Pacifica.

“Right now, we had to cancel the rally,” Gibson told reporters via video stream from a remote location in Pacifica. “We all decided together it was the best thing to do for the city, because the way it was set up is that a lot of innocent people were going to get hurt—that’s a fact. A bunch of supporters, a bunch of ANTIFA communists, normal liberals would have all been mixed together, it would have been a huge riot and it would have been a disaster.”

Thousands of peaceful protesters surrounded Alamo Square Park as police blocked off streets for safety precautions. Eventually, the counter-protesters marched toward the Mission chanting, “We say it loud, we say it clear, fascists are not welcome here” and other chants.

“People came out today to stand against Patriot Prayer and their rally for White supremacy,” said Shane, a man wearing a burgundy bandana over his face. “We came out to stand against events that happened—like in Charlottesville, like in Boston—and to show that we as a community are stronger than hatred.”

According to the San Francisco Examiner, Gibson and Patriot Prayer eventually made their way to Crissy Field at around 4 p.m., but were met by a man carrying two bullhorns, who drowned out Gibson’s speech. An hour later, Gibson drove off.

Saturday’s protests embodied the diversity San Francisco prides itself on, with people from every walk of life, race and background coming together to defend their shared beliefs.