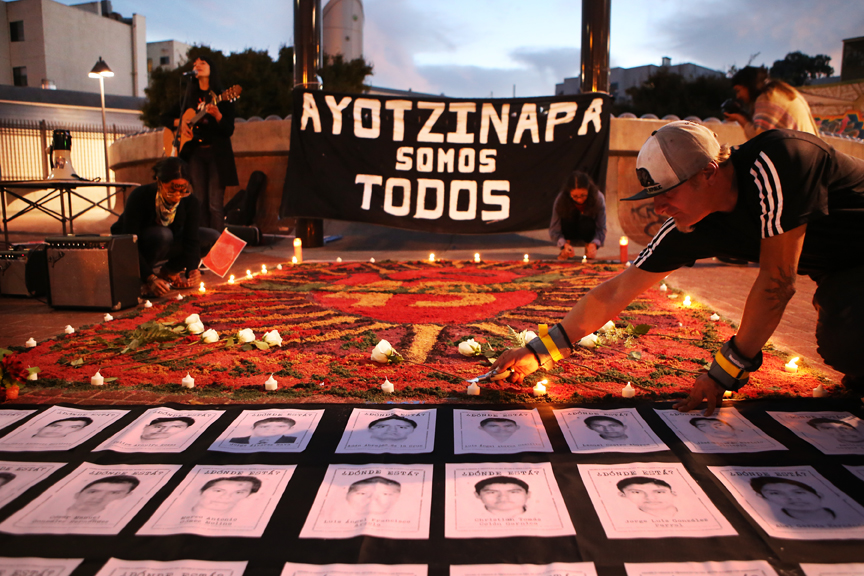 A year after the disappearance of the 43 students of Ayotzinapa’s Raúl Isidro Burgos teachers college, San Francisco activists marched through the streets of the Mission District to remember and to demand justice for the casualties of criminal violence in Mexico.

The Sept. 26 “March for Justice and Indignation”— initiated by the San Francisco State University and City College of San Francisco chapters of M.E.Ch.A., the ANSWER Coalition and Mujeres Unidas y Activas among others—proceeded out of 24th Street BART station where activists gathered to voice their discontent with the Mexican government for failing to clarify the truth about the whereabouts of the students.

“What happens in Mexico regarding repressions and social movements is a daily bread,” said Norma Garcia, psychotherapist, activist, who is originally from Colima, Mexico. “I always believed and I always thought that the [Mexican] army took them [the students].”

Garcia explained that the demonstration was in solidarity with other struggles for justice that were being held in Mexico and around the world for the “Day of Indignation,” and to raise general awareness and to call for action.

“How many more years will pass in Mexico for them to open their eyes,” said Francisco Silva, an activist who claimed to have witnessed electoral fraud by the ruling Institutional Revolutionary Party (PRI) in previous elections.

During the demonstration, activists took turns discussing the problems facing Mexican society and also addressed issues such as discrimination and violence against immigrants and people of color in the United States.

“There are many similarities [to the U.S.] with police brutality and political repression in Mexico,” Garcia said.

After reading the 43 names of the missing students, demonstrators marched to the 16th Street BART plaza, where the band Trio Cambio performed its song “We are 43,” concluding the demonstration.

The long night of Ayotzinapa
Sept. 26, 2014 marked a dark milestone in Mexico’s history.

That night, five buses carrying about 100 students from Ayotzinapa to Mexico City for a protest against then mayor of Iguala, Jose Luis Abarca, were intercepted by state police in Iguala on Abarca’s orders. During a violent quarrel, three students and three pedestrians were killed. There were 57 students who were allegedly taken into police custody; 14 were found in the coming days, and 43 were missing.

According to the Mexican government’s version of events, the 43 students were handed over to the Guerrero Unidos Cartel, who executed and burned them in a mass grave in Cocula.

Soon after, Abarca was arrested with his wife, Maria de los Angeles Pineda, on charges of murder and organized crime. Also captured was Gildardo López Astudillo, boss of the Guerrero Unidos Cartel, who claimed he sent orders to “burn” the students.

So far, only the confirmed remains of student’s Alexander Mora Venancio and Jhosivani Guerrero de la Cruz have been found. Also 60 other mass graves not related to the case, were found.

The Mexican government’s investigation and its version of events have been denounced by the students’ families and by Inter-American Commission on Human Rights as being full of inconsistencies.

Despite political instability and high rates of violence in his country, Mexican President Enrique Peña Nieto attended the United Nations General Assembly on Sept. 28, where he highlighted his government’s commitment to human rights and peace.

“They don’t say if they’re dead or not—pure deceit,” said Ana Nunez, a merchant from Honduras who saw the demonstration pass in front of her gift shop in the Mission. “I prefer a dead son, in his grave, so I could mourn him.”

Neither pardon nor forgiveness