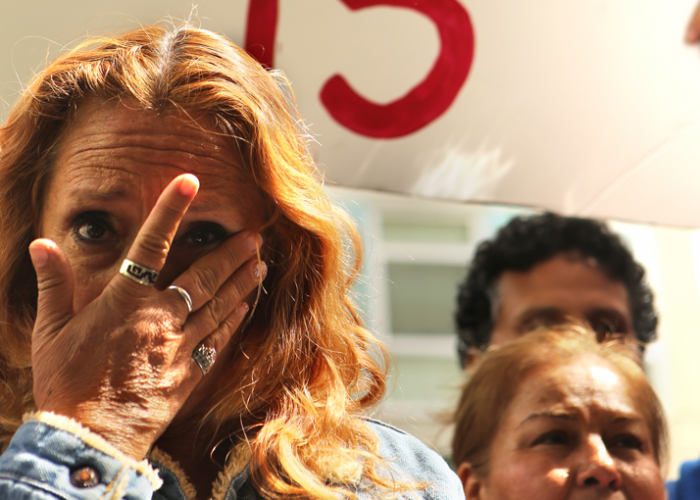 Fernanda Nielsen wipes a tear off her face Monday April 6 at a rally outside the Mexican Consulate in San Francisco to demand justice for the 43 college students that disappeared in Iguala, Guerrero, Mexico on September 26, 2014. Photo Joel Angel Juárez 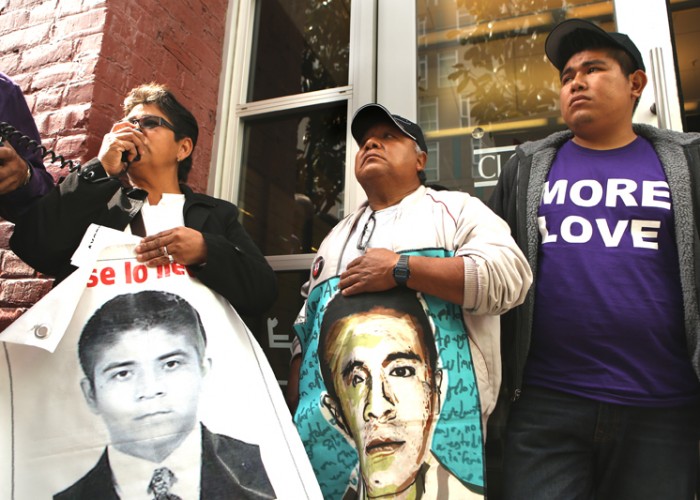 Angel Mendoza Sacarias, and Angel Neri De La Cruz (right), a student at Raúl Isidro Burgos Rural Teachers’ College of Ayotzinapa who escaped the mass kidnapping, stand by her side at a rally outside the Mexican Consulate in San Francisco on Monday April 6, demanding justice for the 43 college students that disappeared in Iguala, Guerrero, Mexico on September 26, 2014. Photo Joel Angel Juárez 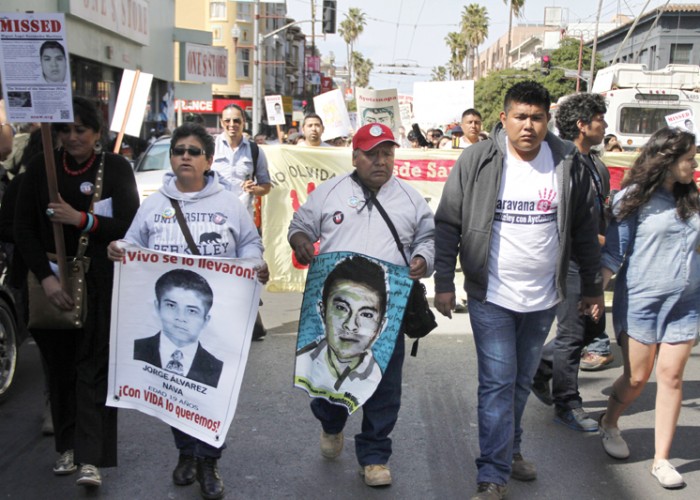 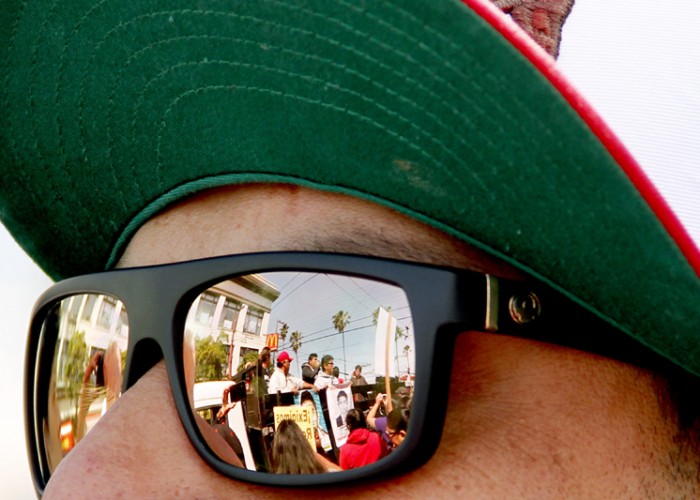 Protester at a rally demanding justice for the 43 students who disappeared from Ayotzinapa, México, on September 26, 2014. Photo Angelica Ekeke 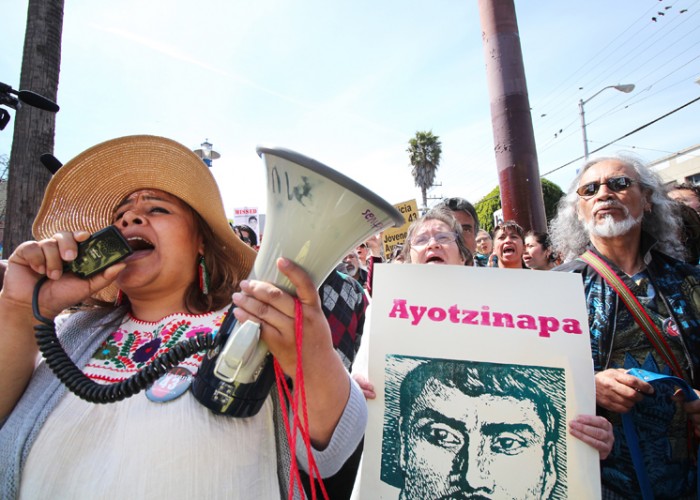 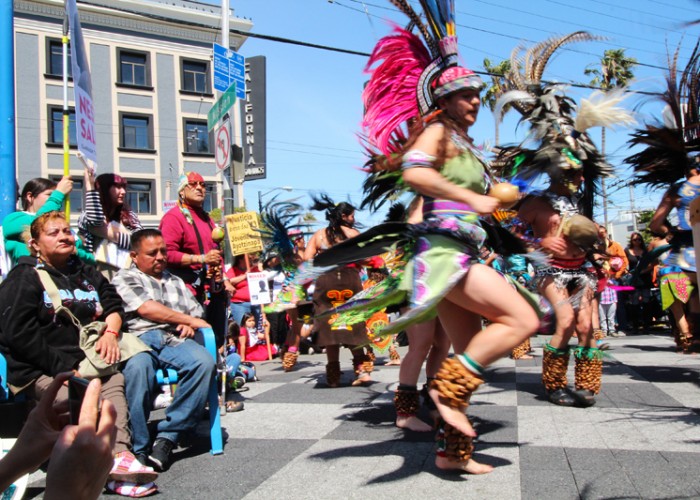 Dozens gathered at the 16th Street BART plaza on Saturday, April 4, rallying in support for the missing 43 students from Ayotzinapa in Guerrero, Mexico.

After an hour filled with speeches, sign picketing, and Aztec dancing, demonstrators marched from 16th and Mission streets to Buena Vista Horace Mann elementary school, where some of the missing students’ loved ones spoke of their anguish and frustration with the unsolved kidnappings.

On their way to Iguala, the students were ambushed by local police and allegedly taken into custody by “Guerreros Unidos” gang members, where they were presumably killed. Mexican authorities arrested the former mayor and his wife in Mexico City in November 2014, and according to Mexico Attorney General Jesus Murillo Karam the couple have been formally charged with orchestrating the kidnapping.

This event triggered the resignation of Guerrero’s governor, Ángel Aguirre Rivero, and international outrage over government corruption and police brutality.

Caravana 43, an activist organization in the United States, coordinated three caravans to call attention to justice for the 43 missing students and plead with the government to reconsider its military aid to Mexico.

“The last few months, I’ve been feeling sad for not knowing where my son is,” said Blanca Luz Nava Vélez. “[In Mexico] we don’t have a media that supports us or that tells the truth. That’s why we are here. So that hopefully we have the support of the media from here [United States]”

The rally raised about $3,000 to help aid the Caravana 43’s tour around the United States.

Mendoza said that their first priority is finding the students.

“We’ve been searching for six months from one place to the other,” Mendoza said, “planning what we are going to do to find our kids and to get the word out there.”

The families of the students expressed their disappointment with the Mexican government’s lack of support in the search. Several politicians including President Enrique Peña Nieto promised to help retrieve the students, and yet nothing has been done, according to Mendoza.

Art and dance and resistance
The April 4 event started with an Aztec traditional dance as the crisp air filled with the smell burning sage.

“This [dance] is a form of resistance,” said Niña Rodriguez. “It’s a form of prayer and blessing for the 43 students. Through dance, we are praying that they’re okay and they’re alive.”

Jovani Rodriguez, an artist, held two large painted sheets, with the help of a few friends.

“I went through something similar that the families went through in 2006 in the city of Oaxaca where I am from,” Rodriguez said. “There was a revolt to impeach the governor in our state where I became really involved with activism work. Since sometimes violence, fists and sticks don’t have an effect … I thought why not create art and let it have a greater effect on people.”

Jovani’s first piece, titled “México Secuestrado” or “Mexico is Kidnapped,” illustrated a person blindfolded and gagged. His second piece,
“Ayotzinapa ¡Lucio Vive!,” was a detailed portrait of one of the students.

“We are here to express our complete solidarity of the people of Ayotzinapa because every one of those students was a hero,” said Joey Johnson, an organizer with the Stop Mass Incarceration Network. “We want them all back alive.”

“Ayotzinapa was the last straw because just like the mass murders and missing people of Mexico and the femicides in Juarez, people are mobilizing in trying to do something about it,” said CCSF student and M.E.C.H.A member Itzel Calvo.

Caravana 43 will continue its tour through Pacific Coast cities and across the nation to spread the word, find answers and seek the justice the students deserve.

“What we want is for people to be conscious about what is happening and to see that it is wrong and to react,” Vélez said. “We can’t stay the way we are and allow the government to oppress us whenever they want. It needs to stop.”

Slain Mexican journalist did not die in vain