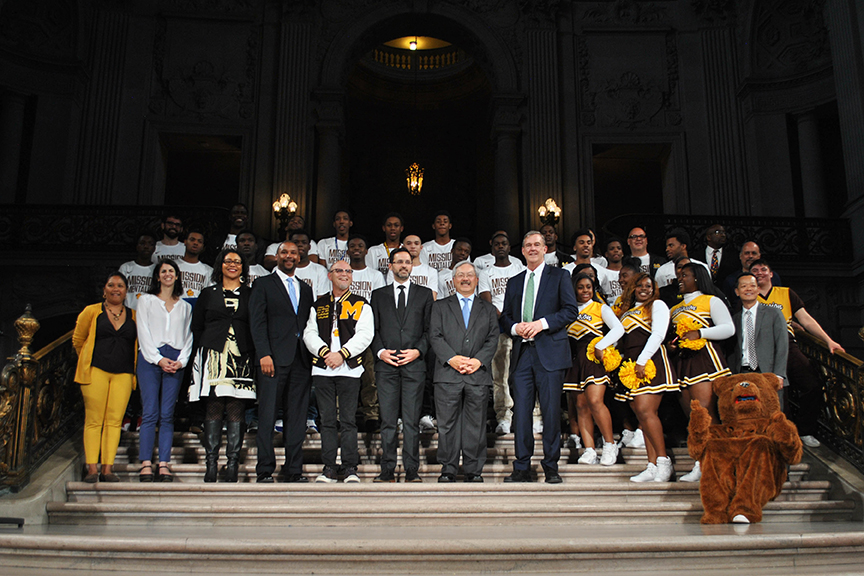 May 1st: A Day Without Immigrants!

Winning it all is what every coach dreams of—leading a team to victory, breaking records, making history. But for Arnold Zelaya, coach of the state champion Mission High School Bears, it’s much more than that. It’s about dedicating his time, effort, passion and love to his basketball team, and if they happen to win something along the way, so much the better.

On March 24, Zelaya and his team defeated the Villa Park Spartans at the Golden 1 Center in the Boys Division III Championship game. Mission High made history by becoming the first public school in San Francisco ever to win a state championship.

Amid all of the euphoric celebrations since then, coach Zelaya has sat quietly in the background enjoying the happiness he sees in his team.

“He means a lot to me, we’ve been through thick and thin,” Jayden Fosten, one of the team’s captains, said of Zelaya. “Coming out with a state championship, it’s a blessing. I look at him as another father figure. ”

Zelaya, 48, was born and raised in San Francisco. The Salvadoran-American coach recalls his own high school days and that he actually played football, not basketball.

Coaching is an art that has come naturally to Zelaya. When he was 23, Zelaya was already coaching soccer, baseball and basketball, but as he said at the team’s victory ceremony at San Francisco City Hall on April 12, “Basketball was what really brought out this joy in me and it turned out I was pretty good at it.”

Prior to coaching at Mission High, Zelaya had coached at St. Peter’s Catholic School where he attended high school as a teenager. He then coached at Thurgood Marshall Academic High School until he was hired to be the dean of students at Mission High 12 years ago. During his first three years there, Zelaya was an assistant coach under then head coach Judson Steele.

Three years after being hired at Mission High, Zelaya took over as Bears head coach after former coach Judson Steele went on to take a position as the liaison to the San Francisco Board of Education.

“We’ve been friends and colleagues for 15 years, I’m part of his family, he’s part of my family,” Mission High Principal Eric Guthertz said of Zelaya. “I love this man, he means the world to me. What he means to the school is that he’s been a rock, he’s been brilliant and he’s tough when he needs to be but he’s really incredible for the program.”
For the San Francisco native, coaching in the Mission District has been an honor and a pleasure, as he continues to dedicate himself to his team and to San Francisco’s youth.

“Yeah, it’s meaningful to be in San Francisco. I’m a native, I’m not leaving despite all of the changes in the city,” Zelaya said. “And when it comes to basketball, it’s an African-American population. Our whole team is African-American, but for me, brown, black doesn’t make a difference … I just see San Francisco.”

After Mayor Ed Lee presented Zelaya and his team of “Grimey Bears” (as they call themselves) with the key to the city of San Francisco, the coach has sat back and let his boys soak in their moment.

“It’s great, I’m really proud. Like I said, I’m a San Franciscan, born and raised in the Mission District,” Zelaya said. “It’s exciting for me, and to see these guys. These guys don’t really get a chance. They’re kids of color and the odds are against them. These guys have something that they can say they did, they dreamed about and did it and hopefully that carries out throughout their lives.”