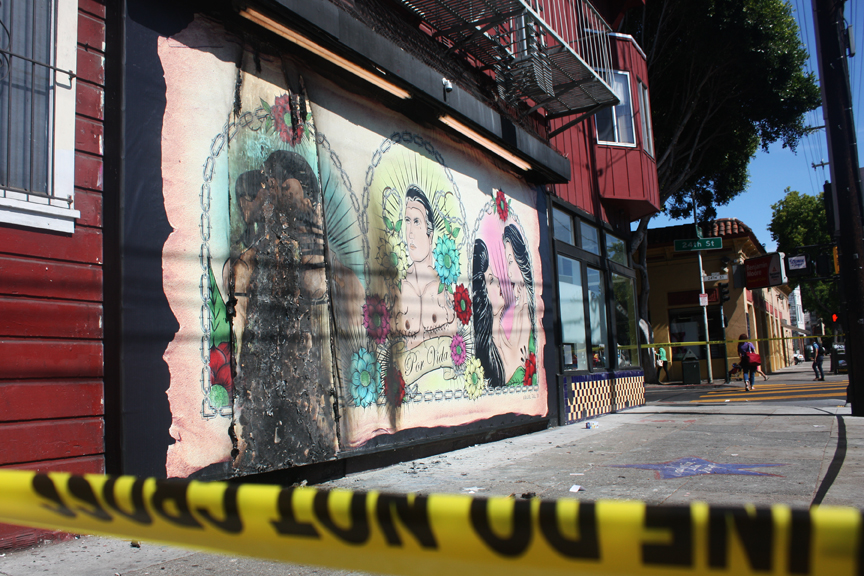 Opponents of the mural—who have expressed their feelings from the comfortable confines of social media, with homophobic threats against the mural and its artists—proclaimed that the work misrepresents Latino, lowrider and “cholo” culture in the Mission as “gay.” Supporters, on the other hand, have declared the piece—which uses lowrider imagery to depict same-sex couples and a transgendered man—a reflection of the queer/Chicano identity, of people who too were raised on a diet of oldies and lowrider art.

With the defacement of the “Por Vida” mural on the morning of June 16, and again (after being repaired) on June 20, Galería announced it was prepared to restore the mural as many times as need be.

Then on June 29 an arsonist was caught on camera destroying the left hand portion of the mural depicting two men embracing each other.

We at El Tecolote condemn this blatant hate speech to say nothing of such reckless vandalism, and we stand ready to support this well-respected Mission-based institution, which has always been at the vanguard, be it in Chicano/Latino art or in the fight for social justice.

Like Galeria, El Tecolote has for 45 years stood for what it believes is right, providing a voice for the voiceless and promoting equality and freedom of expression through art. In 1976-1977, during an era when it was perhaps taboo even to acknowledge the existence of a gay Latino, El Tecolote ran a series of articles that shared information about the Latino gay experience in San Francisco.

“We are also oppressed within our own Latino culture,” wrote Eddie Baca of the Gay Latino Alliance (GALA) in the October 1977 issue of El Tecolote. “The denial that we don’t exist, the rigid roles for men and women that don’t tolerate any person who’s different; politically you’re viewed as going against the Latino cause, you’re up against the honor, dignity and machismo concept in the Latino culture.”

Judging by the slew of homophobic rants and attacks via Instagram and Facebook, the views held by some in our community regarding equal rights have unfortunately progressed very little over the past four decades. We find it disheartening that many of the people who are posting homophobic attacks on social media, also clamor for equal rights for Latinos.

As a newspaper, our position will always be in favor of free speech, especially if it comes from populations historically silenced or marginalized.

We stand by Galería de la Raza and applaud the courage of all who, in the face of hate and threats of violence, hold steadfast to their principles.

The U.S. Supreme Court’s June 26 landmark decision declared that the right to marriage—including same sex marriage—is protected under the 14th amendment—that is, that same-sex couples are guaranteed equal protection under the law.