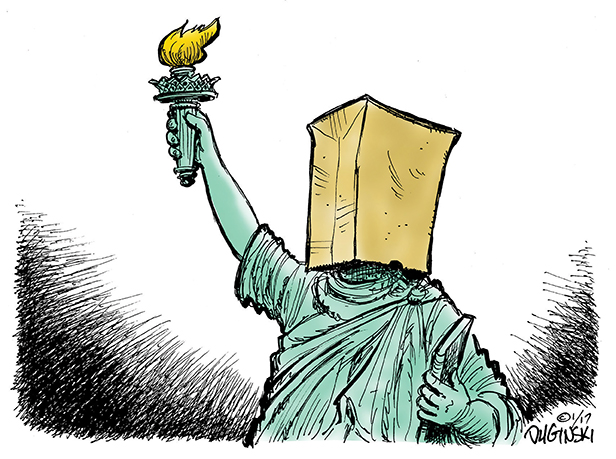 Donald Trump’s belligerent executive order banning most refugees indefinitely, and temporarily banning immigrants from seven majority Islamic countries is not only superfluous, but a violation of our principles and our constitution as well as common decency.

The so-called “Protecting the Nation from Foreign Terrorist Entry into the United States” order was written and executed so sloppily that thousands of students, employees and family members were left stranded in airports around the country over the weekend of Jan. 27-28.

And despite what the name might suggest, it will do little to actually enhance national security in any meaningful way.

For instance,  while immigrants from Iraq, Iran, Syria, Libya, Yemen, Sudan and Somalia are now banned from American soil, immigrants from Saudi Arabia, Egypt and Pakistan are not. Coincidentally, Saudi Arabia and Egypt—the two countries that spawned the 9/11 hijackers—are both places where our president holds business interests.

The order, like most everything else about Donald, is theater—all show and no substance. But that doesn’t mean it won’t have negative and possibly far reaching effects.  One need only look at the ordeal that thousands of travelers were forced to endure during the chaos of Jan. 27-28 to get an idea.

And even more concerning is the precedent, both in terms of what has come before and what might be next. It was 75 years ago this month that Franklin D. Roosevelt signed executive order 9066, which would ultimately pave the way to for the mass incarceration of Japanese Americans.

We at El Tecolote understand that immigrants have literally made America what it is today: a melting pot of peoples, cultures and ideas. Many in our community arrived here as refugees or are the children of refugees. While the anti-immigrant sentiment that our president is casually inciting has a long history in this country, we believe that it has always been counter to the ideals enshrined in the constitution, and is therefore un-American. Thus we categorically reject the president’s order as un-American and we stand by all immigrants wherever they may have come from.