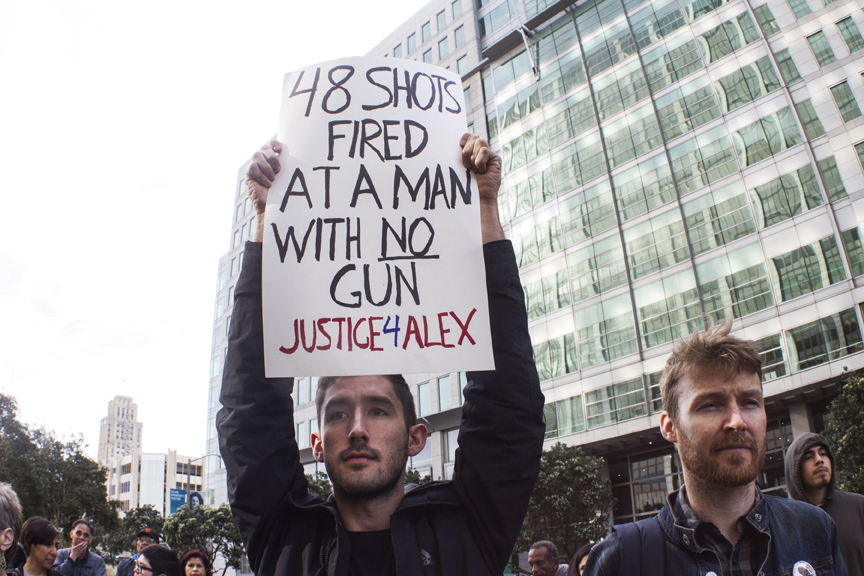 In the hours following the verdict, the one where the four officers who fatally shot Alejandro “Alex” Nieto 59 times were found not to have used excessive force, an angry and heartbroken Refugio Nieto—like many in our community—tried to make sense of it all.

“I’m still thinking about that image,” Refugio said, referring to the one of his son’s body, bloody and broken, with multiple bullet wounds to his face. “One of the damn cops still said that he didn’t know what this young man was made of, that he appeared to be made of steel, because after 59 shots, he was still standing, and pointing [a Taser] at them.”

Most in our community can empathize with Refugio. How could a jury—regardless of its ethnic makeup—reasonably rule that shooting 59 times at a single person isn’t excessive?

However one decides to interpret the dubious timestamp adjustment to Nieto’s Taser, which made it match SFPD’s version of events, or the hand bone fragment found in Nieto’s jacket pocket (which would indicate that his hands were in his pockets at the time he was shot and not pointing a Taser at the police), what’s indisputable is that Lt. Jason Sawyer and officers Richard Schiff, Nathan Chew and Roger Morse engaged in a one-way gun fight with someone who didn’t have a gun.

It’s likewise hard to fathom how four trained officers could fire 59 times at a single person, before realizing that that person had not fired a single shot in return. But the jury apparently was able to.

At the time of his death nearly two years ago, Nieto was hardly the first person of color fatally shot by the SFPD, and sadly he hasn’t been the last. Amilcar Perez-Lopez and Mario Woods have been added to the list of names of those struck down by badge- and gun-wielding members of our city’s law enforcement, whose actions seem to demonstrate that protecting and serving communities of color isn’t a priority.

Over and over we’ve seen SFPD rationalize the actions its officers take—no matter if the person they shoot is black or brown, walking or running away—as being out of fear for their own personal safety.

But, can an officer who shot a man in the back as the man ran away—as two autopsies proved was the case in Perez-Lopez’s death—really be said to have acted out of fear for his own safety? Similarly, can any sane person believe that executing someone by firing squad—as videos from the Woods shooting demonstrate—is actually an act of self-defense?

It doesn’t take a jury to figure out the answer.