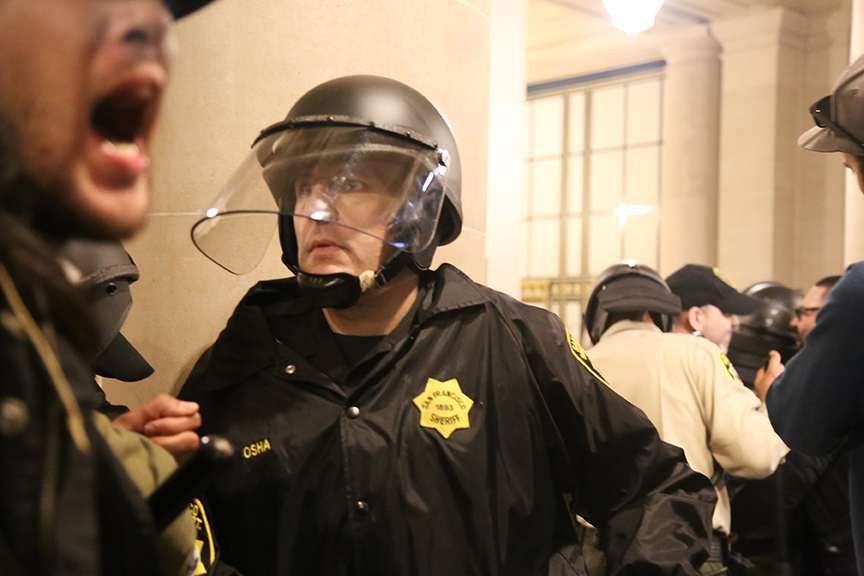 More than a year had passed since Natasha Dangond had been violently shoved and struck on the head by Sheriff Deputy Scott Osha’s baton while photographing a protest at City Hall—the incident captured on video and shared widely on social media. But that didn’t make it any easier when she was informed that her claim that excessive force was used against her was dismissed.

One of four journalists who filed complaints after being roughed up by San Francisco Sheriff’s Deputies at City Hall while covering a protest on May 6, 2016, Dangond received a letter from the Office of the Sheriff that read: “After a full review of the case, the allegation against the staff member was not sustained.”

The same letter was sent to El Tecolote photographers Gabriella Angotti-Jones and Joel Angel Juárez, and 48Hills reporter Sana Saleem. Visibly wearing their press credentials, Angotti-Jones was grabbed and dragged by deputies, while Juárez was shoved down a short set of marble steps. And while we at El Tecolote weren’t surprised by the Sheriff’s Office response, the news that yet another law enforcement agency refused to hold any of its officers accountable for their wrong actions is infuriating and unacceptable.

“I don’t feel in any way that I was at fault for anything. I don’t think that that should have happened to me,” Dangond told El Tecolote. “I had never been assaulted before. And to be assaulted by someone who supposedly is there to make you feel safe, that was definitely a really traumatic experience.”

The Law Enforcement Code of Ethics, which is featured prominently on the San Francisco Deputy Sheriff’s Association’s website, reads: “As a Law Enforcement Officer, my fundamental duty is to serve mankind; to safeguard lives and property; to protect the innocent against deception, the weak against oppression or intimidation, and the peaceful against violence or disorder; and to respect the Constitutional rights of all men to liberty, equality and justice.”

It seems that Osha has forgotten that. Or perhaps the man accused of pulling a gun on someone during a traffic argument on Dec. 28, 2015 while in plainclothes, but who also ran for treasurer of the Deputy Sheriff’s Association in 2013, and won, never learned it in the first place.

“After all that we went through, going into that office and be questioned by the [deputies] on something that happened to us, and the time and energy that it took out of us, to get a letter that says basically what happened to you isn’t important enough for us to do anything about it, that’s definitely disappointing,” Dangond told El Tecolote.

Disappointing is an understatement. As journalists, when we err, we’re held accountable, and as citizens we demand law enforcement to do the same.