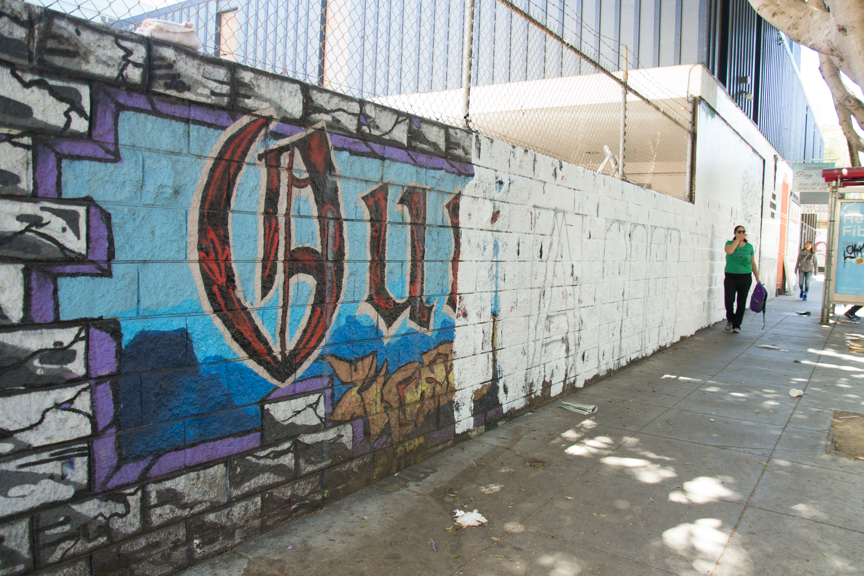 The Precita Eyes mural at the corner of 24th and Lucky streets—painted by neighborhood youth in 2015 as a response to gentrification—was literally whitewashed on June 2 by artists commissioned by the building’s new owner.

Painted on the side of the building at 2801 Folsom St. the mural depicting a calavera with the words “Our culture can’t be bought,” had been buffed beyond recognition with white paint, leaving only a sliver of its original form. The building’s new owner, and his hired artists, began painting over the mural without notifying Precita Eyes. The new design was intended to read: “Be a good person.”

The destruction of the current mural only stopped when concerned community members and Precita Eyes artists began gathering around it.

“I wanted something colorful on this, frankly. I’m a fan of colors—bright colors. This wall for me was way too dark,” said Ali Rismanchi, who arrived on scene when the crowd began to grow. Several community members, including Mission activist Nancy Pili Hernandez, told Rismanchi that whitewashing the mural was disrespectful to the neighborhood and to the youth who painted.

“I didn’t know I had to go through these processes… to redo the mural,” Rismanchi said, in his defense. ”At this time, it’s done… this wall is yours.  It’s the neighborhood’s. Make it colorful.”

But not everyone viewed was satisfied with his explanation.

“It’s just really shallow and empty to me, I think they were just trying to tell us what we wanted to hear,” said Max Marttila, one of the Precita Eyes coordinators who worked with youth on the original mural.

Precita Eyes muralist Carla Wojczuk was giving a mural tour at around 11:30 a.m. when she saw a group with rollers and paint supplies standing in front of the mural.

“And I said, ‘Hey you guys might want to wait on this. Because these are community murals and they’re also protected, like legally,’” said Wojczuk.

The artists, according to Wojczuk, deflected any wrongdoing and said that the building’s new owner instructed them to paint over it. Wojczuk left the mural to finish her tour, but came back to warn them again. After returning at 12:30 p.m., the crew had already started painting over the wall.

“The sad part is, I feel pretty regular about it, because this is kind of what’s going on in San Francisco,” said Marttila. “We really take pride in our murals. It means a lot more to us. It’s really the voice of the people, especially in a time like this, post-gentrification. We really need to keep what’s ours.”

Rismanchi said that he will involve the neighborhood in the creation of a new mural.

“I think the resolution is I give the wall back to the community, and they can do a new piece.”