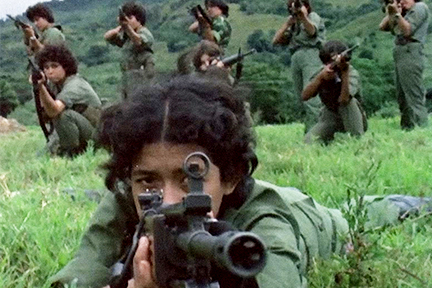 Those of you who are regular readers of my column know that I’ve taught at SF State for a couple years now. Since I began teaching in the College of Ethnic Studies back in the Spring of 2015, I’ve had the office next door to that of Daisy Zamora, a colleague of mine in the Latina/o Studies Department. I’m embarrassed to say that I only knew of Daisy in a vague sense, via statements I’d heard over the years such as: “She was involved in the ‘Revolucion,’” or “Did you know she was a Sandinista?” or my favorite, “Era una de las meras meras.”

I had no idea the extent of Daisy’s involvement in the Nicaraguan revolution, which will mark its 40-year anniversary this July. It should come as no surprised that I knew all about certain men of the revolution—Comandante 0, one of the more charismatic and showy figures of the revolution; Daniel Ortega, who’s appeal I still don’t quite understand; and Tomas Borge, who had about as much personality as a stale tortilla. As is often the case in periods of transformative struggle, certain figures and groups (women in particular) are overlooked, forgotten, or erased entirely from the story. “¡Las Sandinistas!” a documentary by Jenny Murray, is an attempt to recover the role of women in the Nicaraguan revolution. The film’s original title “Memoria Del Fuego,” which is also the title of Eduardo Galeano’s three-part history of Latin America, alludes to this.

“¡Las Sandinistas!” centers around the revolutionary life of Comandante Dora Maria Tellez, and her compañeras: Daisy, Sofia, Gioconda, Claudia, and Olga—all militants of the Frente Sandinista de Liberacion Nacional (FSLN). While the film does a straight-forward job of recapping some of the major events that marked the revolution, such as the taking of the National Palace and the capture of Leon (the first major city to fall, and under the leadership of none other than Dora Maria), its real strength is in the way it tells the story of the revolution from the perspective of these women. “We had to make the revolution inside the revolution” Daisy Zamora says in the film as she reflects on her time not only as a combatant but as the vice-minister of culture of the Sandinista government that took power in 1979. Listening to these women describe their experiences in combat, and their attempts to find their place within the revolution is where “¡Las Sandinistas!” transcends mere documentation to capture the raw emotion of history being made.

The film doesn’t shy away from criticism of Nicaraguan President Daniel Ortega and his wife, Rosario Murrillo, who just so happens to be his vice-president. The latter half of the film is undoubtedly influenced by the demonstrations that took place in early 2018 after the government announced social security “reforms” that would increase costs but cut benefits for Nicaraguans. It also revisits the 1998 accusations of rape made against Ortega by his step-daughter, perhaps drawing a parallel with the current #Metoo movement. The last part of the film may raise suspicion in some of us who have supported the Latin American left against repeated U.S. interventions (Marco Rubio tweeted out that he had met with leaders of the Nicaraguan university coalition in June of last year), but when the critiques of Ortega are coming from the former Sandinistas themselves they become harder to deny.

“¡Las Sandinistas!” has already picked up a number of awards, most notably SXSW’s 2018 “Special Jury Recognition,” and a shorter cut of the film had its broadcast premiere on PBS DocWorld on March 10, 2019. The timing is perfect as it coincides with the recognition of International Women’s Day on March 8. “¡Las Sandinistas!” wrestles to recover memory from amnesia, and by doing so allows history to speak rather than remain mute. This reason alone makes it essential watching for any Centroamericanista.

Despite what racists have told you, most Salvadorans aren’t in gangs