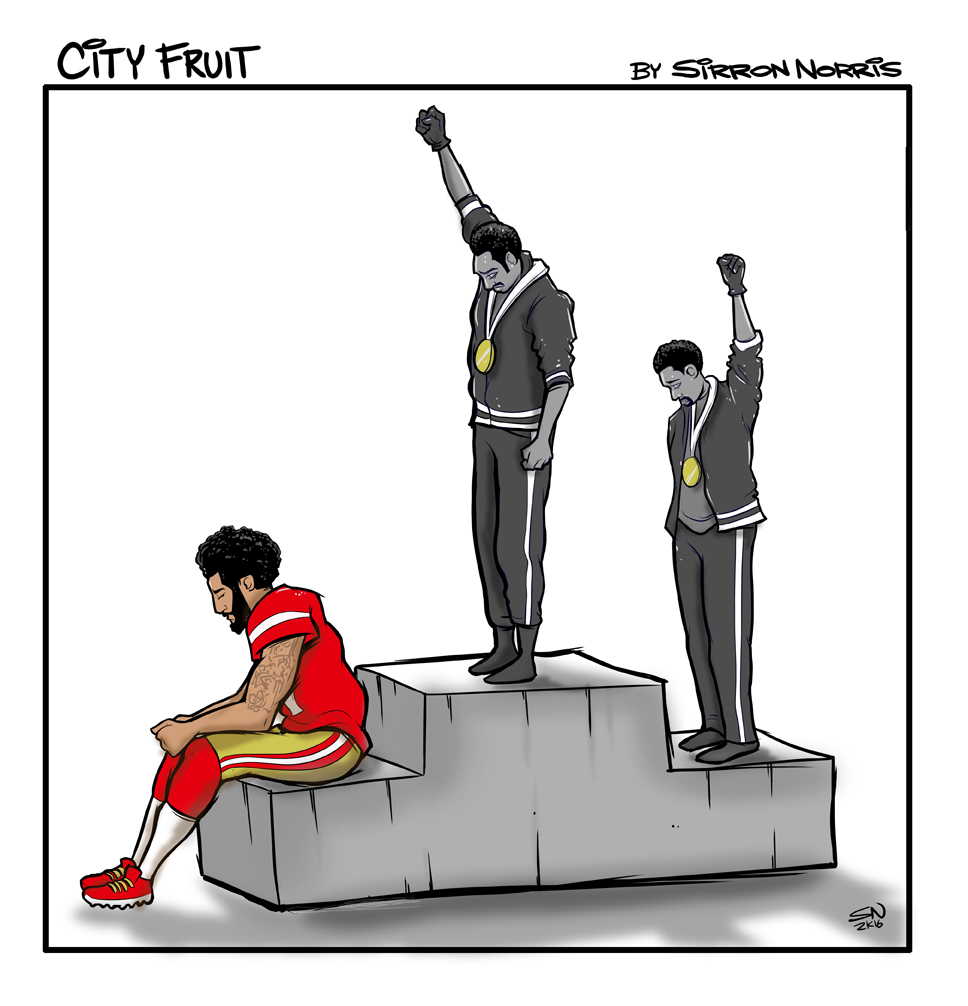 There has been an amazing array of commentaries, pro and con, concerning the recent actions of Colin Kaepernick, the quarterback of the Santa Clara 49ers—oops, I meant the San Francisco 49ers (sorry, my subconscious mind took over).

“To sit or not to sit?” that is the question concerning this young athlete, who is refusing to stand during the playing of the national anthem before his football games. “What a traitor!” many say. “What a hero!” others retort. Should Colin, previously widely criticized for speaking too little, be told now to “keep quiet and just play football?” You see, after not standing up for “the bombs bursting in air” (actual bombs, not long touchdown passes), Kaepernick augmented his sin by opening his mouth and coherently explaining that he would not salute the anthem of a country that treats large parts of its own population—especially African Americans and Latinos—with brutality, mainly via the police forces, those who are supposedly hired to serve and protect them.

Right away, the vitriol poured over Kaepernick, coming from various sources, including his old college coach, who said that Kaepernick’s cause was “selfish,” and the head of the San Francisco Police Officers Association, who accused the quarterback of being “naïve and insensitive toward police officers.”

Now, I will go back to the headline of this column: “You are paid to run, not to think.” To explain that title, I will draw from my personal experiences.

Years ago, in the mid-1960s, I arrived in California with a track and field scholarship, after winning the gold medal in the 1965 South American Championship 200 meters race, held in Río de Janeiro. I had the amazing fortune of landing in U.C. Berkeley in the midst of all the wonderful magical madness of the times.

The war in Vietnam was raging, the Black Panther Party was born, the women’s liberation front was getting stronger, the Civil Rights Movement of the late ‘50s and early ‘60s was adding issues to their agenda, such as the gay and lesbian fight for acceptance into the fabric of society. And the “Summer of Love” was… lovely. Racism was a reality behind everything. The same is true today, although many insist that by electing a mixed–race president (by the way, Kaepernick is also mixed-race) we in the United States now live in “a post-racial society.” The truth, today and yesterday, is that we don’t.

In 1968, in an interview by U.C. Berkeley’s student newspaper, The Daily Californian, I supported the condemnation of The Olympic Club—a New York institution that was organizing an upcoming track and field relay event at Madison Square Garden in New York City. I was set to compete in the event representing Berkeley in the mile-relay. It was in that capacity that I was asked to comment on the fact that the hosting Olympic Club did not allow African Americans as members.

Coming from Chile, I was a newcomer to the racial issues of the United States and—although my political awakening was a growing reality—I was careful not to say or do anything that might jeopardize my status in this country. Thus, I remember being very careful with my answers. Nevertheless, I could not go against what I thought: the discrimination against African Americans was wrong. The fact was that I got along famously with the black athletes. I discovered a lot of similarities between us, and they made me feel welcomed to this conflicted country with their loud banter and laughter. They were my first true friends on this land.

The day the article was published, I got some strange looks from my white teammates, as if they wanted to say something but they would not spit it out.

Confronting Racism in the Latino Discourse on the Protests

It was the head track coach who helped me to understand what was going on. He called me into his office and, after referring to the article, he declared: “Carlos, you were brought here to run. Not to think.”

I have never forgotten those words. I didn’t reply. I simply remained quiet, as my coach added something about me being, “a nice guy, perhaps a little too naïve to understand what was going on in the country.” I was just 20 years old, so I could not dispute the fact of being a little naïve. But I knew that I was right to stand up—or to sit—and to speak for my truth… even if my knees shook.

My particular incident was not a big, courageous, highly visible act—not like Kaepernick’s. Nevertheless, I have never forgotten it. It was an important lesson. Those words formed a phrase that became something that helped shape and strengthen my developing political awareness. I am proud of having found the courage to say what I thought.

Today, Kaepernick hears similar but much stronger words of criticism. He is called “naïve,” “insincere,” “unpatriotic,” “ignorant,” “a disgrace.” I strongly disagree. By sitting down during the playing of the Star-Spangled Banner, he has actually opened up a much-needed dialogue on various issues: race relations, the meaning of patriotism and the need to stand up for our principles.

Coaches and generals stand on the sidelines. It is young men and women actually who fight the risky fights. They deserve to be heard. Kaepernick sitting, like Rosa Parks sitting before him, is an extremely sane and courageous—even patriotic—act.

I love Sports…and I love Poetry