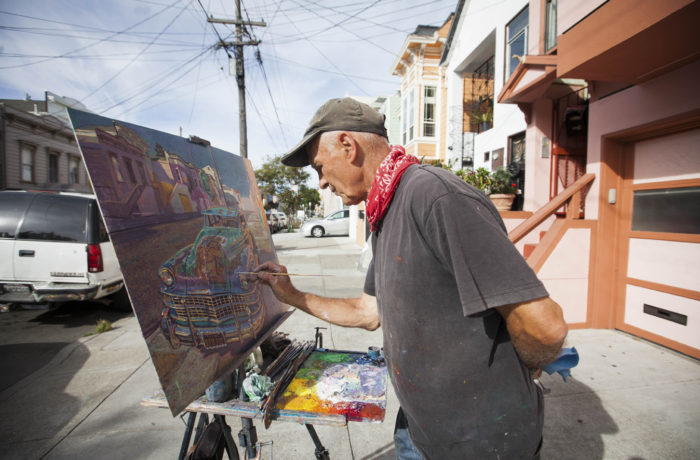 Anthony Holdsworth, an urban landscape painter and local artist, works on an oil painting of a lowrider with Florida Street scene on Florida Street near 26th Street in the Mission District, San Francisco on Thursday, Oct. 13, 2016. Photo: Ekevara Kitpowsong 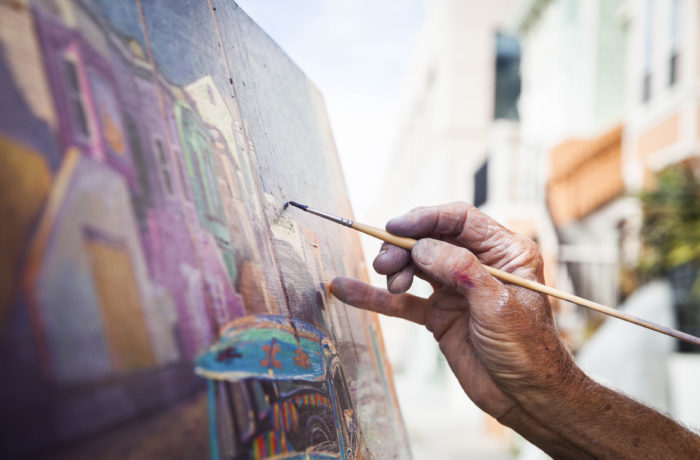 Anthony Holdsworth, an urban landscape painter and local artist works on an oil painting of a lowrider with Florida Street scene on Florida Street near 26th Street in the Mission District, San Francisco on Thursday, Oct. 13, 2016. Photo: Ekevara Kitpowsong 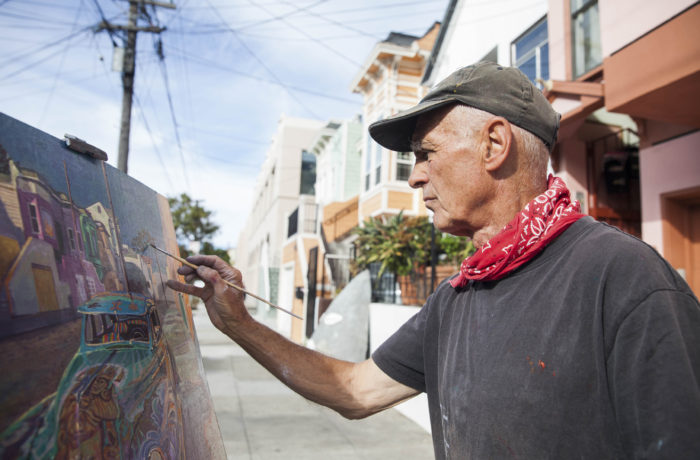 Anthony Holdsworth an urban landscape painter and local artist works on an oil painting of a lowrider with Florida Street scene on Florida Street near 26th Street in the Mission District, San Francisco on Thursday, Oct. 13, 2016. Photo: Ekevara Kitpowsong 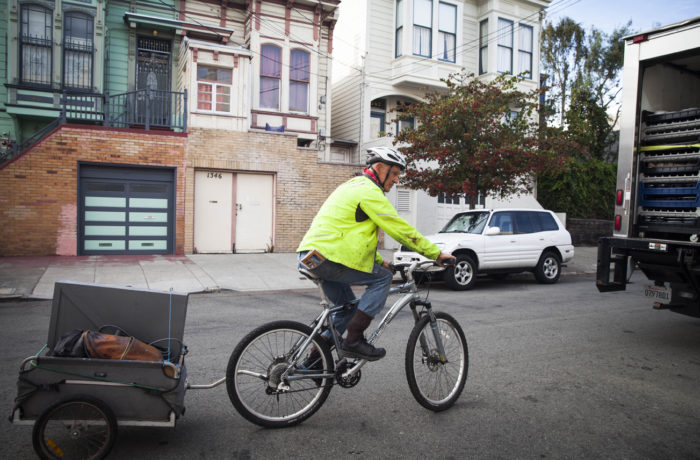 Anthony Holdsworth an urban landscape painter and local artist rides his bike with the container filled with his painting equipment, from first painting location to the second location, on Florida Street in the Mission District, San Francisco, Thursday, Oct. 13, 2016. Photo: Ekevara Kitpowsong 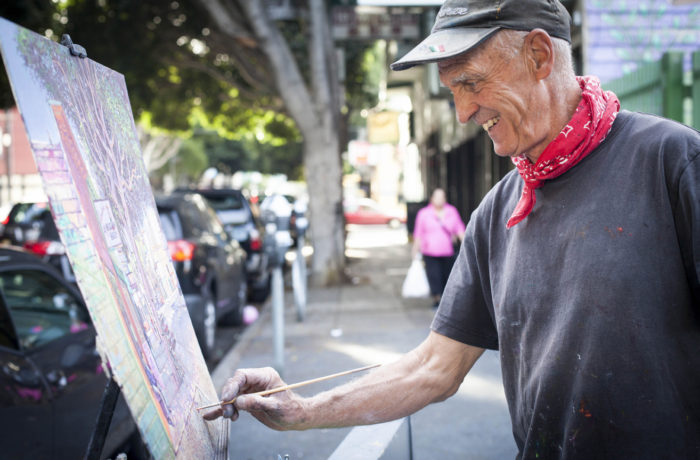 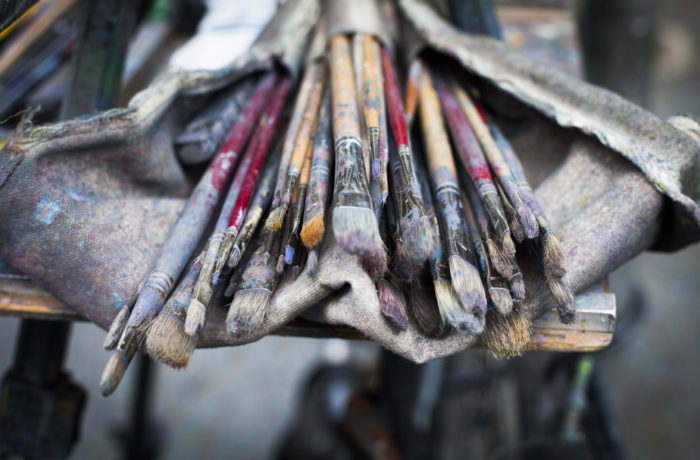 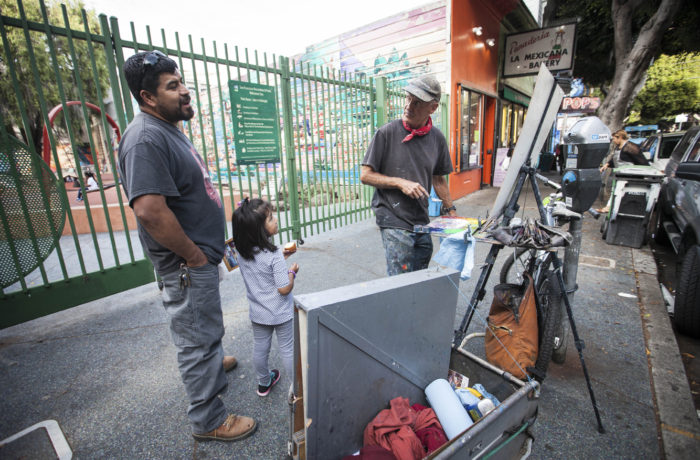 Antonio Vega, left, and his daughter Acitlali Vega, center, stop to watch and talk with Anthony Holdsworth an urban landscape painter and local artist while he is working on an oil painting of 24th Street scene on 24th Street near York Street in the Mission District, San Francisco on Thursday, Oct. 13, 2016. Photo: Ekevara Kitpowsong 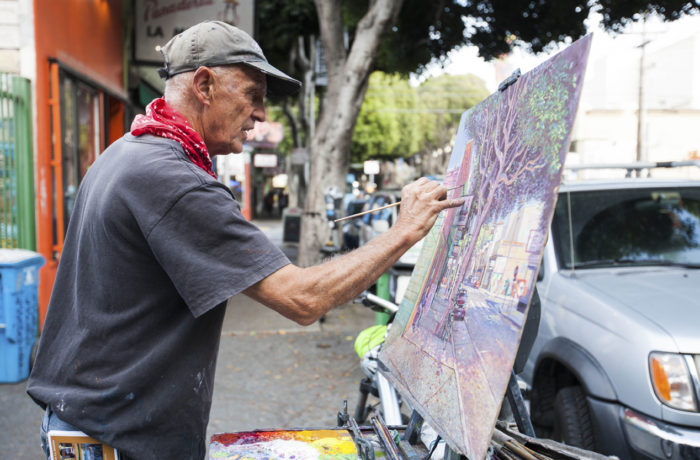 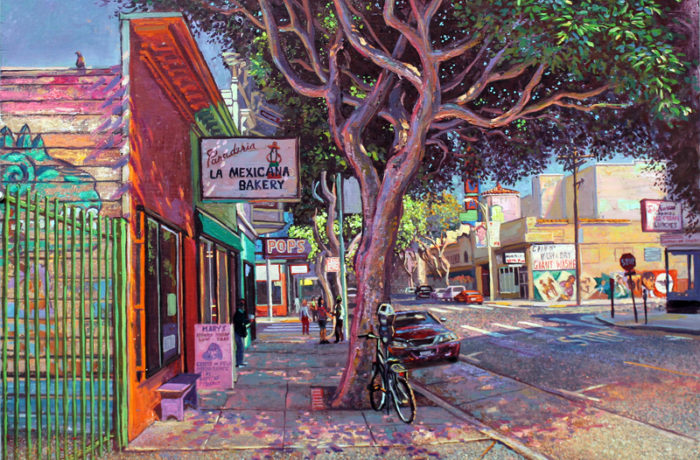 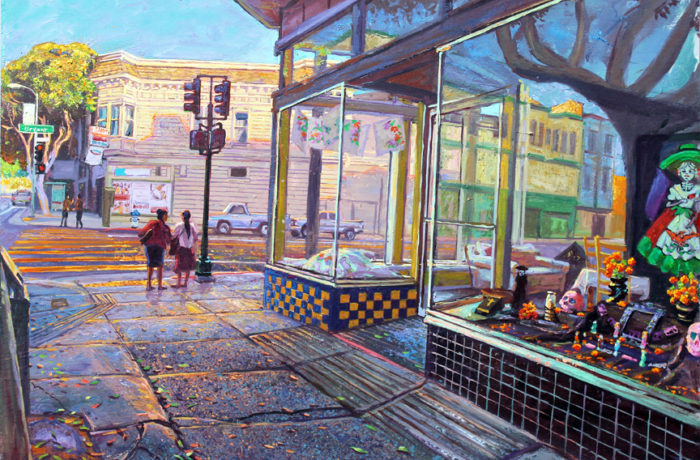 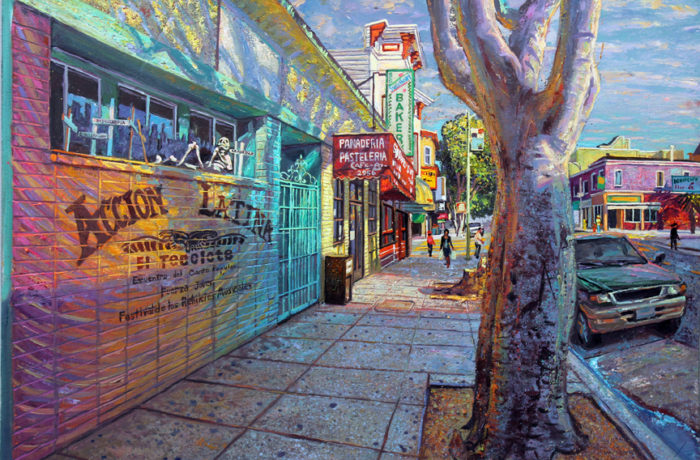 Almost every morning, Anthony Holdsworth takes a jog in Bernal Heights, returns to read the San Francisco Chronicle with his wife, and tends to his small vegetable garden. Then, around 11 a.m., he collects his equipment, slides it into his trailer, and rides his bike through the streets of the Mission to paint the Latin pulse of the community.

Holdsworth, who was born in the United Kingdom, has been fascinated by Latin culture—its vibrant art and colorful community—ever since he visited Florence, Italy in 1966, on his hitchhiking trip to Europe. He lived in Florence for nearly two years.

“What impressed me [in Florence] was the direct connection between the community and the art,” said Holdsworth. “And the way they worked together and had an influence on each other.”

In Italy, he painted countrysides—farmers plowing the land and changing livestock feed. But it wasn’t until he moved to a collective household in a West Oakland neighborhood, living there for nearly 12 years, that he started to street paint.

The streets, according to Holdsworth, contained much more information about the people, the society, the lifestyles and the culture. And it was in the so-called “ghetto” where he physically learned about the racism in the United States.

“That [living in West Oakland] was the education in what the U.S. is really about. I was intellectually aware but not personally [aware] of the racism and the fact that [the] ghetto is in some sense a prison.”

Living and painting in the ghetto, then painting in Nicaragua in 1974, and the indigenous people of Lake Patzcuaro in Mexico all had one thing in common: spectators stopping by and sharing interesting stories with Holdsworth.

In the beginning, Holdsworth didn’t know how to react. But over time, he learned to hold conversations with the bystanders even in his broken Spanish. Almost always, these people became a part of his paintings; sometimes these onlookers posed for him and sometimes their experiences became visible in his paintings.

“They are related in the sense that if I’ve someone who is telling me about the place, in a certain way they enter my painting,” he explained.

With his colorful palette, Holdsworth has stroked his brushes against canvases to depict the local cultures in Nicaragua, Mexico, Oakland, and now he is painting the Mission District to illustrate the neighborhood’s Latin touch.

Through his street painting in the Mission District, Holdsworth has become a familiar face in the neighborhood. Not only has he come to know the regulars of the community, but community members have also come to recognize him.

“I’ve seen Anthony painting for many years on the street,” said Roberto Hernandez, a housing activist and head of the San Francisco Lowrider Council. “I love how he just stands on the corner and paints our neighborhood.”

Holdsworth, who has been painting in the Mission for about four years, has seen that vibrant culture—music, art, and graphics—of the community vanish slowly. And he uses his art to raise awareness of these changes.

In the past, he has painted buildings that people have been evicted from, representing the recent wave of gentrification. He also has a hand in the awareness of lowrider culture.

“By him painting about the lowriding culture, he has documented our stories,” said Hernandez.

Holdsworth is showcasing his experience of Mexico, the streets of the Mission District and the visible link between the two places in his upcoming exhibition titled “De las Calles de Mexico a las Calles de la Misión,” set to premier at the Juan R. Fuentes Gallery at Acción Latina. The opening reception is set for Oct. 22, from 6 p.m. to 8 p.m., and the artwork will be on display through Nov. 26.

“The show is making a link between the mother culture and its visibility here in the Mission streets, which for me is one of the greatest treasures in the Mission,” Holdsworth said. “You get the glimpses of not just Mexico but these other cultures of Latin America.”

Looking for Indio in the Mission