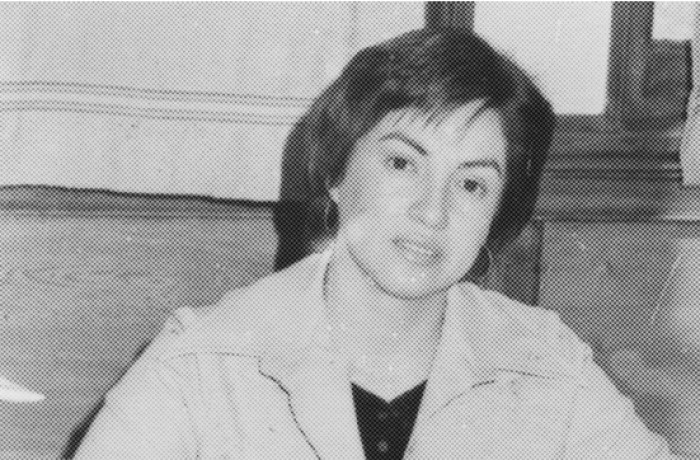 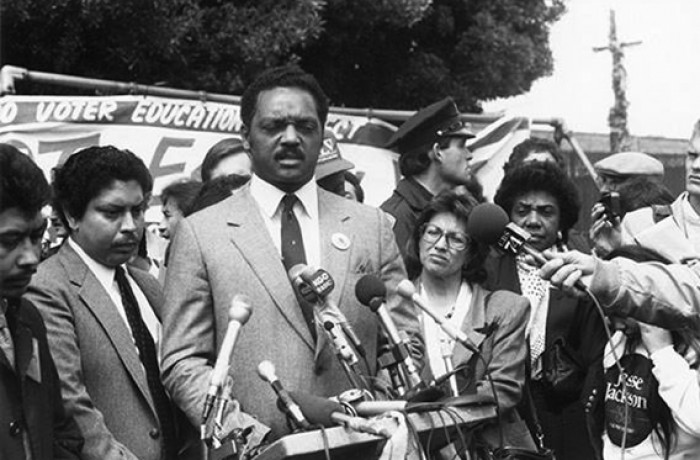 Rosario Anaya stands to the right of Jesse Jackson in San Francisco during the “Latinos for Jackson” for president campaign in 1988. Courtesy San Francisco Latino Historical Society

Rosario Anaya, the long-time executive director of Mission Language and Vocational School (MLVS), died of lung cancer on Wednesday morning, Aug. 5, 2015. She was 70. During her 42-year administration at the school, thousands of primarily Spanish language immigrants gained the vocational skills necessary to compete in the workforce.

Born on Oct.7, 1944 in Cochabamba, Bolivia, Anaya arrived in the United States in the early 1960s. She earned her bachelor’s degree in Public Administration and a Master’s degree in Counseling and Psychology from the University of San Francisco.

Within a few years, Anaya established herself within the Latino community, dedicating her life to championing social justice for the disenfranchised.

By the late 1960s, she was involved with the Mission Coalition Organization, a multiracial network of neighborhood agencies and individuals that demanded jobs, housing and educational reform.

In 1973 she became the executive director of MLVS, a nonprofit community-based agency that provides English as a Second Language classes along side vocational and computer training.

“I remember her saying, ‘There’s always a way to get it done.’ She never gave up. She was always fighting for us Latinos,” said Elsy Tadeo, who enrolled in one of MLVS’s training programs in 1972. “She was a kind person who cared about helping people.”

Daniel Brajkovich, current interim director of MLVS, met Anaya in the late 1990s when he came onboard as the school’s program manager.

“What drove Rosario was a sense of community. Even in this difficult political landscape she continued to fight for the underserved communities,” Brajkovich said. “My enduring image of her is of being noble, even-handed and fair. Justice emanated from her.”

Among her many accomplishments at MLVS is the purchase of the school’s 50,000 square foot facility at 19th and Florida streets, and the extensive network of ties with private industry, which continues to support career pipelines for the 300 students who graduate annually. Brajkovich said that Anaya’s visionary perspective was evident in the conceptualization and establishment of the school’s successful Latino Cuisine Culinary Academy, which provides immigrant workers with expanded career options in the food industry.

Although MLVS was the focal point of her day-to-day work, her commitment to the Latino community spread far beyond the walls of the school and by the 1980s, Anaya had become an invaluable source of support for a variety of campaigns.

Eva Royale, director of the city’s Cesar E. Chavez Parade and Festival, recalls a long history of collaboration with Anaya, which began in the 1980s with the San Francisco Latino Voter Registration and Education Project, where Anaya registered voters, walked precincts and recruited volunteers. Anaya was also an active participant in Jesse Jackson’s Rainbow Coalition and Latinos for Jackson during his 1984 and 1988 presidential campaigns.

Royale said that Anaya was a life-long supporter of the United Farm Workers union. Her advocacy included: organizing food caravans from San Francisco to the UFW’s headquarters in Delano; demanding justice for UFW co-founder Dolores Huerta when she was seriously injured in 1988 by a San Francisco police officer during an anti-George H.W. Bush demonstration; participation in the campaign to rename Army Street in honor of Cesar Chavez; and helping found the annual Cesar E. Chavez Holiday Parade and Festival, now in its 15th year. In addition, Anaya made MLVS the ongoing host for the annual Cesar E. Chavez Labor Breakfast.

“Rosario Anaya was an inspiration and true community leader. She was honest, kind, and hardworking,” said Royale. “I feel truly blessed to have known and worked with Rosario Anaya, she was my friend and inspiration.”

Children were another focus for Anaya, who was appointed by the late mayor George Moscone to the San Francisco Board of Education in the late 1970s. In 1978 she ran for a full four-year term and not only garnered the highest number of votes but also became the first Latina ever elected to city office. She successfully ran again in 1982 and 1986, serving as school board president twice.

For the last four decades, Anaya has sat on numerous boards, committees and commissions including New America Media and the San Francisco Redevelopment Commission. Yet despite her accomplishments, this fierce warrior for the disenfranchised was a humble person.

“Those of us who were fortunate enough to know Rosario will remember her enduring class, the dignity in which she fought, and her nonstop, unapologetic advocacy for some of the most at-risk populations in the Bay Area,” the MLVS said in a statement.

In addition to a private family service, the MLVS board of directors is working on a public memorial to honor the work and life of Anaya.

Anaya’s family has established the Rosario Anaya Scholarship Fund for Latinos and Latinas in the Mission in her honor. Checks may be mailed to MLVS at 2929 19th Street, San Francisco, CA 94110.